In Primorye, began the teaching of the Marines

October 13 2015
13
At the “Clerk” and “Bamburovo” test sites in Primorye, a tactical brigade tactic of the naval infantry of the Pacific Fleet was launched, during which the landing of the naval and airborne forces with firing exercises will be carried out, RIA News message of the representative of the Supreme Military District Roman Martov. 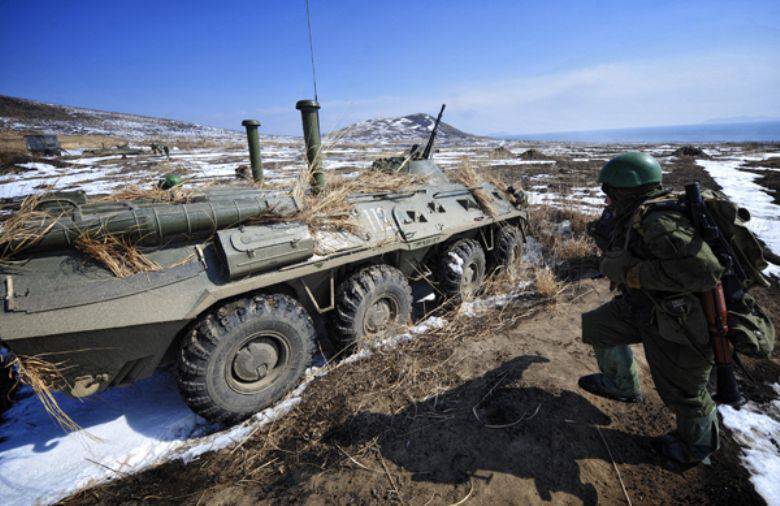 “At the Bamburovo training ground, the black berets today conducted a complex of firing in the composition of subunits, from small arms and combat vehicles. During the brigade tactical exercises at the Clerk training ground, the 15 marines of October will work out the tasks of breaking through the anti-air defense of the conditional enemy, delivering simultaneous strikes on the defensive forces from the sea, the air and the coast, and creating bridgeheads on the reconquered coast, ”the officer said.

The first episode of the maneuvers will be the landing of an An-26 aircraft. “In a given area in the rear of the“ enemy ”will operate more than a hundred people with mortar weapons. Then, on the coastline with the help of high-speed landing boats and a Mi-8 helicopter, they will land groups of the barrage of marine engineering units. At the same time, the enemy will be attacked by Su-25 attack aircraft and army Ka-52 helicopters aviation"He said.

“The main forces of the amphibious assault on the unequipped coast will be delivered by large landing ships. In total, more than 1 thousands of troops will take part in the exercise. More than 80 units of combat and special equipment, around 10 of combat ships and support ships, airplanes and helicopters of military transport, army and ground attack aviation will be involved, ”Martov informed.

We are in Yandex Zen
In Primorye, the marines of the Pacific Fleet will conduct tactical exercises
Russian military personnel landed on the Baltic coast as part of the exercises ZVO
13 comments
Information
Dear reader, to leave comments on the publication, you must to register.