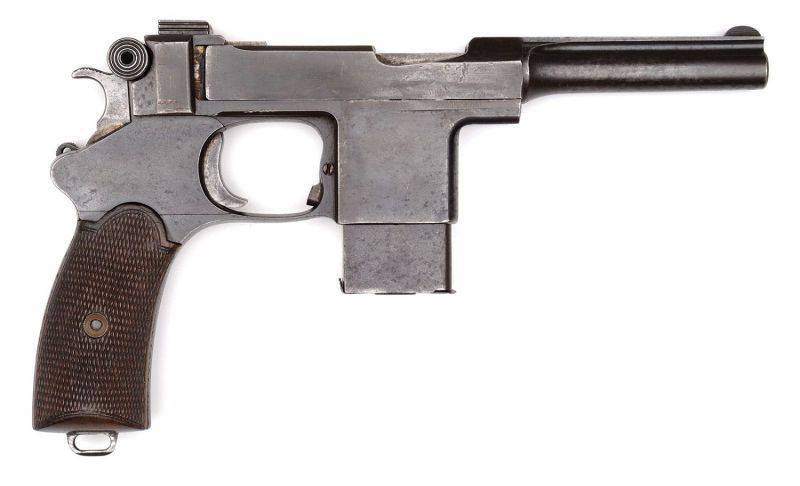 Dividing design activities into two separate areas: the development of a pistol for the civilian market — the Bergmann Simplex and the military pistol — the Bergmann Mars Theodore Bergmann finally achieved success and received the first military order for his weapon.

Gun Bergmann Mars (Bergmann Mars) has external features that resemble the weapon of a potential competitor - Mauser K-96. However, this is only a superficial resemblance, the design of these pistols varies significantly among themselves. 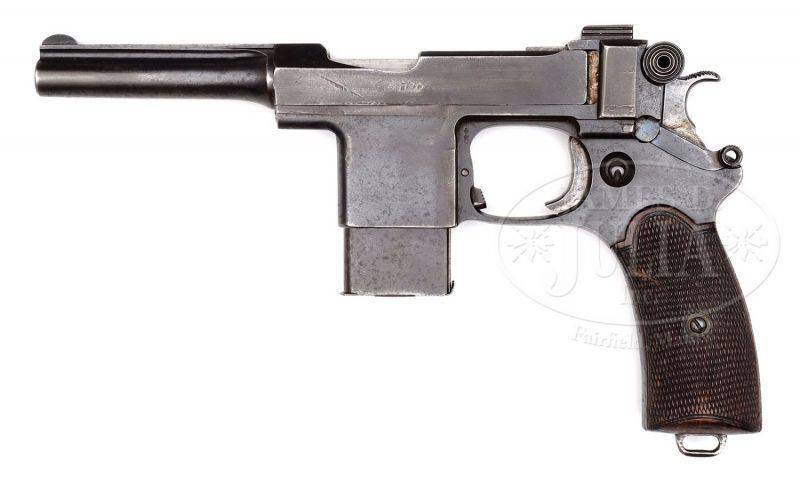 Pistol Bergmann Mars is a major modernization of the early designs of Louis Schmeisser and Theodor Bergmann. At the same time, the recognizable contours of weapons and early design developments were preserved: the placement of a two-row magazine in front of the trigger guard, the presence of a receiver, automation using a short barrel stroke, a simple firing mechanism, as in previous pistols, the return spring is located inside the bolt around the slender drummer. 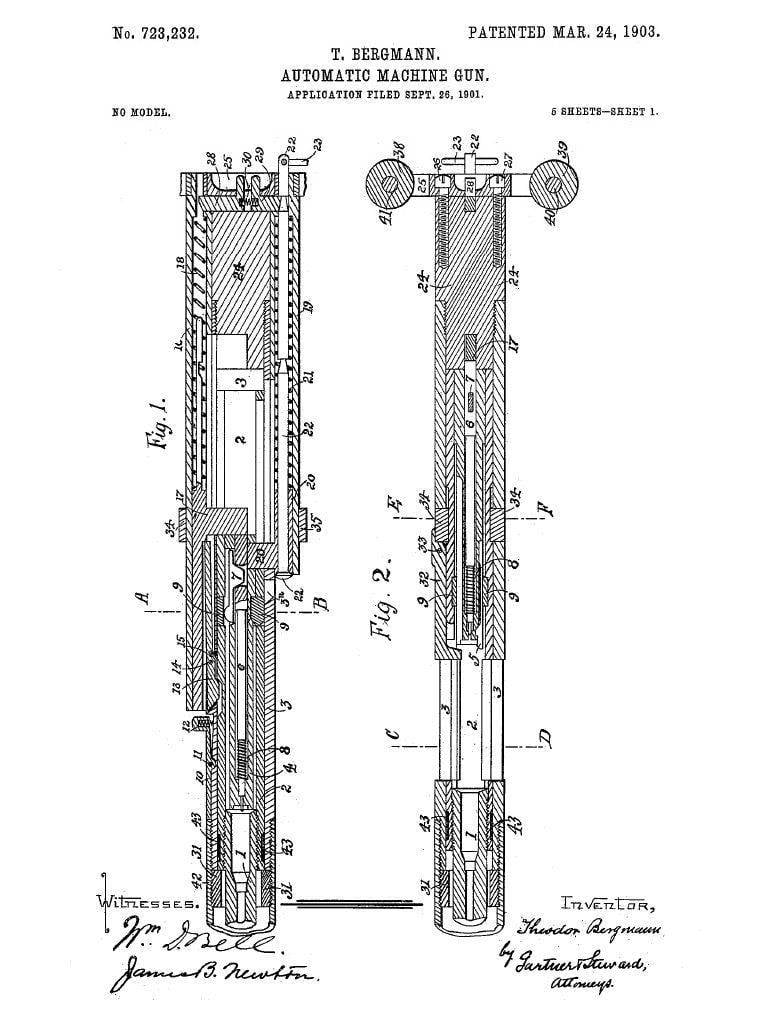 However, the gun has significant differences from the early models. For example, the pistol locking mechanism of the Bergmann Mars uses a vertical movement of the locking wedge. Initially, this locking system was developed by Louis Schmeisser for heavy machine guns and patented in the name of Bergmann. Here is one of the pages of the graphic part of the patent number 723 232 from 24 March 1903 of the year. This new locking system was cheaper from a manufacturing point of view and more reliable than the side locking used in the Bergmann pistols of the 1897 model range of the year. 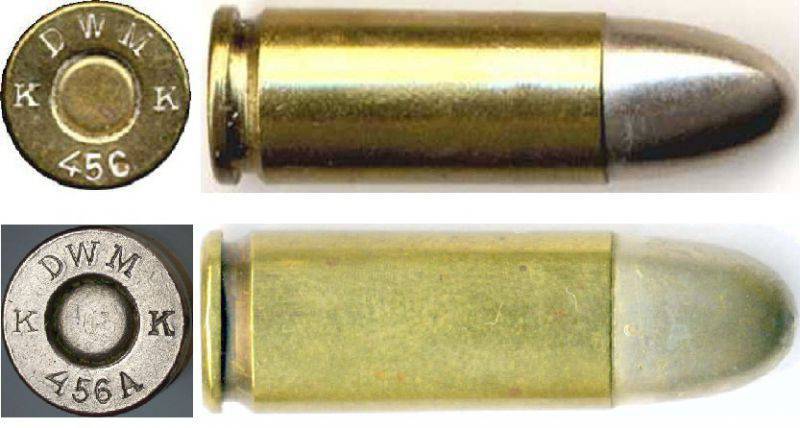 For the Bergmann Mars pistol, the powerful 9 mm Bergmann cartridge (9x23mm Bergmann) was developed. Currently, a cartridge with similar linear characteristics is known as 9 mm Largo. Prototypes of the Bergmann Mars pistol were made for 7.8 mm Bergmann caliber cartridges, as well as new 10 mm and 11.35 mm cartridges. Especially for the American market was made a pistol chambered for 45 ACP. The purpose of the experiments with the change of caliber was the desire to please potential military customers in the UK, USA and Europe. 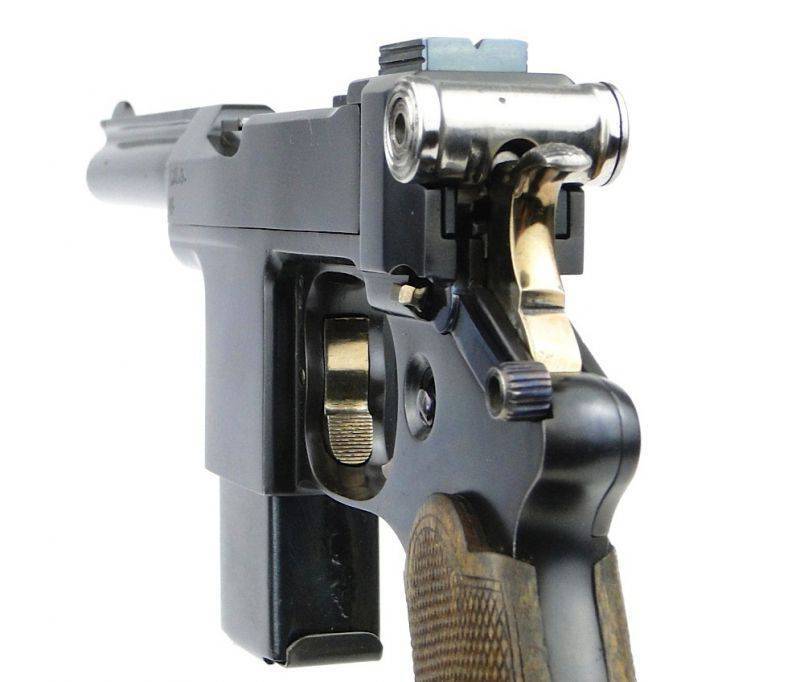 The new Bergmann pistol has entered the commercial market under the name of Bergmann Mars 1903 model of the year (Bergmann Mars M 1903). The weapon consists of a frame with a handle, a barrel with a receiver, a bolt, parts of a firing mechanism and a magazine. The magazine release button is located on the inside of the trigger guard. The cheeks of the handle are wooden, made of walnut, the cheeks have a diamond-shaped notch. At the bottom of the handle there is a rectangular untabka for a pistol strap. 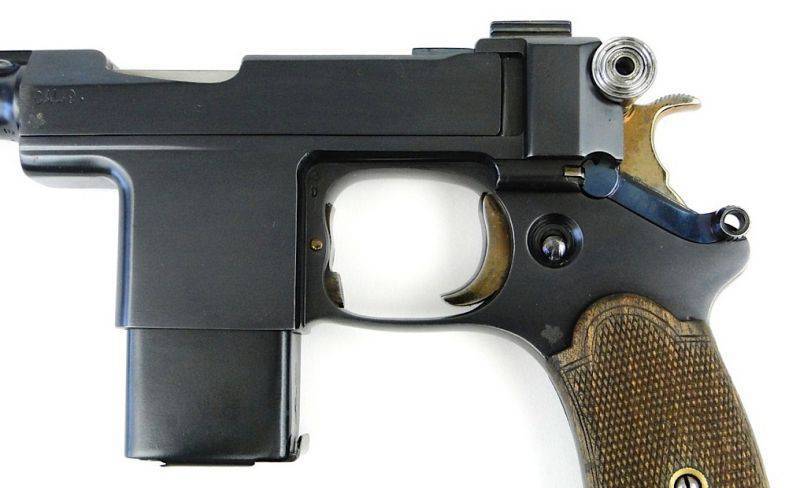 At the top of the pistol bolt Bergmann Mars ejector placed. On the left, a protruding locking wedge is visible. When the bolt is in the extreme forward position, the locking wedge protrudes up above the receiver. 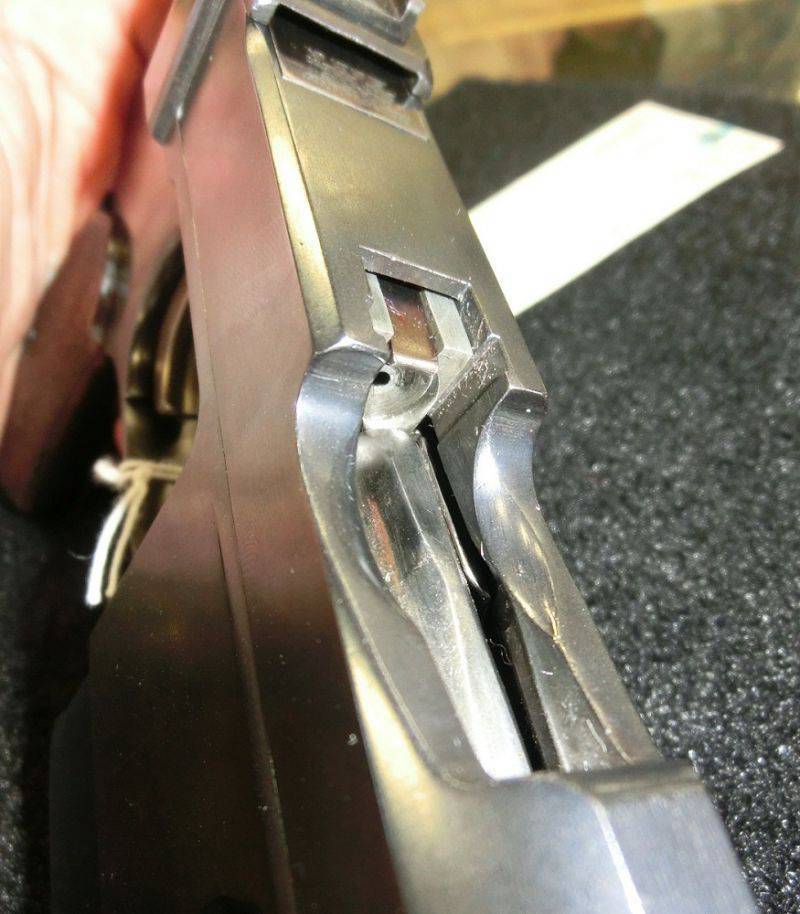 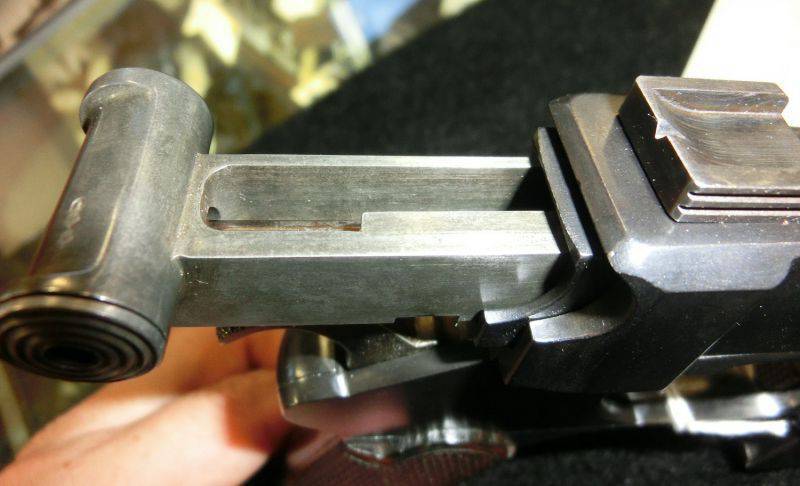 After tripping, only the bolt moves to the rearmost position under the influence of the residual recoil energy. When moving back, the sleeve is removed through the upper window in the receiver and the trigger is cocked. 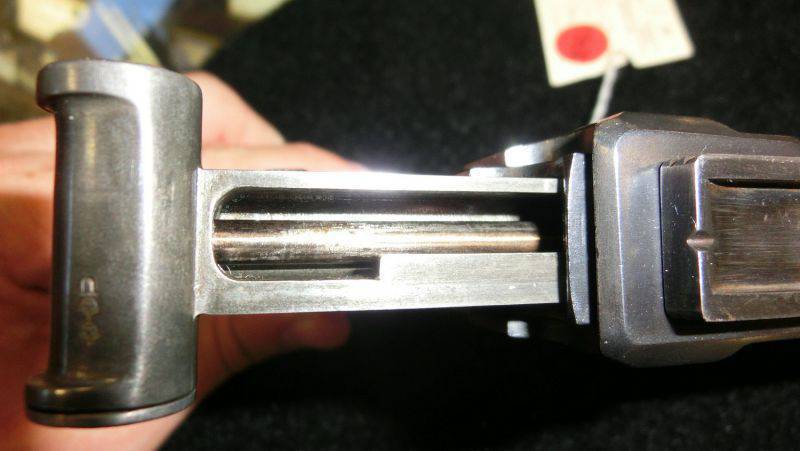 After reaching the rearmost position, the bolt under the action of the return spring begins to move forward and feeds the next cartridge from the magazine to the chamber. 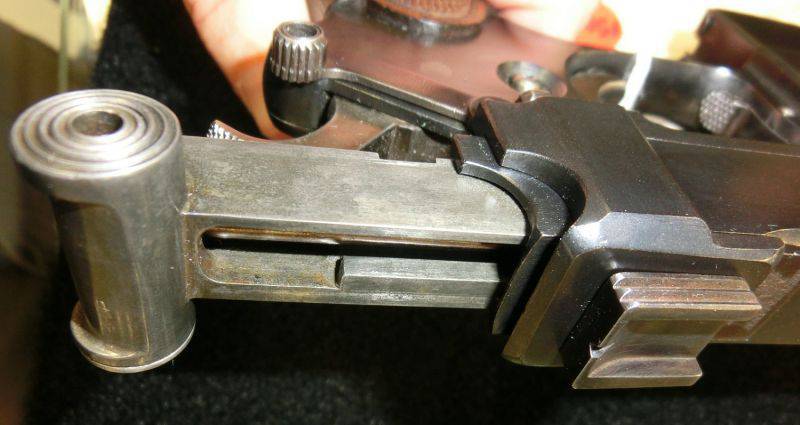 For the convenience of cocking the valve in its rear part, a handle with side grippers is made of a round shape with annular grooves. 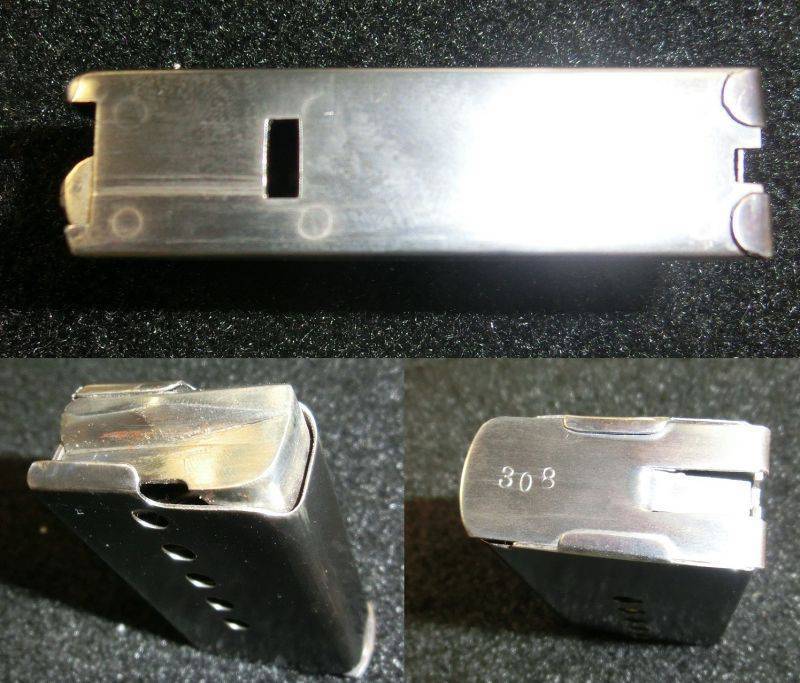 The pistol shop Bergmann Mars is box-shaped, detachable with a double-row arrangement of cartridges. Hole for fixing the store with a latch located on the back of the store. In the side walls of the store holes are made to control the availability of ammunition. On the bottom of the store marked the factory number of weapons. In the case of early pistols, the magazine is designed for 6 cartridges, and later on 10 cartridges. 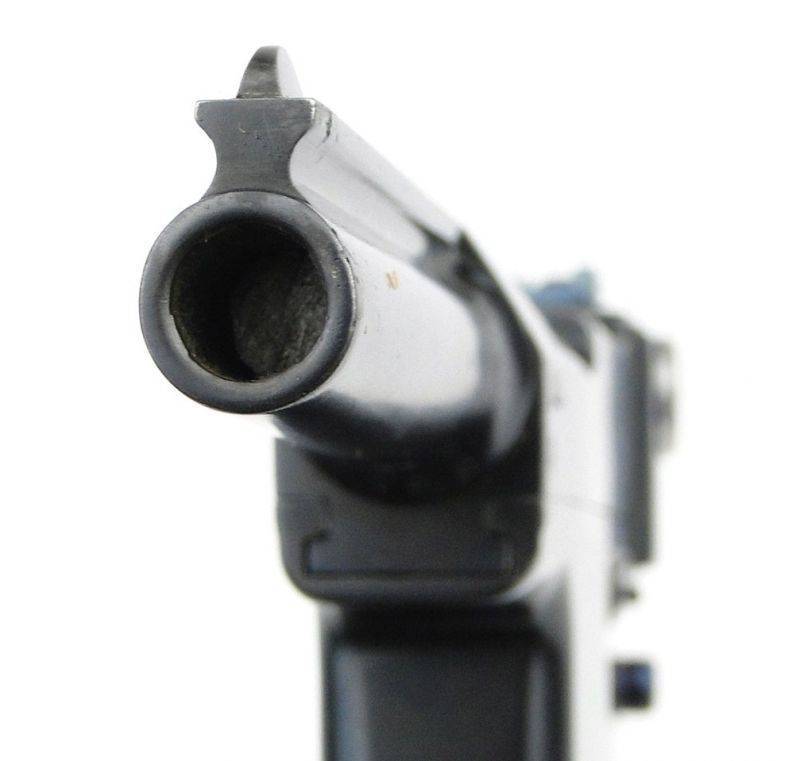 The gun Bergmann Mars Model 1903, the barrel has a length of 108 mm with four right-inclined rifling. A bar with a semicircular front sight is made above the barrel. 908 pistol gram weight. 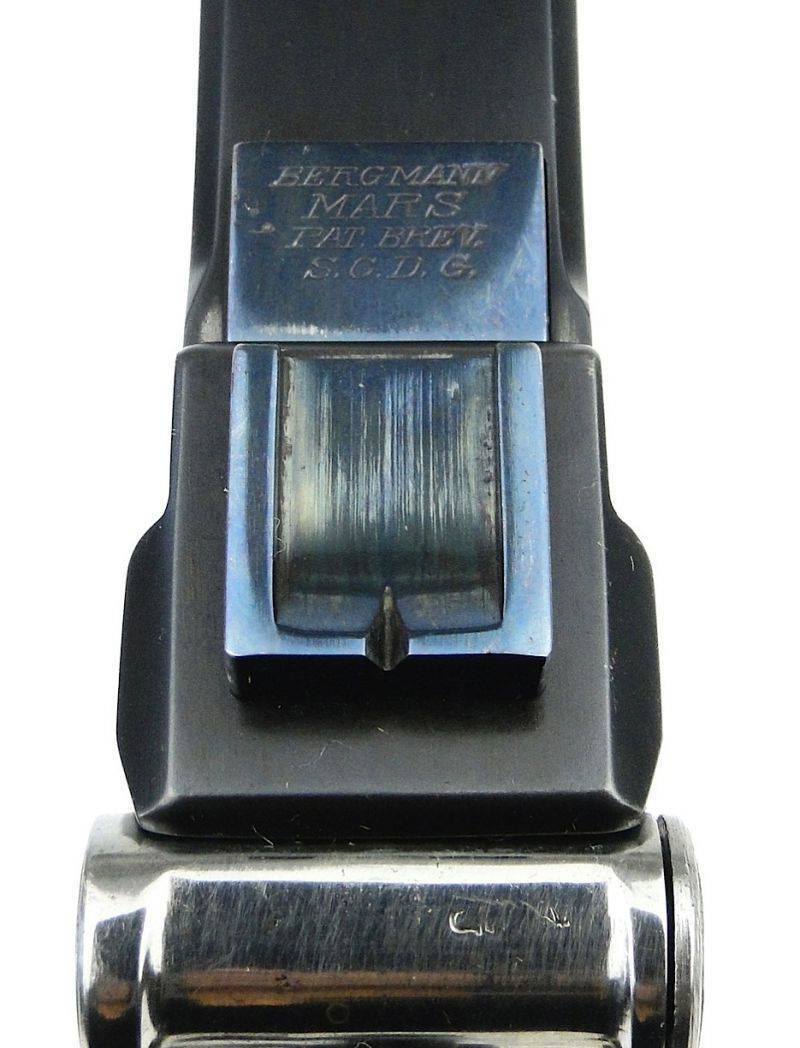 Pistol gun mounted on a fixed part of the receiver. In the upper part of the locking block, four lines of text are marked “BERGMANN / MARS / PAT. BREV. / SGDG »

The marking on the locking block may be different: “MARS / PAT. BREV. / SGDG. In the upper part of the receiver and the barrel at the chamber there are stamps in the form of the letter “U” under the two crowns. 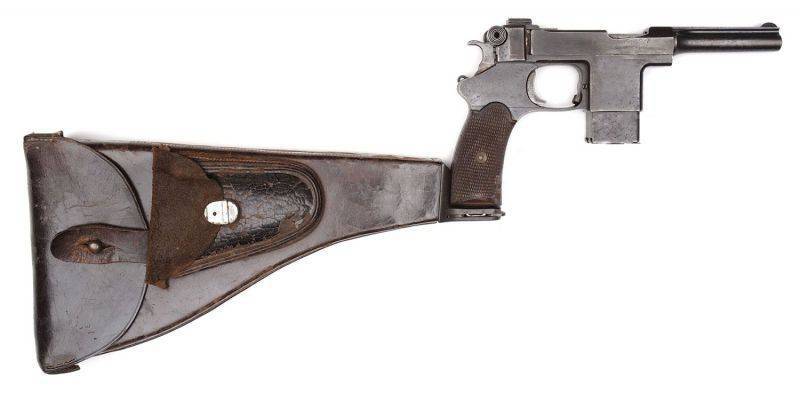 Pistol Bergmann Mars is a typical army pistol. Especially for him was developed a special holster-butt, which was attached to the bottom of the handle. 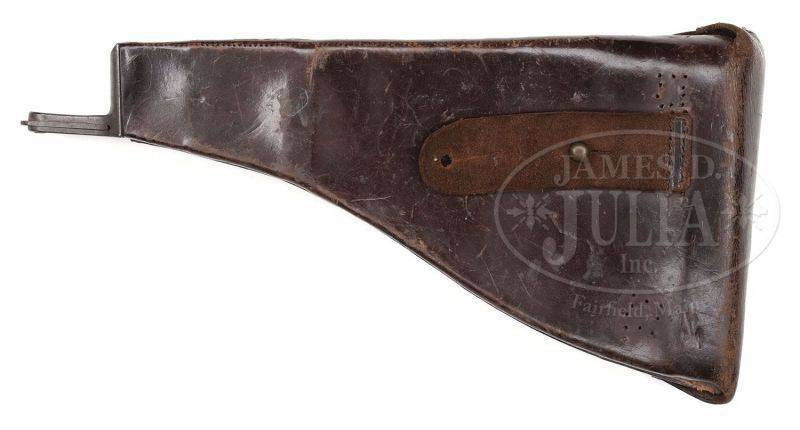 Finally, after repeated tests of the 5 of September of the 1905 of the year, the Spanish government placed an order for the 3000 9-mm pistols of Bergmann Mars. This was probably the first major success of the entrepreneur. Pistols of Bergmann at that time were produced in small quantities at their own plant in Gaggenau, and the main production was placed with the subcontractor Schilling in Suhl. In 1904, the company of Schilling is bought up by Heinrich Crigoff, who soon breaks off a contract with Bergmanns Industriewerke. Between 1905 and 1908, Theodore Bergmann is looking for a new contractor for the manufacture of pistols and not finding the right enterprise, he has to sell his Spanish order to Anciens Établissements Pieper (AEP) from the Belgian city of Herstal. 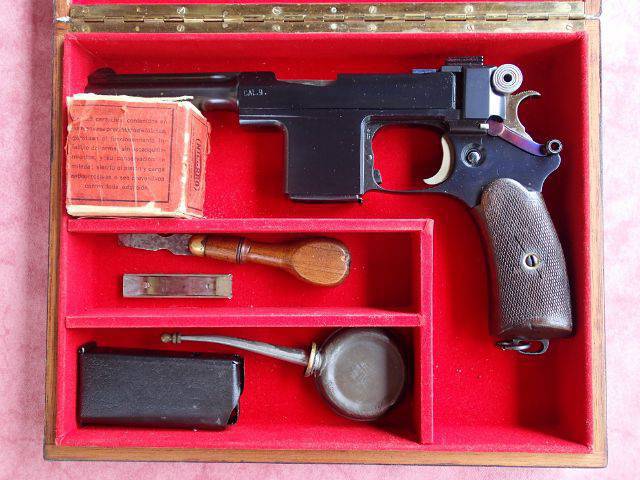 According to approximate data, a Bergmann Mars pistol 1000 of the order was made, after which the gun was modernized and it began to be produced under the Bergman Bayard label. Pistols Bergmann Mars M 1903 are not often found at gun auctions, so their cost is quite high. October 16 2013 gun Bergmann Mars, together with a holster-butt at one of the gun auctions was sold for 10 000 dollars.

We are in Yandex Zen
Pistol Bergmann Simplex (Bergmann Simplex) and its variants
Theodore Bergmann's Early Pistols: Bergmann Model 1893, Bergmann No. XXUMX
13 comments
Information
Dear reader, to leave comments on the publication, you must to register.