Almaz-Antey published the results of field experiments that determine the cause and those responsible for the crash of MH-17. The West has tensed ...

October 13 2015
219
Russian concern "Almaz-Antey" (OJSC Concern Air Defense "Almaz - Antey"), ahead of the so-called international investigative team (in common - “Dutch experts”), presented a report on the results of a full-scale experiment, which allows to draw final conclusions about what was the main cause of the crash of a Boeing-777 Malaysian airline. The disaster, as is known, took place on July 17 2014, near the village of Hrabovo (Donetsk region). To investigate the causes of the catastrophe, a group of international experts was formed, where, for some reason, they decided not to include Russian specialists, although in Ukraine and in the West (simultaneously with the fall of Boeing) they called Russia “the culprit of the tragedy”.


The Almaz-Antey Concern presented a detailed report on the results of the experiment, which (report), by definition, must be fully presented so that the reader can get acquainted with the data of professional Russian designers. The experiment itself looks more than impressive, and its results in this regard can be called not just an expert opinion, but an embodiment of objectivity and professional approach to business.

So, the text of the statement from the official representative of "Almaz-Antey":

The purpose of the field experiment was to confirm or refute the results of the Almaz-Antey report presented at the June 2 press conference. To test their own theoretical conclusions, a series of tests was carried out.

The first of them was held in late July. In the form of the fuselage were put up iron shields and special traps, catching striking elements, as well as metal shields, imitating the left engine. The missile warhead was undermined at an angle, as if the missile was heading for an airplane from the Zaroshchenskoye area. The fragment field obtained in the course of the experiment was then programmatically superimposed on the Boeing-777 model. As a result, damage similar to those found on the Malaysian Boeing was recorded. The calculations of "Almaz-Antey" were confirmed.

The second phase of the test was 7 October.

It was already a full-scale natural experiment. The goal was to check the version announced in the preliminary report of the international commission that the rocket was launched from the Snezhnoye area. For this, the Il-86 retired aircraft was purchased, which is most suitable for aerodynamic, technical, physical, and a variety of other parameters, as similar in design to the Boeing-777 fuselage.

The supercomputer processed more than 14 of millions of possible variants, the parameters of compensation of the dynamic and static position of objects - the rocket and the aircraft were determined. The 9М38М1 missile was undermined with a 9H314M warhead. As a result of the experiment, a preliminary version of the international commission that the launch was carried out from the Snezhniy area was disproved, since the nature of the damage to the aircraft at such angles of missile approach was quite different from what we see on the Boeing’s fuselage in reality.

Recall that the main impact of the striking elements was on the left side of the Malaysian Boeing - the cockpit, the left wing, the left engine and the left tail section. During the experiment conducted on the basis of data from an international commission, IL-86 did not receive damage to the left engine at all. The main concentration of damaging elements - the so-called "scalpel" - passed through the cabin, which eliminates the preservation of its right part intact. Thus, we have to admit that the rocket could not be sent to the Boeing from the village of Snezhnoye. This, in turn, completely refutes the version of the international commission to investigate the disaster.

According to the preliminary report of the international commission, the Malaysian aircraft was shot down by the 9М38М1 rocket, which includes striking elements - "I-beams". In the course of the field experiment, Almaz-Antey used the 86М9М38 with “I-beams” modification to undermine the Il-1 aircraft, since an international commission insists on this version. A characteristic feature of the undermining of the warhead of the 9М38М1 rocket is the formation of two fronts of striking elements. In the first, lighter fragments, and in the second - a heavy fraction of “I-beams” with maximum kinetic energy. Damage remaining on the body as a result of hitting the "I-beam" has a shape that can be called a butterfly. It is important to note that the earlier version of the 9М38 rocket does not incorporate "I-beams", its damaging elements leave damages in the form of parallelepipeds. In Soviet times, 9М38 missiles were supplied to Ukraine. Accurate data on the number of such ammunition from the Ukrainian army to date have not been preserved. It is important to emphasize that the 9М38 missiles in service with Russia are not worth it - since 1986, such missiles have not been delivered to the army, the last one expired in 2011.

During the experiment, on the body of the aircraft after the rocket exploded, a lot of butterfly-shaped inlets were found, these are traces of the "I-beams". However, it is known that no butterfly-shaped holes were found on the body of the downed Malaysian Boeing, damage in the shape of a “parallelepiped” prevailed, which can inflict damage to missiles of the previous generation 9М38. 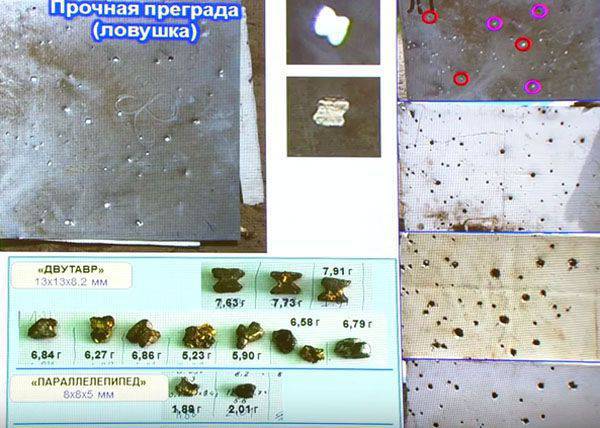 Thus, the field experiment not only refutes the Dutch version that the rocket was launched from Snezhniy, but also the thesis that the shot was fired using 9М38М1 munition.

A subtle hint from Almaz-Antey specialists that it would be nice for “Dutch specialists” to repeat the geometry school course before making statements about the direction of hitting the plane:

In preparation for the full-scale experiment, the Concern was placed in a very tight time frame. It was necessary to solve a whole range of problems - from the search for a decommissioned aircraft to logistics issues, it was necessary to choose a site for the experiment. Opportunities to purchase Boeing-777, taking into account the objective factors - logistics and time constraints - just did not exist. However, the fuselage of the Il-86 aircraft is as a whole, as well as aerodynamic, technical, physical, and a number of other parameters affecting the purity of the experiment, similar in design and basic parameters to the Boeing-777 fuselage. Taking into account all these features, after consulting with specialists, the Concern management decided to purchase an Il-86 aircraft for the experiment.

The 9H314М warhead for the first phase of the field experiment and the 9М38М1 rocket assembly for its second phase - a full-scale field experiment - were obtained by the Concern from the presence of the Russian Ministry of Defense. Almaz-Antey specialists prepared the rocket for the experiment in such a way that fully all the characteristics of the product, including the status of the squibs and other parameters, fully comply with the 40 second rocket flight. The event was attended by experts and experts of the Concern, including the Dolgoprudny Research and Production Enterprise, as well as the VV Bakhirev State Research Institute of Mechanical Engineering and the Central Research Institute of Air Forces of the Russian Defense Ministry.

A video that puts dots on “i” on the question of what hit the Malaysian airliner and where it was hit from.

The results of a full-scale experiment showed that a blow was struck from the area of ​​the settlement of Zaroshchenskoye, where the active “Buk” air defense system of Ukraine was located.

The professionalism with which representatives of the Russian manufacturer of military equipment approached and published data on the direction of the strike on the airliner and the establishment of real ammunition that led 17 last July to the death of 298 people, made even the clearly Russophobian publications scratch their heads. Thus, a report was published on CNN, in which experts stated that the press conference of Almaz-Antey specialists and the data presented on it were a “powerful message to the West.”

The company that produces these rockets claims - as she has said repeatedly - that she conducted very thorough simulations — more precisely, two simulations — of how this catastrophe happened. And they believe that the fired rocket came not from the territory of the rebels, but from the territory under the control of Ukrainian government forces. At the same time, the Russians declare to us: “You, the West, ignore the information and intelligence information we have, which say that Ukrainians are to blame.” And this is a very powerful message, the essence of which is: "You do not listen to what we have told you."

It is quite understandable that the data professionally presented by the Russian defense concern, a priori, cause, so to speak, a blow to justice and objectivity on the mezzanine loot the Dutch turned into the investigation and, most importantly, the forces behind the Dutch commission. If the facts presented by Russia are based on openly submitted scientific data, including experimental ones, the “expert cell” in the Netherlands for more than a year of “work” did not bother to make an elementary display of the aircraft fragments. Although what sort of calculation is in question, when the fragments were sawed at the crash site by the grinder and literally pushed into containers, deforming what was already subjected to multiple deformations due to the artillery strikes of the Ukrainian security forces.

By the way, by the present minute the same international expert group also presented its report. The first thing that attracts attention is the coincidence of the results (with Almaz-Antey) about the nature of the used ammunition. The Dutch also declare the use of the 9М38 rocket against the airliner, which has not been used in Russia for a long time. However, the Dutch experts decided not to go to the logical end and announced that "they do not know where exactly the missile was fired at Boeing."

Well, if the whole year is not enough, go to the end already - find in yourself, Mr. Justra, the courage to refer to the data of Russian experts who did not spare either the strength or the means to establish the truth about the crash of the MH-17 flight. Or will you continue to make ridiculous attempts to block the true culprits of the tragedy? ..

Ctrl Enter
Noticed oshЫbku Highlight text and press. Ctrl + Enter
We are
The Netherlands prosecutor's office published the next version of the report on the crash of a Boeing-777 in the DonbassOfficial briefing of the Ministry of Defense
Military Reviewin Yandex News
Military Reviewin Google News
219 comments
Information
Dear reader, to leave comments on the publication, you must sign in.