About the "separatist" and "pro-Russian" Assembly of NATO

October 14 2015
31
There was a conflict at the NATO Parliamentary Assembly: pro-Ukrainian delegates and one associate Angela Merkel did not get along. No, people did not fight, this is a civilized Europe, however, opponents did not fundamentally agree on a number of points of the adopted resolution. People’s deputy from the Petro Poroshenko Bloc, Ukrainian Mustafa Nyei, told Facebook that the German deputy Karl Lamers put forward 7 amendments to the text of the resolution on Ukraine. Five of them, Mr. Nayem considered separatist, two more - pro-Russian. 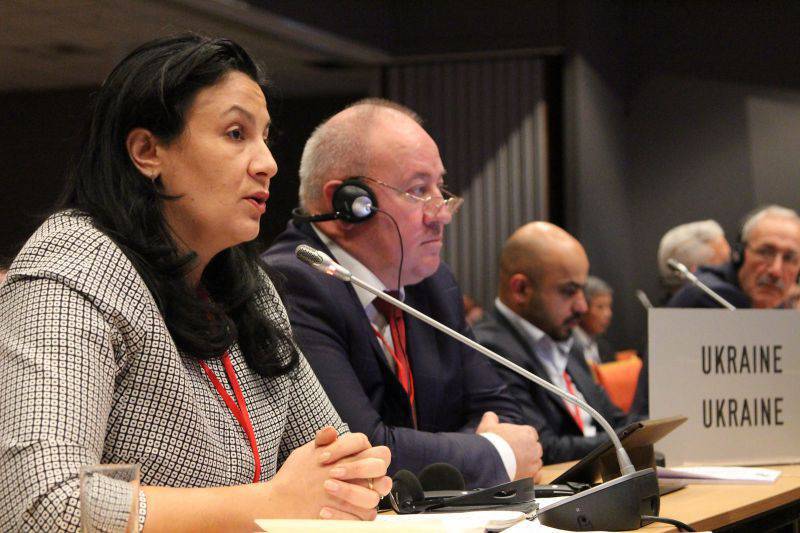 As 13 October reported agency RBCThe NATO Parliamentary Assembly has approved a “Resolution on Solidarity with Ukraine.”

The document expresses support for "the authorities and citizens of Ukraine in the struggle for independence and territorial integrity" and in the "quest for European and Euro-Atlantic integration."

The text also notes that "diplomatic efforts to resolve the conflict with Russia should not jeopardize the territorial integrity of Ukraine."

Finally, the document calls on the governments and parliaments of the NATO states to "redouble their efforts" to help Ukraine "at this critical moment." The drafters of the resolution insist on "maintaining political, diplomatic and economic pressure on Russia."

We wind the tape back a little.

Before the adoption of the resolution at the assembly a serious dispute broke out, full of “separatist” and “pro-Russian” passions.

A note on the progress of this hot dispute can be read on the page in "Facebook" respected people's choices and servants of the Ukrainian people Mustafa Nayem.

The deputy was “in light shock” when he realized “how different are the public positions” of some Ukrainian “partners” from their “backstage games”. Mustafa Nayem noted in his note that the Assembly "is facing a conflict with the German delegates on the Ukrainian issue."

This very conflict happened because of the adoption of the resolution “Solidarity with Ukraine” (its author is the French delegate Joëlle Garriaud-Maylam).

According to Mr. Nayem, the draft resolution itself is “quite acceptable”: the NATO Assembly is invited to “recognize the fact of Russian aggression and Moscow’s support for separatists in the east of Ukraine”, and also “call on the governments of the alliance to support Ukraine in the struggle for independence and territorial integrity by the continuation of sanctions against Russia and the provision of Ukraine with diplomatic, political, financial, economic and material and technical assistance. ”

However, as many as fourteen amendments to the text followed. And half of them were introduced by the German deputy Karl Lamers.

“I am not a fan of loud and pretentious words,” Nayem writes, “but with all due respect to a colleague from the Bundestag, we would call at least five of them in Ukraine separatist, and two more - frankly pro-Russian anti-Ukrainian.” (Punctuation saved. - Auth.)

Further, the deputy cites three of the seven amendments. Mr. Nayem’s particular indignation was caused by Lamers ’desire to remove the resolution’s paragraph, where alliance countries are advised to keep putting pressure on Russia until Moscow fulfills its obligations under the Minsk Agreement and“ does not stop the occupation of Ukrainian territories, including the Crimea ”.

The German deputy proposed limiting the following paragraph: "... to put pressure on both parties until the implementation of the Minsk agreements."

"The annexation of the Crimea", with indignation ascertains the Ukrainian people's deputy, "as it were, remains in brackets or is crossed out altogether."

The next amendment from Lamers is to remove item 5. But after all, his removal would remove from the text the term “pro-Russian separatists”. Instead, the German deputy proposes to urge all parties to comply with the Minsk agreements. Further we quote the people's deputy:

“What kind of all parties in the context of elections in these territories are we talking about if official Kiev has no access and has already made an unprecedented number of concessions on this issue?”

“Kiev ... has gone” - this is, apparently, a mixture of the female and male births in accordance with the tolerant European mood.

Where Kiev could have “gone” according to the amendments, the corrected paragraph 8c of the resolution shows. In the original, the clause calls upon “Russia and the separatist forces to remove all restrictions on access for the OSCE Special Monitoring Mission to all territories of eastern Ukraine, including along the Russian border.” In the editors Lamers words "Russia and the forces of separatists" are replaced by "all parties."

And here the people's deputy sighs with relief: after all

“Thanks to the efforts of Ivanna Klympush-Tsintsadze and Viktor Chumak, the Ukrainian delegation was able to remove this amendment from the resolution of the economic committee of the assembly)”.

However, the people's deputy experienced the greatest anxiety not from the amendments themselves. Indeed, he could not have imagined that such an advanced structure would adopt a “pro-Russian” and “separatist” document. The saddest thing for Kiev, which “went,” was the following.

Karl Lamers is “not just an ordinary member of the Bundestag, he is the deputy head of the Bundestag Defense Committee, the head of the German delegation of the NATO Parliamentary Assembly and, among other things, the associate of Angela Merkel in Germany’s Christian Democratic Union,” the people's deputy wrote on Facebook.

As a result, Mustafa Nayy concluded: the NATO Parliamentary Assembly "is facing a conflict between the pro-Ukrainian delegates and the colleague of Angela Merkel."

Fortunately for Ukraine, representatives of “at least seven countries participating in the session have already expressed their outrage at the German side’s amendments.” At the same time, representatives of the delegations of the United States, Great Britain, Spain, Lithuania, Poland, Turkey and Luxembourg, said the people's deputy, "before the beginning of the consideration of the resolution, verbally promised full support in repealing the amendments of Karl Lamers."

With the Anglo-Saxons and those who support them, we add on our own, everything is clear, and there is really nothing to comment on their decision. Turkey, for example, is saddened by the “arrivals” of Russian aircraft on the edge of its sky (this is, of course, a formal reason for criticism through the NATO structures of Russia helping Assad), and the rulers of Poland and Lithuania traditionally do not think “pro-Russian”. And even more so, no one would call people from Washington “separatists”.

After half an hour in the same "Facebook" Mustafa Nayem issued a new report.

“We did it,” he writes. - The resolution of the NATO Parliamentary Assembly “Solidarity with Ukraine” was adopted in full, taking into account all revisions and protests of the Ukrainian delegation. Not a single argument of colleagues from the Bundestag that the document should not mention the annexation of the Crimea or remove the words “Russian-backed separatist forces” from the text was not heard. The German delegation was crushed by speeches by representatives of the United States, France, Poland and, above all, Ukraine. ”

And a bit of irony from the "crushing" people's deputy:

“The only amendment of our German colleagues, which was adopted, was to change the spelling of the name and the name of the Ukrainian director Oleg Sentsov from the Russian“ Oleg Sentsov ”to the Ukrainian“ Oleh Sentsov ”. For which we sincerely thanked them. Because transliteration is extremely important. ” (Spelling and punctuation preserved. - Auth.)

So, Ukraine won another paper victory, with which we congratulate her. And let us remind the people's deputy a proverb: it was smooth on paper, but they forgot about the ravines, and walk on them.

In connection with the controversy that arose within the walls of the NATO Assembly, one question is interesting: what is happening in Berlin, if seven points of amendments come from colleague Angela Merkel?

"Free press" asked Rossiya Ishchenko, an observer of the MIA “Russia Today”: “Can we say that the position of Lamers is the position of the German ruling party and personally Angela Merkel?” The observer gave the following answer:

“Yes, you can. Such a high-ranking member of the Merkel party cannot afford amateur activities without risking their political future. At the same time, in the event of claims by the United States, Merkel can always refer to the fact that this is a deputy, not a cabinet member, and the deputies, they say, are free to determine their own position - democracy, you know. ”

But what is the reason for the pressure of Merkel on Poroshenko in terms of strict adherence to the Minsk agreements?

Such pressure has many reasons, the expert believes. The main one is “the absolute divergence of interests between the EU and Washington against the background of Berlin’s emerging confidence that Russia is strong enough to support the German rebellion, and that Moscow will not back down.”

As for the Crimea, his transition to Russia is "recognized by the EU de facto," Ischenko said. And it remains to "just make it legally." It is difficult, but Germany “is moving in this direction”, which “does not leave Poroshenko any hopes not only for the Crimea, but also for Ukraine”.

So it turns out, add from myself that Kiev wins only on paper. And behind the paper, European (more precisely, German) "ravines" begin.

Observed and commented on Oleg Chuvakin
- especially for topwar.ru
Ctrl Enter
Noticed a mistake Highlight text and press. Ctrl + Enter
We are
Results of the week. "Who will be the last to leave the composition of Ukraine is also debts!"Turkey: fighters for democracy came together
31 comment
Ad