A person always has the right ... of the Constitution of the RSFSR and the USSR in the XX century

October 17 2015
11
What does the average man in the street know about the Constitution? And not just their own country, but in general the concept of "Constitution"? Probably the first thing that many will say is the Basic Law of the state or a set of laws defining the rights and obligations of the state and its citizens. 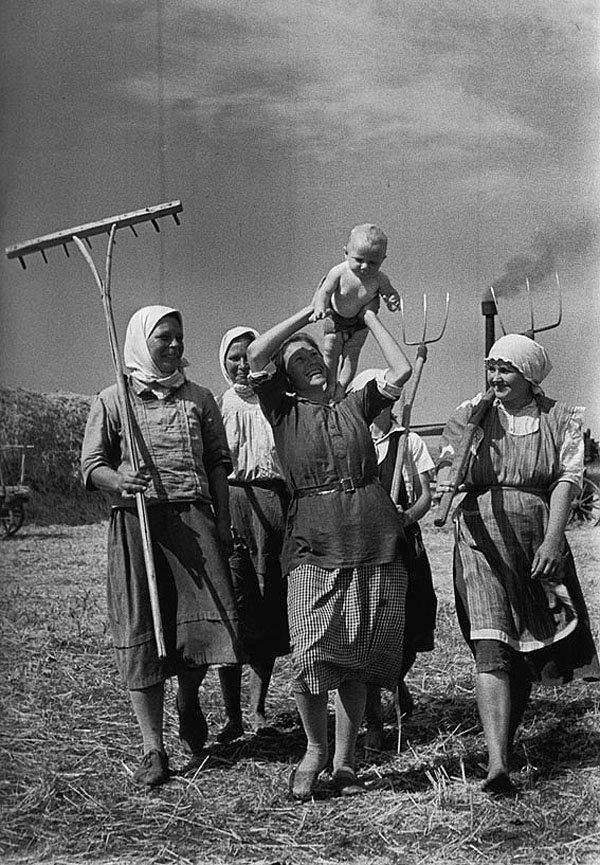 Photo of Markov-Greenberg
Many, no doubt, will complain with nostalgia that, they say, the Soviet Constitution guaranteed free education and medical care. That's just what it is, because there were several Soviet constitutions? However, this is quite natural, since the Basic Law always fixes the urgent transformations or new gains of power.

Thus, the first Constitution of the RSFSR, adopted in the 1918 year, as well as the all-Union, which appeared five years later, were literally imbued with revolutionary rhetoric. “Political and economic counterrevolutions”, “espionage”, and “banditry” were all but mentioned there, but this is not surprising: the young Soviet republic was threatened with a hostile imperialist world from all sides. In addition, the main subject of the new Soviet law was not a citizen or a person, but a “worker”. The main task was determined by the establishment of the dictatorship of the urban and rural proletariat and the poorest peasantry, as well as the suppression of the bourgeoisie and the "destruction of the exploitation of man by man." As a result, a socialist society was to appear without division into classes. Moreover, it was emphasized that access to the union of the republics is open to all - both the already existing socialist republics and those that were only going to form in the future. 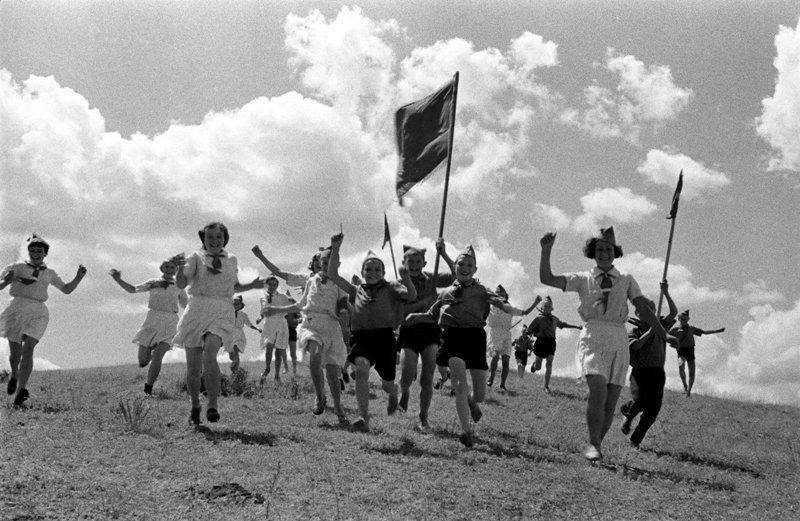 Photo of Markov-Greenberg
In honor of the Leninist Basic Law, on the site of the monument to the hero of the Russian-Turkish war 1877 – 1878 of Mikhail Skobelev, was placed the obelisk of the Constitution. A year later, this 26-meter brick stela was supplemented with the Soviet version of the Statue of Liberty, which was molded from the niece of Konstantin Stanislavsky Vera Alekseeva. Looking ahead, we note that the fate of this dubious for its artistic qualities of the monument was sad. In 1941, it was made from very poor-quality material and was blown up under the pretext of "inconsistency with the architectural appearance of the square" and transfer to another place. Later a monument to Yury Dolgoruky appeared on Sovetskaya. And the “obelisk of the Constitution” was, of course, not searched for “another place” ...

The Stalin Constitution, adopted in 1936, was a reflection of a new stage in the development of the country - the building of socialism. She didn’t even have a preamble: it was assumed that what was said needed no preface. Along with the right and duty to work, citizens have the right to rest. Freedom of speech, press, assembly and rallies were also guaranteed exclusively “in order to strengthen the socialist system”. This Constitution looked more democratic, since the USSR sought to attract to its side the sympathies of as many countries as possible — to oppose the spreading fascism. 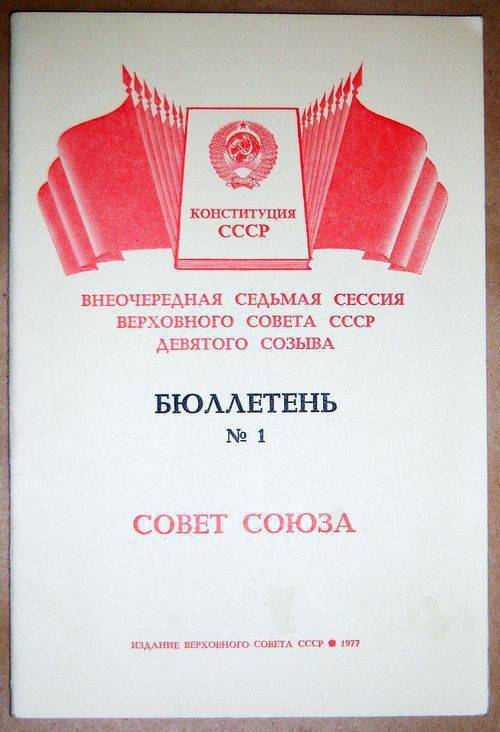 Bulletin of the session of the Supreme Council, at which the Constitution of the USSR was adopted. Xnumx
The Stalin Constitution proclaimed a planned economy the basis of the socialist economy system. And the property could be either state (that is, national property, to which the land with its subsoil, forests, water, enterprises, transport and communications, as well as banks) were included, or cooperative-collective farm.

For the first time, all Soviet citizens were granted equal universal and direct suffrage by secret ballot, as well as the right to material security in old age and illness, the right to free education, in particular, in their native language.

By the 1960 years in the USSR, the foundations of an industrial society had already been formed, and the 1959 Congress of the CPSU announced the final victory of socialism. There is a need for a new Constitution - a “document of international importance”, and in 1962 a Constitutional Commission was established, headed by Nikita Khrushchev. Probably due to the huge number of units, it could not work effectively enough. Five years later, Leonid Brezhnev declared that a socialist society was built. A new draft of the Constitution was required. 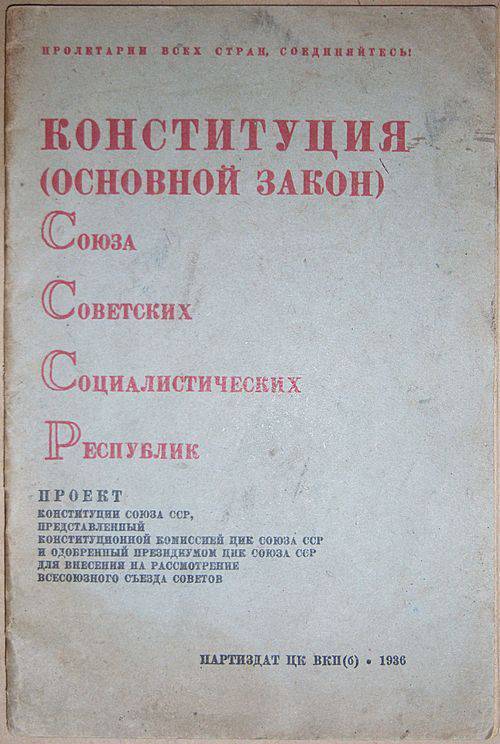 USSR Constitution 1936 of the year
According to many, the Brezhnev Constitution has become the most elaborate Basic Law of all adopted earlier. No wonder, because its creators were tasked with writing a document that would not require constant amendments and additions.

So, besides the “leading and guiding role of the Party,” the document contained many important and new points. With regard to, for example, education: The Constitution of 1977 of the year provided for only the possibility of learning in their native language. This was done because many parents preferred to send their children to Russian-speaking, rather than national schools. The right to scientific and artistic creativity, as well as state protection of copyright was guaranteed.

The social foundation of Soviet society was declared “the inviolable union of workers, peasants and intellectuals”. At the same time, the state should strive for social homogeneity of the society.

The propaganda of war was forbidden in the country. And in foreign policy, the strengthening of the positions of world socialism, support for the struggle of peoples for national liberation, the prevention of wars, general and complete disarmament and the principle of peaceful coexistence of states with different social structures were declared.

Provision was made for the presentation of the most important issues for a referendum.

Actually, this draft Basic Law itself was brought up for national discussion, in which 140 million people took part, that is, more than half of the entire population of the country and 3 / 4 adult citizens of the Soviet Union. As a result, they received 400 thousand proposals for amendments! 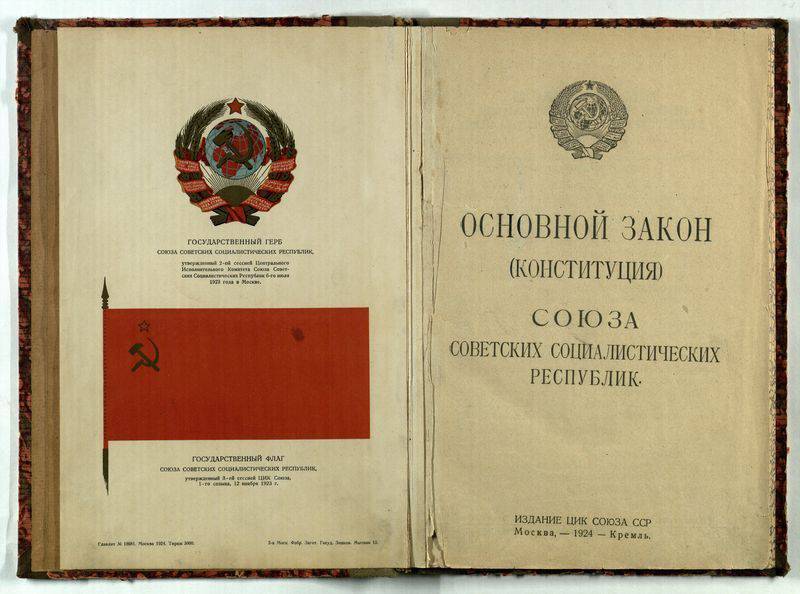 USSR Constitution 1924 of the year
A curious detail: the adoption of the Brezhnev Constitution for three years deprived citizens ... of their legal day off. This happened because the Basic Law adopted October 7 - this date became a new red day. The Stalinist Constitution Day (December 5) was annulled, 7 didn’t have time to celebrate October 1977, of course ... Moreover, this day fell on Friday. And in the next two years, respectively, Constitution Day fell on Saturday and Sunday, and the tradition of transferring holidays if they coincided with weekends did not exist then.
... The question of the termination of the Constitution of 1977 of the year arose after the signing in 1991 of the so-called Bialowieza Agreement - a document establishing the Commonwealth of Independent States. The presidents of the Russian Federation and Ukraine Boris Yeltsin and Leonid Kravchuk, as well as the chairman of the Supreme Council of Belarus Stanislav Shushkevich put their autographs under it. The agreement declared that the USSR had ceased to exist. A little later, President of the Soviet Union Mikhail Gorbachev resigned as head of state. And two years later, in 1993, a new Basic Law appeared in Russia ... But this is another story.