October 13 2015
42
Within the family of armored vehicles "Typhoon" are created several projects of protected cars. To date, two samples of such machines have come to trial operation in the army. These are the armored cars Typhoon-K and Typhoon-U, developed by the KamAZ and Ural automobile plants, respectively. Several dozen armored vehicles of two types are now being tested in the units of the Southern Military District. Not so long ago, one of the armored cars of the Kama Automobile Plant had to become an exhibit at the “Innovation Day of the Southern Military District” exhibition.


The development of the KamAZ-63968 armored car “Typhoon-K” was launched at the beginning of the current decade and was carried out as part of the program for the development of promising protected vehicles for the armed forces. The first samples of the Typhoon family of cars were built in 2011 year. In the future, this technique was shown to the public. The premiere of an armored vehicle from KamAZ took place at the Victory Parade in 2014. In the future, these machines were repeatedly demonstrated during other events, including the “Innovation Day of the Southern Military District”.

In addition to the main contractors, a few dozen other companies and organizations of the defense industry were involved in the Typhoon program. Their task was to develop and manufacture various components and assemblies, armor, etc. Thus, all the machines of the new family, including Typhoon-K, are an excellent example of cooperation in the framework of promising projects. 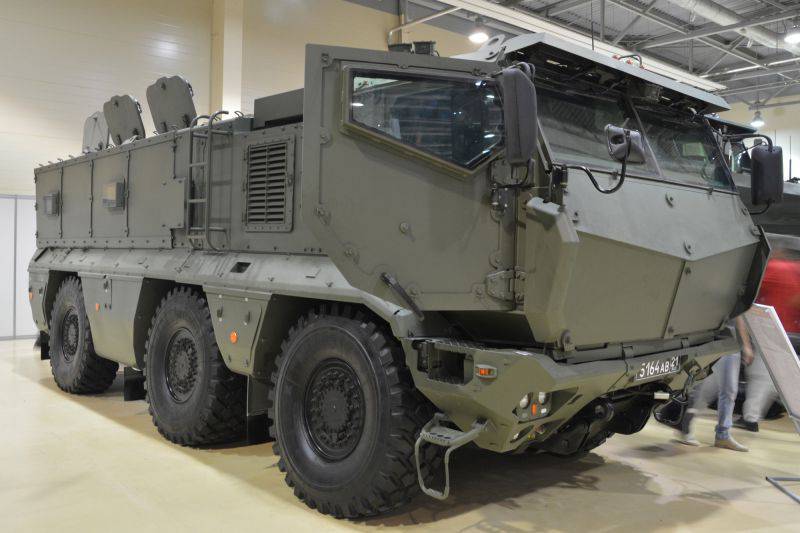 Protection of the crew, assault force and machine units is provided with the help of a combined armor consisting of metal and ceramic elements. Such blocks protect armored cars as from small weapons, and from undermining mines under the wheel or bottom. Declared protection against small arms of various types of caliber to 14,5 mm. Mine protection - up to 8 kg of TNT.

Due to the solid booking, the KAMAZ-63968 armored car has a full weight at the level of 24730 kg. At the same time, the vehicle transports up to 2,6 tons of cargo, and is also capable of towing a trailer weighing up to 8 tons. The main task of the prospective armored car is to transport personnel. However, it is possible to transport some goods. In addition, a special transport vehicle for the carriage of goods can be created within the Typhoon family.

The required mobility characteristics are provided by a KAMAZ-730.345-450 diesel engine with an HP 450 power. With the engine associated transmission, providing all-wheel drive. Engine torque is transmitted to all six driving wheels. As part of the transmission, some imported units are used. The existing powerplant allows the armored car to accelerate to the highway to 100 km / h. Power reserve - up to 1000 km.

The armored car "Typhoon-K" has a separated cabin and a module of the troop compartment. The crew and assault forces are separated from each other, but can communicate using existing devices. The cabin provides three seats for the driver and other crew members. To monitor the situation, they have a large windshield and two side windows in the doors. In addition, the crew and the landing can use a set of video cameras installed on the perimeter of the machine. This equipment, the signal of which is displayed on the screens, significantly improves the view.

In the troop compartment are 14 "mine" seats, reducing the impact of the shock wave on passengers. Also, the security of the assault is provided by special five-point belts. In the sides of the troop compartment there are several small windows with bulletproof glass. For landing and disembarking in the stern sheet there is a lowered ramp with hydraulic drives. If necessary, the fighters can leave the car through the door in the ramp. In the roof of the module module troop compartment are six hatches.

To date, the armored cars of the Typhoon family, including the KAMAZ-63968 vehicles, have passed the main tests and were transferred to the troops for trial operation. In December last year, it was reported that units of the Southern Military District received 30 armored vehicles of a new type. In addition, at the very beginning of 2015, another two dozen armored vehicles were delivered. According to the results of operation in the troops, it will be decided to adopt this equipment.

One of the vehicles undergoing trial operation was sent to the exhibition “Innovation Day of the Southern Military District”, where everyone could see it. It should be noted that in March of this year, during the action of the Ministry of Defense “Military service under the contract is your choice!”, Rostovites could already see “Typhoon-K”, but then the car was parked on a fenced site. In early October, the doors and hatches of the armored car were open to all comers. We took advantage of this "proposal" and present a photo review of the car. 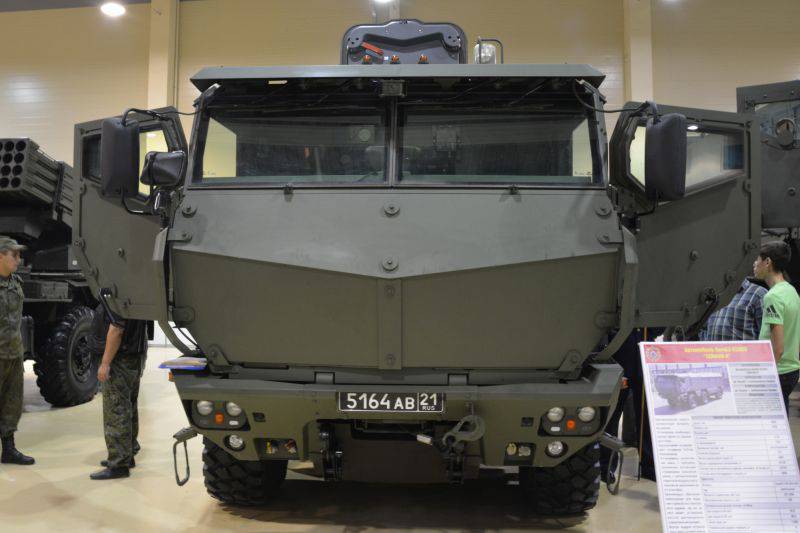 Despite the armor, the car retained the characteristic "KAMAZ" exterior 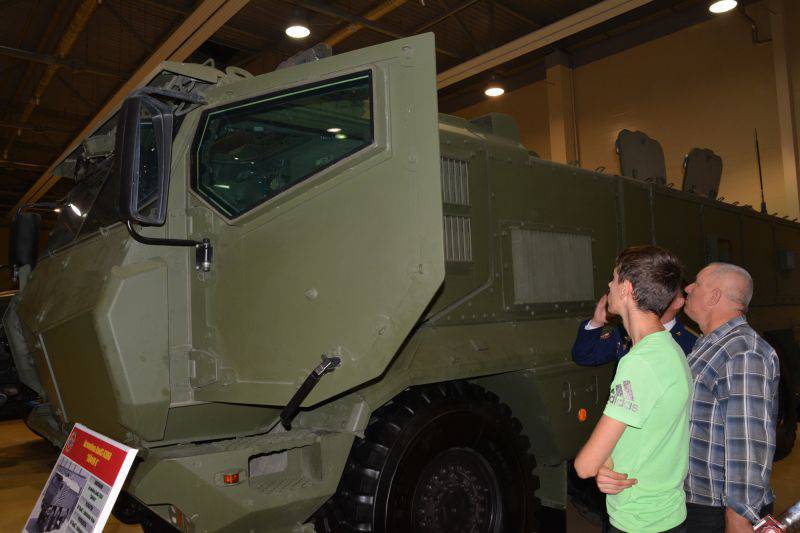 Used suspension allows you to change the clearance of the machine. With minimal fit in the car is no problem 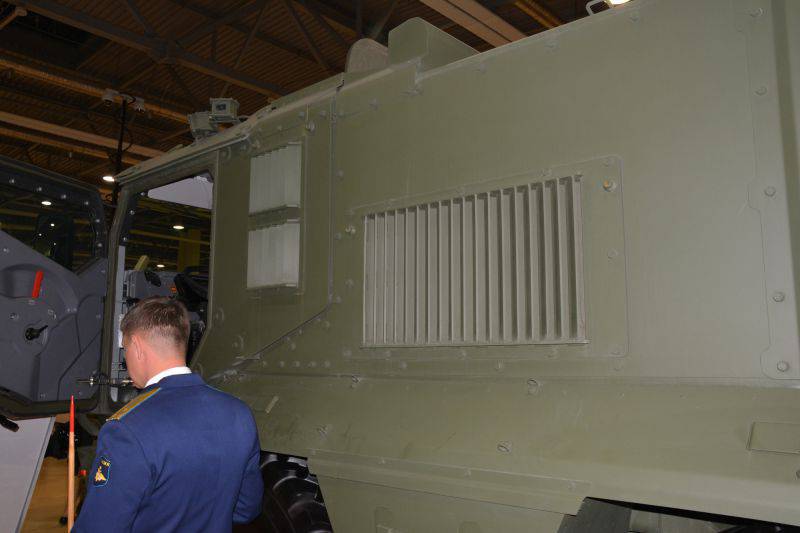 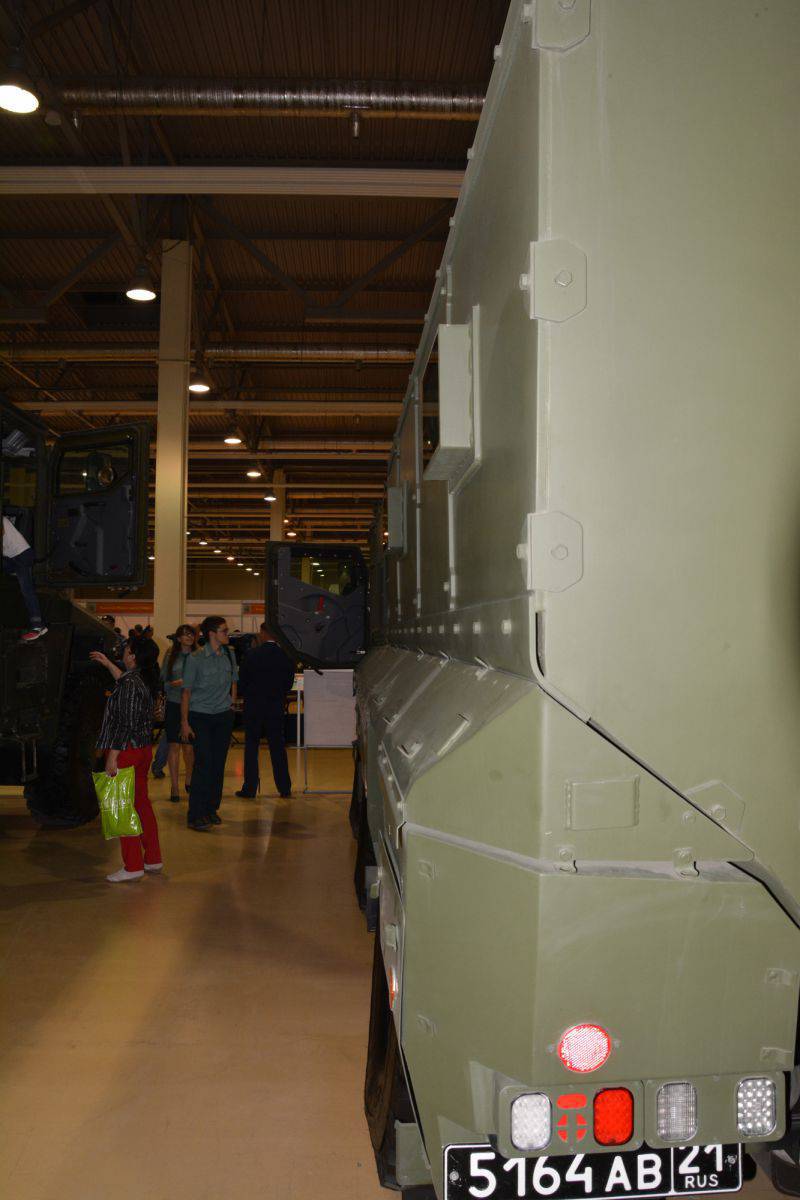 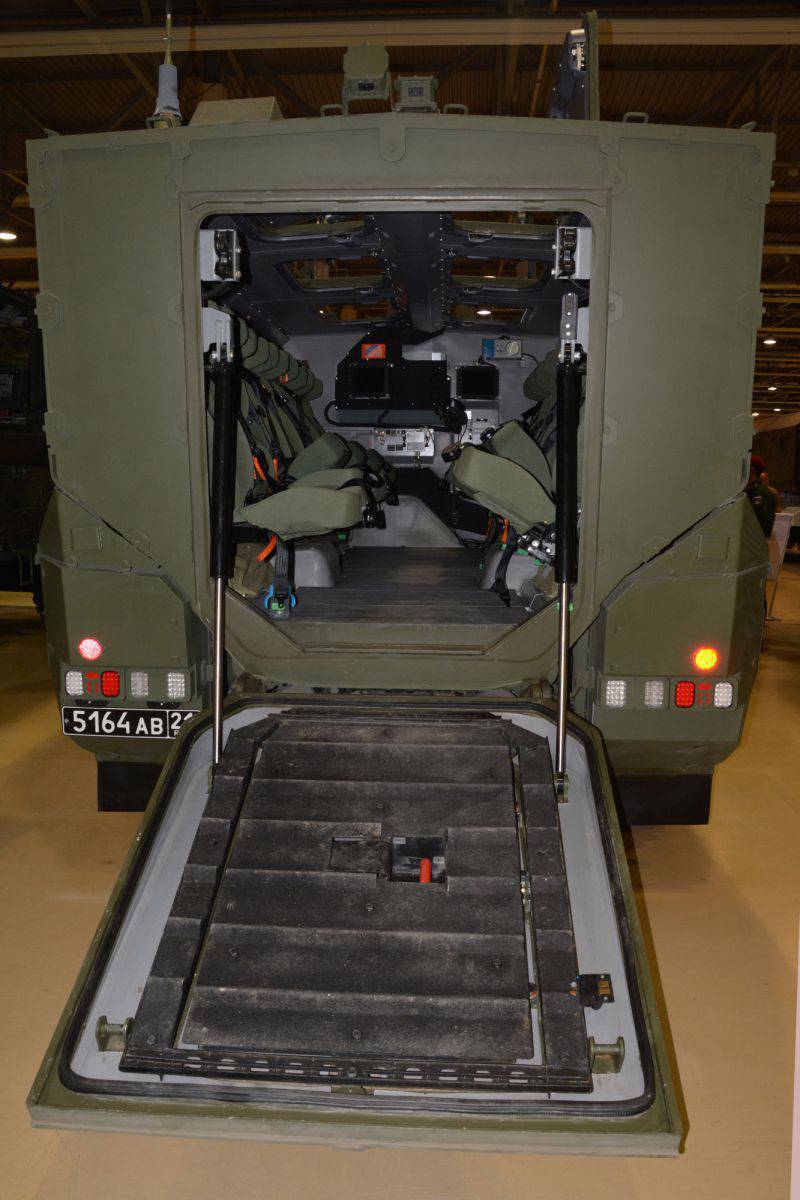 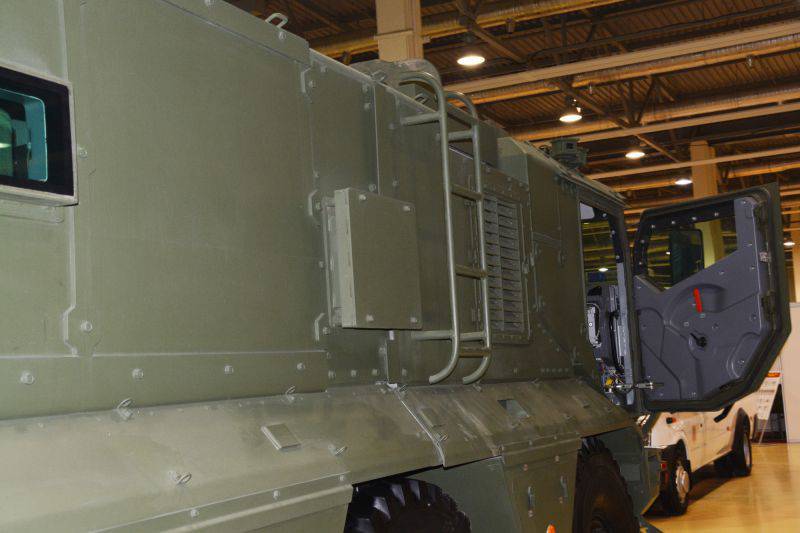 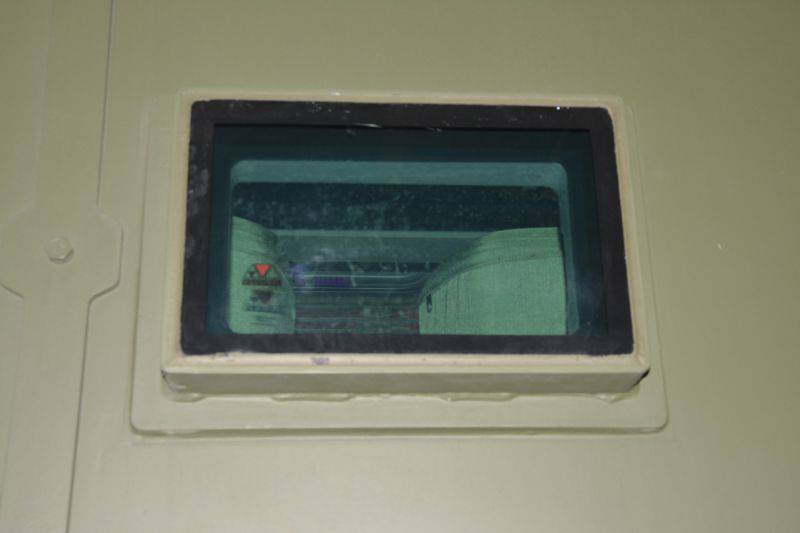 One of the windows of the troop compartment 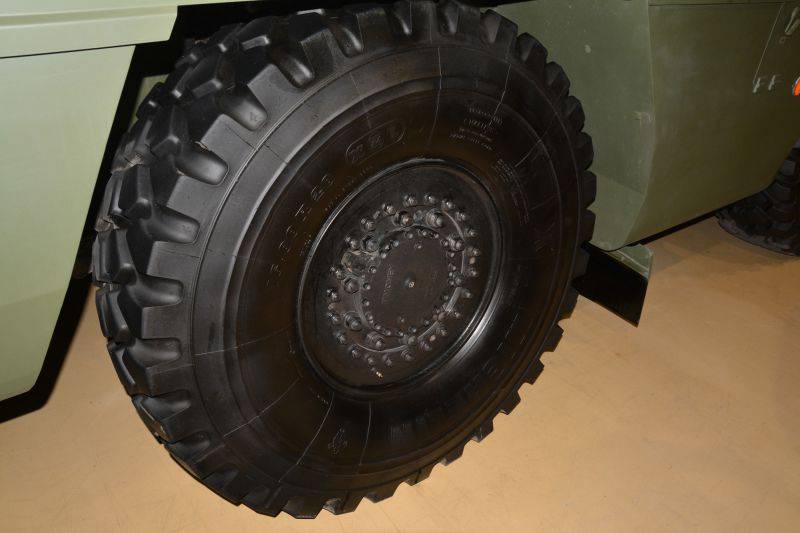 The design of the chassis are actively used imported components. For example, the logo of the Irish company Timoney is visible on the wheel hub. 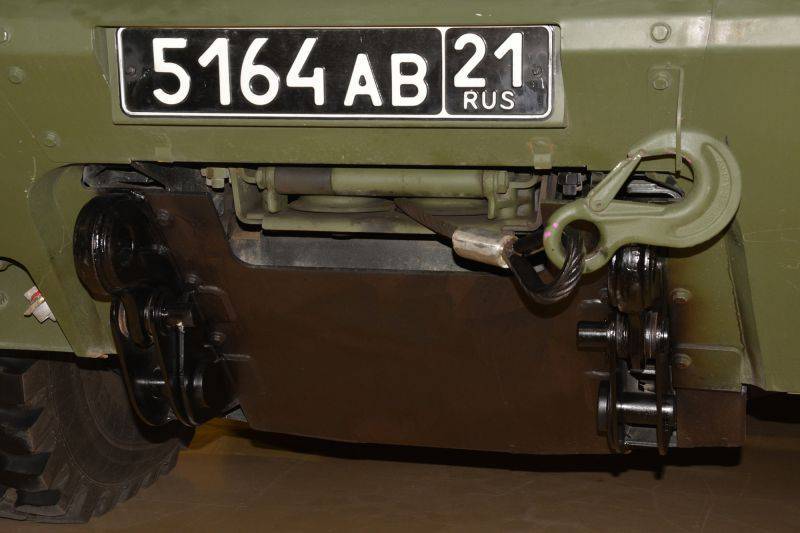 If the wheels do not cope with their work, they will help winch 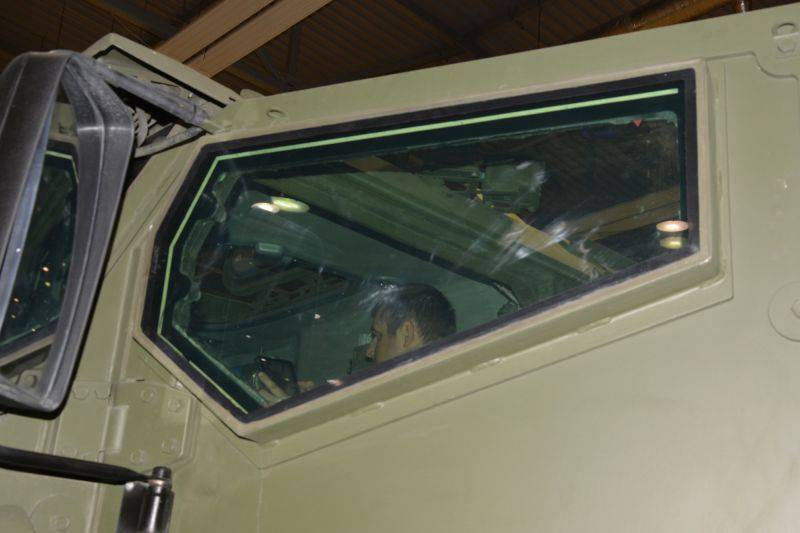 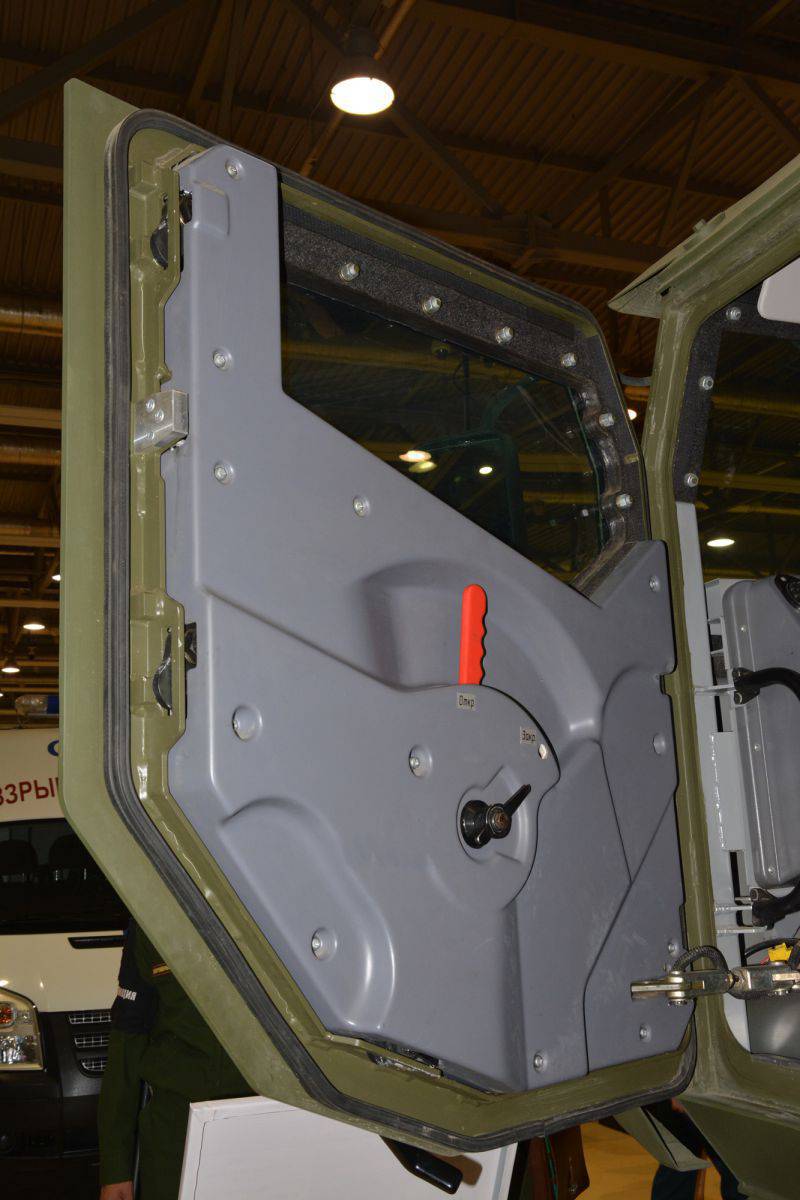 Inside door mechanisms are closed by a casing. 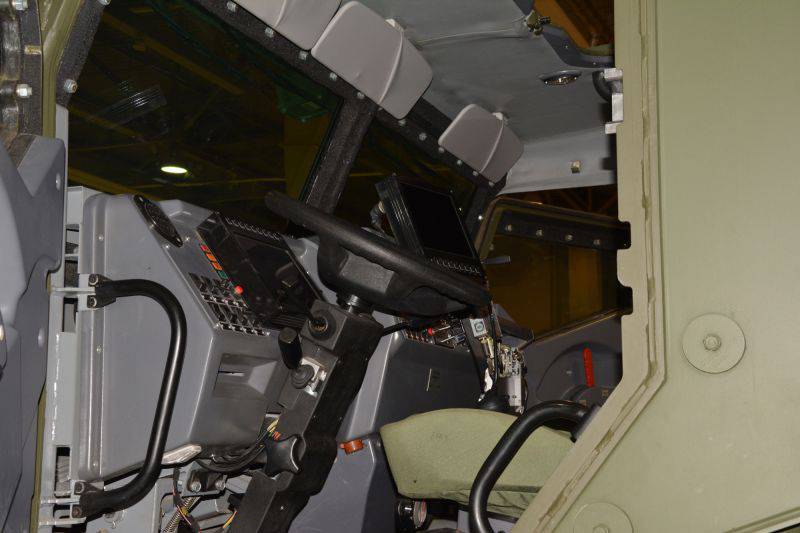 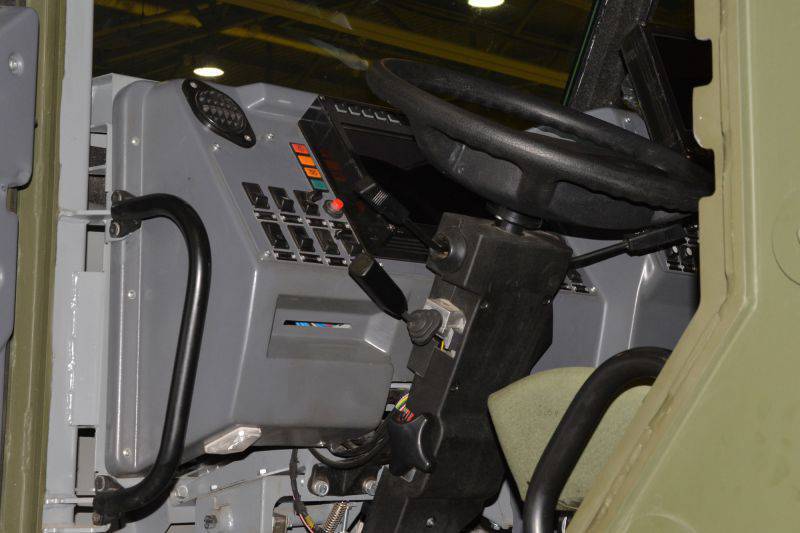 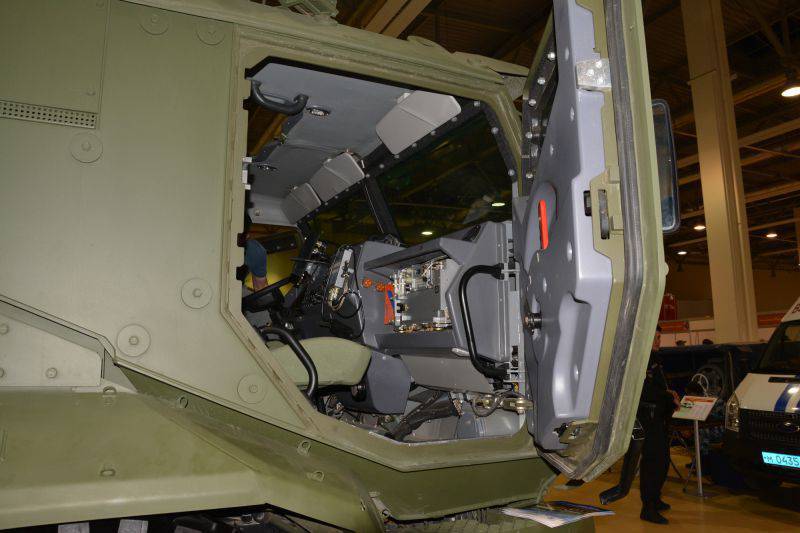 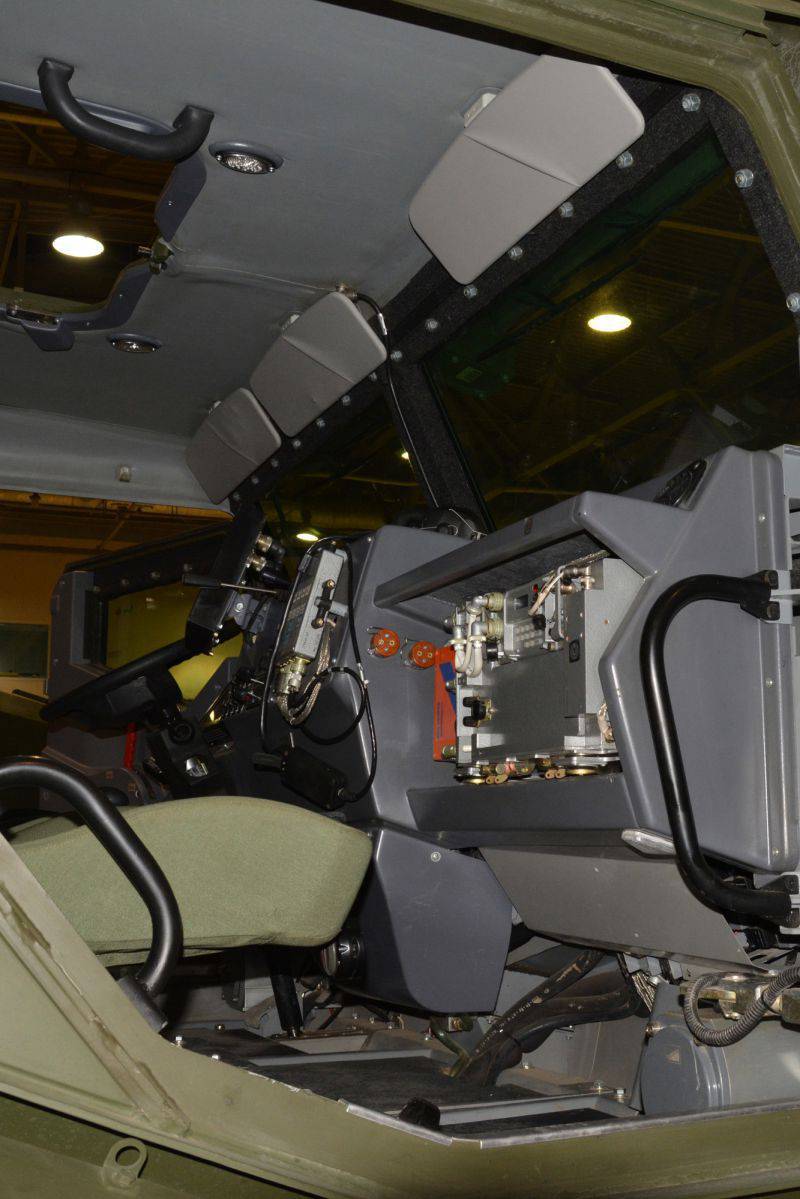 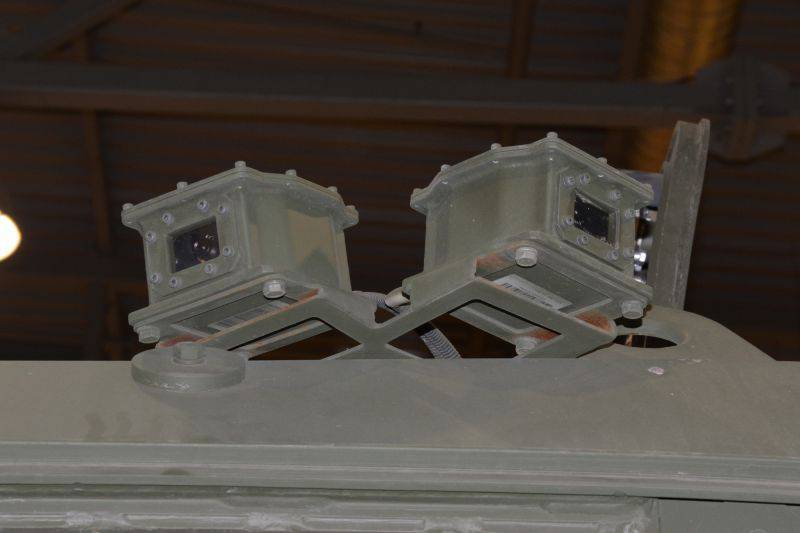 Video cameras over the driver's door 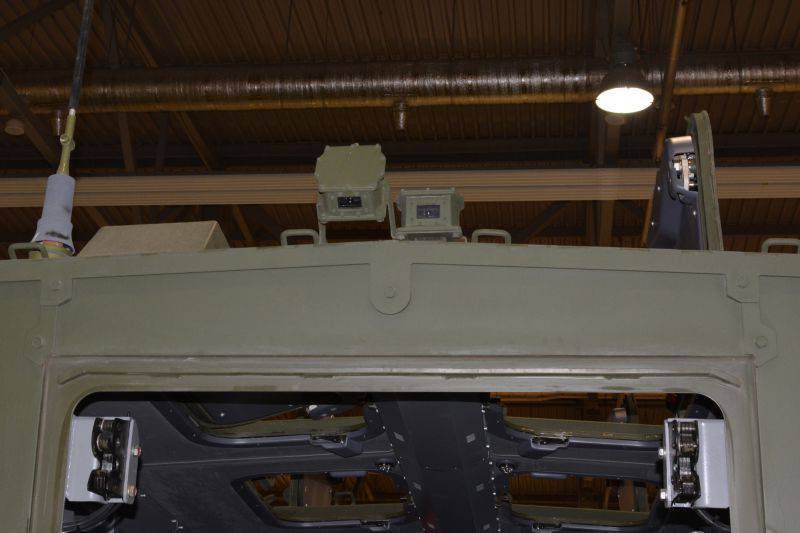 Video cameras over the stern ramp 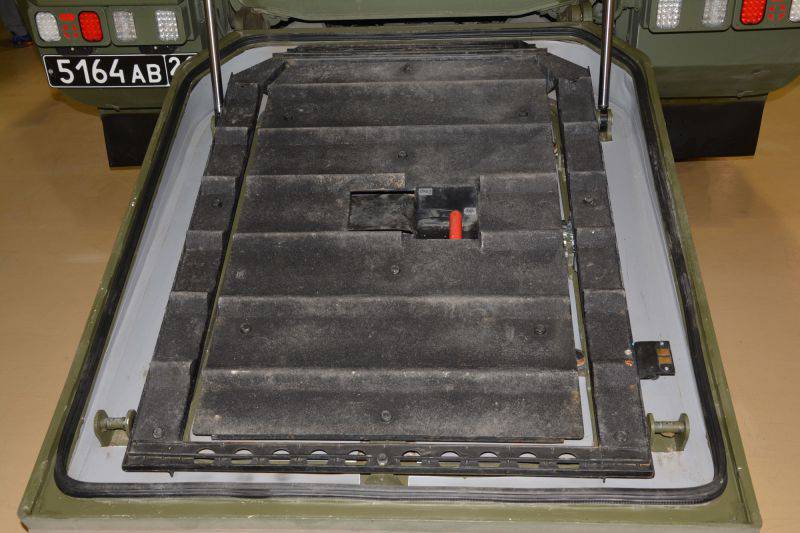 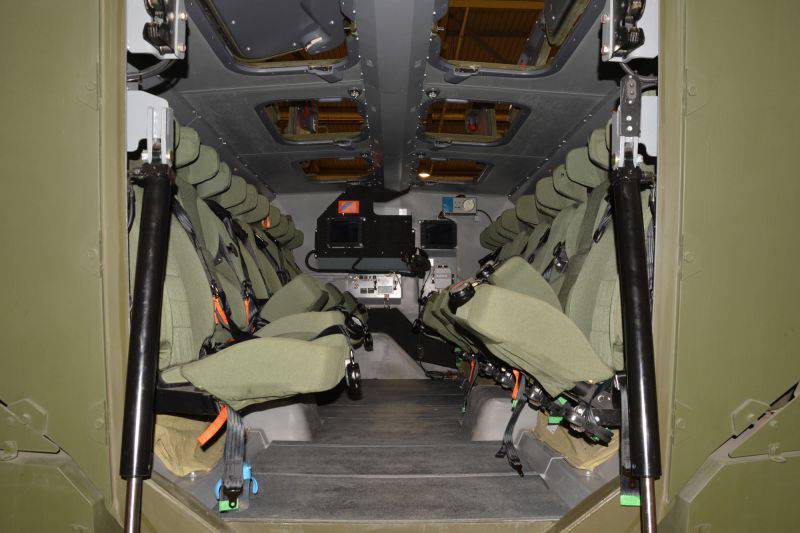 View from the ramp on the troop compartment. Well visible ramp cylinders 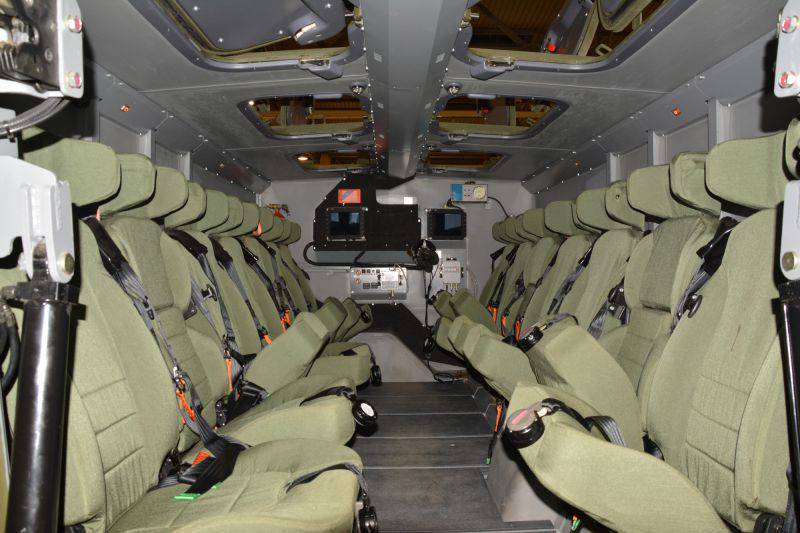 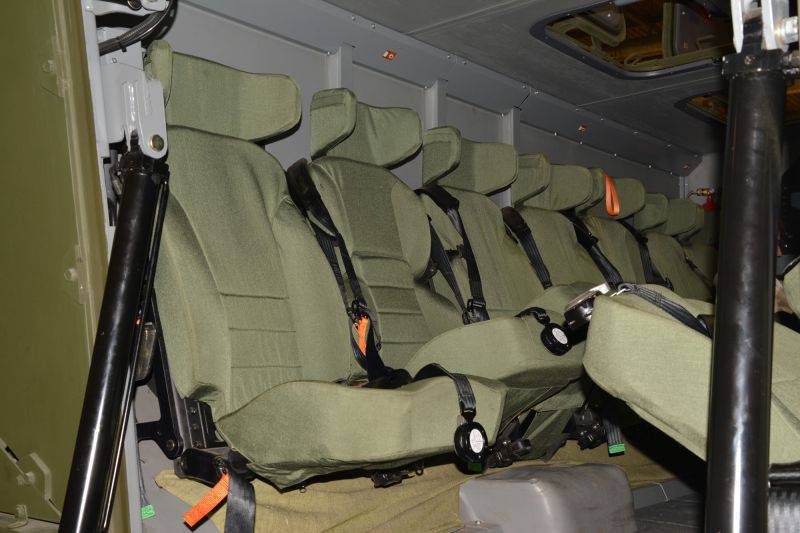 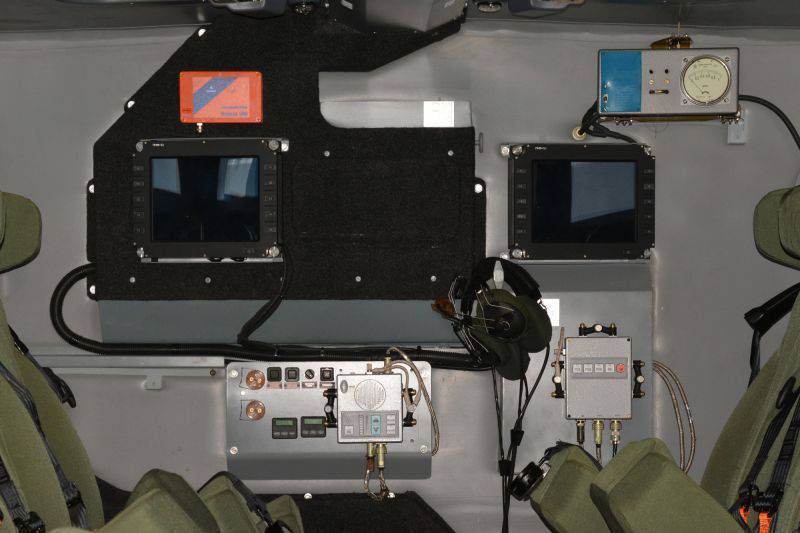 Equipment on the front wall 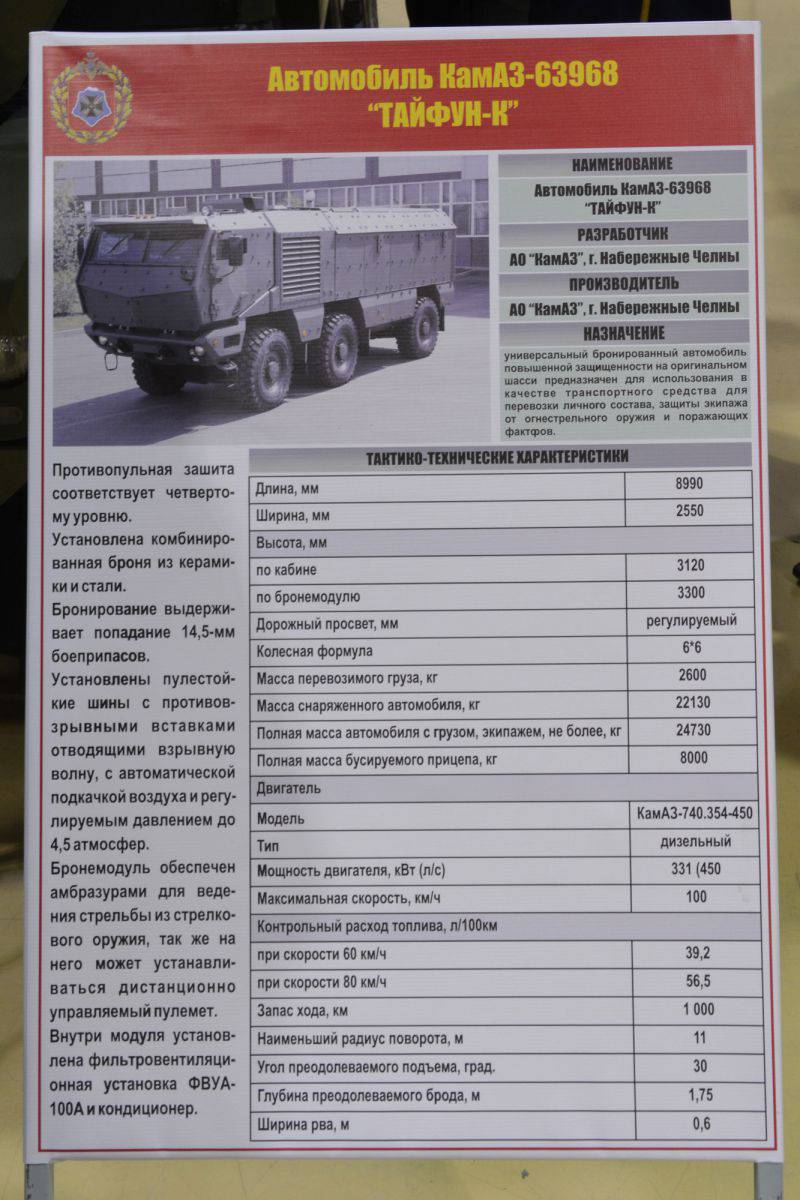 Information plate from the exhibition 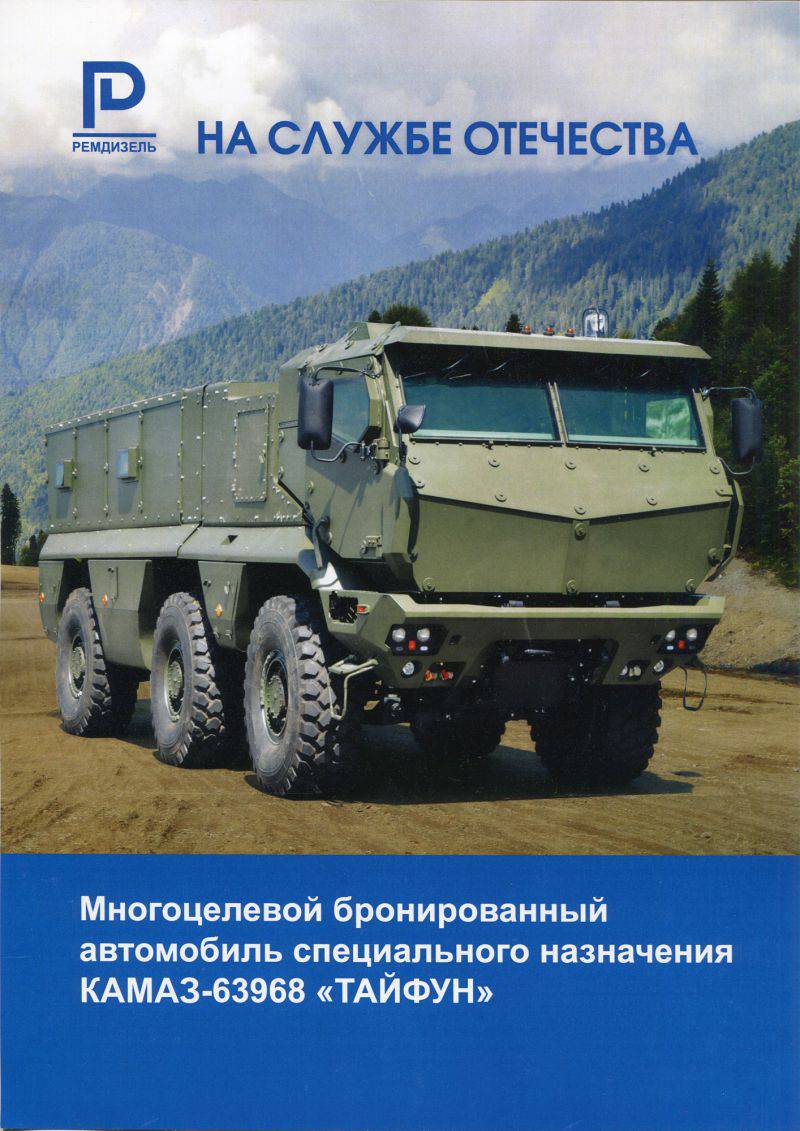 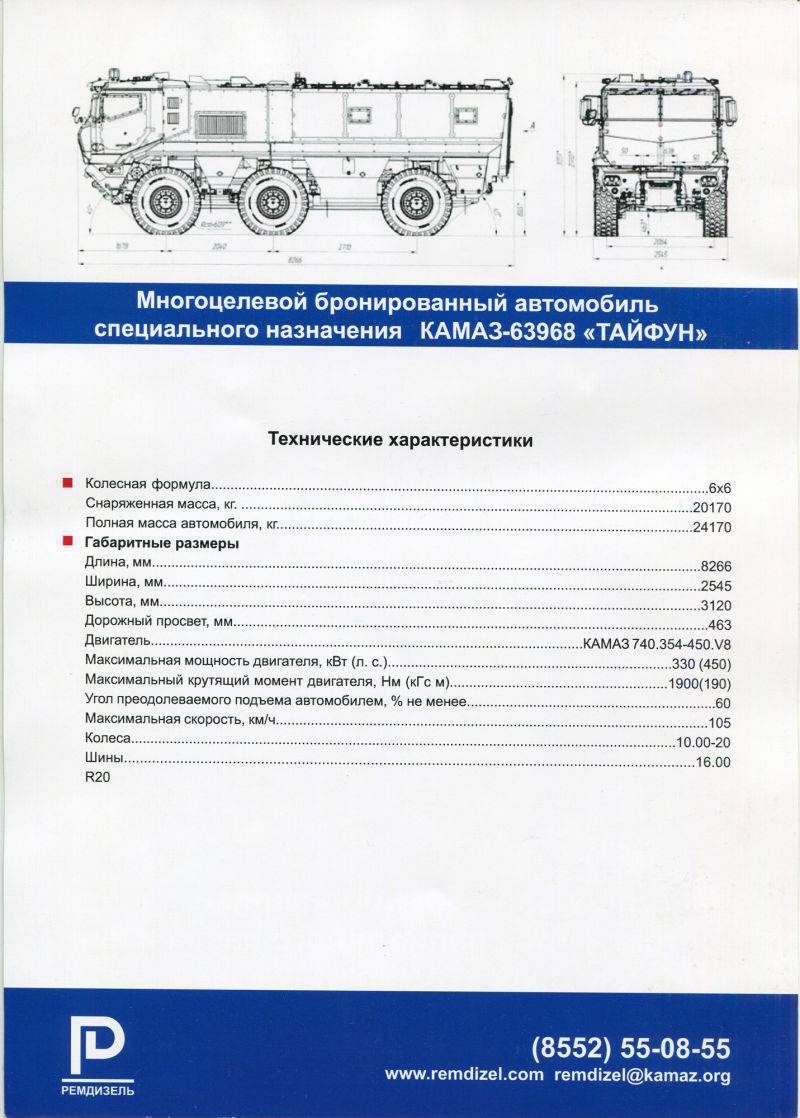 Ctrl Enter
Noticed oshЫbku Highlight text and press. Ctrl + Enter
We are
Innovation Day of the Southern Military District: Pictures from the ExhibitionThe action “Military service under the contract is your choice!” In Rostov-on-Don: future contract servicemen, exhibitions and “Russian Knights”
Military Reviewin Yandex News
Military Reviewin Google News
42 comments
Information
Dear reader, to leave comments on the publication, you must to register.