Belarus is not jumping

October 13 2015
109
The Central Election Commission of Belarus has summed up the preliminary results of the presidential elections after processing 98 with more than one percent of the ballots. Despite the fact that the head of the CEC of the Republic of Belarus, Lydia Yermoshina, insists that the result should be regarded as preliminary, the result of the elections is clear. The victory is once again celebrated by Alexander Lukashenko with a large margin, with which we congratulate him. The CEC, meanwhile, is counting results from foreign polling stations, including Russian ones.


Of the more than 6,1 million voters who came to the polls, about the current President of the Republic of Belarus gave their votes to about 5,1 million Belarusian citizens. This is almost 83,5%. If the item “against all” could be considered a real candidate, then he would take the second place in the voting with 6,4% of votes. Ticked in the box "against all" put, as many as, 390,4 thousand voters. This is about the same as how many (in total) live in the city of Mogilyov - the third (after Minsk and Gomel) in the population of the city of Belarus.

The three candidates who participated in the elections besides the current president did not get at all and 10% of votes. 4,42% of voters (about 270 thousand people) voted for Tatiana Korotkevich, 3,32% (202,3 thousand) for Sergey Gaidukevich, 1,67% (slightly more than 100 thousand) for Nikolai Ulakhovich. These results are demonstrated at turnout in 87,2%. 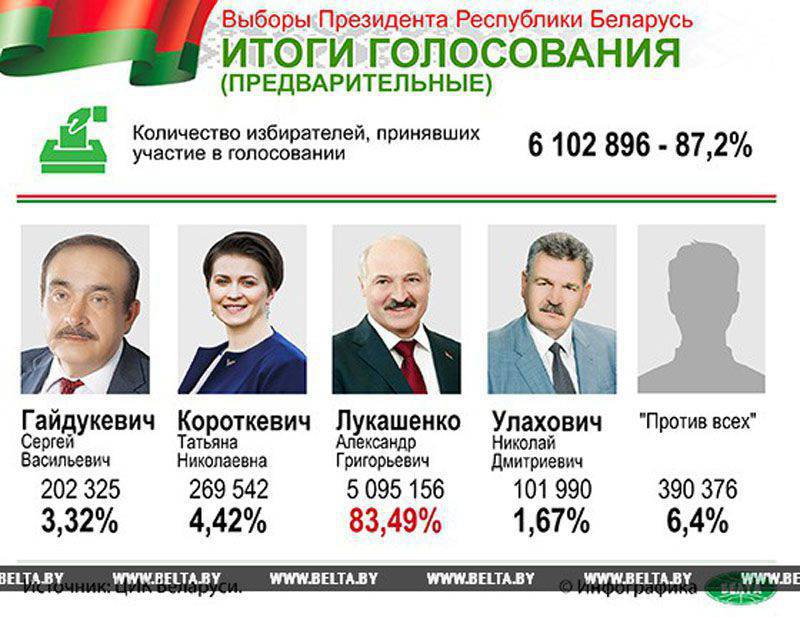 The statement of the head of the Central Election Commission of Belarus, Lydia Yermoshina (published on the BelTA channel on YouTube):

Ms. Korotkevich announced that she did not trust the results of the CEC, noting that she would expect data from observers. According to the loser candidate, she “knows for sure” that 15% of voters voted for her in Mogilev, and even more 20% in Grodno. Korotkevich said she did not intend to congratulate Lukashenko on winning the election. The lady, apparently, does not know how to play with dignity, and is trying to challenge obvious things.

Korotkevich on the air Euroradio:

We are waiting for the results of observations. They were not equal for all candidates. The conditions in the media were not equal. Conditions were not equal in the field. The whole country was not as liberal as Minsk. These were transparent non-democratic elections. We did not work to legitimize the regime, but worked on the need for change, but with power they are impossible. We should now put a comma as soon as possible, parse the flights, write a complaint. And we will take the next step.

Ms. Korotkevich’s next step, in her own words, is pickets and fundraising for campaigning.

Despite the violent reaction (which was predicted) on behalf of opposition candidates (especially the same Ms. Korotkevich), the elections were declared to be held.

International observers did not record any flagrant violations that could affect the final result. It should be added here that the interest of the observation corps in the presidential elections in the Republic of Belarus was enormous - about 40 thousands of registered observers from dozens of countries around the world.

Congratulations on the victory in the election of Alexander Lukashenko sent President Vladimir Putin. Message from the Kremlin press service:
The head of the Russian state congratulated his colleague with a convincing victory in the election of the President of the Republic of Belarus. It was noted that the voting results demonstrated A. Lukashenko’s wide support by the Belarusian society.
The President of Russia stressed the readiness to continue the intensive dialogue and joint work on building up the entire complex of bilateral relations and interaction within the framework of integration structures in the Eurasian space.

President of Kazakhstan Nursultan Nazarbayev, President of Armenia Serzh Sargsyan, head of Kyrgyzstan Almazbek Atambayev, Chairman of the PRC Xi Jinping, leaders of other countries of the world sent their congratulations to Alexander Lukashenko.

Brussels sent a peculiar variant of congratulations to Alexander Lukashenko. The European Union announced a "temporary" (for the time being 4 months), the lifting of sanctions against Belarus. Statement by French Secretary of State for International Affairs Arlem Desira (quote RIA News):

We made a decision in the light of the release of several political prisoners and after the elections, which took place in a reconciled atmosphere, although we are waiting for the report of the observers to have a more complete solution. The decision taken is to simultaneously have the opportunity to extend the sanctions against Belarus, but to suspend their action in order to promote respect for human rights, democracy, and the principles of the rule of law state. Therefore, for the next four months, it was decided to suspend the sanctions, but they can be activated immediately if this is justified.

Returning to the congratulations voiced in a telephone conversation with Alexander Lukashenko Vladimir Putin, it is necessary to note the addition of the press service, which says that the leaders of the two countries discussed the situation in Syria and other problems. One of these problems raised in the conversation by the presidents of the Russian Federation and the Republic of Belarus is Ukrainian issues. The fact is that on Sunday evening, when the election results were not known, Lukashenko rather unexpectedly turned to the official Kiev, accusing him of “throwing militants with weapons in hand".

At the same time, Alexander Lukashenko added that all those who had traumatic weapons with him were simply turned back by Belarusian border guards, and those armed with war guns were detained right on the border.

Considering the fact that Lukashenko made such a statement at the time that the election commission members started counting the votes given by citizens during the elections, it can be assumed that the president (who is also a presidential candidate at the time) was pretty nervous. The fact is that Alexander Lukashenko himself is well aware of the exact moment at which the most zealous oppositionists can be consolidated on an external team to carry out large-scale protest actions, often resembling outright provocations. According to all the laws of color revolutions (at least in the post-Soviet space), mass actions can begin on election day - usually after their completion and simultaneously with the announcement of the first preliminary results by the CEC chairperson. So it was in “orange” Kiev, it was in Tbilisi when Saakashvili came to power, as it happened in Bishkek several times. Maidan 2014 somewhat out of this list.

Nervousness of Alexander Lukashenko before the announcement of the results can be understood. After all, if on the territory of Belarus before the elections, people with weapons were actively thrown, it means that someone needs it ... Moreover, almost immediately after the polling stations in Minsk (on October Square) were closed, representatives of opposition forces began to gather, and, remarkably, the opposition leaders themselves were not noticed in their circles. Apparently, the lessons of past years are well learned ...

Gathering in the amount of about a couple of hundred people, the Belarusian (if only Belarusian?) Disagree with the flags of the European Union (well, not Belarus ...) and the posters "Lukashenko, go away" moved to the Independence Square. 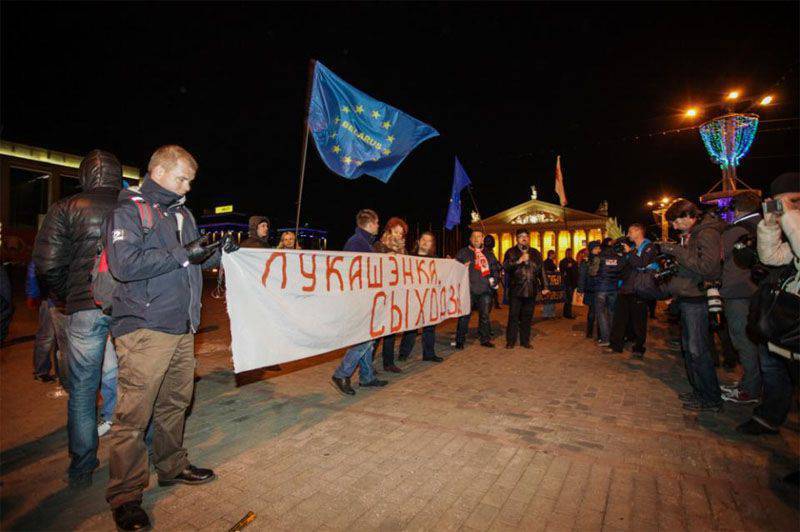 Neither of which increased the mass was not the question. There are not enough appetizing cookies for certain individuals, and therefore the Belarusian version of the Maidan did not happen ... No "hto not jumping", no "on the knife." True, at least one yellow-blakitny still showed itself in the center of Minsk, although in comparison with its Maidan comrades-in-arms more than modestly: 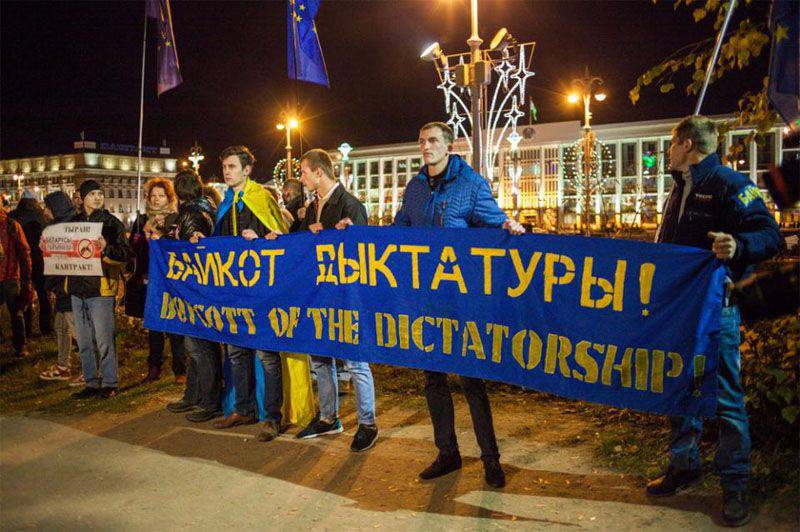 Armed persons, who had made their way from Ukraine, were caught in time, by internal maydanuts (there are plenty of them everywhere, and in Russia, too) they explained popularly that shouting something about the freedom of Belarus under the flags of foreign states was moveton. As a result, the elections went smoothly, and the first post-election period also passed quietly, even if someone (especially outside Belarus) was very anxious for Batka to flare up.

And at this moment, somewhere near Rostov or Moscow, a person named Viktor Fedorovich must have been saddened, who had not mastered the philosophy that, if not in time to stop the channel of receipt of imported cookies that cause the desire to jump and beat with hoofs, then you can profukat country.