Reality show instead of politics

October 13 2015
27
The retired American Army Colonel Lawrence Wilkerson made a prophecy concerning the United States of America. According to the former military, the "empire" of the United States is heading for decline. There is nothing unusual about it, just история warns: for America, everything "ends". But for other countries, the time of "awakening" comes. 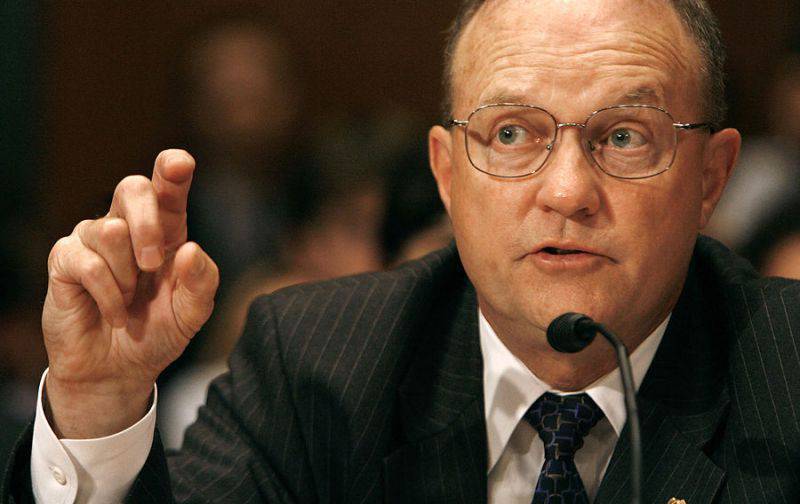 The retired army colonel Lawrence Wilkerson (Lawrence Wilkerson), who once worked as head of the US Secretary of State Colin Powell, broke out in a prophetic speech about the "demise of the United States Empire." This site reports zerohedge.com.

Wilkerson recalled some of the lessons of history: he spoke about the decline of empires in the past and how it came to decline. In his opinion, the United States is repeating the “classical trajectory” leading to collapse.

A retired colonel argues that the United States should move to a different international strategy: to become "one of many" states on the planet and focus on cooperation. In the same form in which the USA currently exists, it is impossible to continue to exist. “History tells us that we probably came to an end,” the colonel notes.

As for the rest of the world, then, according to Wilkerson, when the United States "ends", other parts of the planet will be "awakened." The United States has shown itself to be an "unskillful strategist." And now the States have no “power”.

Wilkerson called the reasons for the decline of the global "hegemon": the endless incursion of the US into overseas "projects" while the concentration of wealth and power in the hands of the few in the country, corruption and the disproportionate role of finance.

According to the expert, the chances of the imminent collapse of the "empire" of the United States are much higher than is generally recognized. In addition to corruption and the desire for power, the decline will be accompanied by climate change and a lack of resources. No wonder even the Pentagon is now dealing with climate change. According to the forecasts of scientists, in the near future on the planet will remain arable land to support the entire 400 million people.

Colonel figuratively describes the strategy of the American "empire". Empires, he said, are fading from their own actions. Let's say their territory is attacked by “barbarians”. 3.000 citizens are dying, and "mainly because of their negligence" power. In response, the “empire” organizes the campaign and kills 300.000 people and spends 3 trillion. dollars "to fight the threat." Then the empire pokes its nose into all the world's cracks, "in order to exacerbate this threat by its actions."

"Sounds familiar? - asks Colonel. “And this is exactly what empires do at the stage of their dying.”

The first indicator of the impending death of the empire, according to Wilkerson, is its inability to "control even herself."

Earlier, Mr. Wilkerson repented of his participation in fomenting the war in Iraq.

In 2013, the ex-head of the office of Secretary of State Colin Powell said that the Bush administration artificially created a reason for the invasion of Iraq, the TV channel reminds "RT".

Mr. Wilkerson recalls how Powell, who spoke at the UN on the need for war in Iraq, said on the sidelines: “I wonder what happens when our contingent in 500 thousands comb the entire territory of Iraq from end to end and doesn’t find anything there?”

Wilkerson believes the Bush administration has deliberately created a reason for invading Iraq.

“I also do not disclaim responsibility, and this sin will always lie on my conscience,” said a former State Department official.

Meanwhile, in Europe, too, they began talking, if not about the collapse of the United States, then about the end of their world domination. Where exactly in Europe? In its very economic heart - in Germany.

10 October Spiegele Matthias Schepp's comment was made (a replica from Moscow). Shepp heads the Spiegel bureau in Moscow and has worked for many years as a foreign correspondent.

The war in Ukraine and Russia's intervention in Syria became a turning point, signifying the end of the era of Western domination. Pax Americana is no more, America no longer keeps order in the world and does not guarantee it. But only a few months ago, the press had a “mantra”: Russia, they say, “is in international isolation.” Europeans simply hid behind this mantra.

World politics has not had Europe as its center for a long time, and now the United States has lost its last influence. Under Obama, an international journalist believes, the White House abandoned its position as a global “regulator” of power.

October 11 Russian Journal "Expert" posted on its pages a review of the article "The Wall Street Journal", on the issue of US government debt.

It turns out that central banks around the world are selling US Treasury bonds. Leaders in sales of US government bonds - China, Russia, Norway, Brazil and Taiwan. They are also the five largest buyers of US Treasury bonds.

Thorsten Slok, chief economist at Deutsche Bank for international affairs, says that capital flight from the US government bond market is at a record pace. According to him, the net outflow of funds in twelve months amounted to 123 billion dollars - a record volume from 1978 of the year.

Analysts say bond sales by China, Russia, Brazil and Taiwan are a sign of a crisis in emerging economies. And this crisis could spill over into the American economy.

What do the American authorities think about the coming “collapse” or even “crisis”? And also about the fact that America is no longer able to follow the "world order"?

American President B.H. Obama the other day acknowledged that Syria is "a difficult problem for the entire world community." And the United States “failed” to do something. “What we couldn’t do, so far, and I’m the first to admit it, is to change the dynamics inside Syria,” Mr. Obama quotes. Gazeta.ru.

Earlier, the White House, the newspaper reminds, actually acknowledged the collapse of the US strategy for arming Syrian opposition groups, on which 500 million dollars was spent. Many of the “oppositionists” trained by American instructors went over to the side of radical groups and handed them weapon.

At the same time, Obama did not agree that Putin challenged the American leadership, since “to lower his economy to the bottom and send his troops in order to support his only ally,” according to Obama, does not mean to show leadership.

In addition, Barack Obama is busy distributing advice to those who are preparing to become president. No, it's not about Hillary Klington.

As transmits "BBC", the American president at the charity event of the Democratic Party in San Francisco gave some tips to rapper Kanye West. It turns out that this rapper was going to run for president in 2020 year.

According to B.H. Obama, Kanye West has good chances to be in the presidential chair. And then gave the rapper a couple of tips.

Here is the advice that we considered to be the main one: West, as president, will deal with very strange personalities who behave as if they were being filmed in a reality show.

When the Roman Empire was dying, we add from ourselves, there were also “very strange personalities” there.

Observed and commented on Oleg Chuvakin
- especially for topwar.ru
Ctrl Enter
Noticed a mistake Highlight text and press. Ctrl + Enter
We are
How to help Donald Trump to become president of the United States?The tragedy of the American army ("The Atlantic", USA)
27 comments
Information
Dear reader, to leave comments on the publication, you must to register.