NATO forces will be everywhere

October 13 2015
46
On October 8, NATO announced the creation of new headquarters in Hungary and Slovakia. Headquarters are needed to deploy alliance forces in the region. The next day, an increase in the number of reconnaissance flights became known. aviation NATO is on the Russian borders. On October 11, the British newspaper “Daily Star Sunday” (from the category of dubious publications) quoted a certain “source” from the UK Ministry of Defense saying that NATO pilots were ordered to attack Russian planes in Iraq in the event of a threat. The Russian Embassy has already requested clarification from London regarding this strange information. 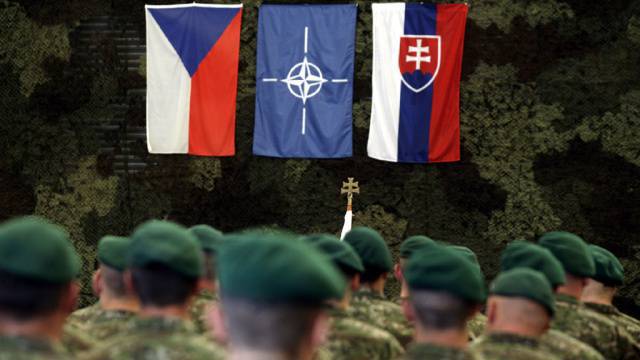 On October 8, NATO Secretary General Jens Stoltenberg made a statement at a press conference following the meeting of the NATO Council at the level of Ministers of Defense. "In addition to the six already existing headquarters in Eastern Europe, today it was decided to create new command and control structures in Hungary and Slovakia," he quotes TASS.

In addition, NATO approved the "doctrine of expanding its response forces to 40 thousand people," added Stoltenberg. According to the Secretary General, the organization is ready to deploy the Response Force at the southern borders of the alliance: “In the coming months we will consider our new needs along our southern borders. At the same time, the NATO military will continue to train in order to improve their level of training and to be able to operate effectively together. ”

As for the new headquarters, then, as noted RBC With reference to the Associated Press, Hungary and Slovakia were the last NATO members on the western border of the former USSR, in which the regional alliance headquarters were not established. According to Mr. Stoltenberg, centers in Eastern European countries (including in Poland, Bulgaria, Romania, Estonia, Latvia, Lithuania) should facilitate the deployment of alliance forces in the region and coordinate joint exercises.

The next day, October 9, "Russian newspaper" quoted a message from Russia's permanent representative to NATO, Alexander Grushko. He said that the number of reconnaissance flights of NATO aircraft near the Russian borders has increased.

The Permanent Representative also reminded of the NATO naval presence at the southern borders of Russia: “On October 7, an American destroyer with antimissile capabilities entered the Black Sea, but also, as some sources said, equipped with Tangar cruise missiles.

"RAF Tornados armed and dangerous: Tensions between Russia and the UK escalate. If you’ve been on a rainy day, you can’t get to know the hostel of the Russian planes, ”the British tabloid wrote. "Daily Star Sunday". This means that the Tornado fighters of the Royal Air Force are “armed and dangerous” and that the “tension” in relations between Russia and Great Britain is growing. "Tornado", the newspaper said, will be armed with air-to-air missiles, and their pilots will get the "green light" to shoot down in case of a threat from "Russian aircraft". "Exclusive" material gave the newspaper John Ward (John Ward).

Some "sources", high ranks from the Ministry of Defense of the UK, declare that it is only a matter of time when the western soldiers will converge in a deadly fight with the Russian soldiers. One source told the newspaper: “We must protect our pilots, but at the same time we will be one step closer to war.” According to him, just one downed plane is enough, and the whole situation will change immediately.

Tornado airplanes will receive special air-to-air missiles that can explode any aircraft in the sky. Each such rocket costs £ 10,000 and may be three times the speed of sound. It is fixed on its target using an infrared thermal guidance system. A rocket explodes on contact with a target or at a certain distance from it. Each plane can carry four missiles.

The heads of the Defense Ministry believe that the possibility of an attack by a British aircraft to Russia exists.

The publication on the permit for the "British and NATO pilots" looks rather strange, we add from ourselves, even if the "sources" really reported something of a sort to the press. Moreover, it looks strange, considering that the Russians do not conduct military operations in Iraq. Perhaps, the British and NATO military, and then the newspapers are worried about the "unpredictability" of the Russians, which the Western press is now writing about? Or the West is expecting from Moscow a probable decision on Iraq - if Damascus invited Putin, then why not do the same to Baghdad?

There is another reason for saying "sources".

October 10 representatives of the Ministry of Defense of Russia and the Pentagon held a videoconference at which they discussed the safety of flights over Syria. In the near future will be repeated negotiations. The previous video conference between the Russian and US military took place on October 1, reminds "Lenta.ru". The Pentagon said that the talks were devoted to the actions of the crews of the Air and Space Forces of the Russian Federation in Syria in order to avoid creating conflict situations during combat missions.

In any case, publications on the topic of NATO and Russia are alarming. There are too many of them, and this topic rises in the media every day.

October 11 became aware of the reaction of Russia to the publication in the British newspaper.

“We are disturbed by media reports, as we are talking about references to senior cabinet members. Urgently requested clarification from the British Foreign Office. At the same time, the hypothesis of a potential conflict between British and Russian aircraft in the skies over Iraq is incomprehensible. As you know, Russian aviation does not participate in strikes against IG facilities on the territory of this state, ”the ambassador said.

And now let us return directly to NATO, to the realization of the idea of ​​creating alliance headquarters in Hungary and Slovakia and the deployment of NATO forces in the region.

The NATO Secretary General gave a completely exhaustive explanation of the expansion of the Alliance’s activities and clearly identified the enemy.

"The crisis in Ukraine and the operation of the Russian Federation in Syria, the spread of terrorism and the largest migration crisis require long-term solutions and further adaptation of NATO," the newspaper quotes him. "Sight".

In addition, the alliance is alarmed by the buildup of Russia's military presence in Syria: “What is happening in Syria is important for NATO. Because we see that Russia is experiencing some of its most modern weapon».

On the same day, Turkish President R. T. Erdogan also spoke. In his opinion, the main goal of Moscow in Syria is to strengthen its military presence in the country: “Russia in Syria does not strike at the Islamic State grouping. How many times they said: "For us, all opponents of the regime are terrorists." It seems their main goal is to build a base in Latakia and increase their military presence in Syria. ”

“They sent 50 airplanes there, conducting serious military maneuvers. We cannot accept this state of affairs. In addition, Russia's explanations regarding violations of our airspace are not convincing, ”Erdogan said. The Turkish president recalled his meeting with his Russian counterpart on September 23 in Moscow: “I am in Moscow in the presence of Vladimir Putin made a long speech. What happened after that, we all know. I spoke with Putin on the phone and after the start of the Russian air operation. After that, an incident occurred in violation of our airspace. Under these conditions, calling again does not see the point. ”

However, the acting director of the NATO Information Bureau in Russia, Robert Pszhel, explained to the newspaper Vzglyad that the threat from the south is primarily understood to be ... militants of the IG. “NATO is preparing the Rapid Reaction Force,” he said. - Within the framework of these forces will be the forces of "super-fast" response. According to the Secretary General, they are provided not only to (God forbid) use them in the east, but, if necessary, in the south. The Secretary General also recalled that NATO is ready to help Turkey as its ally, in accordance with the Washington Treaty, but, on the other hand, everyone understands that Turkey has the second largest army in NATO, it also has its own great resources. ”

As the coalition led by the United States are fighting the IG fighters, we add from ourselves that the whole world has already been heard. As for the reluctance of some NATO representatives to openly declare Russia their enemy, this is not news. In the end, the EuroPRO system was also conceived as a barrier against the "Iranian threat."

Observed and commented on Oleg Chuvakin
- especially for topwar.ru
Ctrl Enter
Noticed a mistake Highlight text and press. Ctrl + Enter
We are
Daily Star: Vladimir Putin boasts Russia's military strength, revealing plans for a promising warshipSituational analysis of the death of the MH17 flight (Malaysian Boeing 777), made on the basis of engineering analysis from 15.08.2014
46 comments
Information
Dear reader, to leave comments on the publication, you must to register.