October 12 2015
33
Convair B-36 was originally conceived as a real super bomber. This is an American intercontinental bomber, which forever took its place in stories. Firstly, this bomber became the world's first intercontinental carrier of nuclear weapons. It was with the Convair B-36 bomber that the notion of a global nuclear war entered our lives, and gradually the understanding that there could be no winner in such a war began to penetrate the minds of world politicians. Perhaps that is why this bomber got its unofficial nickname “Peacemaker” (“Peacemaker”). Secondly, this machine has become one of the largest ever built among all combat aircraft: the largest wingspan and height. At the time of its creation, this aircraft was only inferior in size to the famous Hercules flying boat created by Howard Hughes.


The B-36 became the first bomber in the world to fly intercontinental range. This interesting aircraft was designed and produced by Convair in response to the technical requirements of the US Air Corps command, which were prepared on April 11, 1941. The military demanded to create a combat aircraft that would have a maximum bomb load of 32 659 kg. This aircraft should have started from aviation bases located in the United States, deliver 4536 kg of bomb load to targets in Europe.

The main requirement of the military was the range without refueling, which should have been at least 16 093 km, in addition, it was necessary to ensure the flight speed within 386-483 km / h and a practical ceiling of at least 10 670 meters. Of the four proposed aircraft projects, the US military opted for the Model 36, which was distinguished by an airtight fuselage and a wing root with a thickness of 1,83 meter, which provided access during the flight to the power plant, which consisted of 6 piston engines with pushing screws. Initially, the project provided for a two-tail tail, but by the time the XB-36 prototype was fully assembled and ready for rollout from the Fort Worth workshop (September 8 1945), the bomber had one tail fin. 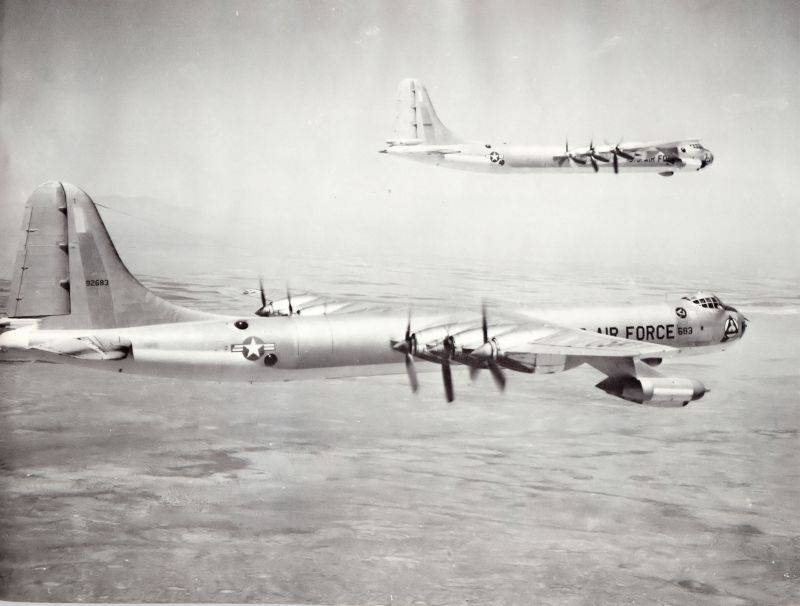 The XB-36 bomber prototype climbed into the sky 8 August 1946 of the year, the car differed with one-wheeled carts of the main landing gear. The second aircraft, designated YB-36, also intended for testing, initially had one-wheeled carts, but later they were replaced by four-wheeled ones, which became standard and on serial bomber. The upgraded version of the aircraft received the designation YB-36A, it differed from the XB-36 exterior shape of the cockpit canopy, which stood for the contours of the aircraft fuselage, the engines on which the modified turbochargers were installed, and the fact that the design of the fuselage and the wing were installed connectors, and also was installed radar.

Even 23 July 1943, the company Convair received a government order for 100 bombers, but only through 4 of the year, 28 August 1947 of the year, the first of the 22 production aircraft B-36A in the unarmed version of the training aircraft, intended for training crews, was able to make his first flight. Serial production of the B-36 bomber, nicknamed Peacemaker, lasted almost 7 years. The last aircraft built was handed over to the US Air Force Strategic Command 14 August 1954, and already 12 February 1959, the last such intercontinental bomber was decommissioned.

When creating the aircraft, the most attention was paid to the achievement of intercontinental flight range. The designers were well aware that the flight range is proportional to the aerodynamic quality of the bomber, the relative mass of its fuel and is inversely proportional to its specific consumption. In order to maximize the aerodynamic quality in the project of the future strategic bomber B-36 Peacemaker, it was decided to use a large elongation wing with laminar profiles. To reduce the level of drag, it was decided to install the engines inside the wing and use pushing screws. The smooth surface of the bomber's fuselage was also not disturbed by any protruding detail; the cockpit was inscribed in its contour, and it was decided to make all defensive installations with twin automatic 20-mm cannons retractable. According to the manufacturer, the aerodynamic quality of the bomber reached 21 units, which was significantly higher than all the bombers of those years. For example, the best American bomber from the Second World War "Boeing" B-29, the figure was 19,1.

To improve the weight perfection of the bomber, the most modern high-strength aluminum alloys 75ST at that time were widely used in its design, and the less important nodes used magnesium alloys AN-M-29. Among other things, about half of the fuselage skin was made of magnesium alloy, for this reason Magnesium Monster was one of the unofficial nicknames of the future B-36 bomber. The total mass of magnesium parts was up to 10% of the total mass of the airframe. In this case, the entire stock of fuel was located in the wing tanks compartments. The wing of the bomber, whose deflection under load reached two meters, was calculated by the designers as a dynamically elastic structure, which at the time was an innovation.

In addition to the intercontinental flight range, another rather difficult requirement of the US military was a huge bomb load. When technical requirements for the bomber were being developed, there was still more than one year before the start of the now famous Manhattan project, and it was possible to increase the strike power of the aircraft so that it could solve strategic tasks, it was only possible by taking on a large number of ordinary bombs. In order to accommodate the specified 32 660 kg bombs, the designers had to design a bomb bay longer than 20 meters and a diameter of about 3 meters. This bomb bay also defined other dimensions of the aircraft, in particular, its famous wingspan of 70 meters.

A sufficiently long bomb bay made it necessary to expand the range of permissible CGs. For this purpose, the wing of the aircraft was given a slight sweep. At the same time, the total volume of the bomb compartment, which was conventionally divided into 4 sections, was 68% of the total volume of the bomber fuselage. Very large cutouts for bomb bays forced the designers to partially abandon the semi-monocoque fuselage design generally accepted in those years. The middle part of the fuselage, located between the two pressurized cabins, was a truss structure with a light magnesium skin. The large size of the aircraft and, therefore, a very large take-off weight exceeding 140 tons, required the designers to use 6 of the most powerful engines at that time - 28-cylinder four-row Pratt & Whitney R-4360-25 air-cooled. At the same time, it was possible to design a booster-free control system for the giant bomber, which was a unique achievement of American aircraft designers. 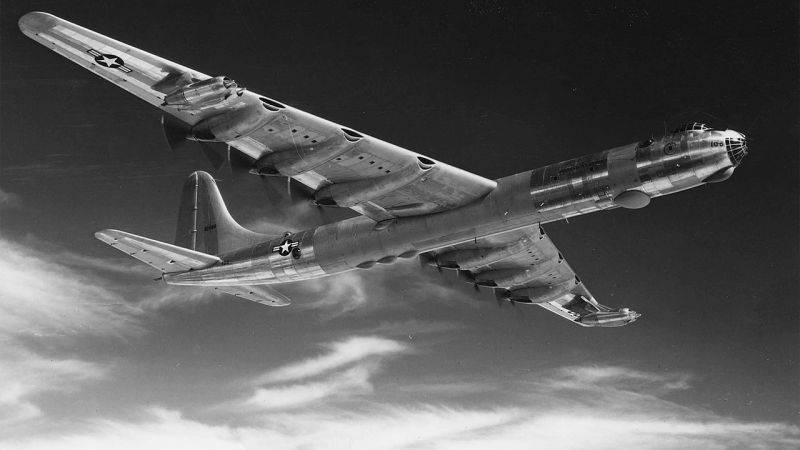 The serial production of Convair B-36 bombers continued through 14 August 1954, and significantly exceeded the initial order for 100 aircraft. A total of different types of 383 bomber was manufactured. At the same time, the bombers of all modifications, starting with the Convair B-36D model, were equipped with 4 additional jet engines of the company General Electric J47-GE-19, which had 2720 kgf each. As a result, the B-36 bomber holds an unsurpassed record as the aircraft on which 10 engines of two fundamentally different types were installed.

At the same time, jet engines were decided to use only during two phases of the flight - during takeoff and climb, as well as for acceleration and additional climb directly above the target. All the rest of the time, which made up most of the entire flight, these engines remained off. In this regard, the designers had to modify the anti-icing system, connecting the engine and pylon heating to the general aircraft system, otherwise the engines could simply become covered with ice. In addition, the bow cones of the turbofan engines received special sash with electric drive, which in the open position blocked the entrance channel when the engines were turned off. This solution improved the aerodynamics of the aircraft during cruising speeds.

Initially, the Convair B-36 bombers were intended exclusively for "carpet" bombing using conventional high-explosive and incendiary bombs. For this, the aircraft received a huge bomb bay, conditionally divided into parts. Two compartments were located in front of the wing, and two more behind him. In addition, special racks with locks were installed on the main farms of the fuselage, on which, if necessary, it was possible to mount different models of bomb racks. At the top of the bomb bay there were power jumpers, which made it possible to fix the blocks and hoists for the suspension of heavy ammunition. 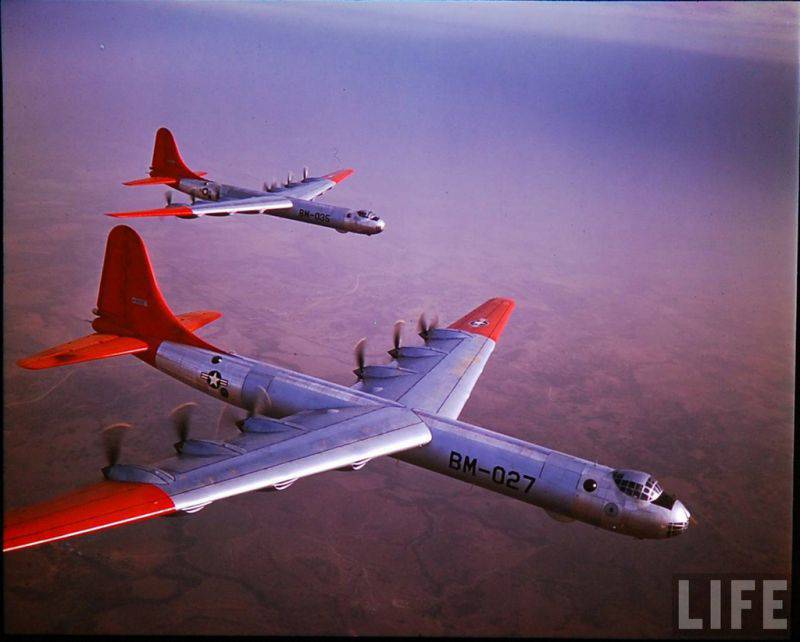 The nomenclature of the weapons used was very diverse, it included 67 items of various high-explosive, chemical and nuclear bombs and even several types of naval air mines. Bombers Convair B-36 could take on board the entire arsenal of atomic and hydrogen bombs of that period of time. We are talking about the first generation of nuclear weapons, the weight of such bombs did not exceed 5 tons. It was with such a bomb load that the plane could reach its intercontinental flight range, maximum speed and maximum ceiling, which are indicated in numerous reference books. With a maximum load of 32 600 kg, the flight range was significantly reduced. With such a bomb load the plane could not reach the territory of the Soviet Union. At the same time, using the airfields in Alaska, Great Britain, Greenland, or Guam, the Convair B-36 bomber could carry a rather heavy load to the USSR.

With the introduction of US-made B-52 airplanes by the end of 1950, the B-36 was becoming obsolete, and almost all of the vehicles were soon sent for scrap. This was facilitated by the relatively low reliability and complexity of maintenance of piston engines in comparison with gas turbine engines. The power plant B-36, consisting of 6-and screw and 4-x jet engines, had the nickname "six are spinning, four are burning." Due to frequent fires and general insecurity at the suggestion of the crews of the bombers, this formula was changed to the following: “two are spinning, two are burning, two are smoking, two are pinned, and two more have gone somewhere”.

B-36 aircraft never participated in real combat, but were widely used as reconnaissance aircraft (modification RB-36). The huge size of the bomber made it possible to install high-resolution cameras on it, and the high altitude made the aircraft unattainable for fighters and anti-aircraft artillery of those years. It is assumed that at the beginning of the 1950-s RB-36 made at least several reconnaissance flights over the territory of the USSR and the PRC. In addition, the machine was used in a number of experiments. For example, a specially converted bomber, designated as NB-36H, flew with a nuclear reactor operating on board as part of its development program. The purpose of this experiment was to study the effect of radiation on the system of the aircraft and its crew. In the end, work on the development of aircraft with a nuclear power plant did not receive development. 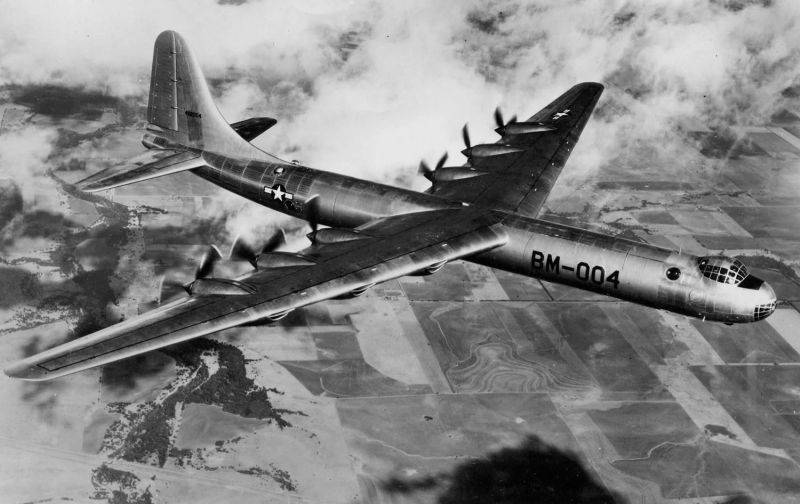 And although the B-36 bomber was never used for its intended purpose, he managed to perform a "bombing", which almost ended in disaster. It is worth noting that such episodes for the United States were not uncommon. Since 1950's, there have been 32 accidents with strategic nuclear weapons, of which 5 could have resulted in a real nuclear explosion. In one of these episodes, and participated 22 in May 1957, the bomber B-36. The plane was carrying a thermonuclear bomb from the Biggs airbase to the Kirtland airbase, located in New Mexico. When approaching the final point of its route, the bomb, the type of which was not named, simply fell out of the plane. The ammunition landed in 7 kilometers from the control tower of the Kirtland air base and only 500 meters from the Sandia nuclear weapons stockpile. The fall resulted in the detonation of a conventional explosive bomb, which in normal conditions initiates the detonation process of the plutonium nucleus. A nuclear explosion did not occur then, but a funnel with a diameter of 7,6 meter and a depth of 3,7 meter was formed at the site of the fall of the strategic ammunition. 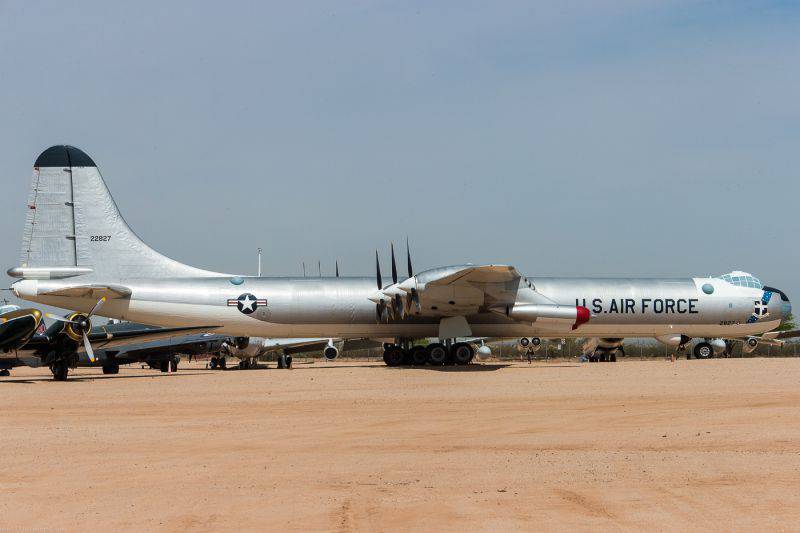 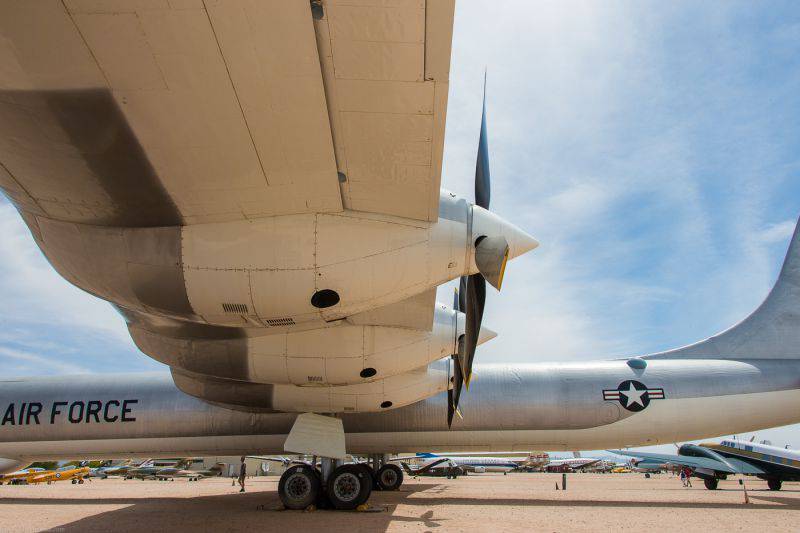 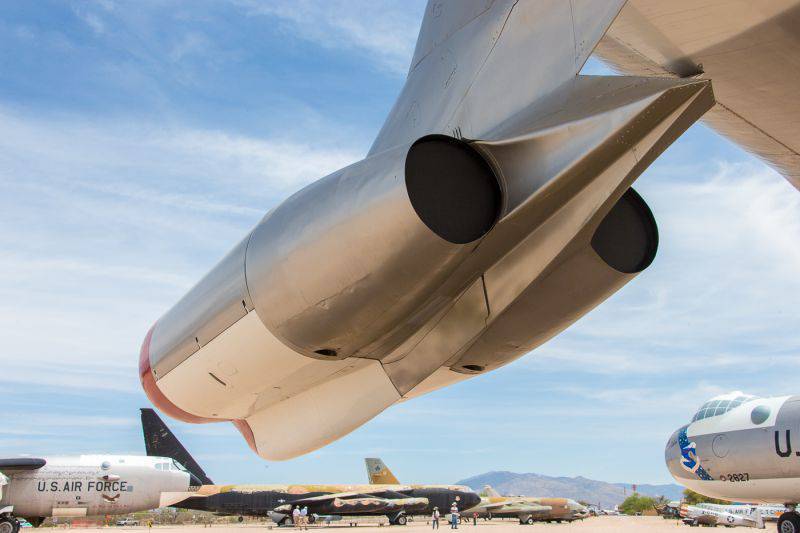 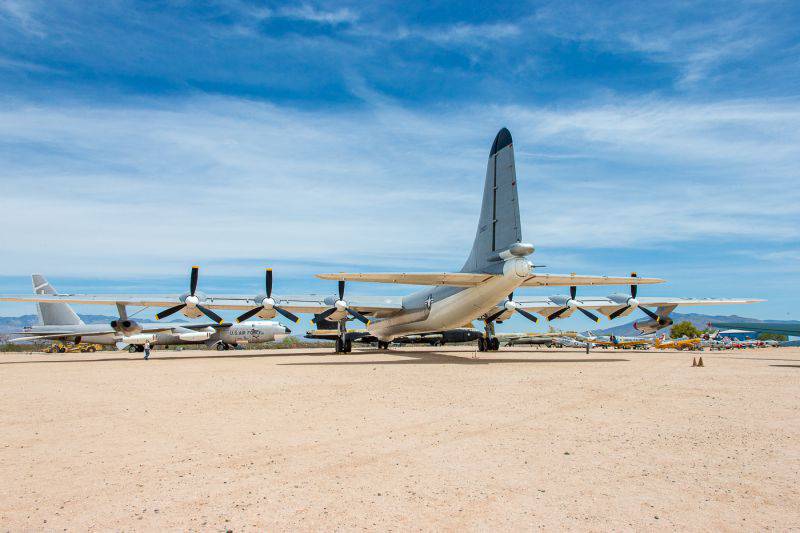 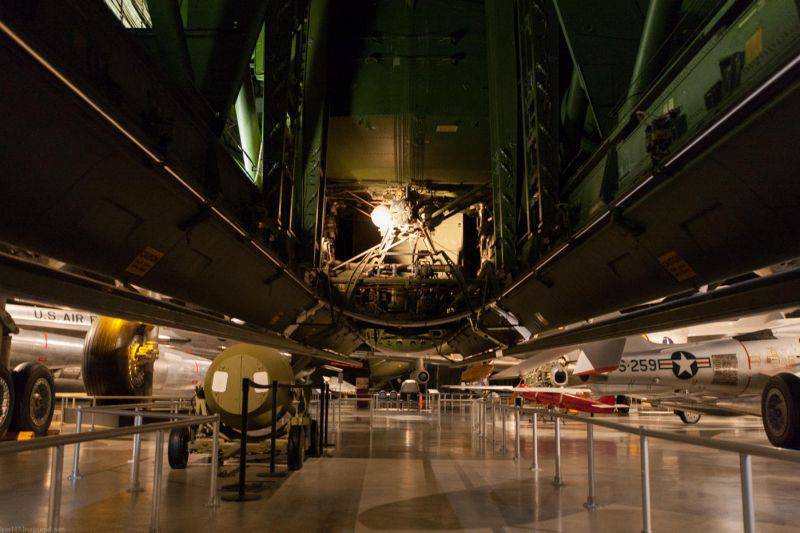 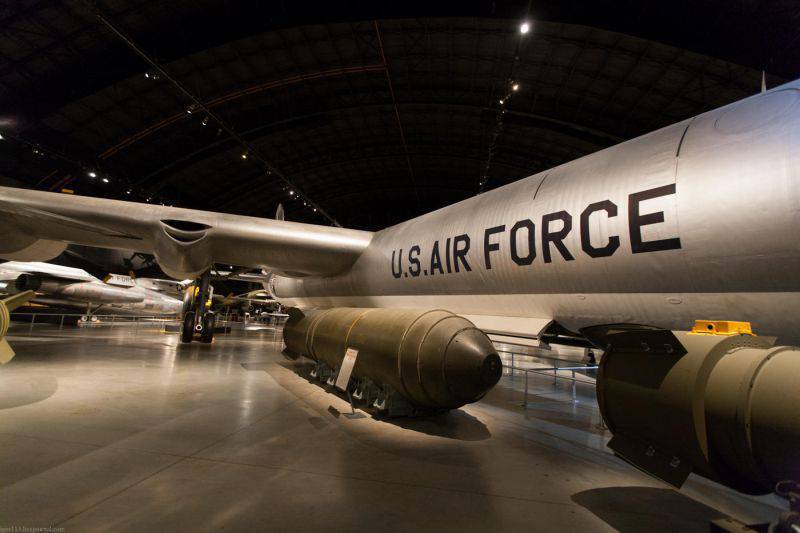