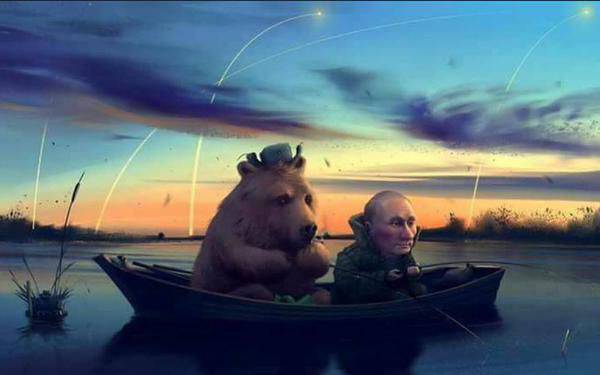 If all this did not concern murders and deaths, it would be ridiculous. Russia is quite openly making fun of America. The power with the largest military budget in the world turned out to be completely defenseless before the cruel jokes of a supposedly isolated and economically sinking country, which 25 lost to the US Cold War years ago. Russia behaves like a hooligan who stole breakfast from a classmate and now chuckles at the fact that he only had enough for lamentation.

To begin with, the Russian invasion of Syria caught the American intelligence services off guard just as a year ago the invasion of the Crimea and the hybrid war in the east of Ukraine. And by some coincidence of circumstances, each time during these moments, the public is told by Edward Snowden, who is staying in his Moscow shelter, to emphasize once again the helplessness of the American intelligence forces.

In Syria, Russia was not lazy and began to bombard not only the Islamic state, but also opponents of the Assad regime, including the militia, armed with the CIA and American allies. The message to the rebels: communication with the USA will not only not help you, but will also make you a target. Washington will not help these allies. Fortunately, these are the detachments in which the CIA was involved, and the American obligations towards them are not clear. It would be worse if the Americans succeeded in their training program for the Syrian opposition, which the army was engaged in. In June, US Secretary of Defense Carter announced that the United States could stand up for their defense. Fortunately, there are practically none on the battlefield, so the United States does not even have the opportunity to throw them at the mercy of the Russians.

The air strikes were preceded by a brief warning, transmitted by the Russian general just a few hours before the operation began, to the US military attache in Baghdad, that the Americans should free up the airspace over Syria. All subsequent days, the Russians regularly invaded the airspace of Turkey, a NATO member country (American planes take off from the local Incirlik base for strikes against ISIS). Turkey claims that in one form or another provocations - border violations, radar surveys - occur the last five days every day. Once, because of the Russians, American fighters had to interrupt their mission and return to base. Russian planes are watching American spy drone over Syria. “When it happened for the first time, we thought that the Russians were lucky. But then it happened two more times, ”said an American source. And so on.

Now it doesn’t matter what tactical and strategic success the Russians achieve. The first Syrian offensive with the Russian aviation the support, according to the first data, was not very successful - primarily thanks to the American TOW anti-tank missiles in the hands of the rebels. Everything can change when Russians and Syrians agree on tactics. And if all else fails, then they just start to lie. An important role is played by the effect itself. Otherwise, why would the Russians launch a missile strike from ships in the Caspian Sea thousands of kilometers away if they could do the same from a ship in the Mediterranean Sea 150 km from the target? The fact that Russia has cruise missiles is not for initiates news. But the effect is important. Russia demonstrates that it is free in its actions.

I followed the American reaction with sympathy. It turns out that postmodernist politicians command an imposing military machine, and Putin’s behavior goes beyond their understanding. President Obama and Secretary of State Kerry, as a rule, teach Russia in their speeches: they say, it is on the wrong side storiesand its strategy does not contribute to stability in the world, etc. As if Putin is interested in it! In fact, for several years now he has been demonstrating to Obama that history is not on anyone’s side, and that the Russian president is not taking the entrance examination to Harvard.

This week, Secretary of Defense Ashton Carter criticized the Russian strategy, calling it “erroneous”: “Russia's strategy is erroneous. Russia continues to strike non-ISIS targets. We believe that this is a fundamental mistake. ” “Thank you for your concern,” smiles from Moscow are already heard. Best of all, the Russians made it clear what they thought about the concerns of the Americans when they began expert negotiations on the topic of “deconflicting” with them, that is, how to prevent their planes from colliding with Syria. A recording of the talks (and this was a video conference) was posted on YouTube. Of course, this is a violation of any staff culture. And the cadres themselves: the Russian generals are sitting with mocking and bored faces, as if they say: “Look at the other side - some civilians and a woman!”

Russian freedom of action and American moralizing helplessness reminded me of a sketch that we once played in a scout circle where I went. A scene called “Youldal” looked like this.

The old gentleman is watching the peasant Youlddal, who is hammering his horse: “Youldal, leave the horse alone!” - calls the old man. When his words remain unheeded, he threatens Youldal: “Wait, I'll bring my son, and he will show you!” He does just that and in the presence of his son repeats his call: “Youldal, leave the horse alone!” Youldal does not pay attention and when the grandfather does not let up, he turns to him and threatens to whip: “Do you also want to receive it once, grandfather?” And then, finally, the son intervenes: “Dad, let's go, because this person can kill you!”

Of course, the situation has its own not too comical aspect. It is this tactic of Russia that justifies itself. The further, the more aggressive and dangerous maneuvers of its military aircraft near European borders, arrogant but thoroughly thought-out provocations, such as the abduction of Estonian policeman Eston Kohvera from the state border only a couple of days after Obama’s visit to Tallinn, and if you look deeper into the past, then we can recall, say, the systematic non-observance of the START and INF treaties on disarmament - the West did not react to all this at all (imagine that NATO would put weapon Ukrainian army and bombed the rebels in Donetsk and Lugansk). The fact that the West sometimes and inconsistently calls things by their names, we can consider the maximum of the possible. He cannot effectively "troll" Russia. And this problem is connected with mentality, but not with abilities.

Here you can say that it is necessary for sober heads to win, that not giving in to provocations is just the most important thing. This is of course so. But consider the other side: the strategy of sober heads is also risky. First, it contributes to the collapse of the Western coalition. Many states may conclude that alliance with the United States does not provide reliability and security. Secondly, there is a danger that is not very well understood, because it does not fit into any of our favorite historical analogies: this is not Munich or the First World War. Russian provocations, to which it was necessary to respond, but this was not done, will be aggravated until postmodern America can no longer respond. The loss of prestige can simply result in a real loss of power. And then it can become bad - worse than someone thought.

We are in Yandex Zen
Results of the week. “Tut's neighboring state was threatened with war. Lend, please, half a dozen millenchik on militaritskih goals "
Edward Snowden as a phenomenon of an empty chair
74 comments
Information
Dear reader, to leave comments on the publication, you must to register.