What China is silent. Should I count on a "second front"? 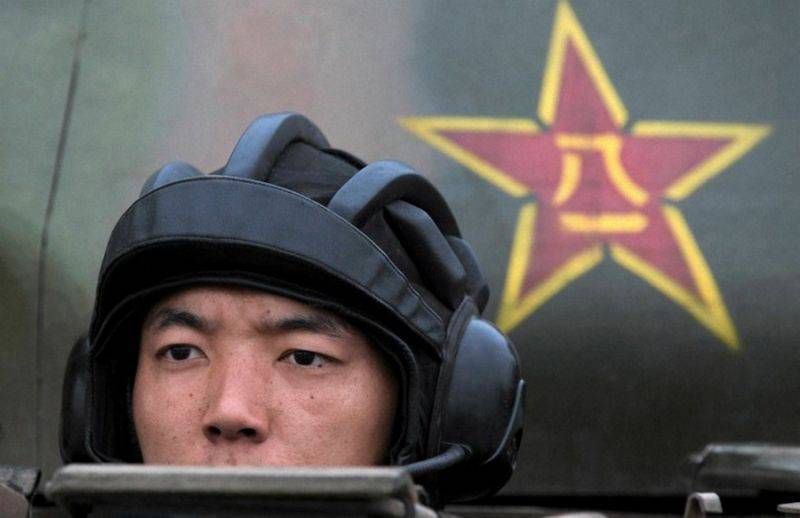 In the evenings different thoughts come to mind. Especially if you read, for example, the following: “The autumn wind. As of old, the wind howls. But everything was different in the world. ” Or: “I fill a glass, pour wine into the river. Waves of feelings rise in my heart. ”

The poems themselves are average. The phrase “pouring wine into the river” is especially cynical, but, on the other hand, it becomes clear - the person who wrote is not Russian. Transfer. Which language exactly? From Chinese. Well this is Mao Zedong!

Yes, for a long time did not remember about him. Meanwhile, some of his thoughts sound very fresh. For example:

"... Political power emanates from the barrel of a rifle."

“... After the victory in World War II, American imperialism, along with its henchmen in various countries, replaced the fascist Germany, Italy and Japan and frantically prepared a new world war, threatening the whole world. This reflects the extreme decay of the capitalist world and its fear of the approaching doom ... This enemy has a weak basis, disintegration occurs in its camp, it is cut off from the people, and he cannot get rid of the economic crisis, therefore, he can be defeated. ”

“... American imperialism seems to be a colossus, but in fact it is a paper tiger and makes death attempts. The day will certainly come when the American reactionaries will find that all the peoples of the world are against them. ” 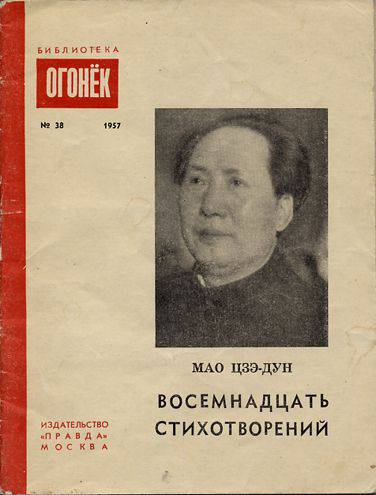 Looking forward. By the way, isn't it time to republish the sample from the quote book + Mao's verses as a separate volume? This is a question for publishing marketers.

But the other is more relevant - how are today's compatriots of Mao react to the position of Russia and the events of the anti-terrorist operation in Syria? In the sense of participation in the anti-Igilov coalition. After all, every day, from various sources, there are reports that China either began to provide support to Russia in Syria, or is about to begin.

Thus, the Voice of Beirut radio station, referring to high-ranking officials in the Hezbollah group, reported on the upcoming transfer of soldiers from the People’s Liberation Army of the PRC to the Middle East. Turkish newspapers publish large condemning articles in the sense that China’s participation in the military operation only exacerbates the chaos (“just don’t do it !!!”). They note that the Syrians in the demonstration in support of President Bashar Assad expressed their gratitude not only to Russia, but also to China. They write about the possibility of intervention as an event almost ...

Meanwhile, not a single fact of Chinese participation in the military operation was confirmed.

The message about the Chinese aircraft carrier "Liaoning-CV-16", which allegedly arrived in the Syrian port of Tartus, accompanied by a missile cruiser, turned out to be a fake. The “information from Israeli intelligence” about the appearance in Syria of a Chinese squadron invisible to radar fighter-bomber J-15 “Flying Shark”, as well as helicopters “Z-18F” to fight with submarines (whose? Not Igilovsky! ) and Z-18J helicopters - flying early warning systems (from whom?). About 1000 Chinese marines is also nonsense. But the press is swallowing everything properly ...

We will try, basing on different sources, to clarify the situation a bit. Interesting opinions and analysts, and the reaction in social networks. For example, Chinese. In China, almost half of the population (more than half a billion) use them constantly. This is Sina Weibo - the Chinese version of Twitter, Renren - “Chinese Facebook”, Douban, Wechat, etc. It is difficult to imagine, but users of China’s social networks are preoccupied with terrorism and ISIS even more than Russian networks. Therefore, Putin for them today is a hero.

The fact is that terrorism has already come to the streets of Beijing. Terrorist attacks occur periodically in the Xinjiang Uygur Autonomous Region of China, Muslim. But in the information policy, Beijing adheres to the principle of keeping silent about such crimes or even distorts events in the direction of “smoothing”. In and of itself, this seems to be quite good: it significantly reduces the “damaging force” of the terrorist attacks, the most important component of which is the “wave” in the mass consciousness. Yes, no matter how you feel about this, social tensions are declining, but this approach steadily gives rise to rumors - it creates the impression that the authorities are constantly holding back.

But the discussion of the problems of terrorism is full of social networks. That is why the antiterrorist part of Putin’s speech at the UN about ISIL received a huge response in Chinese networks. It is customary to speak cautiously on the Internet sites there, but the Chinese, comparing Vladimir Putin’s speech with Xi Jinping’s speech, put Putin much higher. They note that Xi Jinping’s speech concerned the use of natural resources and finances, while Putin spoke about terrorism, which particularly worries the Chinese, about what specifically needs to be done with ISIL. The Chinese, as Putin said, were very diplomatic and hard. In the Chinese networks they write that they would like the same determination from their leadership.

Some believe that China did not show itself in the fight against LIH and expressed hope that it was caused by Xi Jinping’s statement that a quick-response peacekeeping contingent of 8000 people was forming in China. “What contingent?” - Internet users are wondering. It is not clear what he will react to, what goals to decide and where to base, for China itself, where there are armed forces and militia, does not need such a formation. There are versions that it is about the deployment of forces like the UN "blue helmets" for joint operations with Russia. "It is possible that a decision has already been made on joint efforts to suppress ISIS." Although there was no official meeting between Putin and Xi Jinping at the UN, it is speculated at the forums that such meetings were still, only secret, and they are probably related to China’s preparations for military operations in the Middle East.

Regarding the Russian operation in Syria, well-known Chinese analysts speak out. Thus, political analyst Feng Yujun in the Chinese edition of the Global Times writes that in one move Russia gains many victories. Do not assume that the goals of Moscow are simple, the author says, it’s not just a blow to terrorists or an ally’s support, Russia simultaneously solves the problem of oil prices, becomes stronger in the Middle East and compensates for mistakes made in Ukraine. By strengthening its bases in Tartus and Latakia, Russia is protecting the passage from the Black Sea to the Mediterranean. In addition, these bases create a serious counterbalance to NATO forces.

But the Kremlin’s plans are not limited to this. According to the Chinese expert, the United States is now leaving the Middle East region and is focusing its attention on the Asia-Pacific, building up pressure on China. As a result, a vacuum has developed in the countries of the Arab world, which has not existed since the end of the Cold War. Russia seized the moment to take an empty place with its high-tech armed machine, restore its influence in the region, and also approve the “Russian great-power self-esteem” that the country and the people so need.

The very fact that, by this operation, Russia “wiped the nose” of the United States and NATO, according to the expert, significantly increases the morale of the Russians. At the same time, in Syria, Russia does not intend to "fight to the death" with America, it only implements its carefully thought-out plan for alternating attacks and waste, carrots and carrots, attacks and compromises. Finally, the operation in Syria distracts Saudi Arabia from dumping oil prices, and Iran from entering the energy market. The general instability in the main oil-bearing region leads to a rise in price of black gold.

It should be noted that in the Chinese expert community, after the start of the Russian anti-terrorist operation, the prevailing opinion is that China should wisely adhere to a neutral position, but at the same time support Russia diplomatically and morally. In general, China’s military involvement in the operation against ISIS is assessed as unlikely. It is also unclear which, in principle, China can provide support, given that from China to Syria more than 8 thousand nautical miles. To contain a military group there, you need a powerful fleet to supply it, and the effect is unclear. Chinese aviation? But the Russian air base is small and is currently busy. So, you must first create your own air base. What for? Submit an aircraft carrier? (See about fake above.)

Representatives of the Ministry of Foreign Affairs of the People's Republic of China refute the information about the possible participation of Chinese military aviation in the operation of the Russian Aerospace Forces against LIH. This October 8 official spokesman Hua Chunin said: "We do not have information about the possible participation of the Chinese Air Force operations in Syria." At the same time, according to her, China supports the actions of the international community to prevent terrorist activities: “We hope that all parties will strengthen dialogue and cooperation in countering terrorist threats.”

Most Russian experts believe that China does not fit into a military operation in Syria. “Traditional Chinese politics is not to get involved when it is very dull, when too much interest intersects,” says Sinologist Bronislaw Vinogrodsky. “Beijing is never in such affairs, especially in the absence of direct interests.” According to him, this approach is so stable that if the troops of the PRC do find themselves in Syria, this will mean a radical change in the principles of foreign policy.

The head of the department of comparative political science at the Peoples' Friendship University, political scientist Yury Pochta also believes that the Chinese are trying to distance themselves from the conflicts of others in principle, as they are trying to pursue a policy of non-conflict existence. How long this can last is unclear, because in recent years the Chinese government has been making territorial claims to almost all its neighbors ...

At the same time, no one excludes that in Syria, a subgroup of Chinese ground forces, or special forces, can fight with ISIS, if necessary. If, nevertheless, China opens the “second front”, experts say, joint Russian-Chinese actions in Syria will become a global event - they will change the whole world balance, both political and military.

In general, bad feelings were premonitored by American analysts when they first observed Xi Jinping next to Putin at the Victory Parade in Moscow, and then Putin at a military parade in Beijing.

Of course, relations between Russia and China are much more complicated than simple allied ones. Exercises are carried out both on land and at sea. But China has its own agenda, Russia has its own ...

Why are you silent, yellow-faced brother? “Il shakes you like a mast when the waves went to the Yangtze?”

As they say, it is unknown where the waters of the Yellow River will take us ...

Ctrl Enter
Noticed a mistake Highlight text and press. Ctrl + Enter
We are
About Stalin and KhrushchevLanguage and politics. Russian language space is shrinking from year to year.
75 comments
Information
Dear reader, to leave comments on the publication, you must to register.