October 16 2015
22
This is a continuation of an article about carbines of the KS-23 family. The first part is HERE. 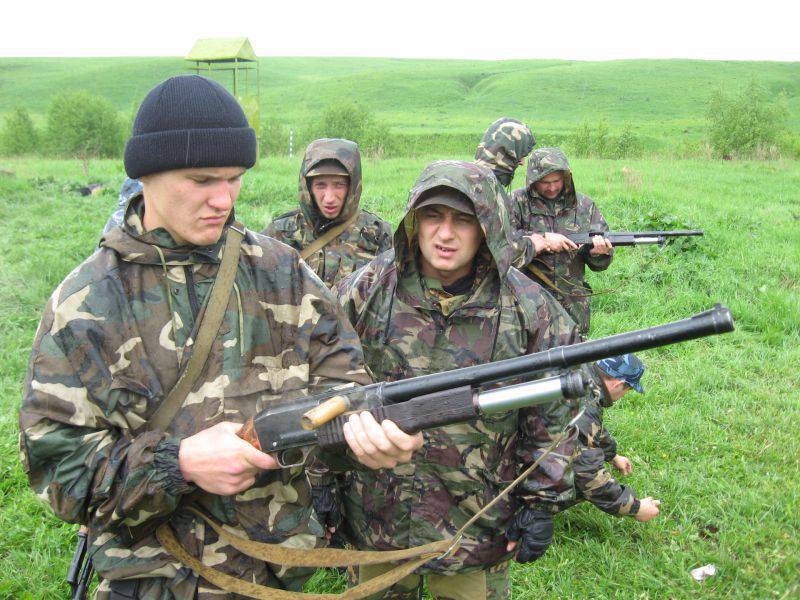 KS-23K is a further development of the theme “Thrush”. It was created by experts of the Tula KBP in 1998, based on the main components and mechanisms of the KS-23 and KS-23M Drozd carbines, namely the trigger and the barrel.

The KS-23K was born because the security officers were not quite satisfied with the previous modifications of the KS family carbines because of the small capacity of the tubular stores used in them, the low rate of fire and the inability to quickly replace one type of used ammunition with another, for example cartridges with gas grenades for bashing or shotgun cartridges. In addition, the dimensions of the above samples weapons proved to be unsuitable for use in cramped spaces.

Taking into account the wishes of the operators, the Tula gunsmiths decided to equip the new model with a detachable box magazine with a capacity for 7 cartridges, and
To make the weapon smaller in size, the “Bull-pap” layout was used with all the technical solutions that are inherent in this layout.

The reloading is carried out with the help of a mobile forearm, which is rigidly connected to the bolt.
Thanks to the prompts of the users of “Sanya.vorodis” and “Gross kaput”, it became known that the handguard is connected to the bolt with a single thrust, which is located on the left side.
This solution was applied to the hunting pump guns TOZ-94, TOZ-194 and IL-81.

The fuse of the KS-23K is mechanical, flag-type and located above the pistol grip, on the left side. The ejection sleeve window is located on the right side of the receiver. The ejector window is covered with a special plate that opens only when the shutter moves backward to eject the liner. The store latch is located behind the store receiver. On the back of the receiver has a rubber butt pad. The sight of the carbine KS-23K unregulated, open type. The high sight frame serves as a handle for carrying the carbine.

Initially, the production of carbines KS-23K was established at NPO Tekhnika, which is now included in the PKU NPO STiS of the Ministry of Internal Affairs of Russia.
Whether the KS-23K is being produced now, whether they are adopted and whether they are used are questions that I haven’t found the answers to.
Most likely, the KS-23K were issued in a limited test lot and were no longer produced.
At least in the official list of weapons, which is in service with the Interior Ministry carbine KS-23K missing. 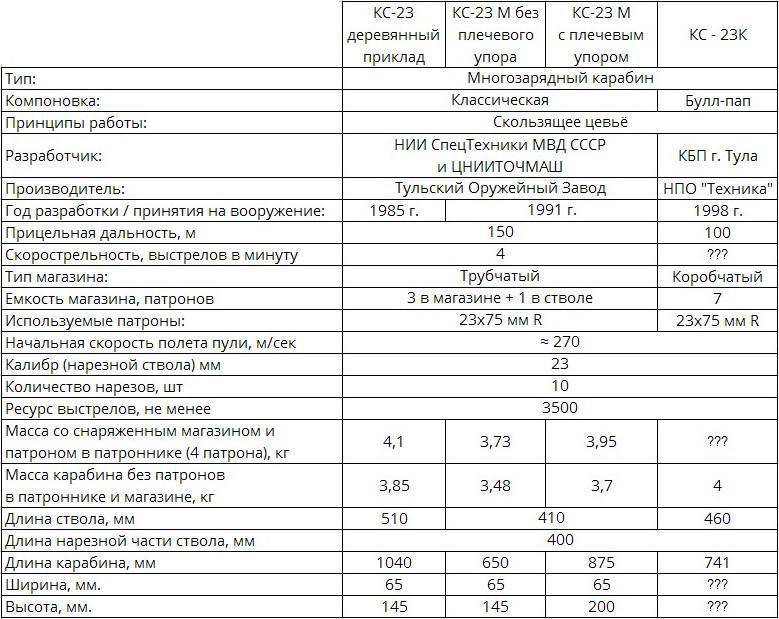 Civilian version of the carbine KS-23

As a result of the mass conversion in the middle of 90, the Tula Arms Plant offered hunters a modern interpretation on the subject of the “weaver”.

It was a TOZ-123 pump shotgun for amateur and commercial hunting of the 4 caliber (23,75 mm) for special shotgun cartridges 4х81. The TOZ-123 rifle was developed on the basis of the KS-23 carbine and in fact differed from its “donor”, ​​except that it had a smooth bore (without rifling) and the ammunition used. In English Wikipedia it is written that TOZ-123 tried to offer and for export. In particular, the manufacturer was interested in supplies to the American market, but the Clinton administration imposed a ban on the import of TOZ-123 in the USA. 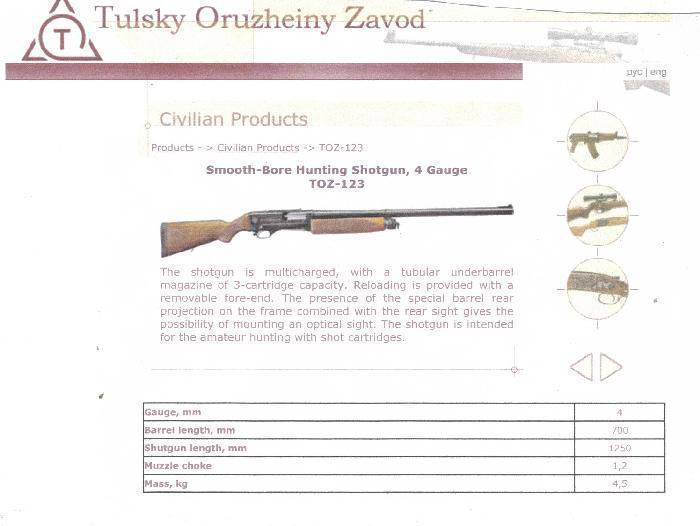 TTX TOZ-123. Screen of the page that no longer exists. It was posted on the website of the Tula Arms.

The “Drake-4” is a heavy, powerful gun, so it turned out to be of little use for hunting in its modern sense. Therefore, sensible hunters did not see the point in using such a mortar. The gun was bought either by novice hunters, or simply by collectors of interesting and unusual types of weapons, which in the vague 90 were not so many. The demand for the gun “Drake-4” was so low that its production quickly turned.

It was not possible to find out the exact number of shotguns produced, but, most likely, the total number of produced “Drakes” hardly exceeded 150-200 units. 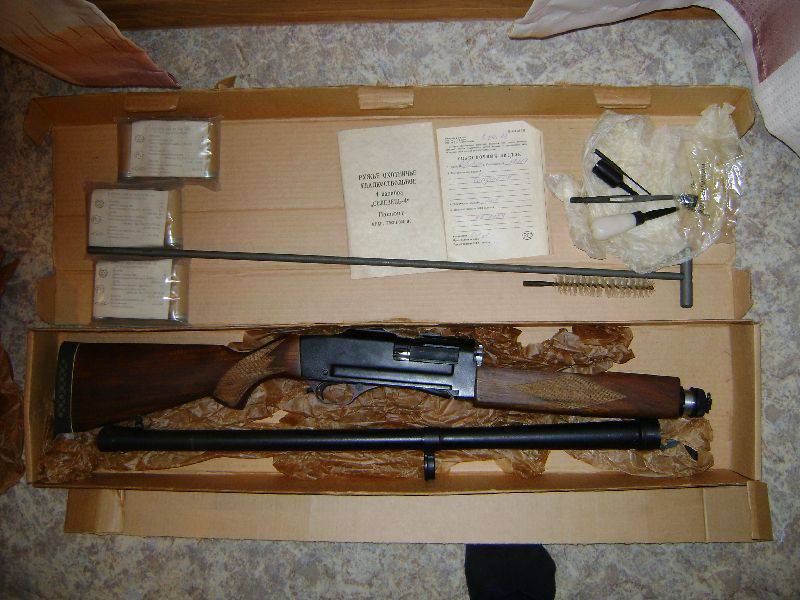 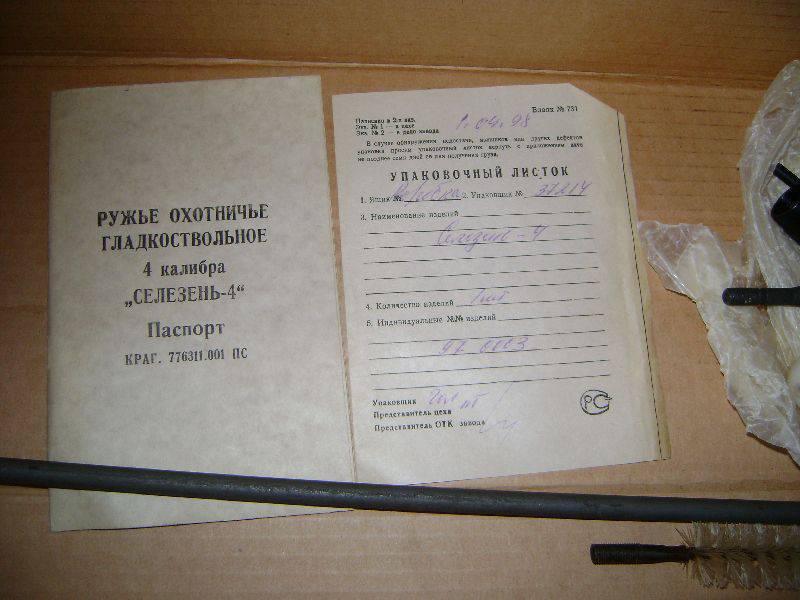 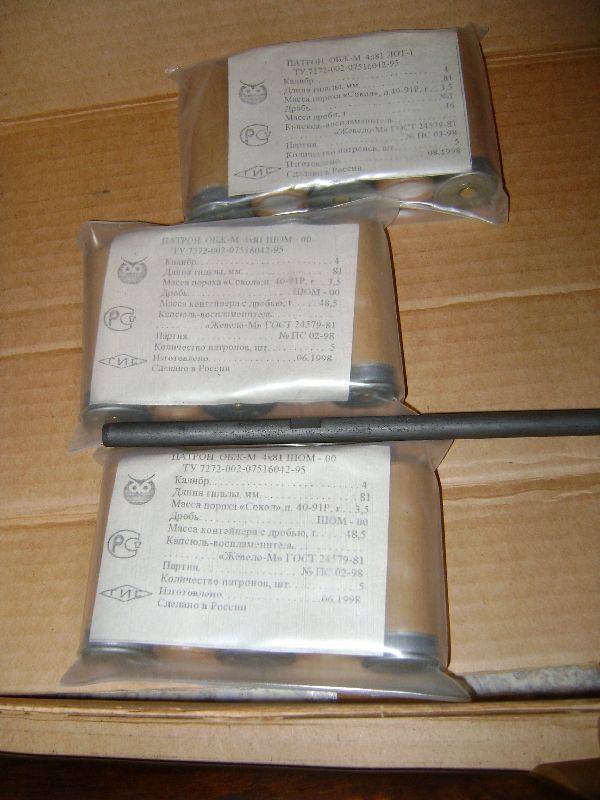 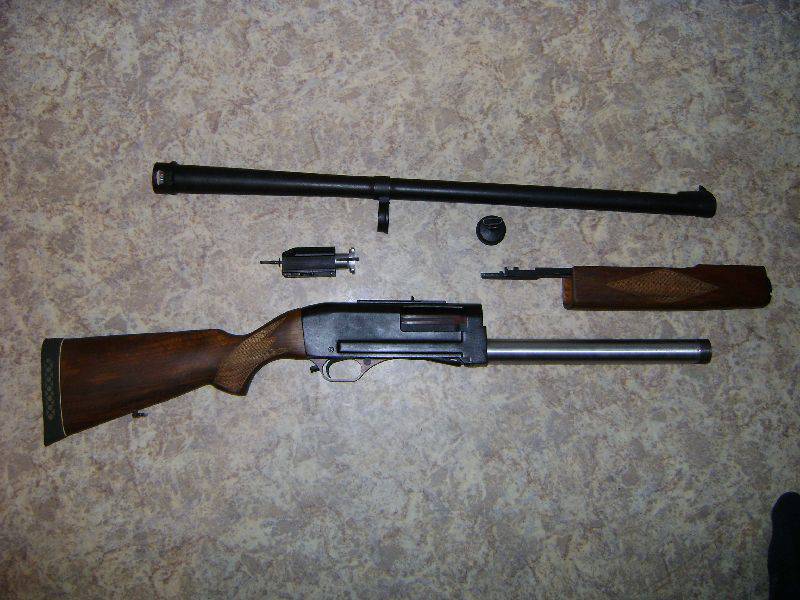 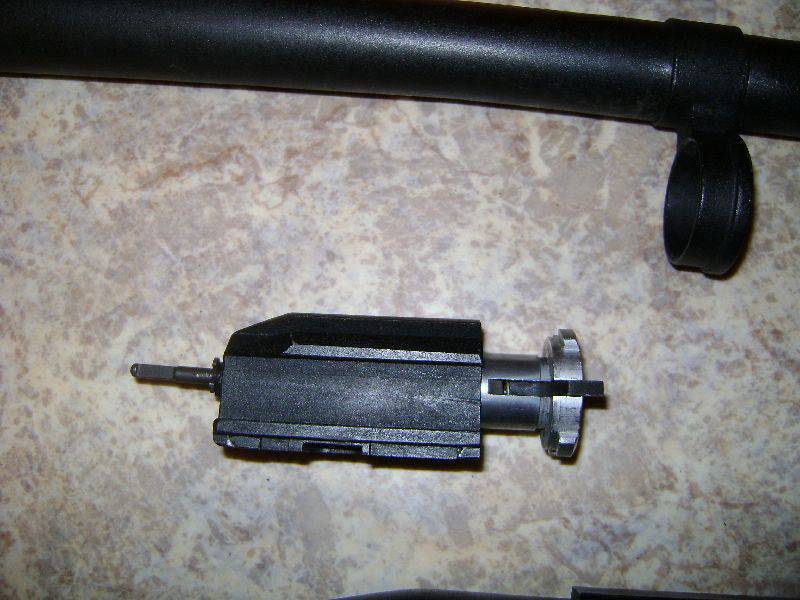 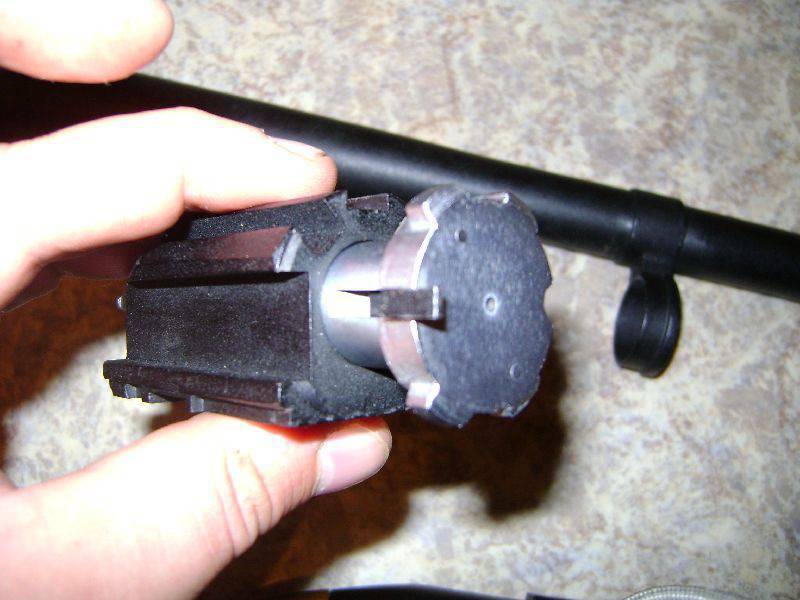 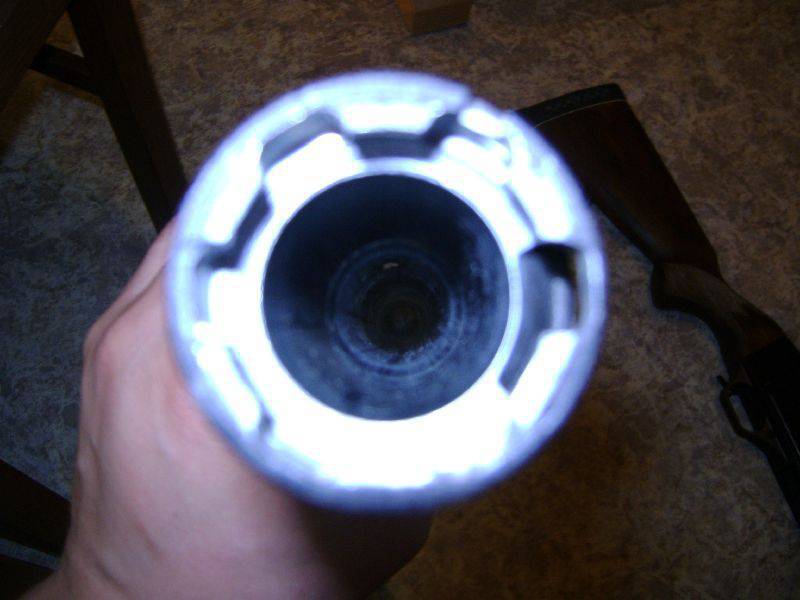 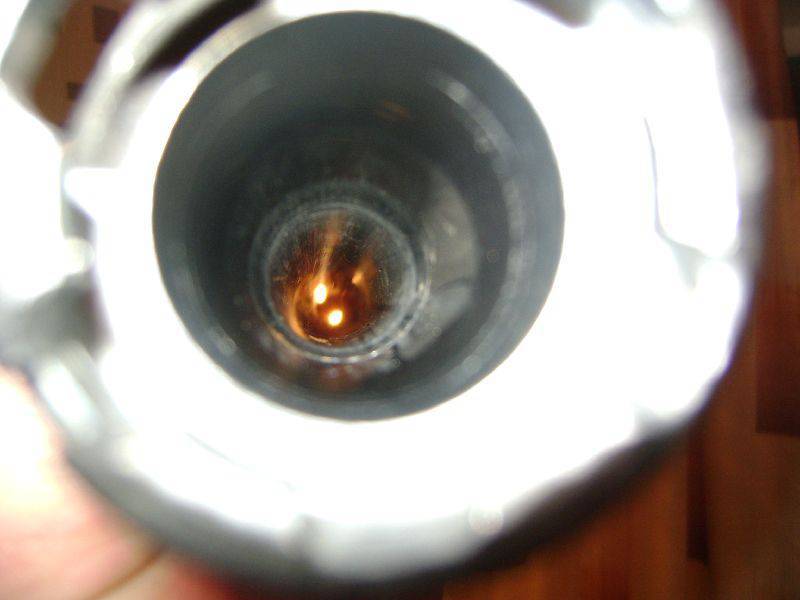 The gun “Drake-4” barrel without rifling. 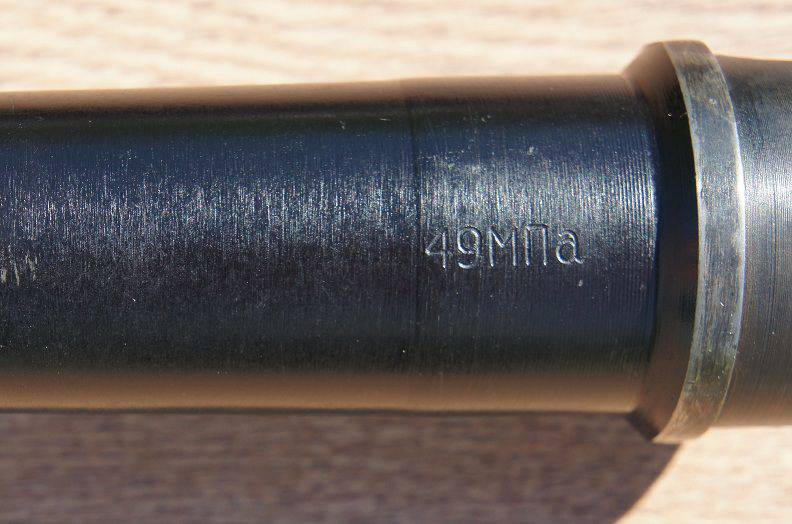 Today, “Drake-4”, due to its limited circulation and unusualness, causes a greater interest among weapon lovers and collectors of weapons than in the dashing 90. Therefore, there is a small but steady demand for second-hand “Drakes”. 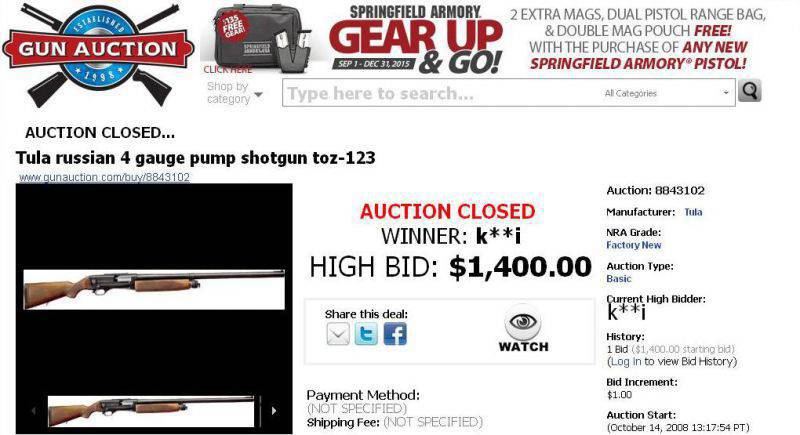 I want to note that the sale or purchase of this giant “pump” is no different from the design of other hunting rifles of a smaller caliber. From August 1996 of the year “Drake” can be bought, and then registered with the Licensing Authority Department and used for hunting, sports shooting or self-defense.

Cartridges
While the “Drake” was produced and over the next few years after its removal from production, VNIItochmash produced 4 caliber cartridges with a hinge of Sokol brand powder 3,9 gr. and 47 gr. fractions. The weight of the fraction in these cartridges could be surprising: after all, any magnum - the cartridge of the 12 caliber has 48 grams of fraction. However, according to experienced hunters and owners, “Drake” can withstand shots with self-loaded cartridges, with a weight of up to 65-70 g fraction. This possibility to some extent justifies the sense of a gun as utyatnits.

Self-equipment of cartridges is the only thing that remains for the owners of “Drakes”: they are not on sale, as cartridges have not been produced for a long time. But this occupation is not simple. There are no 4 caliber sleeves for sale, no pyae containers, no devices for home assembly of cartridges. The owners of these guns can only buy gunpowder, shot and caps. Therefore, savvy owners of “Selezny” use cardboard sleeves from 4 flare calipers for cartridges to assemble cartridges. Cartridges for rocket launchers are still being produced, and the standard primer can be replaced with the one you need.

For the same purposes, with minor alterations, even sleeves from aviation systems for shooting heat traps of the ASO type. The procedure is as follows: an electric capsule is removed from the shot casings from the ASO, then a bushing is installed in its place, into which standard capsules such as “Zhevelo” or KB, which are sold in hunting stores, are pressed into it.

On the basis of the KS-23 carbine, one more sample of civilian weapons was developed for the 16 and 12 caliber cartridges: the Bekas smoothbore shotgun. “Snipe” and its numerous modifications are made at the “Hammer” factory. 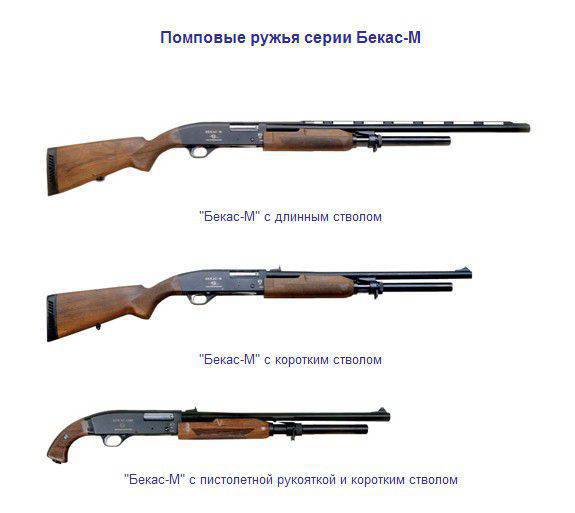 His история It began with the fact that at the beginning of 90-s, TsNIItochmash specialists turned to the Hammer VMRP and proposed to develop a civilian pump-action pistol based on the same K-23 carbine. At the Vyatka-Polyansky plant, no one had any experience in designing smooth-bore hunting weapons, but a month later a rifle was developed for ammunition with a short sleeve 16х35. Soon they made a prototype, which, given the weak cartridge and a large mass of weapons, caused only surprise and smiles. The work continued, and a prototype was born under the once popular cartridge 16x70. In 1997, a trial batch was made that did not exceed the 20 trunks. After passing the test appeared "Snipe" in the base case.

Since then, 18 years have passed, but “Snipe” is made to this day, and all new versions and modifications appear. Currently available on the market is a self-loading version of a rifle called “Bekas-avto”, which is produced by “Molot Armz”.

Carabiner KS-23K was developed in KBP, at the end of 90-s. In parallel with it, a branch of KBP (TsKIB SOO) was engaged in its own development, as a result of which a special carbine OC-28 appeared. The OTs-28 did not come into service at least for economic reasons: its production was more expensive than the KS-23K, so the latter was adopted.

About sighting devices I have no data. It is possible that the rear sight is located on the upper part of the receiver, and with the folded shoulder rest (in the folded handle) - covered diopter sight, as in the M16.

A wide range of 23-mm cartridges for carbines of the KS-23 family gave impetus to the creation of cheap single-shot products.

In the Research Institute of the Special Machinery of the Ministry of Internal Affairs they remembered the German Sturmpistole and developed an insert rifled barrel-liner for installation in the GP-25 "Koster" grenade launcher. Replaceable stem called "Larry".

Not ignored and SPS. Using the rocket launcher of the Second World War as a prototype, they developed a single-shot rifle of a turning construction, which received the OF-93 “Farmer” index.

On the base of the crop from the OF-93 was developed a pistol that received the index "Tulyak". 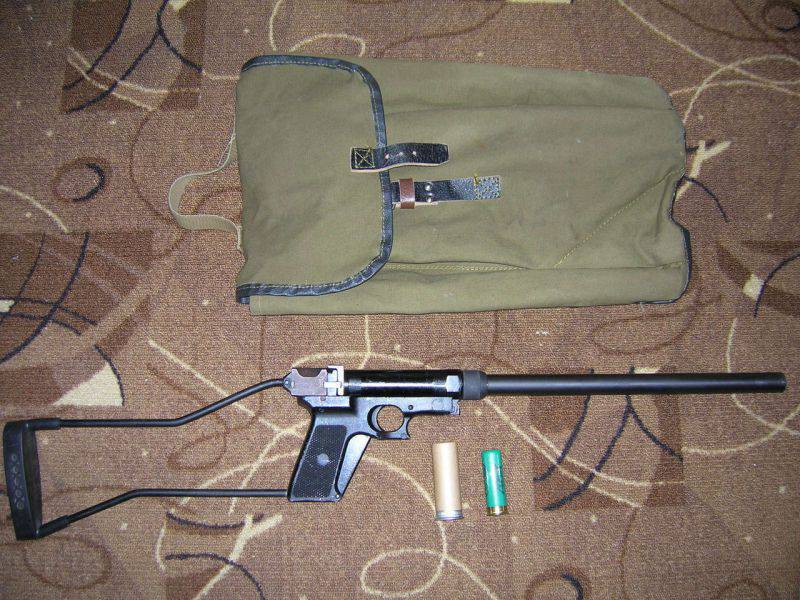 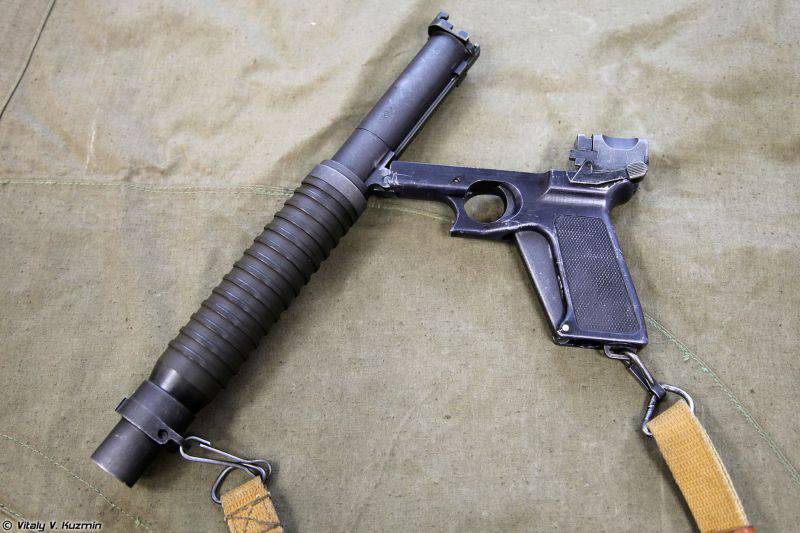 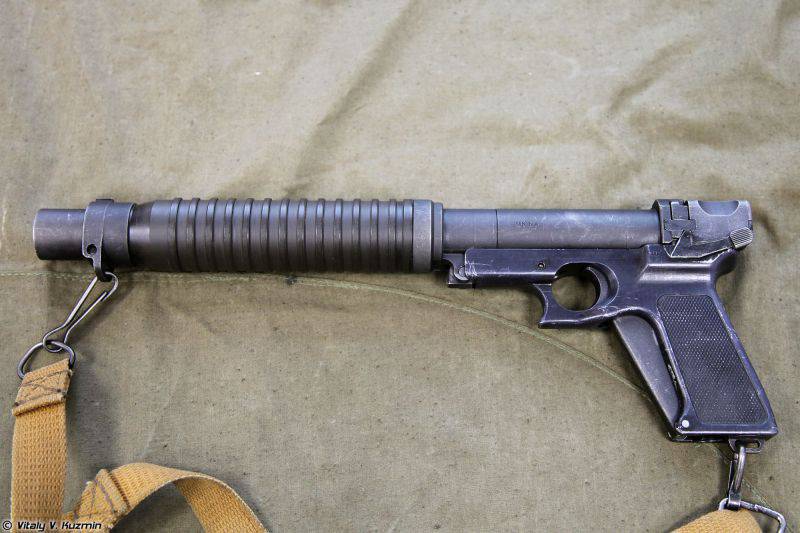 Pistol 'Tulyak', developed on the basis of OF-93

This is all that I was able to collect and organize on the subject of 23-mm weapons of Soviet / Russian development.
I will be grateful to you for any additions and comments.

Finally, I would like to share the document “Technical Description and Operating Instructions of the KS-23”. I posted it on Google Drive for general use. The document is in PDF format and is located HERE. It can be opened and simply viewed or downloaded and saved on your computer.

Thank you for attention!