Christmas tree on a stick, or How to force labor migrants to transfer money to Ukraine

October 13 2015
90
A strange thing happens in Ukraine. More and more Ukrainians are leaving to work abroad, and transfers from them are becoming less and less. It is not right. Under the dictator and the thief Yanukovych, when there was industry in the country, trade and a lot more, it was possible not to see how much it was translated. And now...


Now remittances are an item of income in the Ukrainian budget. And such a decent article. As a matter of fact, for Ukraine labor migrants, the Ukrainian Goskomstat perfectly shows. "From workers with love!" From which countries Ukrainians receive money: 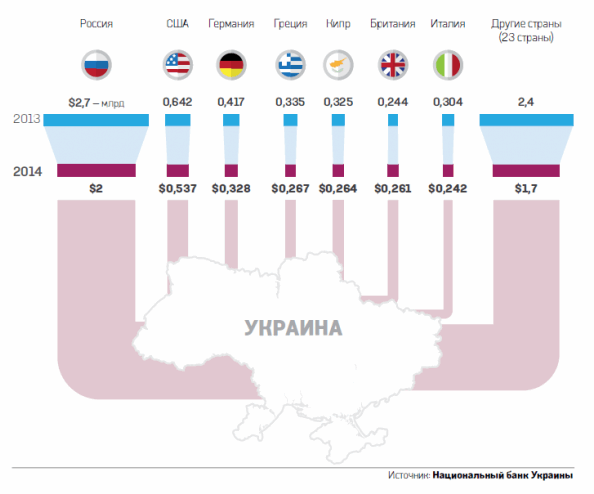 If in the 2013 year, 2,7 billion dollars were transferred from Russia to Ukraine through various banks, then in 2014 there were only 2 billion. Where did the 700 million go? Yes, even at a time when Ukraine is heroically at war with Russia! But Russia has always fed the Ukrainians the most.

Of course, you can roll your eyes and thoughtfully conclude about Peremog and the aggressor country. It seems that patriotic Ukrainians do not want to build palaces and repair apartments "Katsapsins". Patriotic refuse, and all. It seems like unworthy of the "Mordovians" of such a great honor. May the representatives of this intelligent and kind people forgive me, but it is the Mordvinians, according to the Ukrainian version, who are the most common among us. And the Minister of Foreign Affairs of Ukraine is also a representative of the Mordovians.

But then who do the Ukrainians build? Americans? Germans? To british people

There is nothing easier to see and go there. Are they building in the USA? Well yes. For 2013 a year, 642 had already transferred millions of rubles with the presidents to Square. In the past, all 537. Does this mean that these snickering Americans are not worthy?

Well, it will be little things. Let's think globally. In 2013, all transfers were already 8,5 billion dollars. And in 2014, the volume fell by a quarter. By the end of this year there will generally be a full seam.

What is the reason for such a fall in cash receipts for Ukrainian families, and for Ukrainian banks? According to the official version, the reason is that salaries have sharply decreased in both Russia and Europe. That’s all. The crisis in other countries. How is it in Ukrainian.

Only now, as it seems to me, not everything is so simple. A good specialist in any crisis earns well. But a crappy state, even in good times, steals from its citizens. Transfers are in dollars, and give them in UAH. Yes, undervalued. This is much more serious than reducing wages. This is the reason to look for ways to get money bypassing banks.

Another reason to pay attention: ATO. It is ATO. More precisely, these waves of mobilization that roll with ocean constancy. Nobody wants to admit that the man ran away to Russia. Not patriotic and even dangerous. Dogs can burn a hut.

The Ukrainian parliamentarians could not transfer such feelings. And the government crushes. It is necessary to squeeze out money from stingy Ukrainians. Like lemon juice for a democratic cocktail. Therefore, a new draft law has appeared.

People’s Deputies on Thursday, October 8, adopted the government draft law “On Labor Migration” (No. 2330a) as a basis.

According to the explanatory note, the bill is aimed at establishing legal norms and organizational bases for the movement, employment and social protection of citizens of Ukraine who work abroad and their family members.

Simply put, the Ukrainian Parliament simply can no longer look indifferently at how they mock Ukrainians abroad. They make you work for pennies or cents. They offer low paid jobs. Do not pay sick leave and everything else.

A labor migrant is a citizen of Ukraine who performed or is performing paid work in the receiving state in accordance with the legislation of that state. Everything. Immediately stupor! If a person works abroad and fulfills all the laws of the state where he works, then where is Ukraine?

Then just quote a part of the message. With the following comment.

"It is proposed to legislate that the rights of migrant workers to proper working conditions, remuneration, rest and social protection are governed by the laws of the host country and international treaties of Ukraine, the consent to be bound by the Verkhovna Rada of Ukraine.

Also, according to the draft law, migrant workers pay taxes and fees in accordance with the tax legislation of Ukraine.

So here it is, buried dogs cemetery. If now the Ukrainian is practically inaccessible for fiscal and other bodies of Ukraine, then with the adoption of this law, any labor activity will be possible only with the permission of the Ukrainian authorities and only subject to the conclusion of international contracts.

Tell me, are you, as the owner of the cottage, which needs repair, ready to conclude international agreements? For example, I do not like such a heart. What for? Well, not Ukrainian, so Moldovan or Armenian. At the worst, Tajik or Uzbek. After all, I am doing repairs, not solving political issues on my own plot.

"The employment contract is in the state language in Ukraine and in one or more languages ​​used in the host country, and contains obligations that the foreign employer undertakes, in particular, regarding: working conditions (including relatively safe and harmless working conditions) his payment (including the amount of guaranteed wages); deductions from wages, working hours and rest time, the duration of the employment contract and the conditions for its termination, the provision of social and medical assistance, the implementation of social insurance, compensation for harm caused to the health of the first in the case of an industrial accident or temporary disability, repatriation of migrant workers ", - stated in the bill.

And what conclusion can be drawn from this bill? Simple and straightforward. Ukraine is doing everything to stop the flow of labor migrants from its territory on the one hand. And at the same time, it generally brings labor migration to the shadows. There are only a few truly competent and necessary specialists in this country. The bulk of migrant workers are hard workers. And no one will bother with all the papers and all sorts of contracts for the sake of the ordinary worker. I'm not the only one so lazy.

This kind of concern for ordinary people today is typical for Ukraine. Straight tree sticks. More precisely, a Christmas tree on a stick.

Ctrl Enter
Noticed oshЫbku Highlight text and press. Ctrl + Enter
We are
"Trouble" of the Promised Land. African immigration to IsraelUkrainian migrants in Russia. Since 1, the illegal immigrants will be deported
Military Reviewin Yandex News
Military Reviewin Google News
90 comments
Information
Dear reader, to leave comments on the publication, you must sign in.