I want to list! How Ukraine awards real journalists

October 12 2015
17
Somehow it has become customary in the evenings to receive the next Ukrainian "wisdom." Talented people gathered in the fat Ukrainian information spaces. And most importantly, with the prospect. You will dance, no, write as it should, and repeat the fate of Tuki. You will become the head of the administration of some district or, what the hell, in the sense of Poroshenko, is not joking, the whole region. 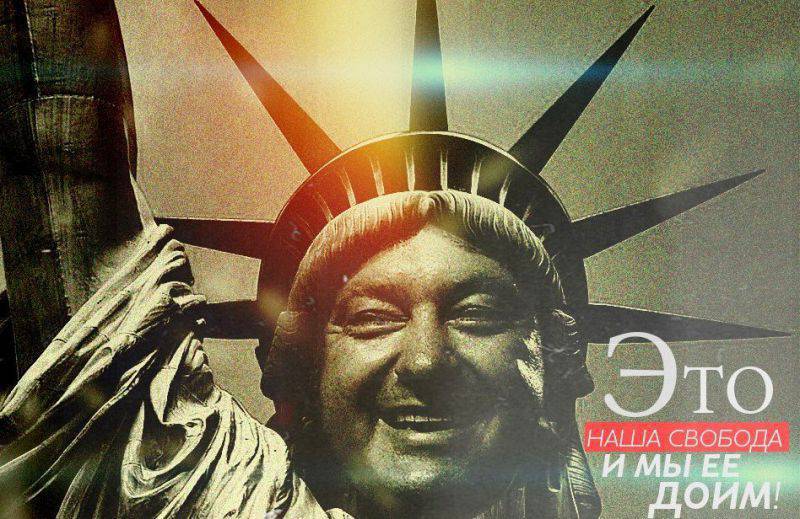 Today I received another smart document. More precisely, the message Ukrinform. And the message, I must say, directly concerns, including me. My ghostly perspective also appears. And, to be honest, very welcome. She is not material. It is rather moral.

Remember September 16? Do not remember? And in vain. For some of the Russian journalists, this day became triumphant, and to someone he spoiled the mood. September 16 President of Ukraine Petro Poroshenko, by his decree, enacted the decision of the National Security and Defense Council on September 2 on the application of sanctions against individuals and legal entities responsible for carrying out criminal activities against Ukraine. The sanctions list included 44 journalist and blogger, as well as journalists, editors and moderators. Along with Russian propaganda journalists, as well as pro-separatist media, the list included three journalists from the British BBC corporation, three Spanish journalists and a journalist from the German newspaper Die Zeit.

The list of Poroshenko made the world’s journalistic community laugh so much that even local svidomye sharks of the pen and keyboard had to react. Ukrainian authorities blacklisted journalists Eduard Eldarov, Vladimir Buchelnikov, Eric Rugalsky and Nikolai Kabanov. According to available information, there is only one real person in this list - the former deputy of the Seimas Kabanov, the other three are pseudonyms, under which other journalists of the newspaper Vesti Today and the portal Vesti.lv work.

Getting out of the puddle and squeezing a little wet trousers a little, the Ukrainian government briskly began to fall asleep this puddle. Or, to put it more simply, correct the lists. Check, so to speak, the name and face of the person. And so quietly the topic was hushed up.

Just could not hush to the fullest. Too many offended. Me, for example. Okay there, not to be in company with Aeroflot. Or some airline "Siberia". Not really wanted. But next to the masters show off ... Dream. Yes, and what are the names! From Mikhalkov to Shoigu and Kadyrov ... But I am not. Yes, and with our portal anyone. Or the names are not the same, or simply forgotten. Here criminal cases did not forget to start. And the list is forgotten. And there are a lot of people like me. Half of those who write about the country are 404.

But the whole Ukrainian ministry monitors compliance and non-violation. Called MIP. Ministry of Information Policy. Poor work, Panov. Very bad. Do not watch, do not see. Do not fence. Give the separatists roam the expanses of the Ukrainian heads and the remnants of the brain.

I heard this same MIP criticism. More precisely, I heard. In the person of Deputy Minister Mipovskogo Tatiana Popova. She threw her breasts at the Russian bayonets. In a sense, on feathers and keys. “The list that caused such a resonance was not made by us and approved not by us,” the official said.

It seems like I'm not me, and the horse is not mine. Someone there for the whole ministry did the work (and why the ministry then?) And set up the respected people with its incompetence.

But now everything. There will be no "someone". Ukraine should know those who ridicule the Ukrainian government. In particular, in the person of MIP and President Poroshenko. Quote:

Whoever does not understand, the list will be written in a new way. Taking into account those who wish, who strongly annoyed Ukraine and especially MIP. So we have hope. And the lucky ones from the outdated list of anxiety, that now they will be forgotten.

But even in an ironic article sometimes it is impossible to get past serious things, from the point of view of any journalist, things. For example, about freedom of speech, freedom of the press. About the lists themselves as such. Once, my grandfather, a front-line soldier, spoke in such cases - you can't shut up the truth! And he was right. As her darling do not push the frame, climbs out. The position of Tatyana Popova herself is interesting.

“We are definitely not heading for the Middle East. We want to go to Europe. The OSCE’s position on this issue is very principled, because there’s no journalists who don’t like the work of the authorities.”

Like this. In a free and democratic Europe there are no free journalists and there cannot be. There is a friendly pack of borzopistsev who, at the command of the owner, hammered into the heads of ordinary inhabitants the information needed by the government. That's where so active, to break the pants and underwear, Ukraine marches. Who should be considered consumers of the information product to say so? Statement by a journalist from a psychiatric hospital.

I understand that the Ukrainian government, and perhaps society, needs an ideology. Maidan is already forgotten, like a dream. But can the country of slaves, who do not live as they want, but how they are told, can at least achieve some success? Is it not clear that the master always lives richer and more comfortable than the serf? Are Ukrainians zombified to such an extent that they are ready to be fed up with lackeys? And where will such a country go?

We are in Yandex Zen
Auto racing for real men
Results of the week. “I will tell you one clever thing! Only you do not be offended! "
17 comments
Information
Dear reader, to leave comments on the publication, you must to register.