Russian aircraft continued to strike at the IG facilities in Syria. The day made 64 departure

October 11 2015
63
Aircraft VKS RF in Syria for the day made the 64 departure, reported Ministry of Defence on Saturday. The increased intensity of departures is associated with a significant increase in the number of targets identified by reconnaissance assets. 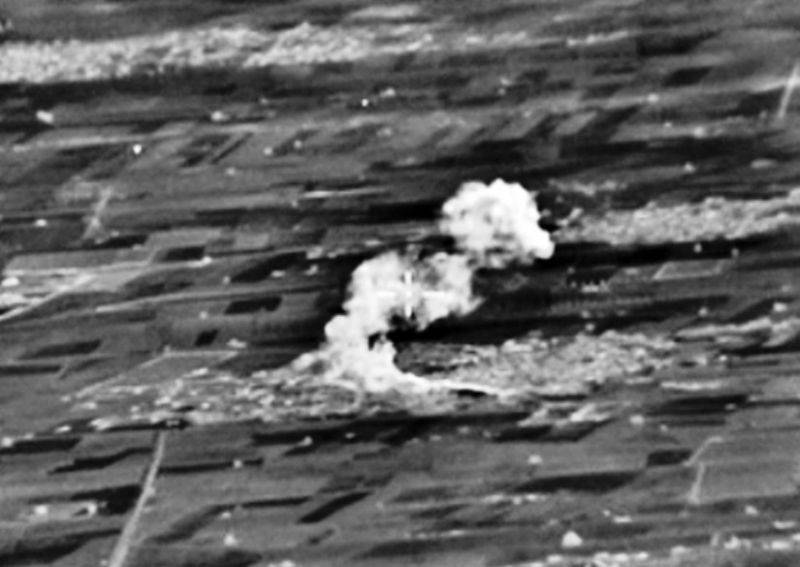 It is noted that the air strikes of the first days led to "a significant reduction in the combat potential of gangs, a decrease in their mobility and ability to conduct offensive operations."

“According to radio interceptions, militants are experiencing an acute shortage of weapons, ammunition and fuel and lubricants. Some of the militants are demoralized and are actively leaving the combat areas, moving in the east and north-east directions through the territory of the Syrian Arab Republic, ”the release says.

"Therefore, at present almost throughout the Syrian Arab Republic, we are registering an active redeployment of weapons, military equipment and vehicles with ammunition, aimed at urgently restoring the combat capability of the existing gangs of the ISIL terrorist group."

According to the report, “the main targets of destruction for the past day were command centers and communication centers of militants, warehouses of armaments, ammunition, bases and training camps for terrorists in the provinces of RAKKA, HAMA, DAMASK and ALEPPO.

Air Group carried out the following work:
“Bombers Su-24m hit a major fortified militants east of the settlement. TEL ALAM, ALEPPO province. At this object were in advance equipped firing points, positions of mortar artillery, as well as in-depth depots of ammunition and food.

As a result of a direct hit by the BETAB-500 aerial bomb, there was an explosion of ammunition, and all the engineering structures of the terrorists were destroyed.

In the area of ​​the settlement KVAISER, ALEPPO province, a Su-24m plane struck a militant military hardware base. As a result of a direct hit, destroyed more than 10 pieces of equipment, including 2 tank and 5 infantry fighting vehicles. A fire started, the shelters in which the equipment was located were completely destroyed. ”

“Our intelligence through several channels uncovered a masked band control unit in the mountainous-wooded area of ​​IDLIB province. After analyzing satellite images of the area and conducting aerial reconnaissance by unmanned aerial vehicles, a spot was plotted on the object aviation strike, ”added the press service.

In just a day was destroyed:
“2 militant command posts; ammunition depot in the province of Hama; 29 terrorists field camps; 23 fortified points and defensive positions with weapons and military equipment. "

At the same time, the Russian Ministry of Defense continues to expand international contacts. A draft interdepartmental agreement “on measures to prevent possible incidents in Syria’s airspace between military aircraft of Russia and the coalition led by the United States” has been prepared. The Russian command is ready to discuss this document with the Pentagon and is awaiting its reaction in the near future.


“The result of a Su-34 bombing of an airstrike on the command post of ISIS militants in the province of Rakka. The camera of an unmanned aerial vehicle recorded the exact hit of high-explosive aerial bombs at the target. The object is completely destroyed, there is a large-scale ignition center. ”


“The result of a strike on the fortified positions of an illegal armed group of ISIS in the province of Aleppo. A direct hit by a bomb on the fortifications of terrorists led to the detonation of the ammunition there and the complete destruction of the militants' stronghold. ”


“The consequences of an air strike on the accumulation of military equipment. This led to its ignition and detonation of ammunition. ”


"The result of a strike on engineering structures with a concrete-bomb BETAB-500. The object was completely destroyed by an exact hit."

We are in Yandex Zen
ARMY-2016. Cluster VCS. Part of 2. Space is space!
Part of gangs in Syria is leaving its positions, the government army launched an offensive
63 comments
Information
Dear reader, to leave comments on the publication, you must to register.