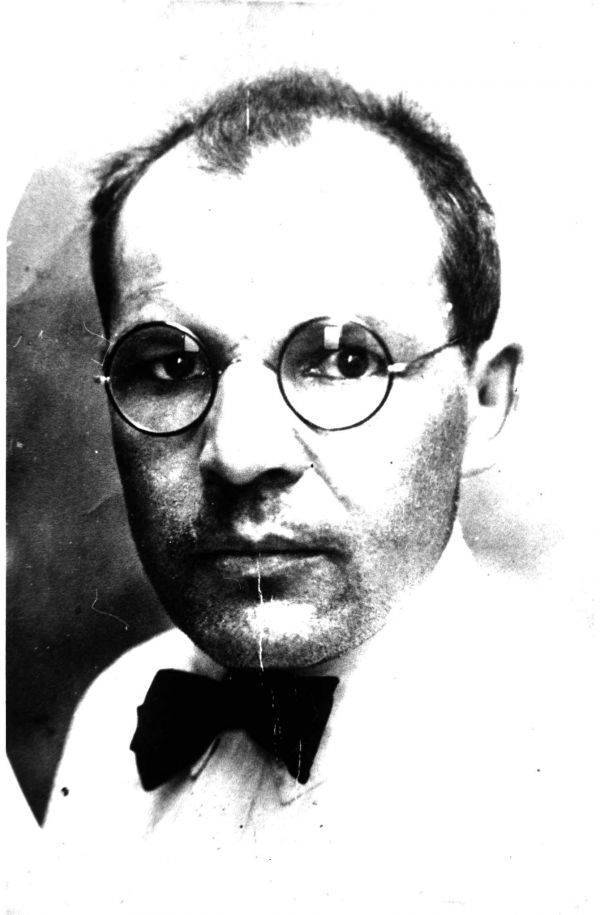 6 August 1924 Khakimov, together with the staff of the consulate general, who also served as a diplomatic agency, arrived in Jeddah. As the Soviet representative was a Muslim, 9 August 1924 was allowed to hand his credentials to King Hijaz Hussein bin Ali al-Hashimi in Mecca, the holy city of all Muslims. This irritated Britain, [4], since the opening of the USSR Mission in Jeddah - the first diplomatic representation of the Soviet Union in the Arab countries - became a major foreign policy success of the USSR, [5] especially as King Hussein again refused to sign the Anglo-Hejaz treaty .

Of great importance for the coverage of Soviet intelligence activities in the countries of the Middle East in 1920-1930-s are the essays "The work of the Comintern and the GPU in Turkey" by the former deputy trade representative in Turkey I.M. Ibragimova [6] (written in Paris in 1931, remained unpublished), in which he explains the reasons for the successful work of Khakimov in the following way: “Khakimov got at his disposal the best workers from ... young people with knowledge of Arabic (various dialects). The position and work of Khakimov is still made easier by the fact that he is a Muslim. He even ... by order from Moscow, performs all the Mohammedan rites in order to gain the trust of [the Arabs], which he achieved quite. The only one even of diplomatic agents (it seems that Holland still has its diplomatic agent in Gejas [7] from Muslims) Khakimov has the right to free movement around the country. He enjoys the full confidence of King Gejas and more recently the ruler of Yemen, Imam Yahya [8]. Now (in 1931 - PG), he is part-time and representative in Yemen. [9] ”[10].

M.M. arrived in Jeddah as secretary to Khakimov. Axelrod [11]. Here he worked until 1927, completing the INO [1925] assignment with 12. Perhaps Axelrod’s transition from NKID to foreign intelligence in 1928 was the reason he began publishing his orientalist articles under the pseudonym “Rafik Musa” [13]. 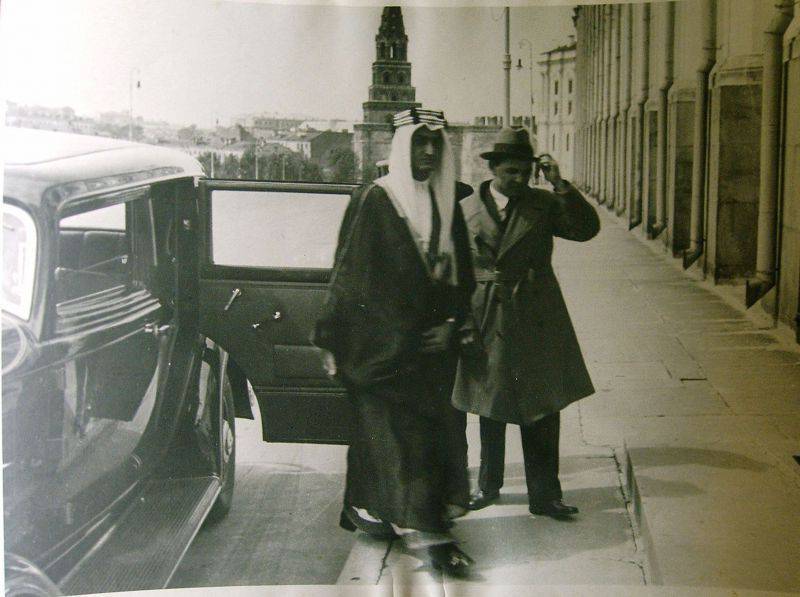 Agabekov confirms that “in Gedjas and Yemen, the GPU did not conduct any work until the arrival of the Soviet ambassador Khakimov there. In the 1925 year, being associated with [O] GPU for work in Mashhad, Khakimov began to conduct information work in Gejas. Simultaneously with him, Secretary of the Khakimov Moses Axelrod and the representative of the People's Commissariat Belkin [14] arrived in Gedzhas. Axelrod and Belkin voluntarily, at their peril and fear, began first in Gejas, and then in Yemen undercover work. Seeing their zeal, the GPU appointed Axelrod, who soon moved from Gejas to Yemen, as his special representative. Axelrod ..., who knew Arabic well, was able to contact prominent officers of Imam Yahya, but due to the lack of intelligence experience, he could not sufficiently use these connections. From Yemen, Axelrod did work in Eritrea [15] and sometimes even sent his agents to Egypt ”[16]. 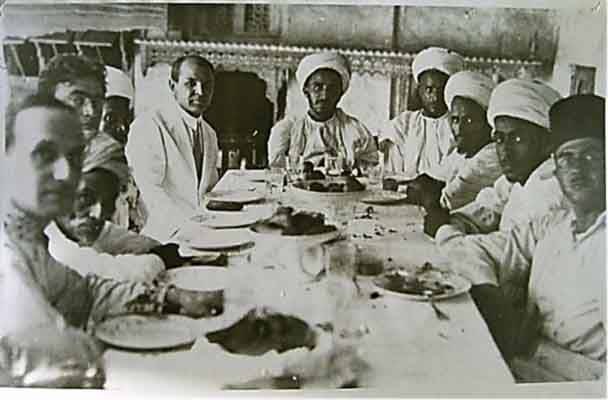 K.A. Khakimov (at the far left corner of the table) with employees of the Soviet trade mission and Yemenis (presumably in Sana'a)

The extent to which Axelrod’s activities in Egypt were active was indirectly indicated by an episode that took place along the way he was going to Yemen in 1928, whose description was preserved thanks to the GA Report. Astakhova [17]: “In Port Said, the increased vigilance of the p [aro] / marching police against us, especially regarding Comrade Axelrod, was striking. Our passports were taken ashore (obviously, for a photo) ... One of the police officers, with an exaggerated confidentiality, informed T. Axelrod that we are in Egypt blacklisted [18].

And yet, for Soviet intelligence in Egypt, Axelrod performed an auxiliary function. “[O] the GPU and the Comintern in Egypt work through a certain Semenyuk. Semenyuk speaks English and Arabic. Semi-intelligent. He lived before the war in America, now an American citizen. His residence is in Alexandria. He worked there as a private merchant, being the official representative of the joint stock company “Russo-Turk” [19]. With every Soviet steamer, he sends extensive informational reports on all lines (and sends copies of economic reports to the Trade Representative). All secret and overt agents traveling to Egypt are placed at his disposal. Sometimes it is possible to send to Egypt and other Arabian [20] countries directly Soviet citizens from communist youth / graduates or students of the Institute of Oriental Languages ​​[21] / under the guise of [students] to practice the language of the country. Visas in these cases are obtained at the request of the relevant scientific institution ”[22].

As a result, the states that did not border on the USSR were intelligence-divided “between two agencies: 1) Arabian Peninsula, South Persia, India — under the leadership of Khakimov; 2) African countries - under the leadership of the Turkish resident through Semenyuk. In addition, Semenyuk still has a connection with Khakimov ”[23].

In 1935, Khakimov was again sent abroad: he was appointed as the plenipotentiary of the USSR in Saudi Arabia. However, with the arrival of Khakimov in Jeddah [24], the prospect of revitalizing Soviet-Saudi relations was soon wiped out due to the notorious political processes that unfolded in the Soviet Union. 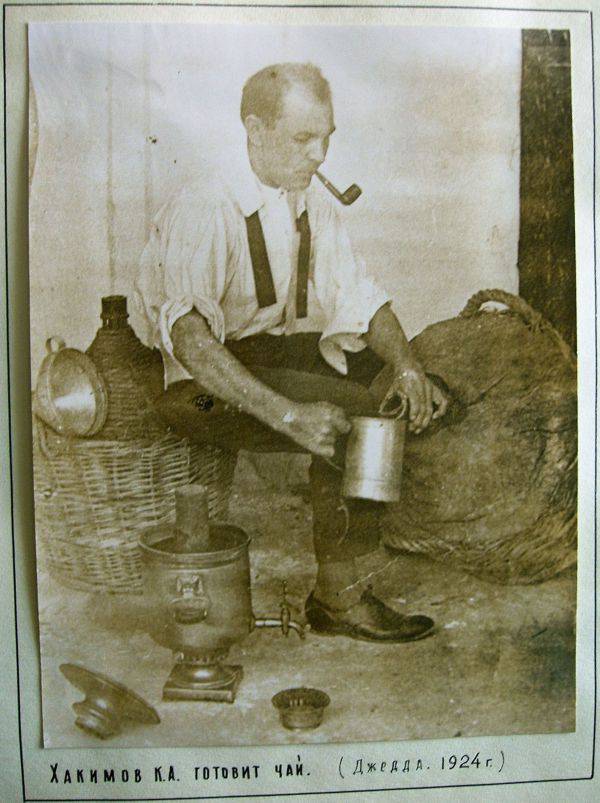 We are in Yandex Zen
The establishment of Soviet-Saudi diplomatic relations
Defenders of the frontiers of the empire. From the history of the Separate Border Guard Corps
3 comments
Information
Dear reader, to leave comments on the publication, you must to register.