Staffordshire treasure and its riddles

November 4 2015
39
What to say - lucky the British in terms of archeology, and how! Here you have both Stonehenge, menhirs, ancient burial mounds, and one finds more valuable than the other. Among them are the unique helmets of worldly horsemen and barbarian kings, Damascus steel swords and silver brooches of Roman legionnaires, and there’s nothing to say about the Thames, perhaps half of the most valuable swords of the Royal Arsenal were extracted from the bottom of this river! Among the finds there, gold and silver are enough, even if it is found there and not by tons or tens of kilograms, as in ancient Egypt. The British themselves, especially landowners, have long acquired detailed maps of their land plots and regularly comb them to find ancient artifacts and, I must say, very many of them are lucky! 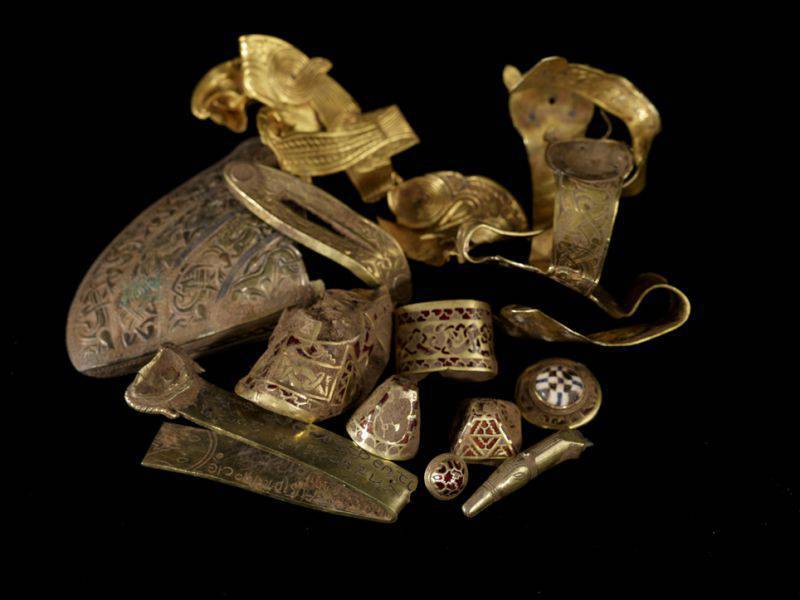 One of the most remarkable treasures of recent times was found in Staffordshire, and immediately received the name "Staffordshire Treasure". This is one of the largest and most interesting archaeological finds in stories humanity and at the same time the largest find in the UK in terms of the amount of gold. First, the hoard contained 1500 of thousands of small parts and large items of precious metals, and then archaeologists found the second part of the hoard, at the moment the total number of finds is 3000. All this is done in the most complex technique of filigree. Scientists have counted in it more than 300 overlays on the hilt of swords, 92 tops of the hilt and 10 sheath hangers. Among all this, not a single item was found that belonged to a woman. Only three items of the finder had nothing to do with military affairs. And, again, it is surprising (although not so surprising, if you think about it!) That only the gold details of the swords were buried in the ground, and the swords themselves ... somewhere ... were “used”. The fact that the top of 92 suggests that it is the property of a whole squad, because the sword at that time was worth a fortune, especially decorated with gold. The fact that the sheath was also trimmed with gold overlays indicates that all these 92 knights were not simple people and, nevertheless, lost their swords!

Terry Herbert found this treasure - a farmer who loved to “walk” with a metal detector, and for some reason spent his search on the field with another farmer, his neighbor Fred Jones. That's how he became a happy treasure hunter and honestly got his 50% earned from the value of the find. Now it was necessary to find out how much all these treasures are worth. An independent commission appointed by the Minister of Culture was to evaluate all these items of this warehouse, which many museums wanted to acquire. After the completion of the expert assessment, the commission determined its value in 3 million 285 thousand pounds sterling. Each of the farmers received 1 million 6425 thousand pounds, not taxable, which caused in the country an unprecedented boom and demand for metal detectors of very different power. 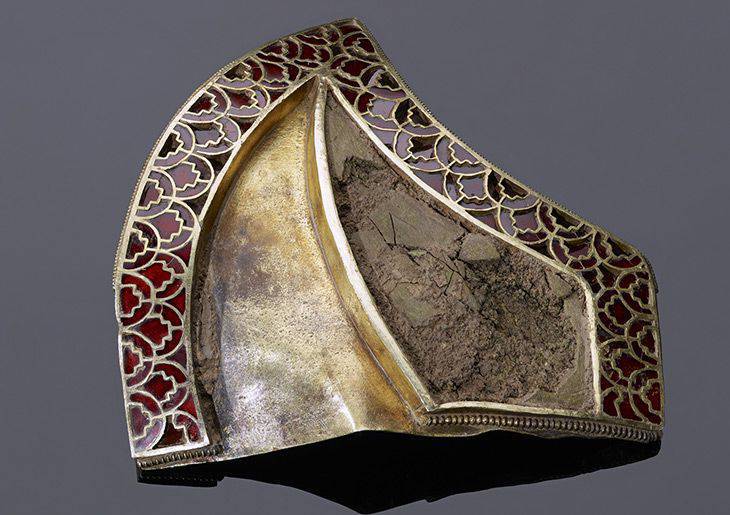 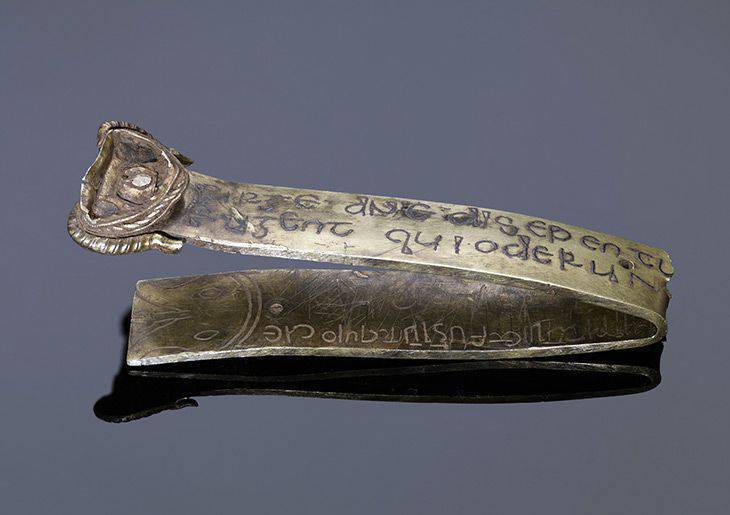 The Staffordshire treasure was most like a sacrifice. According to legend, the ancient Germans hid such things in the ground in order to open the way to the world of the dead, in order to atone for their sins in this way. In this case, it must be said that the owner of this treasure sinned a lot and, moreover, was an obvious pagan.

Scientists relate the Staffordshire treasure to the famous masterpieces of British art. According to experts, these hats, dishes and jewelry should belong to the Anglo-Saxon elite. Well, most items are dated 7 century.

The total amount of gold was 5 kilograms, and silver 2,5 kilograms. Also next to this treasure were the bones of a young warrior, they lay there for 13 centuries. The warrior had a broken jaw, a cervical vertebra, he was also hit on the head, and the total number of blows in total was 33. That is, they beat him for a long time and with taste! And it is very unfortunate that we will never know what relation he had to this treasure. Well, these treasures themselves were bought by the art museum of Birmingham, as well as the museum of pottery art and an art gallery. 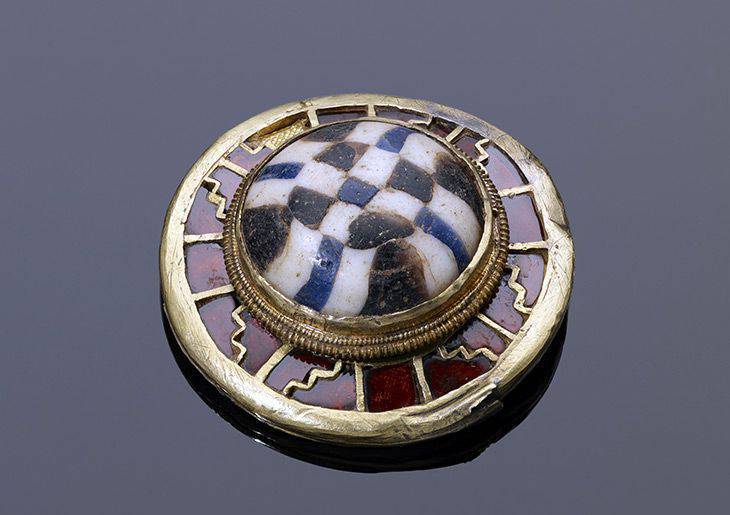 Scientists believe that gold in these places came from Byzantium. As a result of research findings from pomegranate, scientists found that the products were made tools that 1300 years. Also, these tools were found in 150 kilometers from the treasure. Where Terry found the treasure, scientists continued to search for something that would somehow help them understand why the treasure was buried here. During geophysical analysis, they found a curved line in the same place where the treasure was discovered. But, alas, they found nothing there. The conclusions from the study of the treasure have been made a lot, but so far (if not forever!) They are very superficial. 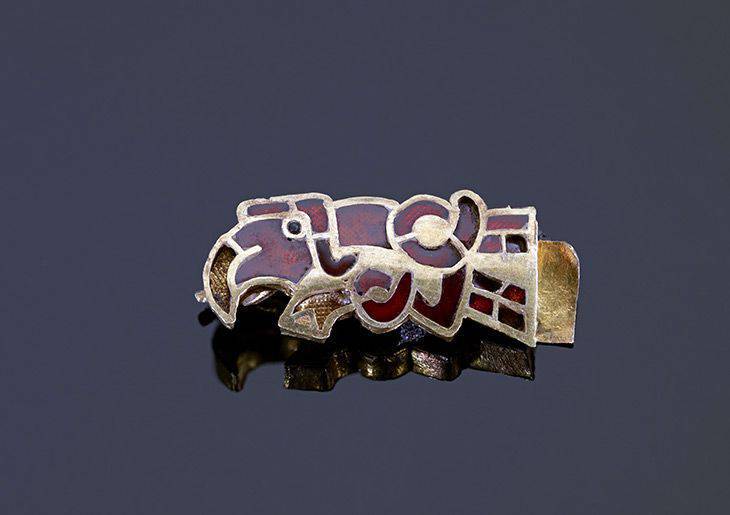 For example, it is obvious that the pendant in the shape of a skate was made by a very skilled craftsman, since its size did not exceed four centimeters. There were also two crosses and a plate of gold with two eagles, which were separated by fish, and on which was a quote from the Bible.

Christianity in Britain came along with the Roman conquerors. But as soon as their power began to fade, Christianity also began to give up. But in the era of the Anglo-Saxons, it was revived thanks to the missionaries, many of whom came from Ireland or from Europe. The specialist in popular religion of the Anglo-Saxons K. Jolly writes: "Conversion was perceived as a spiritual battle." Where war is, there is also a battle for souls. Crosses in it were of great importance and acted as important combat symbols, including in battles, where they overshadowed the fighting soldiers. Of the two crosses found in the treasure, one is of particularly great interest: it was quite intentionally bent and folded, like many other Staffordshire subjects. Perhaps, it was done on purpose, in order to “kill” the fighting power of this cross, which was sent to him from heaven? 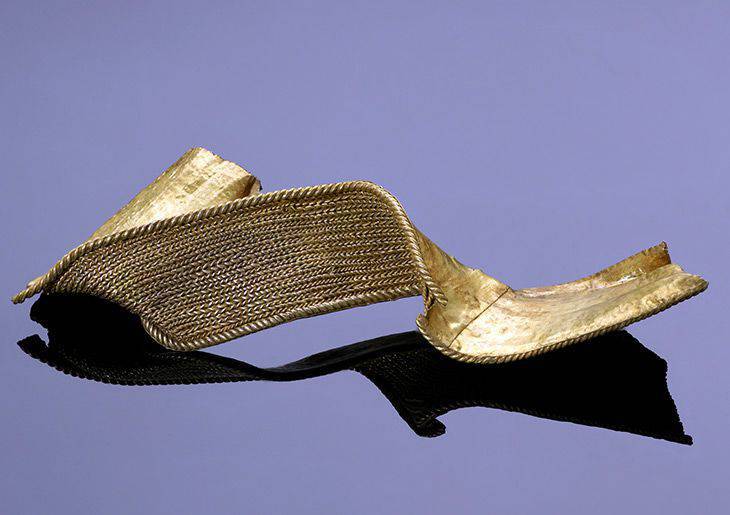 This version seems to be even more convincing if we consider the gold plate, which has just appeared here, also folded in half. On both sides of the plate was the same verse from the Bible. It was obviously taken from the so-called Vulgate, the Bible translated into Latin, and it may be that it was a kind of a talisman, a defensive spell. Apparently, even those items from this treasure that seem not directly related to arms, could be assistants on the battlefield, as they had magical properties in the eyes of those people. 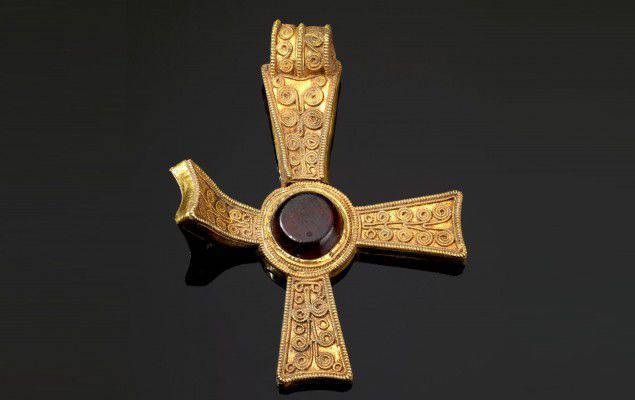 Someone hid so much treasure, and for what reasons. The place for the treasure could not have been chosen by chance, perhaps it was then quite deaf - or, on the contrary, well visible. Maybe he was somehow even flagged to be found later — or, on the contrary, they brought treasure to the gods, and hurried to sweep away all possible traces to him. Well, they could have buried anything: a ransom, a war trophy, or even an offering to the gods. Perhaps in a later era, someone hid the Anglo-Saxon family heirlooms in this cache.

We know that once on the spot where Lichfield stood, a bloody battle took place and it may very well be that they were her trophies that were buried in the ground ... with different goals that we can imagine. However, the most important thing in this case is that they were buried at all, and then found, and today we can admire these products of the ancient masters.

Ctrl Enter
Noticed oshЫbku Highlight text and press. Ctrl + Enter
We are
Riddles of the Great Mound (Part of 2)Weapons and armor of soldiers of the Trojan War. Swords and daggers (part one)
Military Reviewin Yandex News
Military Reviewin Google News
39 comments
Information
Dear reader, to leave comments on the publication, you must to register.