The dark side of the janissary

October 12 2015
80
Last week, official Ankara in the person of Turkish President Erdogan announced that "Russia's actions may lead to a revision of trade and economic relations." Erdogan, declaring two entry into the Turkish airspace of Russian aircraft, spoke about the "response measures". Despite the fact that the Russian side apologized for the violation of air borders, the Turkish president decided to follow the path of tightening the rhetoric and said that we can (the Turkish authorities) completely refuse to implement the plans to build the Turkish Stream, as well as the construction of the Akkuyu NPP under the Rosatom project, which is to be launched in 2020. 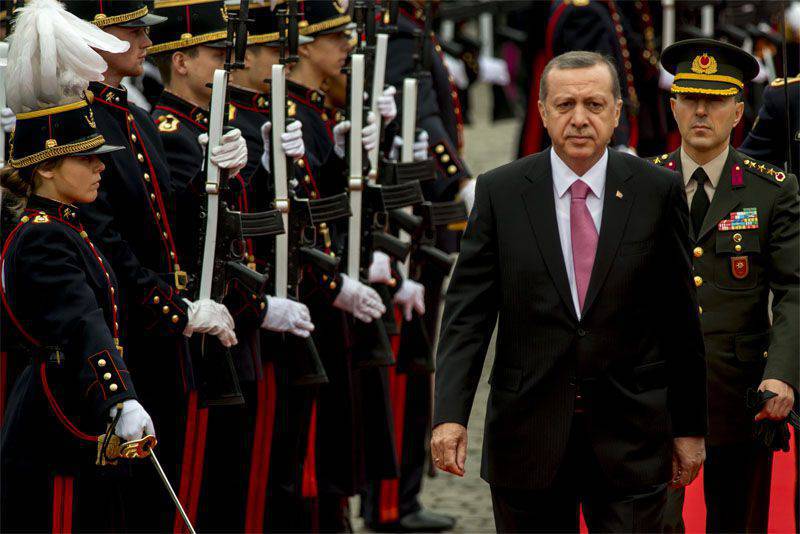 At the same time, Turkish Prime Minister Ahmet Davutoglu, initially speaking out in favor of the need to maintain partnerships with Russia and announcing that the incident with the Russian airborne border crossing the country’s exhausted, apparently received a scolding from the “boss” for his rhetoric, and also spoke in terms of Erdogan. Davutoglu during a conversation with reporters in Istanbul said that, according to Turkish sources, only two out of dozens of blows aviation The Russian Federation in Syria fell on terrorists. The rest, the head of the Turkish cabinet assures, were aimed at the "moderate Syrian opposition," at the "rebels."

Ahmet Davutoglu quotes RIA News:
Of the 57 air strikes of the Russian Federation in Syria (at the time of the Turkish prime minister’s speech), only two were directed against the IG. The rest are against the Syrian opposition. The information that is transmitted to us is different from what is actually happening, and we stated this to the Russian Foreign Ministry. We will support all who struggle with the IG. But attacks on the moderate Syrian opposition strengthen the IS.

Perhaps in this case there is no special need for the hundredth time to try to remind our "partners" that the "moderate Syrian opposition" is what feeds on foreign "benefits", forming the so-called "Syrian free army" from the most "moderate" and then, under the guise of combating terrorism (and more often and completely openly), uses force to carry out a state coup in the country. Against this background, especially outstanding successes of the “moderates” can be considered the fact that among them are already fighting 4-5 people who were trained by Western military instructors in Turkey and so far (oh, how lucky!) Have not gone along with weapons on the side of "Dzhebhat an-Nusra" or ISIS - two "manoenko not moderate opposition organizations."

So, Turkey is actually threatening Russia with breaking previously signed contracts, arguing that this is border violations, and not with blows to those that are not there ... And it’s understandable. Our great friend Recep Tayip just wants to seem like a real lion to his NATO partners, but in fact it turns out to be an incident - the fighters of the Russian Aerospace Forces freely walk in the airspace of the NATO countries - somehow even before the Balts and personally Mademoiselle Grybauskaite is ashamed ...

From Erdogan's statement:
An attack on Turkey at the same time means an attack on NATO. The situation is clear to us. Violation of Turkish airspace is also a violation of NATO airspace. I say that all the statements and explanations of Russia on this issue can hardly be called convincing.

In general, when Recep Tayyip was tearing out the Turkish “moderate” opposition with tear gas before the elections, it was the partners of the most peace-loving on the planet alliance jarred, but, as they say, inspired at the same time too. And here the janissary turned out to be negligee ... That is why he tries to defend the janissary’s honor. Well, okay ... here is another ...

Paying once again attention to the statement of Davutoglu that Ankara, it turns out, supports everyone who is fighting with IG, certain questions arise. It is strange that the journalists with whom Davutoglu talked in Istanbul did not ask such questions to the Turkish prime minister. Or were there only Turkish correct representatives of the press? ..

And the main question is, how is it, Mr. Davutoglu, that you support “everyone who is fighting IG”, but at the same time you manage to shower some of them with aerial bombs? This, of course, is about the Kurdish formations, which until recently remained one of two (besides the Syrian government forces) forces fighting against the terrorists of the same Islamic State. If the bombs fall on the heads of those who are fighting ISIS, does this mean that ISIS is closer and dearer to official Ankara than many thought? .. And this is not all the questions to the Turkish leadership, which is so concerned with the actions of Russia, that psychological overvoltage decided to put pressure on the gas (the one that is preparing to flow through the pipe) and the peaceful atom.

Dear Turkish authorities, Russia undoubtedly also appreciates the high turnover, all the bilateral agreements concluded, part of the population appreciates Turkish hotels and beaches, but still I would like to draw your attention to one “small” detail. Blaming Russia for violating Turkish airspace, forgive me, jester, you yourself climb into someone else's sky, moreover, without sanctions from the UN Security Council and requests from the legitimate authorities of the states whose airspace your bombers plow? And if Russia is not too lazy to apologize and explain, then neither Iraq nor Syria have heard any apologies from Turkey ... And it is unlikely that they will hear in the near future.

There is another question for the Turkish authorities: if official Ankara is so concerned about the spread of international terrorism and the fight against the so-called “Islamic state”, then what about the Syrian intelligence? The point is that the militants of ISIL and al-Nusra control several sections on the border with Turkey at once, and not only control, but at the onset of the Syrian government troops without much difficulty, the Turkish border is crossed, holed up, re-equipped, regrouped, and then with New forces strike at the Syrian army. A few days ago, a video was released on one of the federal channels, on which you could see how pickups of militants drove out of Syria and ended up in Turkey. And after all, official Ankara in the person of our partner Recep Tayyip says nothing about the fact that it is, they say, a violation of the borders of Turkey and at the same time a violation of the borders of NATO, that neither Turkey nor NATO will leave it like that, but will take and break the “contracts” ... ? Well, the very ones, according to which the militants (oh, excuse me, the “Syrian moderate opposition”) are preparing, including on Turkish territory (according to the statements of Pentagon’s official representative Mr. Cook), and according to which “someone” is quiet quietly, in return, takes the oil pumped for a pittance on the oil towers taken by the "moderate" terrorists.

As soon as our Turkish friends give intelligible answers to these questions and unequivocally explain that all suspicions about Ankara are not worth a jigger, Turkey will be able to afford a critical tonality to others. In the meantime, official Ankara will continue to divide the terrorists into "good" and "bad", "moderate" and "unlimited", unfortunately, the country will be forced to face the bloody attacks of both. The terrorist attacks in the Turkish capital prove it. 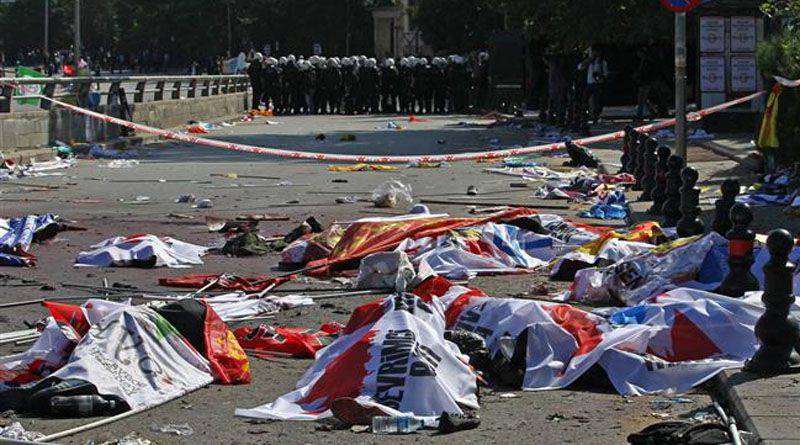 I would like to express my condolences to the families and friends of those killed in the terrorist attacks in Ankara by extremists.

We are in Yandex Zen
"Sultan" apologizes or not? Prospects for the normalization of Russian-Turkish economic relations
Results of the week "I do not need a Turkish coast"
80 comments
Information
Dear reader, to leave comments on the publication, you must to register.