"Reflections on the impossible"

October 11 2015
22
Sometime in the distant 60s of the last century, a frank and courageous book by the famous American scientist Hermann Kahn “Reflections on the Impossible” was published, adding to the sensational cycle of publications “On Nuclear War” and “2000 Year”, which were inaccessible to wide sections of Soviet readers (even the release in 1966 of the book “On Escalation” in Voenizdat ”with a minimum circulation was accompanied by a“ no sale ”note, and this edition itself was not honored to be included in the consolidated catalog of the Lenin Library in Moscow in order not to awaken societies nny interest).


After half a century, the works of this legendary American futurologist and military strategist seem not only not outdated, but surprisingly topical and modern due to the difficult Russian-American relations. Even if a nuclear war is impossible due to destructiveness and serious consequences, Kahn was not afraid to reflect on this topic, calmly and cynically counting the losses under various scenarios of hostilities.

He frankly wrote: “Most of us simply do not believe in war, at least in a deliberately initiated nuclear war, and many people do not bother with worries about accidents and miscalculations - but absolute confidence in restraint is an example of lightheadedness and carelessness.”

Thus, the discussion about the reality of nuclear war ceased to be the prerogative of a narrow circle of experts — broad sections of American society and, a little later, other countries joined it.

Some then and now the role of Kan's research is seen in taming the public towards the inevitability of war, thereby dulling the feelings of self-preservation and vigilance. However, the role of Hermann Kahn is not so clear and primitive for me. This is a complex personality and our worthy opponent.

STAGES AND STAGES OF MILITARY CONFRONTATION

Expanding the types of intimidation, political, strategic, moral-psychological and mobilization aspects of the war, the civil defense organization Kan singled out the 17 stages in the development of military-political conflicts, proving at what stages tactical and then strategic nuclear forces can be applied first. weapon.

According to the degree of increase in the intensity of the military-political conflict, we are talking, firstly, about “pre-crisis maneuvering”; secondly, the “traditional or standard crisis”; thirdly, “about an acute crisis”; fourthly, “about an unusual”, or rather “non-standard crisis”; Fifth, about the “diplomacy of nuclear pressure”; sixthly, about the “universal war” with strikes only on military targets; Seventh, about an “all-inclusive war” with strikes against civilian targets.

Hermann Kahn put a special meaning into the meaningful content of the notion of “acute crisis” in order to visualize the military-political situation and the state of public opinion, in which the number of people who are convinced that nuclear war is possible increases.

Commenting, we note: determining how many people should come to a similar conclusion, what their social composition and degree of concern should be, so that the crisis is seen as acute, is a complex sociological task.

However, the practical side of the issue, according to Kahn, is easier than the theoretical one. Much here will depend on the specific development of events.

If the majority of people in everyday life perceive the fact of nuclear weapons and the possibility of their use in a very abstract and even calm way, then in the face of aggravated international tensions, indifference disappears.

Specific figures about the stockpiles of nuclear ammunition and delivery vehicles suddenly turn into a real threat. Such a change in attitudes does not occur suddenly and does not simultaneously encompass the entire population, but a significant part of the political class can gradually come to the reality of nuclear war.

Summarizing, we note, firstly, Kahn's pragmatism, and not only militancy; secondly, the desire to rely on a wide range of scientific methods in assessing the state and prospects of the military-political situation in the world; thirdly, proof of the need for broad functions of the Ministry of Defense, including a significant block of mobilization tasks; fourth, increased attention to strategic military theoretical issues - macrosociological and geopolitical.

Imposing the conceptual scheme of H. Kahn on the situation of confrontation between the United States and Russia, we recognize that the main conclusion is confirmed by and large: the duration of the military confrontation, representing not just a one-time event (say, nuclear attack), but a process (process) of gradual in the military-political conflict, the deployment on a long-term basis of hostilities. The facts of the day confirm the procedural characterization of the military-political confrontation, but descriptions in the categories of “classic warfare” are a thing of the past, since not only hostilities, but informational and psychological warfare to “soften” the consciousness of a potential enemy, are of paramount importance.

THE ROLE OF SCIENTIFIC RESEARCH 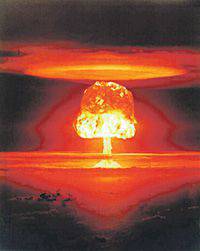 A limited-scale nuclear war to many Western experts does not seem to be the very embodiment of evil. 1954 Photo of the Year
Thanks to Kahn’s publications, two legitimate phenomena are visible. On the one hand, a high degree of activity by the US Department of Defense, which purposefully cooperates on a multifaceted subject matter, not only with government agencies and businesses, but also actively works with the non-profit non-governmental sector, including independent institutions that develop and update military-political concepts and programs as important semantic guidelines for civil society and government bodies.

On the other hand, such an important integral part of the US military power (along with military means) is the fundamental military and political developments based on macrosociological and geopolitical analysis, which is based on the sociology of conflict and the sociology of the state. Everything together expands the ability to solve a wide range of not only military, but conceptual, ideological, organizational and practical tasks, which is important for any sovereign state, including our country.

Hence the need to reread the works of Hermann Kahn:

- in order to better understand the American opponents in Russia, which turn out to be geopolitical opponents and competitors for us;

- to clearly remember the balance of the powers of the great powers as a subject of persistent and scrupulous monitoring by thousands of highly qualified American specialists who carefully compare each important and especially new parameter of the Russian military and intellectual power in the process of content analysis of huge data arrays;

- to identify a specific deficit in domestic science of deep and convincing research and publications on this subject based on macrosociological and geopolitical analysis using the latest scientific methods, including quantitative and qualitative research in the newest paradigm, called overseas AR (action research).

The works of Hermann Kahn are still of genuine interest in various countries, especially when the necessary requirements for the command and control system during the crisis are formulated.

In addition to the standard work of data collection and distribution of information to specific recipients (along with other organizational, technical and accounting work), Kahn emphasized the importance of refined assessment criteria for preliminary decisions, prevention and response within a single concept, direct coordination of actions, and also facilitating the organization of special conferences and consultative meetings.

The studies and published works carried out by Kahn have led to the adoption of tough policy decisions by the President of the United States. This refers to the active and consistent implementation of the command-administrative resource, including surveys of US enterprises by the US Department of Defense with the goal of concluding further contracts for the production of military products of the required quantity and quality and obtaining organizational and personal services by the Pentagon. Incidentally, the quartermaster service of the US Army in 1963, as reported in the closed Soviet sources of the time, agreements were concluded with 5 of thousands of firms and companies.

This is quite important, along with the determination and calculation of the duration of the mobilization period, during which the industry will be switched to military production to provide armed forces with weapons and equipment.

Another major area of ​​activity of the American authorities in those distant 60s is the organization of mobilization planning in order to identify existing production facilities, reduce new construction, evenly distribute the load of enterprises in case of war, and eliminate excessive competition.

These measures were supplemented in the United States by persistent and diverse activities (under the general guidance of the Assistant Secretary of Defense for Logistics and Supply) for standardization of weapons and equipment, for reducing the heterogeneity of small internal combustion engines in the 0,5 – 20 power range of horsepower used for military purposes. As a result, the number of parts required for the assembly and repair of such engines was reduced from 23 thousand to 800 names, which was especially noted in the special information and analytical note “Major measures to improve the mobilization readiness of the economy and rear of the US armed forces” USSR in 1964 year for the leaders of the CPSU and the government.

Under the influence of Kahn’s research and publications on nuclear war, escalation and others, the development of a five-year bomb shelter program, a four-year program to increase civil defense radiation monitoring network (with the creation and equipment of 150 thousand monitoring and measurement posts) was put on the US agenda. the end of 1963 of the year).

In the context of civil defense and increasing the mobilization potential of the United States in the first half of the 60-s, a series of measures to increase labor productivity in government institutions were developed based on the survey results, including the use of timekeeping, improved personnel management, and the effective use of automatic equipment and electronic computing equipment.

Thus, the conclusions and calculations of Herman Kahn led to the strengthening of the mobilization potential of the United States, the experience of which should be seriously studied today in our country.

Kahn combined in himself as an analyst, strategist, geopolitics, sociologist, and even a philosopher. He is a patriot of his country, ready to defend the national interests of the United States in various ways, and this is also instructive.

The significance of the research and publications of Hermann Kahn, perhaps, is that, on the one hand, a system of criteria was developed and tested for assessing the level of military-political confrontation between the two great powers - the USSR and the USA, and on the other hand - in the acute and convincingly raised the question of the price of inevitable losses, even minimal ones: with the development of events favorable for the USA - from 20 to 50 million Americans for destroying a significant part of the USSR, rejecting it from 60 in 40 or even 20 years of the twentieth century.

Canov's estimates and projections in the context of the current price of a possible victory over Russia remain the subject of sharp controversy both in Europe and in the USA itself. The role of publications in this context of Hermann Kahn is great, since it is a question of scientific work with shocking conclusions for practitioners.

The writings of this American expert have to be remembered, since the underestimation of a nuclear and even conventional war is fraught, as has been said, not only with bitter insight, but with terrible retribution for carelessness and frivolity.

We are in Yandex Zen
Dream of the impossible - achieve more
Russia: the Moon, Mars and further everywhere ... Speeches of the participants of the Izborsky club in the corporation "Rosobschemash"
22 comments
Information
Dear reader, to leave comments on the publication, you must to register.