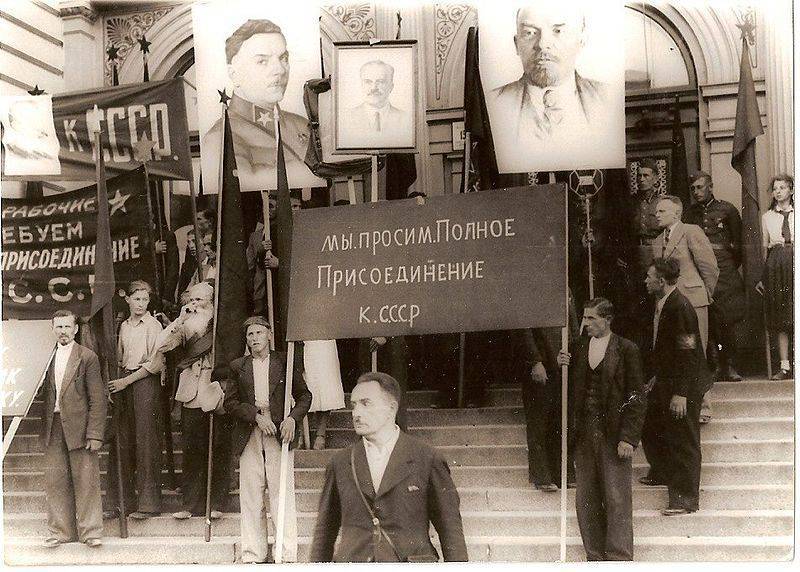 70 years ago 16 August 1945 was signed the Treaty on the Polish-Soviet State Border in Moscow. Representatives of Great Britain and the United States, the military allies of the USSR, participated in the preparation of this treaty. Poland’s new eastern border followed the so-called Curzon Line. Under the agreement, Warsaw has officially officially ceded Moscow a significant territory with the cities of Vilna (Vilnius), Grodno, Brest, Lviv ... In exchange, she received in the west and on the Baltic coast no less extensive lands of defeated Germany. Winston Churchill will say that "instead of Polesye swamps, the Poles received industrial Silesia with its coal and iron ore."

After the collapse of the USSR, the eastern border of Poland will remain the same, but it will become the border with the new independent states: Lithuania, Belarus, Ukraine, as well as the Russian Kaliningrad region.

Lithuanian authorities deliberately ignored the 2009 70 anniversary of the reunification of Vilnius (Vilna) with Lithuania in XNUMX. It was as if there was no long-awaited liberation of this city and the Vilna region for the Lithuanians, albeit by Soviet troops. But this city will become the new capital of Lithuania.

In Lithuania, at the official level, the Kremlin’s transfer in 1946 of the Lithuanian SSR of the former German port city of Memel (now Klaipeda) is also not remembered. This ice-free port of 670 years, from 1252 to 1922 year, was part of the German lands (East Prussia, and then Kaiser Germany). Then was re-joined, but to Nazi Germany. He, like Königsberg, was handed over to the USSR in 1945. And then Moscow "presented" this city and the whole region of the Lithuanian SSR.

Most likely, the anniversary date of the signing of the Moscow Treaty on the Polish-Soviet border will also remain unnoticed in Lithuania. In this country, in Ukraine and in some other post-Soviet states, clear nationalists and open Russophobes are in power today. For them, any Russia: Tsarist, Soviet, and modern is an enemy country!

The treaty was recognized by the great powers. Therefore, it will not become a likely object for slanderous hysteria of foreign Russophobes. Another thing is the same Molotov – Ribbentrop Pact. He appeared, as they say, on the initiative of Hitler and Stalin. A post-war treaty on the border between Poland and the USSR appeared on the initiative not only of Stalin, but also of Roosevelt and Churchill. And this is something else!

By the way, about the Molotov – Ribbentrop Pact. Read Churchill's review of this pact. “In favor of the Soviets, it must be said that it was vitally necessary for the Soviet Union to push back the original positions of the German troops as far west as possible. If their policies were coldly calculating, then they were also ... highly realistic. ” He will also note that it was precisely pre-war British policy that forced Stalin to take this step: “The Soviet proposals were in fact ignored ... The events went on as if Soviet Russia did not exist.”

What dissatisfaction can there be with this treaty from Lithuania if it received new lands from the USSR? At the same time, not a single Lithuanian soldier participated in the battles with the Poles and did not die for the newly acquired territories. And the Red Army fighters fought for Vilna not only with Polish infantry units, but also with fanatical militia from among the Polish youth of the city. Let us recall these events and the “victorious show” that the Lithuanian authorities staged in the city of Vilna that was liberated not by them.

WIN AN OWN HANDS

As the Red Army units approached the city, the Poles covertly mounted artillery pieces on the Three Crosses Hill in Vilna. They suddenly began to shell the advancing Soviet Tanks and infantry. Polish militias in the narrow streets of old Vilna used Molotov cocktails against Soviet troops. The fighting went beyond the central bridge, the freight station, the town hall, the university of King Stephen Batory ... The Red Army suffered losses.

In October 1939, units of the Lithuanian army began a phased occupation of the Vilnius region, which was already cleared of Polish troops by Soviet troops. At their first occupied settlement, the Lithuanians are making a ritual burning of the Polish border sign “separating the people”. At the command of “March to Vilnius”, motorcycle infantry, arrows and cyclists moved. The Lithuanian Air Force was patrolling in the air. And these troops enter Vilna. In one museum photo we see Lithuanian soldiers in heavy helmets, each with two grenades with long handles fixed on the belt in front. What a formidable and warlike look they have! It seems that they are going to a new battle, and they are torn ...

But with whom did they fight? Almost all Polish troops have already surrendered to Soviet troops. Then a military parade was held in Vilna with the solemn hoisting of the Lithuanian flag on the ancient tower of Gediminas. Lithuanian leaders and war veterans from the Poles for the liberation of Vilnius (1919 – 1920) arrived from the capital of Lithuania, Kaunas. That war was unsuccessful for Lithuania.

The other photo shows girls from the Union of Riflemen of Lithuania (militarized organization). They are recognizable by the caps of this union. The girls welcome, by raising their right hand, the hoisting of the Lithuanian flag on the Gedimin tower. Meanwhile, this greeting was the official greeting of the German Nazis.

One more photo. Joyous Lithuanian tankers on several light tanks. They have flowers from the enthusiastic Lithuanian population of Vilna. Funny fact. Tankers still suffered losses. It happened just before the parade in Vilna. Some of them carelessly poured burning kerosene oil. In the hangar and around it the earth was saturated with fuel. Fire flared everywhere. He destroyed eight tanks and damaged about ten. Huge losses for small Lithuanian tank forces! The funny thing is that this military equipment was destroyed by the Lithuanians themselves, and not Polish shells or grenades of Polish militia students. And before that, these light tanks, as winners, defiantly appeared on the streets of this mostly Polish-speaking city!

DIVISION OF TRAITORS AND DESERTERS

Some of these Lithuanian fighters will then become servicemen of the Red Army. This will happen after the formation of the Lithuanian SSR. The 29 Lithuanian Rifle Corps is being formed on the territory of the North-Western Military District. The personnel will wear the old military uniform of pre-Soviet Lithuania, but with Soviet buttonholes and red stars on their caps. But many Lithuanian officers, and the soldiers could not be loyal to the Soviet government. One thing is not clear: why did the Soviet command send this corps to the strategically important section of the Minsk fortified area before 22 in June 1941? The whole division of this corps was on the left flank of the defense, on the most important sector of the front. The result was tragic and sad. In this area, the tanks of Field Marshal Goth and the mobile motorized infantry of the Germans did not meet with stubborn resistance. Lithuanian servicemen for the most part changed the oath. They killed commanders, politrukov and left the position, thereby leaving the Germans almost unprotected corridor more than 100 km wide for a breakthrough. All this contributed to the rapid defeat of the Soviet front. The enemy captured Minsk on the seventh day of the war.

Vyacheslav Molotov, Chairman of the USSR Council of People's Commissars and People's Commissar for Foreign Affairs, speaking at the 5 session of the USSR Supreme Soviet, noted: “The Lithuanian state with its population of 2,5 million people significantly expands its territory and its population by 550 thousand. It receives the city of Vilna, the number of inhabitants of which is almost 2 times the population of the present capital of the Republic of Lithuania. The Soviet Union went to meet the transfer of the city of Vilna, not because it is dominated by the Lithuanian population. No, in Vilna the majority is non-Lithuanian population ... It was stated in the foreign press that in the world stories it was not yet the case that a large state of its own accord would give such a big city to a small state ”(Izvestia, 01.10.1939).

A group of Belarusian party and public figures appealed to the Central Committee of the CPSU (b) with a request to transfer the city of Vilna to the Belarusian SSR. Almost all the signatories were arrested, but later released. And the appeal was subjected to public and sharp criticism. The Kremlin recognized that Lithuanians in Vilna were inferior in number to Belarusians. But, "given the historical past of this city, it was the capital of the Grand Duchy of Lithuania, the city should be Lithuanian." The argument is not entirely convincing. In the Grand Duchy of Lithuania (GDL), the Belarusians constituted the overwhelming majority of the population. Among the hetmans, the governor and nobles were many Belarusians. One of the official languages ​​of the GDL for a long time was Old Belarusian. Many documents of the principality are written in this language.

In 1940, the Lithuanian SSR will transfer from the Byelorussian SSR new territories, including the well-known resort place Druskiniki (now Druskininkai). And there were less Lithuanians than Belarusians. However, in this city lived the pride of Lithuania, the famous artist and musician Čiurlionis ...

There are other interesting facts that some people stubbornly don’t want to recall. Until January 1941, the government of the Lithuanian SSR still remained at its workplaces in Kaunas, the former capital of the country. In Vilnius, the Polish armed underground has not yet been completely eliminated. And the general consuls of European countries did not move to a new capital. Many countries did not recognize the rejection of this land from Poland. By the way about Kaunas. In the photo we see a huge demonstration of the inhabitants of this city in terms of the number of participants. They welcomed the transfer to Lithuania of the long-awaited Vilna region. In another photo, many demonstrators have portraits of Lenin, Stalin, Molotov, Voroshilov, and Dimitrov (head of the Executive Committee of the Comintern). It must be assumed that with such a large number of participants in these meetings and demonstrations, it was not only the Communists and their allies who took part in them.

Lithuanian politicians, especially in the pre-war years, really understood and even said that "without external intervention, Vilna is unlikely to become part of Lithuania." The intervention came from the Soviet Union. And today this city is the capital of Lithuania.

After Lithuania joined the European Union, the situation changed and Vilnius again raised the issue of financial compensation for the “Soviet occupation of Lithuania”. But, as a rule, the occupiers exported material values ​​from the occupied country, and, on the contrary, imported these values ​​into Lithuania. Let's remember then Vilna, remember Memel ...

Ctrl Enter
Noticed oshЫbku Highlight text and press. Ctrl + Enter
We are
Russia's greatest british and haterDiplomats of the People's Commissariat of Defense: on the eve and during the war
Military Reviewin Yandex News
Military Reviewin Google News
12 comments
Information
Dear reader, to leave comments on the publication, you must to register.