October 13 2015
27
Since the middle of the last decade, the Russian industry has been building cars of the Tiger family. Within the framework of a single line based on common ideas and aggregates, several types of automotive vehicles of various purposes with different characteristics are built. Such equipment is supplied to the armed forces and the Ministry of the Interior of Russia, as well as to some foreign customers. During the recent exhibition “Day of Innovations of the Southern Military District”, the Ministry of Defense and the Ministry of Internal Affairs presented at once two armored vehicles “Tigr” used in their divisions.


The armored vehicles of the Tiger family are designed to perform various tasks related to the transport of people or small loads. Thus, this technique can perform the functions of transport, as well as carry out patrols of specified areas or escort convoys. Machines of the family have a similar design and a number of unified units, but differ in some nodes, primarily types of buildings. Such a modular architecture allows a potential customer to choose the machine that best meets their requirements.

An armored car GAZ-233014 "Tiger" was created for the armed forces of Russia. The main feature of this machine is the armored case, welded from sheets of thickness 5 mm. In order to ensure a high degree of unification of different machines of the family, the housing is performed as a separate module mounted on the chassis. The used armor corresponds to 3 protection class by domestic standards. Thus, the power plant and the crew are protected from bullets of machine guns of caliber up to 7,62 mm (without armor-piercing cores). 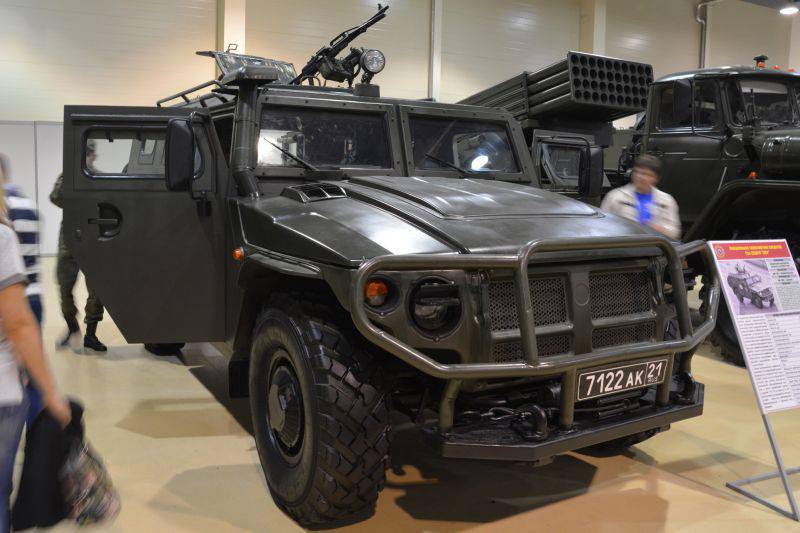 Army "Tiger" is equipped with a Cummins B205 diesel engine with 205 horsepower. It is also possible to use the GAZ-562 motor with an 110 horsepower. The engine is mated to a manual transmission and transmission, transmitting torque to all four wheels. The engine provides maximum speed on the highway about 125 km / h. The gross weight of the machine is 7,2 t, of which 1,2 t falls on the load.

The GAZ-233014 armored car has six crew seats and a landing force. Two are located in the front of the cabin, the rest - in the middle and rear. Four chairs are installed at the sides. In the army configuration, the armored car has two side doors and one hinged aft door. A sunroof is also provided, on which there are attachments for installation weapons. The review is provided with a large windshield and several windows in the sides and stern doors.

The units of the Ministry of the Interior procure and use a version of an armored car called GAZ-233036 SPM-2. This machine has about the same purpose as the army "Tiger", but adjusted for the specifics of the work of the Ministry of Internal Affairs. In addition, the "Tigers" in the army and police performance differ in some design features. In particular, the Interior Ministry wished to receive an armored car with a high level of protection.

Modification SPM-2 is equipped with a diesel engine Cummins B205 or ЯМЗ-5347-10 with power up to hp 205. By preserving the basic indicators of weight, a police armored car has approximately the same mobility characteristics as its army "colleague." The maximum speed on the highway reaches 125 km / h. Load capacity up to 1,2 t.

The main difference between "Tigers" for the Ministry of Defense and the Ministry of Internal Affairs is the hull design. In the GAZ-233036 version, the machine is equipped with an armored hull welded from sheets of 7 mm thickness. Such a body corresponds to the 5 class of protection and ensures the safety of the crew when firing from 7,62 mm machine guns using armor-piercing ammunition or rifles of the same caliber with non-armored bullets.

Also, SPM-2 differs from GAZ-233014 by the presence of two hatches in the roof, embrasures in bulletproof windows and a more spacious fighting compartment. A police armored car can carry up to eight people, including the driver.

To date, several modifications have been developed armored vehicles "Tiger", which are mass-produced and supplied to customers, both Russian and foreign. From time to time new exhibitions of using armored cars are demonstrated at various exhibitions. For example, not so long ago a version of the machine with the Kornet anti-tank missile system was presented. Several such armored vehicles took part in the Victory Parade on Red Square 9 in May of this year.

At a recent exhibition in Rostov-on-Don, two armored cars were shown in simpler configurations. Thus, an exhibition model of the army GAZ-233014 received a Pecheneg machine gun mounted on the hatch mounts, and the police GAZ-233036 was not equipped with any of its own weapons at all. Other design features of these machines can be seen in our photo review. 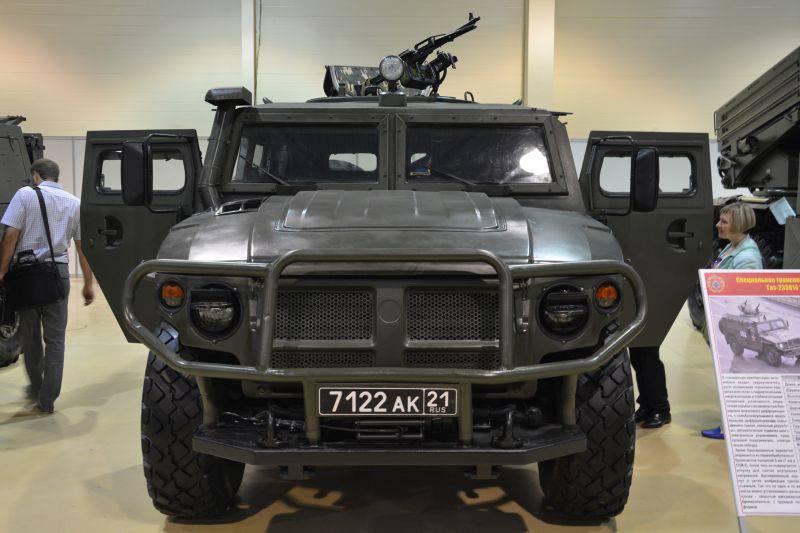 The armored car attracted the attention of visitors - all the time in the cockpit were occupied by interested people. 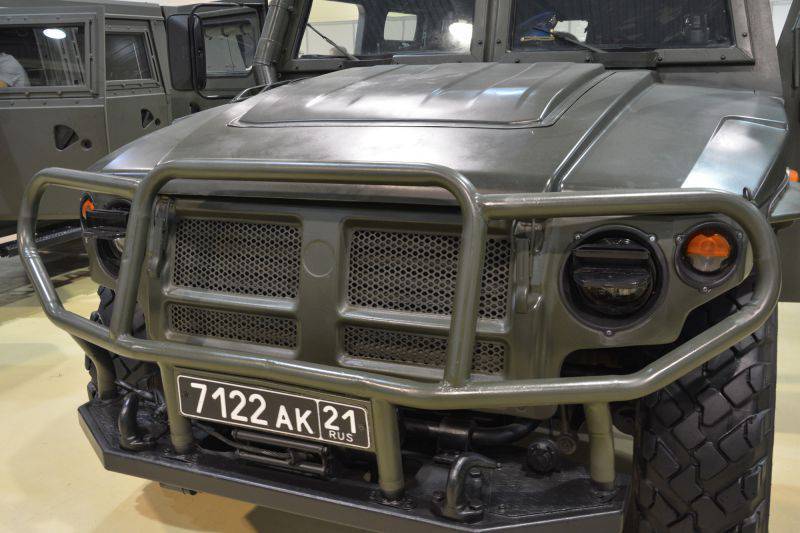 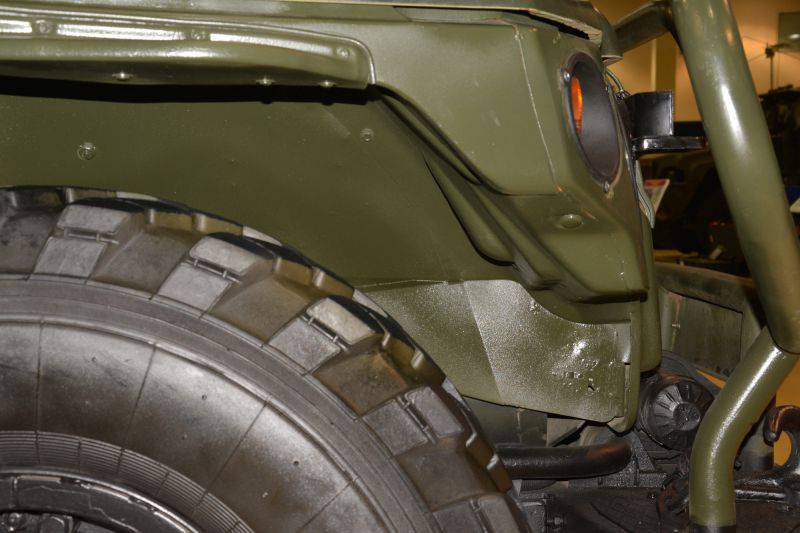 The engine is designed to protect the body. 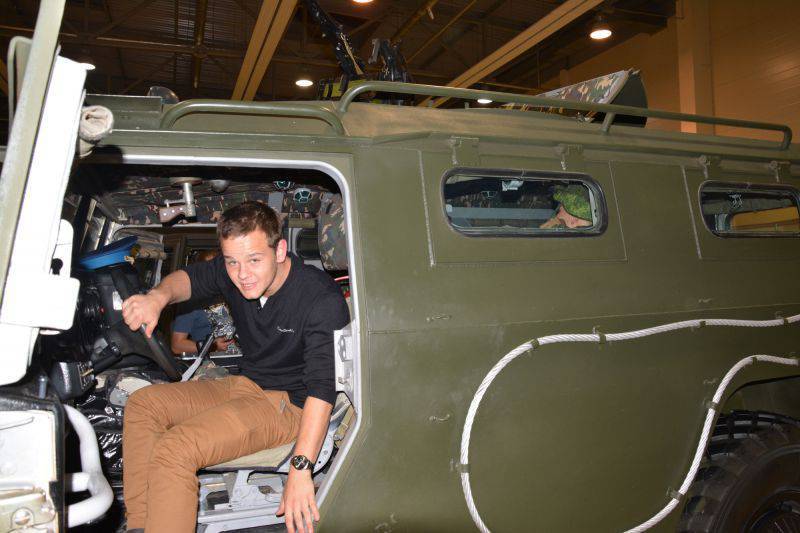 Armored car is convenient for embarkation and disembarkation 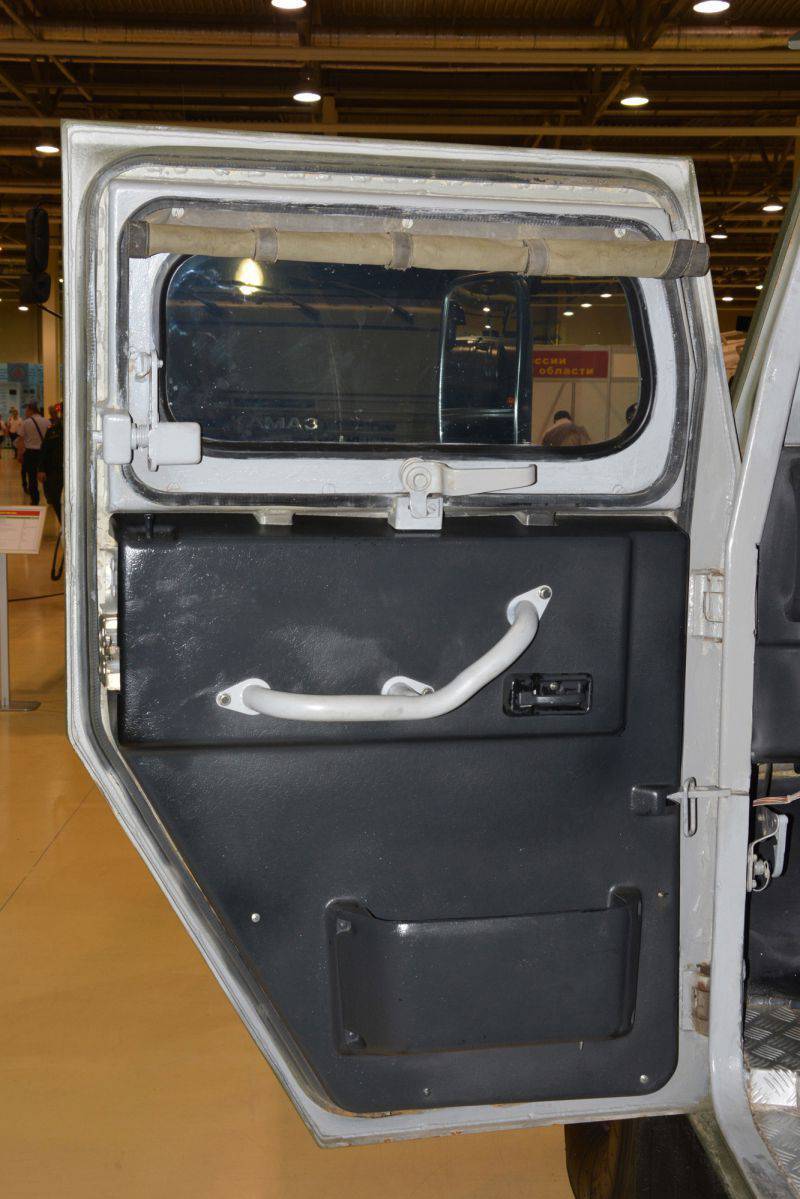 The driver's door. All mechanisms are removed under the decorative panel. 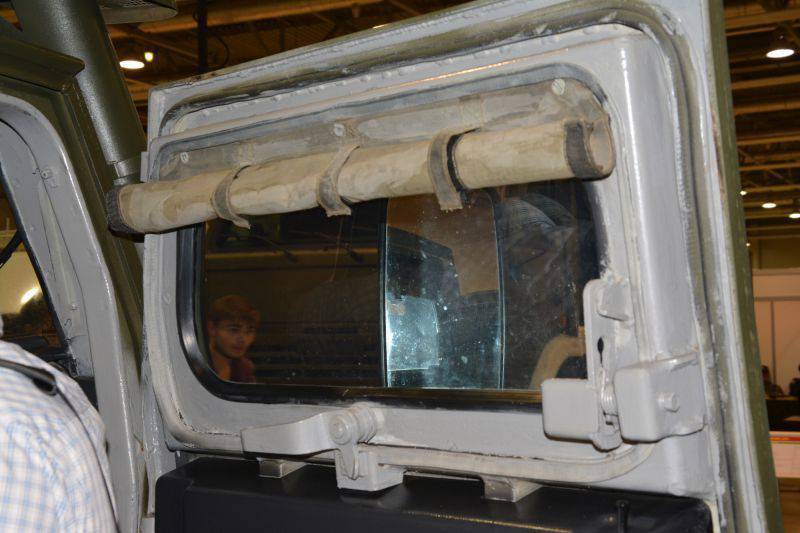 Shutter on the window commander door 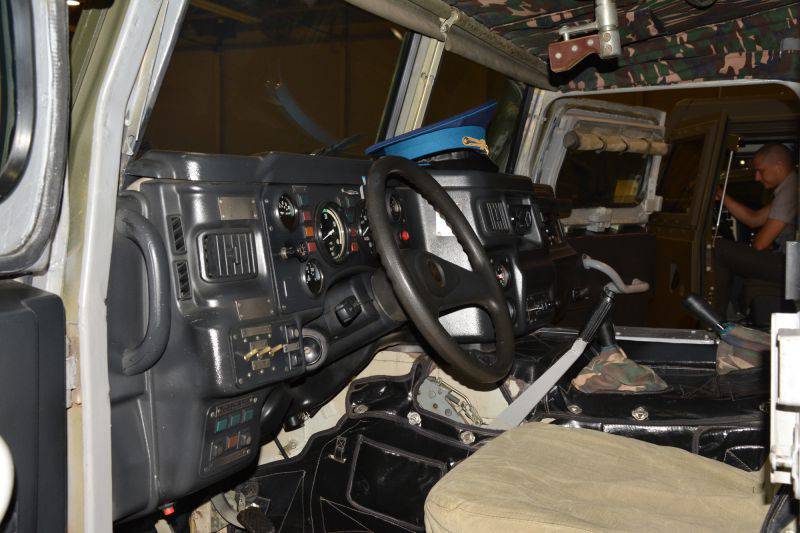 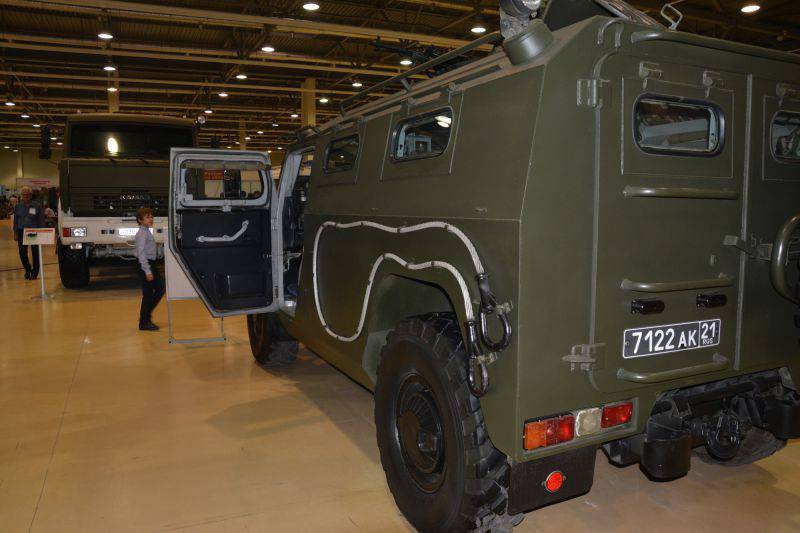 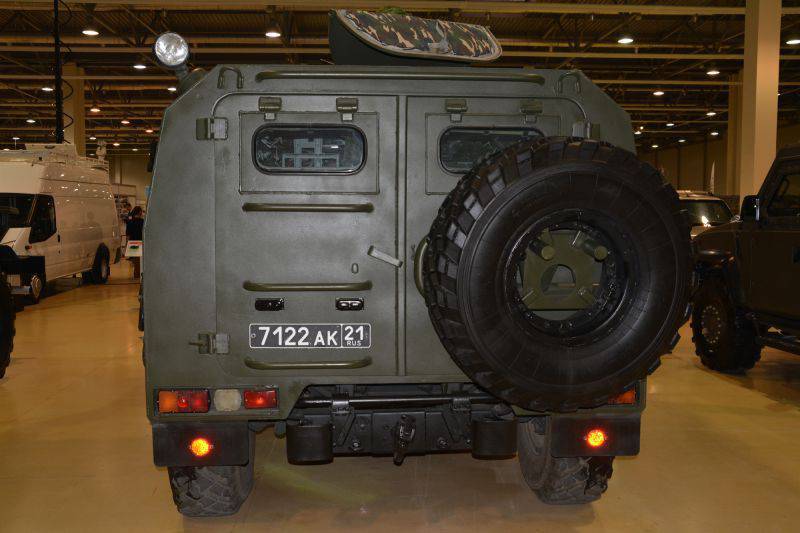 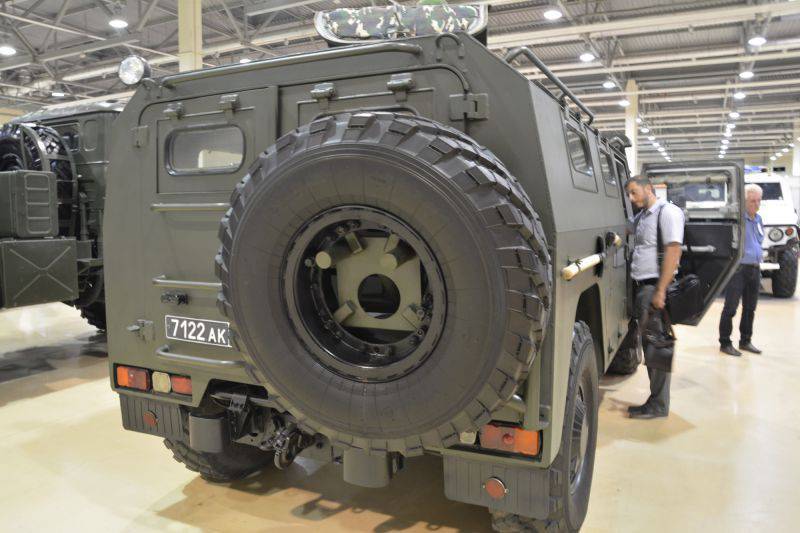 The back of the car from different angles 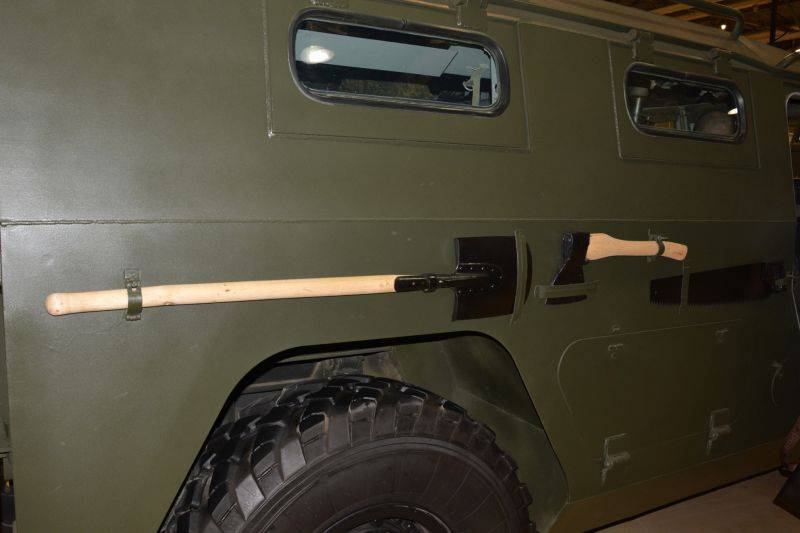 Shantsevy instrument transported on the right side 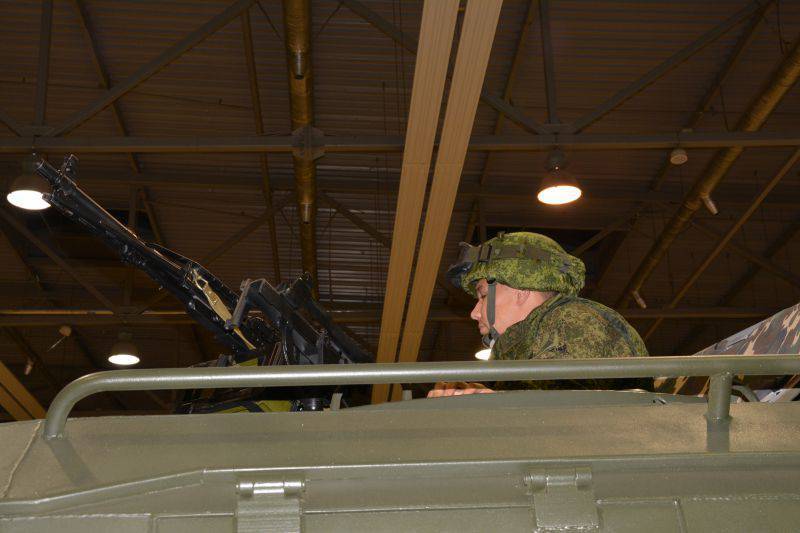 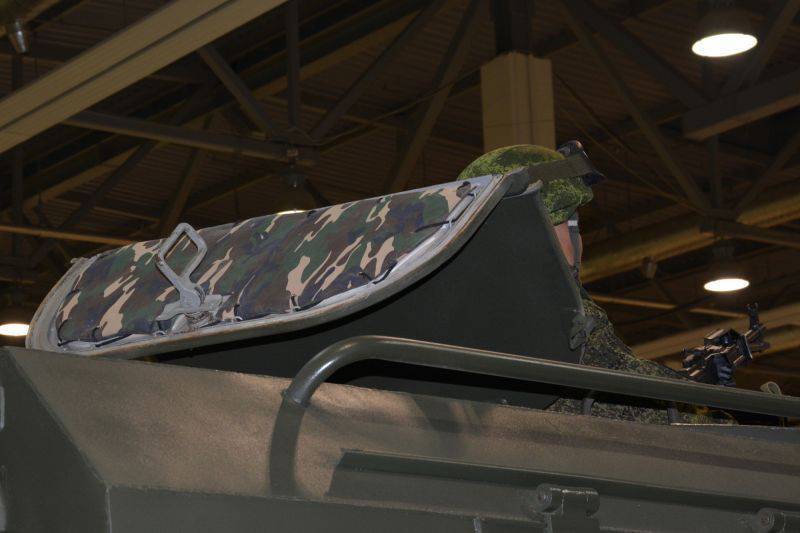 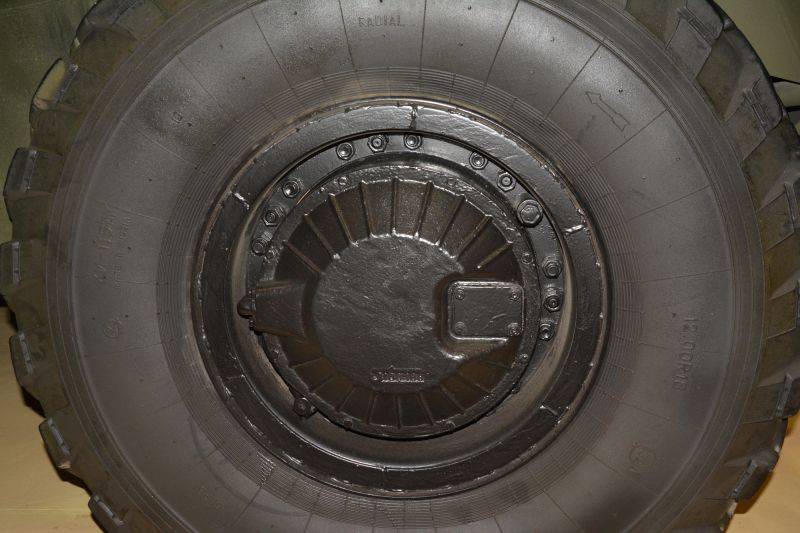 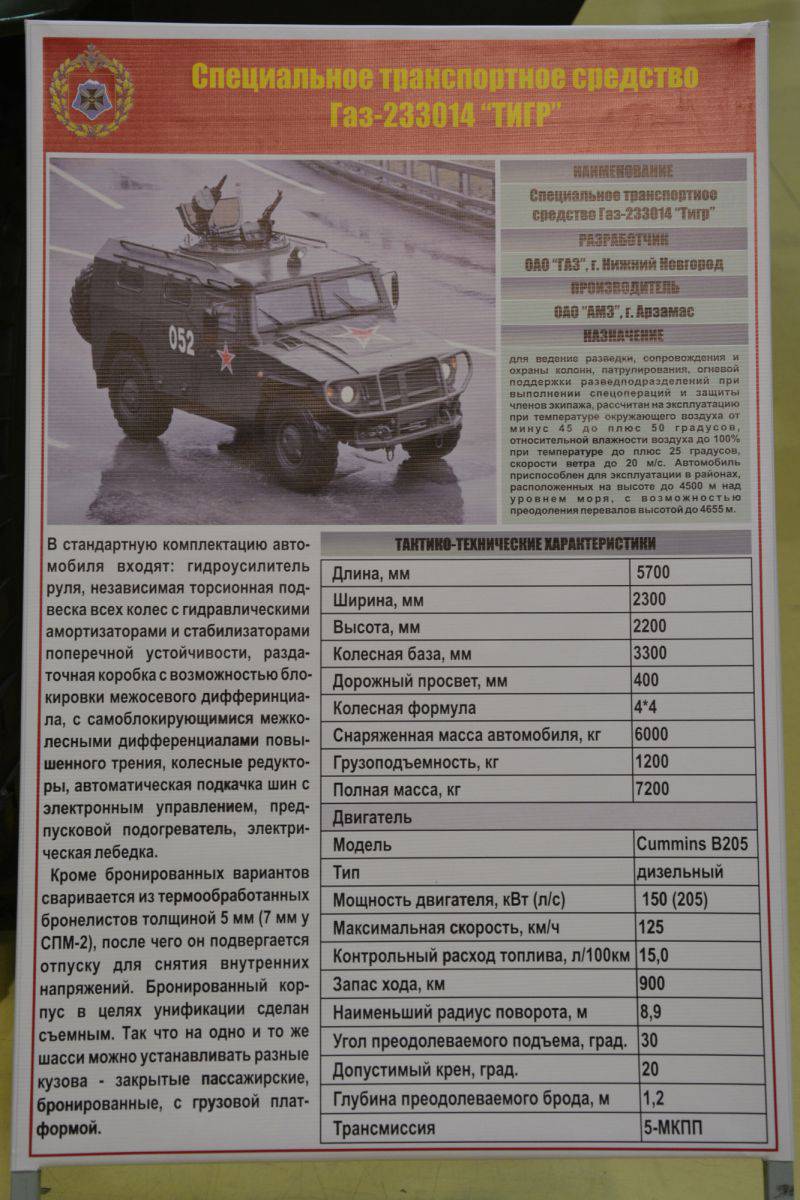 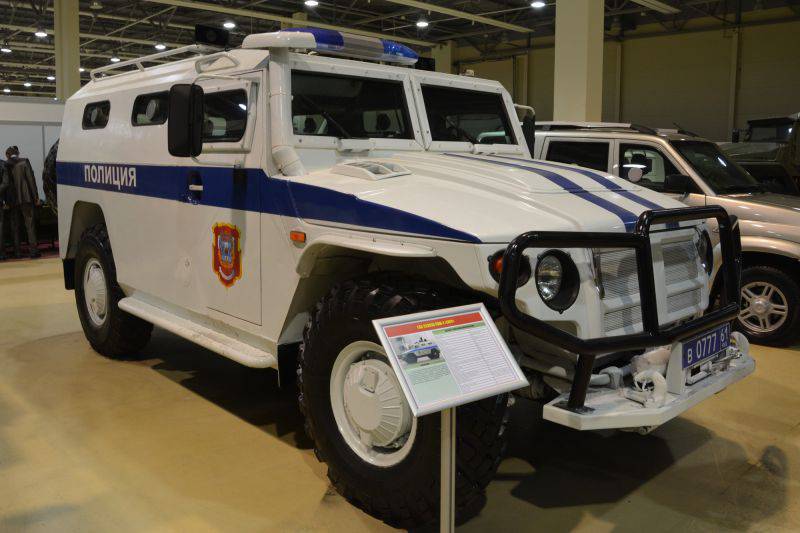 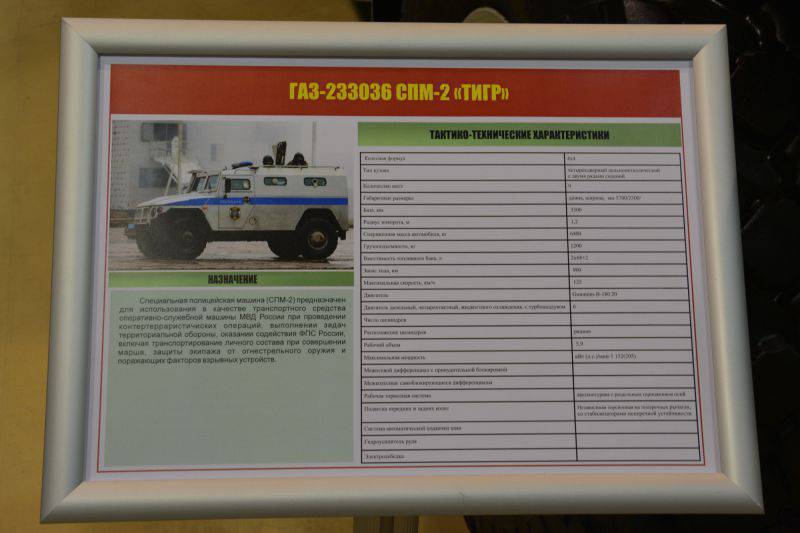 Ctrl Enter
Noticed a mistake Highlight text and press. Ctrl + Enter
We are
Innovation Day of the Southern Military District: Pictures from the ExhibitionThe action “Military service under the contract is your choice!” In Rostov-on-Don: future contract servicemen, exhibitions and “Russian Knights”
27 comments
Information
Dear reader, to leave comments on the publication, you must to register.