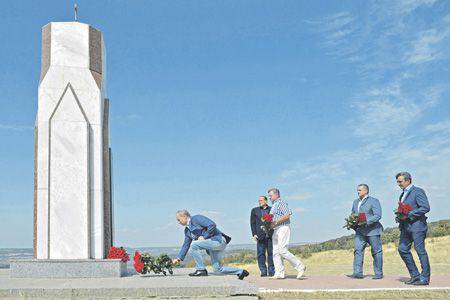 Russian President Vladimir Putin met on September 11 on 2015 in the Crimea with former Italian Prime Minister Silvio Berlusconi. Politicians laid flowers at the memorial dedicated to the soldiers of the Sardinian kingdom who died in the Crimean War. The monument is located near the Mount Gasfort in Balaklava region.

Vladimir Putin proposed to set up a park in Crimea with a monument to Italian soldiers who fought on the peninsula in the middle of the 19th century. Former Italian Prime Minister Silvio Berlusconi supported this idea.

In the Crimea, among the Italian troops, the Bersaliers (special arrows), which consisted of five battalions, also fought. The organizer of the Bersalier corps, Alessandro Ferrero la Marmor (1799 – 1855), died of cholera in the Crimea.

The fact that the Italians in the First World War fought with Russia on the side of the Entente, and in the 1941 – 1943 years they fought against the Soviet Union in Ukraine and in Russia on the Don, politicians did not mention.

Each Bersaler regiment has its own motto in Latin. There are currently six Bersalier regiments. The motto is located on the motto ribbon heraldic coat of arms. For example, let's take the coat of arms and motto of the 3 th Bersalere regiment, as having the most awards and fighting in Ukraine and Russia: “Maiora viribus audere” - dare to do big things on our own.

A brief blazoning, that is, a heraldic description, of the modern heraldic coat of arms of the 3-th Bersaliers' regiment is as follows.

Outside the shield and above it is the golden tower crown, to which are suitable ribbons denoting the regiment's awards for the whole history of existence.

The inscription on the motto is inscribed: “Maiora viribus audere” (the expression of Virgil from the work of Aeneid).

At the new location on the island of Sardinia 18 June 2010, the museum of the regiment solemnly opened. A female bersalier in a red fez gave an excursion. One stand is dedicated to the regimental commander Colonel Caretto, who was wounded and died in hospital in early August 1942 on the Soviet-German front. At home he received a posthumous gold award. In the museum you can see exhibits from Russia: a balalaika and a photograph of Stalin at a young age, a red cloth with the emblem of the Soviet Union.

In September 2014 was appointed the 82 th regiment commander.

On the Internet, you can listen to the modern anthem of the 3 of the Bersaliers Regiment, but the text is published old. In the text there are such words in the chorus: "With a bayonet and a grenade against the Russians and the British." The leader is also said: “When the duce Mussolini conquers a new empire.”

IN VERSES AND PROSE

In my notebook, there is a poem written by the Italian writer Edmondo De Amicis (1846 – 1908) “Bersalleier - Il Bersagliere, 1882”. This poem is posted on many sites of the National Association of Bersergiers.

To imagine that time, let's say that the Italian writer was a contemporary of the artist Vasily Vasilyevich Vereshchagin and the writer Vladimir Alekseevich Gilyarovsky. In Modena, he graduated from military school in 1865 year, became an officer. He participated in the war with the Austrians for independence, the battle of Kustots (24 June 1866 of the year). In the battle the Italian troops were commanded by the famous General Alfonso Ferrero Lamarmor - the brother of the founder of the Bersalier’s corps (there were four brothers in total - all are generals). The Italians were defeated, the young officer decided to leave the army. He retired in the 1871 year with the rank of junior lieutenant and engaged in literary, social and educational activities. Military experience was useful to him when writing military stories. The Bersaliers are mentioned in the story "The Heart", the story "The Little Lombard Scout" (La piccolo vendetta Lombarda): "A few hours later, the little hero was given the last military honors. At sunset, the entire front line of Italians went on the offensive, and along the same road that our detachment rode in the morning, the double column of the Bersalier battalion, the very one that a few days ago watered the hills of San Martino with its gallant blood, stretched.

Note that it was precisely after the battle of Solferino and San Martino during the Austro-Italian-French war in 1859 (40 thousand dead and wounded) that the future Nobel Prize winner and founder of the Red Cross Society, the Swiss humanist Henri Dunant, organized assistance to the wounded.

The little hero is depicted in sculpture, in pictures, and in a movie 100 was captured more years ago. The story can be heard in Italian in the performance of male and female voices. Lombards carefully preserve the ash on which the young intelligence officer could observe.

A prose translation of the poem “Bersalleer” by the author of this article is proposed. In the poem in the art form, courage, courage, bravery, determination, courage and courage are praised. Here semantics follows the patriotic and romantic hero.

But brave, descended from the Cross Mountain.

Caught among us, a strong voice

The doctor examined him: he turned pale,

Gritted his teeth, his look was proud and terrible,

But when he saw an enemy on earth

Hospital downstairs. - And he: - Madness?

Go and lay another dozen.

He took a rifle, pale but strong,

SOME DETAILS OF BERSALESIAN LIFE

In early January, 2015, Colonel Geraci Francesco became the new director of the Historical Museum of the Bersaliers in Rome. It is noteworthy that the previous boss ran the 40 museum for years.

The Bersalier's Corps was created by 18 June 1836 of the year in Turin - according to the Bersaliers, these are the first commandos in history.

Bersaliers cannot live without an orchestra. The Bersaler Orchestra is a unique musical ensemble that uses percussion instruments and plays music on the run. The composition of the orchestra: 25 – 30 musicians with typical instruments of the Bersalier orchestras.

The characteristic step of the Bersaliers during the run is 180 steps per minute.

Orchestras operate in accordance with the regulations. The orchestra includes brass instruments: trumpet - four kinds, flugelhorn - four kinds. Musicians must perform in the prescribed form of clothing with all the regalia, however, historical reconstruction of the form of clothing can also be used. Each orchestra performs the romantic song of the La Ricciolina Bersaliers - “Curly Girl”. By the way, the brush on the fez is called “ricciolina” - curly hair. Women Bersaliers are not only in the shelves, but in orchestras. It happens that orchestras ride on bicycles.

Bersaliers are infantrymen decorated with feathers. Passage on parades - run. Bersalier hats with a bundle of feathers (“feather”) have about 500 feathers.

Bersaliers do not need to give the command "equal" and "close", they perform them independently. Bersaliers wear black gloves, proposed by the founding father in 1839 (gloves of a different color lost their color over time), as well as green braid, which the arrows used to transfer powder flasks. Now the braid is used on parade uniforms. Bersaliers remain for a lifetime (the expression - "Bersaliers always remain 20-year-olds").

The emblem of the Bersaliers shows: a grenade, from which seven oblique tongues of flame are emitted, transmitting movement; hunting horn and crossed carbines.

The official color of the buttonhole of the Bersaliers is crimson.

MEETINGS ARE PRESENTED BY THE REGULATIONS

The Italian Association of Bersaliers has its charter and regulations and has the following objectives:

- preservation and distribution among the Bersaliers of the cult of the motherland;

- preservation of the traditions of the Bersalier’s corps as a style and worldview of life;

- strengthening the bonds of solidarity and friendship between the Bersaliers, both in service and in reserve;

- development of cooperation with other branches of the military and veterans;

- providing moral and material support to members of the association and their families;

- encouraging the development of the cultural, educational and sports level of the members of the association;

- encouragement and participation in civil protection, both at the local and national levels;

- spreading a culture of solidarity, help and volunteering.

The meeting was devoted to the First World War, 6-th Bersaler regiment (which says: "... defeated, but unobstructed in the campaign in Russia", the regiment motto "... E vincere bisognia" - must be defeated), as well as the city of Rimini, subjected to 100 years back of the naval bombardment of 25 May 1915 of the year.

About 100 thousand guests arrived at the meeting. The route of passage was 3 km. A poster of the meeting was created, where three types of Bersalier headdresses are presented for the first time: a hat with feathers, a fez and a modern black beret with a sultan. At the meeting, the civilian and military participants of the meeting were in the prescribed form of clothing and with awards. The celebration was attended by 60 orchestras. At the end of the meeting, the traditional transfer of the relay took place (the bar for cleaning buttons in human height) to the city of Palermo, in which the 64-I meeting in 2016 will be held.

The brass medal "63-I National Meeting of the Bersergiers" (40 mm) was minted. Obverse: the bersalier musician is depicted in the position “at attention” against the background of the arch of Augustus, one of the symbols of the city of Rimini. Reverse: gonfalon (gonorlion) of the city of Rimini.

The Bersaliers walked through the streets, riding bicycles, motorcycles, retro cars from morning to evening for five days.

One could observe a remarkable picture. A bersalier was running in front of the marching column, there was a bicycle on his back, and he was holding a rifle of the last century in his hands. It turned out that not the bersalier was on a bicycle, but the bicycle was on a bersalier. The Bersaliers began using bicycles back in the 1898 year.

TOPONYMS TALKING ABOUT THE HISTORY OF ITALY AND RUSSIA

Note that in the prayer of the Bersalier, toponyms are mentioned: from Mincio to Don, from Don to Poggio Scanno. The fighting at the Mincio River (the length of the entire 75 km, a tributary of the Po) is known not only in Italy, but also in Russia.

Commander Alexander Suvorov during the Italian campaign in April 1799 crossed the river Mincio and led the attack on the French (Bonaparte was still in Egypt at that time).

In Turin, in memory of the battle on the Black River during the Crimean War, one of the streets is called "Black."

In the 1944 and 1945 years, the Bersalier units took part in an offensive on the Allied side in Italy. Under Podgio Scanno, the Bersaliers showed courage and heroism in the fight against fascism.

Ctrl Enter
Noticed oshЫbku Highlight text and press. Ctrl + Enter
We are
List of destroyed the largest and most high-tech enterprisesOn the other side of the “red” and “white”. Izborsk Club Report
Military Reviewin Yandex News
Military Reviewin Google News
37 comments
Information
Dear reader, to leave comments on the publication, you must to register.