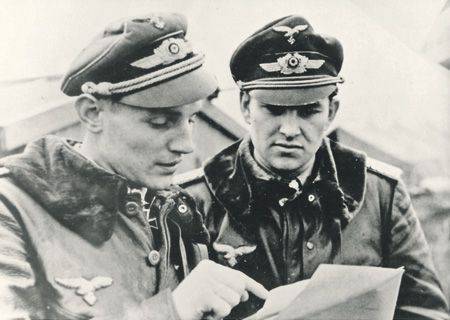 In a recent issue of NVO, material was published which, in my opinion, contained incorrect statements by one of our illustrious marshals aviation about the German pilot Erich Hartmann, well known throughout the world as the absolute record holder for the number of enemy aircraft shot down. Rummaging around in the domestic reference editions available to me, I did not find intelligible answers to the question that interests me, so I turned to foreign sources (I basically do not use the Internet in such cases).

Here in front of me was published in England in 2001 year and reprinted in 2003 year in India not very voluminous work "Who is who in the wars of the XX century". The author is Spencer C. Tucker. Who's who in twentieth-century warfare. On the 131 page I find the last name I need and read: “Hartman Erich (1922 – 1993), officer of the German Air Force. In 1930-s he became interested in gliding and after graduating from high school he entered the service in the Luftwaffe. In March, 1942 graduated from the school of fighter pilots in Zerbst and was promoted to officer. Aimed at the Eastern Front in August 1942, by the end of the war he had more than 1400 sorties and 352 aircraft shot down in his flight documents, which is the highest figure in stories air war. Seven times he made a forced landing, once (August 1943 of the year) was taken prisoner, but he fled and returned to the location of the German troops. Most of his victories were won in battles with the Russians, but he had a chance to make short strides in Romania, where he shot down five American fighters "R-51" "Mustang". At the end of the war, he was handed over to the Russians and, after being released from prison in 1955, entered the service of the German Air Force, of which he left the colonel in 1973.

In the same book there is information about our famous fighter pilot Ivan Nikitovich Kozhedub (1920 – 1993), and he was given eight lines more than Hartman.

Since the book was written by a professor of military history at the Virginia Military Institute (Lexington, Virginia, USA) and published in England, most of its more than 1000 articles are occupied - surprisingly, the Anglo-American military and government leaders, public figures and inventors. However, in fairness, it is worth noting that it presents prominent military and civil servants of other countries, including, in addition to I.N. Kozheduba, and our military leaders and statesmen of both the pre-revolutionary and Soviet periods, such as: M.V. Frunze, Generalissimo I.V. Stalin, Marshals of the Soviet Union G.K. Zhukov, M.N. Tukhachevsky, K.K. Rokossovsky, D.F. Ustinov, F.I. Golikov, V.I. Chuykov, admiral Fleet Soviet Union S.G. Gorshkov, Marshals of the Armored Forces P.A. Rotmistrov and Ya.N. Fedorenko, generals M.M. Popov, A.I. Antonov, S.V. Ilyushin, I.I. Fedyuninsky, etc. In this regard, I have no reason not to trust the source mentioned above.

There is another book that I would like to refer to, it is called “The best fighter pilots of the Second World War”. The author of this book is R. Jackson (R. Jackson. Fighter aces of World War II). Moreover, in a book published in the UK at the end of 1970, Ivan Kozhedub’s words are set as an epigraph: “Choose a person who has done his work perfectly as a model, and follow his example all your life.” This book describes the 14 best aces of the Second World War, including Hartman and Kozhedub. The book contains many interesting details about the German pilot and the Luftwaffe, and I, not wanting to propagandize the achievements of the Nazis, can not help but mention some of them. So, in August 1943 of the year in the skies over the Donbas Hartman's plane was shot down and he made an emergency landing on the territory controlled by Soviet troops. The pilot was briefly interrogated and sent to the rear by convoy. He, however, took advantage of the favorable moment that arose during the German air raid, started a fight with the guard, jumped out of the truck and ran, hiding in a field planted with sunflowers; then he crossed the front line and returned to his squadron.

In the fall of 1943, Hartman had 150 downed aircraft on his account, and he became known on both sides of the front line. German propaganda often mentioned his name in his programs, his photos were printed in newspapers along with photos of other aces of his squadron (JG-52). To our military he was known as Karaya-1 - by the call sign that the German pilot used in the radio exchange, and later received the nickname Black Hell. It is alleged that the Soviet command even established an award in 10 000 rubles to anyone who killed Hartman. The nose of the Messerschmit, on which Hartman flew, was decorated with a characteristic pattern in black paint. The book states that supposedly as soon as the enemy pilots realized that the pilot who flies on this plane is thus Karaya-1 and the Black Devil, they began to show an intensified reluctance to engage him in battle. Hartman had to paint over the drawing, and his Me-109 became indistinguishable from other aircraft. The result was amazing - in January and February of 1944, he shot down 50 airplanes in just 60 days ...

Hartman scored his last victory in the skies over Brno (Czechoslovakia), knocking down the Soviet Yak-11, and a few hours later he and the personnel of his unit surrendered to the armored unit of the US Armed Forces, but later they were all handed over to the Soviet military command. Hartman served 10 for years in Soviet camps and returned to Germany in 1955.

VICTORIES WERE NOT LIQUE

The above book emphasizes that the striking results achieved by the German pilots in the battles on the Soviet-German front were made possible by two crucial factors: the lack of experience of the air force officers and sergeants of the Soviet Air Force (with the exception of well-trained guards fighter air regiments that operated excellent) and the fact that the majority of German pilots for almost four years continuously, with the exception of short vacation breaks, were on the East Coast onte. As a result, with the accumulation of experience, the Russian front became a “happy hunting ground” for German pilots, many of whom became asses here ...

Hartman himself gave a fairly simple explanation for his amazing success: “In the air I was afraid of big and unfamiliar factors, in my world of feelings, clouds and sun were hatred and love. Today, I’m sure that 80 percent of my opponents didn’t suspect that I was somewhere near, until I opened fire. In this regard, my air battles were quick and easy. But one factor has always worked in my favor more than the rest. I found that I could see the enemy’s planes much earlier than my comrades — sometimes a few minutes earlier. It was not the result of experience or acquired skill, but the advantage that was given to me from birth. My rule for air combat is that the pilot, who was the first to see his opponent, had already half won ... ”

That's all about Hartman.

I really do not want us to again have hats and disrespect towards the enemy. During the Great Patriotic War, a strong, skilled and treacherous enemy fought with us, who in three months of fighting reached Moscow, and in the first year of the war the Red Army lost several million dead and prisoners. Today, the situation on our borders is very similar to the pre-war one, with the only difference being that the Soviet Union was then, and now the Russian Federation. But even then, and now we are left alone with our superior enemy, and we should only rely on ourselves.

We are in Yandex Zen
What you didn't want to know about England
List of destroyed the largest and most high-tech enterprises
122 comments
Information
Dear reader, to leave comments on the publication, you must to register.