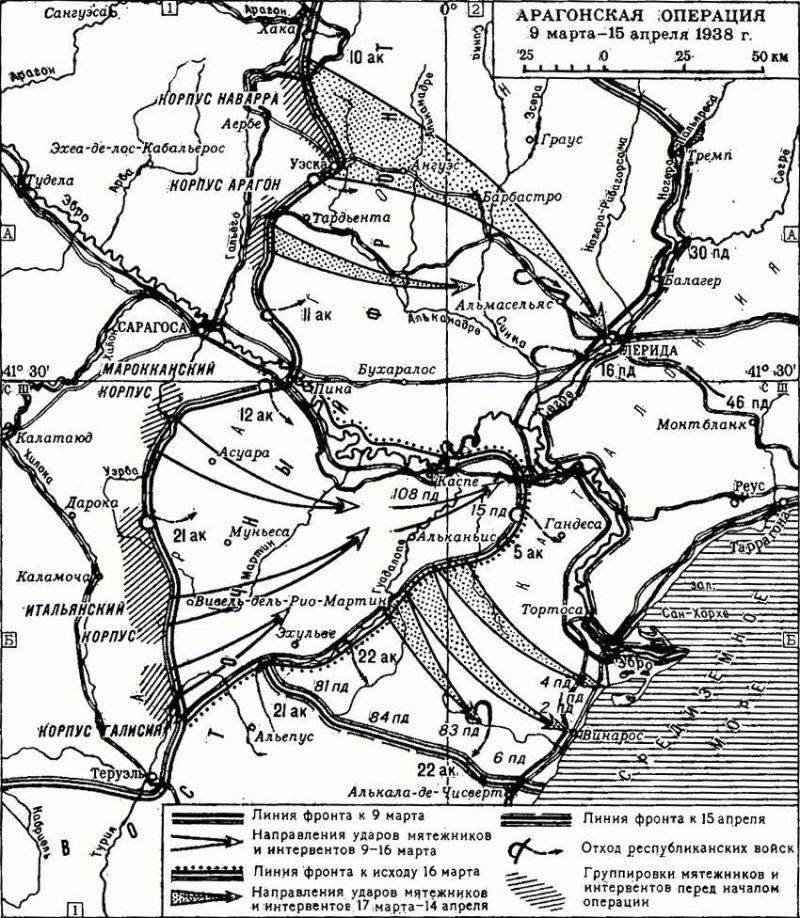 As is known in the Civil War in Spain, two irreconcilable political and ideological forces clashed: on the one side are the Republicans - liberals, left socialists, communists and anarchists, on the other - Spanish nationalists - monarchists, phalangists, carlistists and traditionalists. Bloody struggle went on for three years. In the course of the war, Republicans supported the USSR, France and the international forces of the Third International, and nationalist forces - Italy, Germany and partly Portugal. Tens of thousands of volunteers fought there on both sides of the front against each other. The decisive, turning point during the war was the battle of Aragon in March-April 1938. On the Aragon front, the Republicans had a lot of manpower - about 200 people with a moderate amount of equipment (000 guns, about 300 armored units and 100 aircraft). The nationalists concentrated 60 divisions (up to 20 thousand people), 250 guns, 800 tanks and wedges and 500 aircraft.

March 9, 1938 the nationalists of the strongest artillery and aviation forces launched a general offensive in Aragon south of the Ebro and broke into republican positions. Two Catalan divisions immediately took flight from Alcaniz, without even waiting for a ground attack. A gap was created in which the shock units of the nationalists immediately moved — two whole corps. On March 12-13, republican defense no longer existed between the Ebro River and Teruel; an avalanche of nationalist divisions moved toward the Mediterranean Sea. Nationalists and Italians advanced at a huge speed by Spanish standards - 15–20 kilometers daily. The offensive of the nationalists was consistent. In the Eastern (Aragon) operation, nationalists applied the form of combined frontal and flank attacks on a wide front, using mountain-type mobile corps (Moroccan, Navarre and Italian) and operational air forces. These actions led to decisive results, as they were associated with reaching the enemy flank and rear. Having broken through the front and entered the operational space, the nationalist command immediately replaced the brigades and divisions that had made the breakthrough with fresh units of generals Garcia Valino and Escames. The shock groups therefore constantly maintained a healthy offensive impulse, and therefore the attack did not run out of steam.

The population of the villages of Aragon, tired of republican atheism and the arbitrariness of the “uncontrolled” anarchists, met the nationalists with a bell ringing and a phalangist salute. In a week, the nationalists marched to 65 kilometers, forming a deep ledge in Lower Aragon and beating an enemy force on the north bank of the Ebro from the south.

March 25 nationalist troops occupied the whole of Aragon and started fighting on Catalan territory. In western Catalonia, the nationalists met with very strong opposition and were forced to stop in the valley of the Segre River, which flows from north to south. But they still occupied one of the bases of the Catalan energy - the city of Tremp. Reasonably fearing military intervention by France, General Franco forbade troops to approach the French border more than 50 kilometers and ordered to advance not to the north, but to the south-east, to the sea. Performing the will of the caudillo, the nationalists quickly regrouped their forces, concentrated the infantry-motorized and tank fist south of the Ebro and again broke through the enemy, just re-created, front. In addition, the attackers reigned supreme in the air.

The nationalists continued their march towards the sea. 1 of April south of the Ebro, they captured the Gandes, and 4 of April north of the Ebro, after a week of fighting with the Campesino 43 division - Lleida. The troops of General Aranda have already seen the blue of the Mediterranean Sea from the dominant heights. 15 April 1938 of the year Navarre divisions of Colonel Alonso Vega fought to the Mediterranean near the fishing town of Vinaros and occupied the 50-kilometer stretch of coast. Joyful soldiers entered the cold waves of the sea to the waist, many sprinkled themselves with water. Army priests served prayers of thanksgiving. Bells rang throughout nationalist Spain. The battle was nearing its end. “The victorious sword of the caudillo cut Spain in two, still remaining in the hands of the Reds,” the national anti-crisis center wrote about this event. In the five-week “spring battle in the Levant,” the nationalists won a major victory, which became the turning point of the entire war. They finally captured Aragon, occupied part of Catalonia, reached the approaches to Barcelona and Valencia, and cut the republican territory in two.

The nationalist military advantage is now clearly outlined. The number of nationalist provinces increased to 1938 by May 35, while the number of republican provinces decreased to 15. The center of Spain, which remained in the hands of the Republicans, was now cut off from its military-industrial Catalan arsenal and from the French border.

Republicans in five weeks of battle left important territories to the enemy and lost at least 50 000 wounded and killed, more than 35 000 captured and over 60 000 deserters, that is, much more than half of the troops on the Aragon front to 9 in March. They also lost most of the military equipment that participated in the battle. Interbrigade received a fatal blow and actually left the stage. Nationalists in the “spring battle” lost no more than 15 000-20 000 people. The damage in the technique was noticeable, but the wounded guns and armored units remained on the nationalist territory and were repaired.

The nationalists defeated the enemy not only by the quantitative and qualitative superiority of the troops, their art of warfare progressed, their command did not tire of analyzing the defeat of the enemy troops. The seizure of territory was considered a secondary matter. As a result, the nationalists defeated, albeit, inferior to them in forces and means, but still a large - 200-thousandth grouping of the enemy and occupied a significant territory.

However, the USSR and France did not leave the Republic, just as Germany and Italy did not leave the nationalists. Supplies of Soviet, French, and Comintern food, fuel, medicine, clothing did not stop, and soon Soviet steamers delivered a new large batch of Soviet heavy weapons to France, including armored vehicles and aircraft with improved models. The war was raging for a whole year in Spain.

Ctrl Enter
Noticed a mistake Highlight text and press. Ctrl + Enter
We are
Spanish partisans against FrancoAs anarchists, they wanted to overthrow the Soviet government. The Black Banned Underground in the 1920s - 1930s
25 comments
Ad