Europe for Europeans, or a new turn in the history of migrants

October 12 2015
19
On October 7, the information world was detonated by a “bomb” launched in the London media space The Times. The publication reported that in the coming weeks, the European Union intends to deport more than 400 thousands of illegal migrants who are denied asylum. The London newspaper referred to the secret plans of the European Union, which it became aware of, thanks to a leak of information from the headquarters of the European Commission. 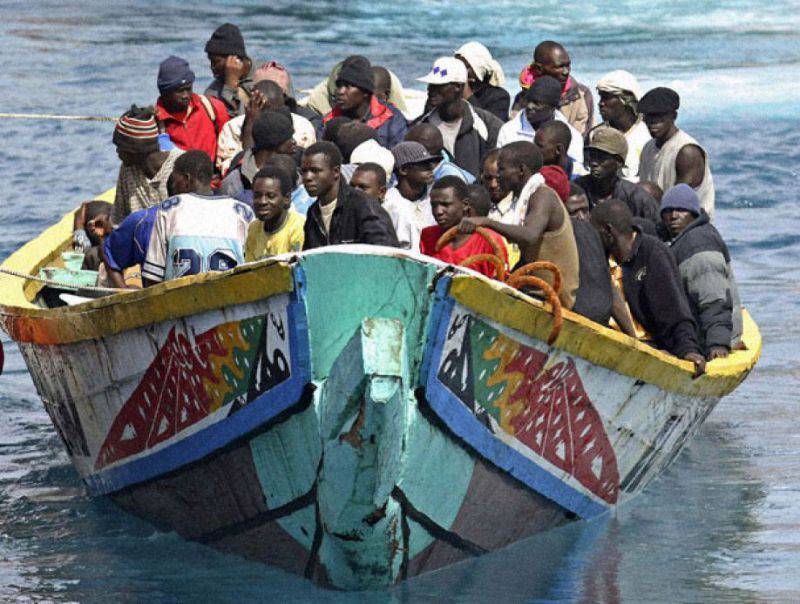 Warships on the way of illegal migrants

The Brussels bureaucrats, distributing quotas for migrants, could not achieve obedience from the governments of countries belonging to the European community. Now, in the opinion of the English newspaper, European officials decided to send home economic migrants from Niger and Eritrea. Can also send refugees from Afghanistan, Libya and Syria. The expulsion of unwanted migrants will take the European border agency Frontex. People subject to expulsion are scheduled to be detained so that they cannot evade deportation.

According to The Times, Brussels threatened Niger, Eritrea and other countries to break trade and visa agreements with them, curtail economic assistance programs and even fine them if they refuse to accept their economic migrants back.

The number itself was impressed - 400 thousands of migrants are subject to deportation! Moreover, exactly on the same day, October 7, the largest German daily newspaper Bild, with reference to the German authorities, said: from January to August 2015, the external borders of the European Union illegally crossed 506 thousands of refugees. Bild writes: the main flow of migrants came to Europe through the maritime border of Greece and Turkey. Only from April to August, 210 of thousands of refugees illegally crossed it. Most of them came from Syria - 60 percent, another 18 percent reached Europe from Afghanistan.

It's a lot. Last year was half as much. Today, most German lands are filled with gyms and empty buildings. The Office for Migration and Refugees does not even have time to register new arrivals. Local politicians are at a loss, and only the highest authorities (German Chancellor Angela Merkel and President Joachim Gauck) express their readiness to cope with the problem, not forgetting to remind you: Germans also fled to other countries during national-socialism.

You can cope with the problem in different ways. You can fill up refugees with plush toys, provide shelter and table at reception points, as it was a couple of months ago. You can deport hundreds of thousands of poor fellows for whom there is no place for the celebration of life, called the European Union, as it is planned now.

Europe actively protects itself from refugees and displaced people. During the week, her warships began the second phase of a special operation against smugglers who transport illegal migrants to Europe via the Mediterranean. At the first stage, the European Union ships rescued refugees, collected information about illegal carriers. Special detachments are now formed, the task of which is to identify and arrest these very carriers, and their boats to sink. The new mission was called Sophia - after the girl from the family of rescued refugees, who was born on board a German ship during the first stage of the special operation.

Germany in the Sophia mission is represented by the frigate Schleswig-Holstein and the auxiliary vessel Werra. The operation involved the German military 950. At the first stage they were 320. Already in these figures one can feel the scale of the tasks and how the European leaders intend to solve the problem.

Politicians have a lot of assistants who have learned in information wars. This is the same Bild, which has a circulation of twelve million, scares the innocent burghers with reference to the secret documents of the German government that in the year 2015 one and a half million refugees will arrive in Germany. The government will not confirm these data, and the newspaper itself in two days will come out with other figures, which are given above. However, the stuffing is done, and the new publication doesn’t disavow him much.

Political scientists, sociologists have joined the cause. For example, on Wednesday in Berlin, a press conference was held with great fanfare with the participation of Syrian-German civil initiative Adopta Revolution Elias Perabo, analyst of the Berlin Scientific Center for Social Research (WZB) Heiko Gibler and Syrian activist, head of organizations Planet Syria and The Syria Campaign Haida Haida They reported on sociological research conducted among Syrian refugees. True, presenting the results of the survey, Heiko Gibler modestly admitted that “it is impossible to call him strictly scientific and in all respects representative”. But this reservation went unnoticed. Everyone was fascinated by the figures voiced by a German analyst who interviewed 900 randomly selected Syrian refugees over the week. No one was surprised that these people flee to Europe not for economic reasons, but from war, because of fear for their lives. This answer was given by the 92 percentage of the respondents.

Then the fun began. As the authors of this pseudoscientific research announced, “the overwhelming majority of Syrians seeking asylum in Germany fled the country from the regime of Bashar al-Assad.” In support of their withdrawal, they cited the following data at the press conference: “The majority of Syrian refugees (70 percent) blame the bloodshed in the country on the Assad government and only the 32 percent on the Islamic State militants, 18 percent on the Free Syrian Army ", 16 percent on Al Qaeda and 8 percent on Kurdish rebels."

Not bothering (with a calculator or a bar) to check this ridiculous arithmetic, the participants of the press conference rushed to replicate in their publications the data of the “researchers”, as well as the biting phrase of Elias Perabo. “Figuratively speaking,” he said to the gullible public, “one can say that the Syrians see the IG (the Islamic State terrorist organization GG) the hallway to hell, and in the Assad regime hell itself,” I quote from “Deutsche Welle. "

The writing and commenting fraternity could not refrain from its conclusions, and it made them: there will be no Bashar al-Assad - there will be no refugees, and the flow of migration to Europe provokes actions in Syria by the Russian Aerospace Forces. Such is the quality of European journalism today, not hesitating to juggling, distorting facts and trivial lies. However, these efforts do not bring the solution of the problem with refugees at all, except that ordinary people are frightened and their dissatisfaction is directed to the right direction for politicians.

Meanwhile, blog commentators say that the flow of migrants to Europe was sent by the Turkish authorities, on whose territory more than two million refugees have accumulated in Syria since the beginning of the conflict. This was indirectly confirmed by the President of the European Council, Donald Tusk. In his opinion, “the EU should better protect its external borders. Europe expects exactly the same actions from Turkey. ” Tusk made this statement following a visit by Turkish President Recep Tayyip Erdogan to Brussels. The European Union and Turkey have developed an action plan that will reduce the flow of migrants to Europe. As the German DPA news agency reported, citing sources at the European Commission, the relevant document was handed over to Erdogan during his visit on Monday, October 5.

The presented project provides for the allocation by the European Union of Turkey’s money for the construction of six new centers for the maintenance of Iraqi and Syrian refugees, of which there are already more than 2,2 million in the country. Brussels suggests Ankara to strengthen joint protection of sea and land borders, to strengthen border control between Turkey and Greece,
make visa relief for the Turks.

What went wrong? The Turkish authorities, sensing the interest of Europeans, decided to continue bargaining. First of all, they began to insist not on easing in the visa regime, but on its complete abolition. But the main thing is that Erdogan wants to create a so-called security zone in the north of Syria. According to the Turkish president, this will play a significant role in solving the problem of refugees. In other words, Erdogan himself is ready to send home to the Syrians who have settled in Turkey. Europeans were not happy with this idea, since "the creation of such a zone is possible only with a large-scale military presence in the region."

As usual, the opinion of the European Union was summarized by German Chancellor Angela Merkel. Praising Turkey for its outstanding efforts to receive more than two million refugees, she nevertheless called it “the starting point for illegal migration” and said: “Turkey needs our strengthened support in supplying and accommodating refugees, protecting borders and fighting against traffickers” . Point. Wishlist Erdogan Merkel is not ready to be considered seriously.

However, it is necessary if the “starting point of illegal migration” gives Europe a new portion of refugees. There you will not dissuade bikes about the Russian aerospace forces. Moreover, Europe itself is torn apart. The authorities of the peripheral countries are trying to provoke refugees in Germany. Merkel's calls to comply with the Dublin agreement (according to him, the country of first arrival in the EU must register the migrants and ensure minimum humanitarian standards for their content) remain a voice in Germany. The problem does not go away. She only sharpens.

…The world is not without good people. Trouble refugees and in Europe. Examples for this are. As the TASS news agency reported on Thursday, at a meeting in Sochi with representatives of the BRICS countries' migration services, Zlatko Zigich, director of the Moscow Office of the International Organization for Migration (IOM), said that the experience of receiving migrants in Russia could be an example for the EU countries. Zhygich recalled that since the beginning of the conflict in the south-east of Ukraine, Russia had hosted more than 1,1 million Ukrainian citizens, while the Russian population had hardly felt this influx.

IOM Europe has not heard the wish of the representative ...

Ctrl Enter
Noticed oshЫbku Highlight text and press. Ctrl + Enter
We are
"Trouble" of the Promised Land. African immigration to IsraelWhat to do with the refugees? Eastern Europe to host thousands of Africans and Asians
Military Reviewin Yandex News
Military Reviewin Google News
19 comments
Information
Dear reader, to leave comments on the publication, you must to register.