Signal to the West is an expert on the participation of the Caspian flotilla in the Syrian war. 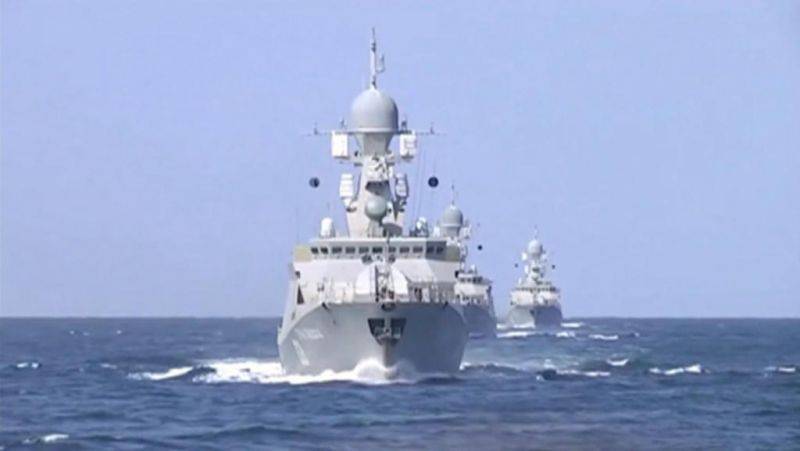 Russia announced on Wednesday, October 7, the use of cruise missiles launched from ships in the Caspian Sea by terrorists from the Islamic State group. 26 rockets covered a distance of one and a half thousand kilometers over the territory of the three countries, before hitting the alleged targets of the Islamists. French expert, coordinator of security programs of the French Institute of International Relations Korentan Bruistolen believes that the goal was not military, but, above all, political. Moscow decided to demonstrate the power of the Russian weapons potential adversaries in the West and arms importers in the Middle East. This was Korentan Brüstolen told in an interview with RFI.

Korentan Brüstolen: What we see now in Syria is the desire to demonstrate that Moscow broke the Western monopoly on the use of this type of cruise missiles. Typically, such cruise missiles are used at the very beginning of the operation in order to take the enemy by surprise. And very few states have such weapons, in particular, the United States, as well as some other countries that have bought them mostly from the USA too. France, they have, but a smaller range.

Moscow wants to demonstrate that the technological gap between the West and Russia has narrowed. The abyss, from which Russia suffered for a long time. But beyond that, in this one must see the desire of the Russians to create an image of a great power, which can intervene in external conflict in a manner that only the United States could afford before. And this was a confirmation of Putin’s speech from the UN podium, where he presented himself as the “authorized representative” of the alternative to the United States and the West.

That is, it is more a message to rivals and opponents of Russia than the real need to use such weapons to solve combat missions in Syria?

I think this is actually a demonstration of ability. The real goal (here I’m not talking about the physical goal in the face of the “Islamic State) is the West and its allies, to whom Moscow wants to send a clear message.

Cruise missiles embody the Western model, which implies that since we do not want to take risks, do not want to approach the target, we will use systems that have an exorbitant cost of millions of dollars. This can be justified when we are opposed to an air defense system and want to neutralize its facilities before proceeding with the use of forces aviation in a calmer and less risky rhythm.

But in today's situation there is no risk of opposition to air defense, because Russia is an ally of Bashar Assad, who, in turn, is the only one in this conflict that possesses anti-aircraft complexes. That is, here the purpose of this operation is different.

The same effect could be achieved by military aircraft, which is participating in the battles for the second week?

Yes, I think that, by and large, cruise missiles may not have been the best way to deliver the required amount of explosives to the target. They definitely had an alternative.

In addition to the political and diplomatic message, can we see a demonstration for potential customers? After all, the countries of this region are now in the process of re-equipment.

Yes, a demonstration of opportunities may be needed, on the one hand, in order to intimidate potential adversaries, for example, the West or allies of the West. But on the other hand, try to fill up the list of orders of the Russian defense industry.

We have little detailed information about the goals. As you said, is this type of missile usually used against objects that are well fortified, against bunkers?

Cruise missiles are usually used against immovable objects. They can not hit mobile targets, because the guidance system does not allow it. Thus, they are used against infrastructure, against buildings more or less fortified. Not necessarily super strengthened - it depends on the warhead, it depends on the flight path. But in any case, strikes are directed at buildings or at stationary objects. Such a missile is not intended to strike at the front line, for example, a cruise missile may not be suitable to support a strike by ground forces. This should be a blow deep into targets that are of strategic interest, such as the command headquarters.

Do you think the Russians warned their allies in the region about striking, be it Iranians, Iraqis or Syrians? This is the first part of the question. And the second is that if the NATO forces are still nearby, they should have noticed what happened?

Ideally, we have the right to hope that Russia warned not only the allies and the states over which these cruise missiles flew over, that is, Iran, Iraq and so on, but also the armed forces of the coalition. I don't know if that was the case. It would be interesting to find out. Exactly, given the presence in the region of reconnaissance aircraft sent there by the coalition, we should have noticed these missiles before they hit the targets.

This is the first such case, because I don’t remember that this type of missile was used during the Georgian campaign.?

Yes, I think this is really the first such case. In Georgia, they inflicted quite classic air-to-ground or ground-to-ground strikes; they were short range, nothing that could have a distance of one and a half thousand kilometers. There is indeed a strategic application. It is a political and diplomatic tool to declare that Russia is a power that can perform strategic tasks at long distances, and not just near its borders, that it is a power that can influence regional conflicts beyond what they call their "near abroad".

Ctrl Enter
Noticed a mistake Highlight text and press. Ctrl + Enter
We are
What you didn't want to know about EnglandInterview by President Bashar Al-Assad to the Sunday Times
56 comments
Information
Dear reader, to leave comments on the publication, you must to register.