October 9 2015
12
ARMSCOR .22 The “Tuason-Craig Micromagnum” (TCM) is a modern, high-speed, small-caliber cartridge that was created by a Philippine company and is now popular among shooters, primarily in the United States. The patron was introduced to Europe in 2015 by the manufacturing company during the IWA OutdoorClassics exhibition held in Nuremberg. Thanks to this demonstration, ARMSCOR - Arms Corporation is trying to enter the European market, having interested the shooters of the Old World. In this case, the promoted cartridge is indeed an interesting novelty. .22 TCM is a relatively new 5,6-mm high-speed cartridge with a bottle sleeve, which is able to disperse a bullet weighing 2,6 gram to 640 speed m / s.


The headquarters of the company ARMSCOR - Arms Corporation is located in the city of Marikina in the Philippines. This is a well-known manufacturer of self-loading pistols, made by the famous Colt M1911. This gun was in service with the American army from 1911 to 1985 years and is allowed for use today. In many ways, this is the legendary model of small weapons. ARMSCOR sells some of its models "based on" M1911 in the United States and European countries under its own brand Rock Island Armory. Currently, these guns are recognized by experts of one of the best alternatives on the market. They compare favorably with Western standards of workmanship and good efficiency, while having a rather low price, especially in comparison with direct European or American competitors. 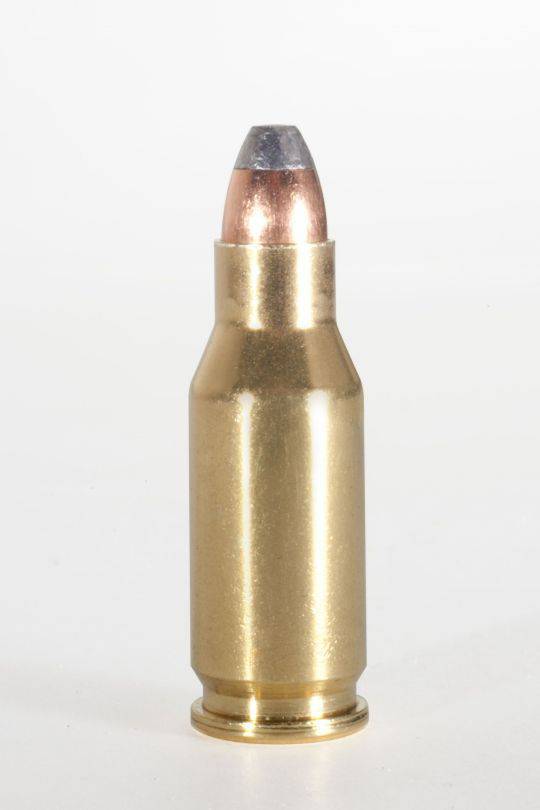 The proposed name for TCM ammunition stands for Tuason-Craig Micromagnum, the name comes from the name of today's CEO and President of ARMSCOR, as well as Tuason family heir Martin Tuason, and legendary modern American gunsmith Fred Craig ), which designed the .22 TCM caliber cartridge for AMRSCOR. Fred Craig worked for a long time as a chief designer at this Filipino firm. It is worth noting that it was the Tuason family that became the founders of the Arms Corporation in its current form. The new ammunition is compatible with the Rock Island Armory pistols manufactured by the company.

The .22 TCM cartridge is a central cartridge-mounted ammunition with a bottle sleeve, which at first glance can be confused with a reduced .223 / 5,56-mm, but in fact, the sleeves for the .22 TCM cartridges are made from cut-off and crimped sleeve 5,56X45mm cartridges. These sleeves are equipped with 0,61 grams of gunpowder and a bullet that has a mass of 2,6 grams. Today, this ammunition is available on the market in three versions: JSHP (Jacketed Soft Hollow Point) half-shell bullet, JHP (Jacketed Hollow Point) shell expansive bullet and sharp-nosed flat-bottomed PTFB (Pointed Tip Flat Base) bullet. The last all-shell sharp-nosed bullet makes this ammunition dangerous for some body armor. 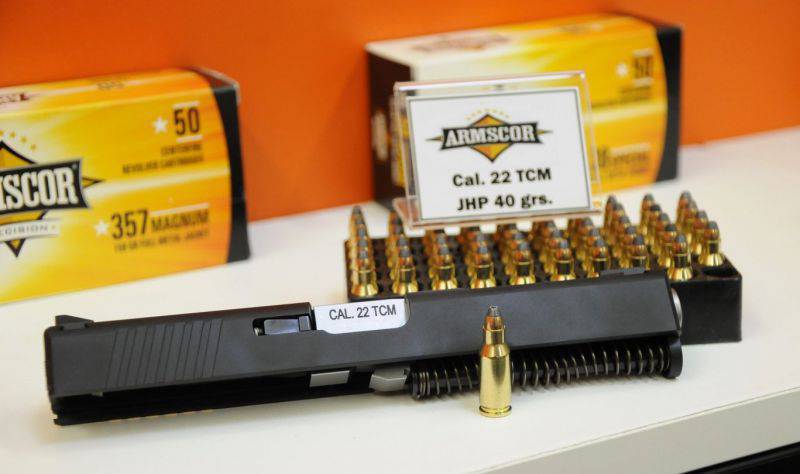 In 2015, the Philippine company ARMSCOR introduced a new version of the cartridge, which received the designation .22 TCM9R. Basically, this munition represents the standard .22 TCM, which was shortened to the total length of the standard 9x19mm cartridge, very common in the world, known as the Parabellum. This solution is intended to expand the possibilities of using high-speed cartridge. Now you can simply convert existing 9-mm firearms to the new .22 TCM9R cartridge with a conventional replacement of the return spring and barrel using standard magazines that are designed for 9-mm cartridges. Starting in the summer of 2016, ARMSCOR is going to start selling rework kits for using the .22 TCM9R caliber cartridge of the most popular Glock 22 and Glock 17 pistols.

In terms of efficiency, the Philippine .22 TCM and .22 TCM9R cartridges offer very high levels of initial bullet velocity (around 640 m / s), muzzle energy is 538 J, with an effective expansion of the expansive bullet when it hits a target. Currently, this ammunition is certified SAAMI, but in order to become commercially successful in Europe, it will need to be certified in accordance with the international standard CIP. Passing this certification is imperative. 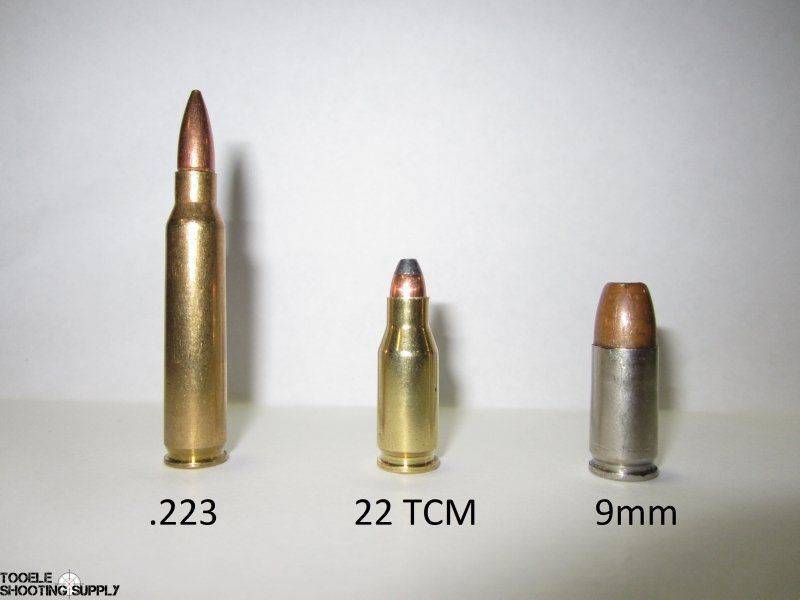 As far as can be judged today, the basis for the new Philippine project .22 TCM has become another cartridge, which was previously presented on behalf of Fred Craig - .22 Micro-mag. Today, the .22 TCM cartridge is positioned as a high-speed, low-pulse ammunition with a flat flight path, which can also be used in 9xXNNXX-mm weapons after a small remake and barrel replacement. At the same time, for example, in the Armscor 19А1911 two-row gun shop, 2 ammunition .18 TCM22R can fit. According to the developers themselves, the .9 TCM cartridge was designed specifically for use in short-barreled weapons, which makes it possible to more efficiently use the energy of powder gases, and, as a result, allows for a greater initial speed of the bullet than the well-known Belgian cartridge 22X5,7 provided application of the latter in the gun.

Unlike the regionally and conceptually close Indonesian patron 5,56х21, the Philippine patron .22 TCM does not try to put on shoulder straps. Currently, this munition is on the market of civilian weapons in the United States. Nothing is known about the development of any army-police weapon systems for it. At the current time, the .22 TCM cartridge is interesting, first of all, as the first powerful small-caliber cartridge of the central battlefield, which is intended for the civilian market of small arms, and not for law enforcement agencies. 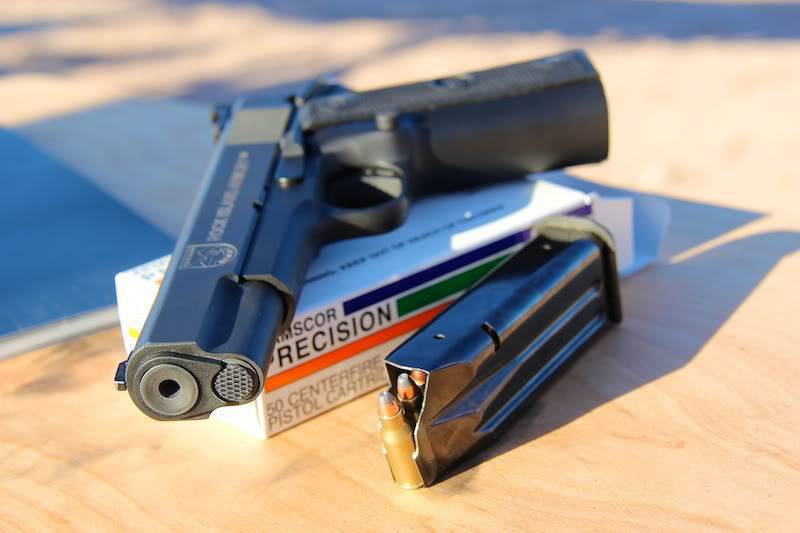 The outlook for the .22 TCM ammunition is still somewhat uncertain. On the one hand, the influx of pistols, released under the new cartridge, is not yet observed. On the other hand, in the conditions of a glut of the US small arms market, any more or less original novelty may turn out to be needed and fired. In addition, in contrast to the same cartridge 5,7х28, .22 TCM9R is offered for the Colt М1911 platform most in demand on the American market. In addition, the company is seriously looking to promote its new ammunition in the European market.

Speaking about the civilian prospects of new patrons, it is necessary to build on their price. It is the cost of ammunition will be crucial. The most obvious and main niche for this munition can be “plinking” - the general name for recreational shooting at various objects used as targets (bottles, beer cans, etc.). Plying is widespread in countries of the world that are distinguished for their high weapon culture and liberal weapon legislation. In addition, .22 TCM9R cartridges can be used for self-defense, especially if they are used in relatively compact pistols suitable for shooters who are sensitive to recoil.

We are in Yandex Zen
The main patron of the cold war
7,62 mm rifle and machine gun cartridges
12 comments
Information
Dear reader, to leave comments on the publication, you must to register.