October 11 2015
16
October 7th is the red day of the calendar. Is there a typo here? Many have forgotten about this holiday, although for more than ten years it was a non-working day. 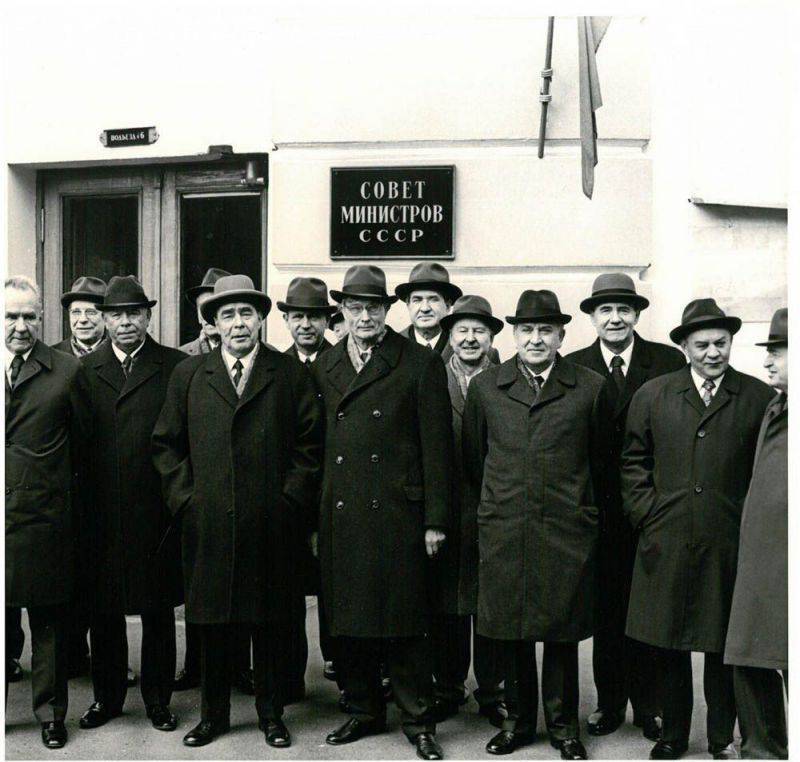 Leonid Brezhnev with members of the USSR Council of Ministers. 1970's
Constitution Day developed socialism. On the web, you can watch the releases of the 1977 Time program. Discussion of the Constitution, solemn gossip about it, finally, a triumphant vote in the Supreme Soviet of the USSR ... Short remarks of deputies. Mostly - workers and collective farmers, foremost. More - engineers, shepherds, officers. It seems to be accustomed to the reports and awards, but they say confused, confused, reciting. However, sincere smiles - with bare teeth exposed. Odezhka from people's choices is also quite ordinary, available to any production worker. Well, the deputies then brought relatively small privileges and travel allowances. And elected the real representatives of the majority. Of course, they (in many respects, like the present Duma members) did not have real power, only demonstrated decent scenery.

Among the elected representatives of the people we recognize representatives of the artistic intelligentsia. They are few, but they are striking. Happiness in the eyes of Donatas Banionis. Really sincere? Or masterfully plays the role? And here is Brezhnev! He is already ill, hardly keeps the correct intonation.

What a holiday without a song? The composers became generous, the singers did not disappoint. In these words - the official truth of the time, its showcase:
We got happiness not with the world on a string,

It is from Kuzbass, it is from Magnitka ...

We became stronger than we were yesterday.
The homeland of freedom is generous and kind.
In filial love we are tender and firm.
To love is to keep out of trouble.

Such was the spirit of the then good officialdom - “generous and kind.” We haven't had a better time since.

What is it: continuous window dressing or was there a reason for joy? Judge for yourself. Orthodox critics criticized the new Constitution for rejecting revolutionary ideas. It was a constitution of reconciliation. No dictatorship of the proletariat, henceforth, we have any social origin respected. But how else, if we are talking about the "scientific and technological revolution"? Soviet people received new rights: for example, the right to housing. For any society, this is an achievement. A previously uncharacteristic desire for Soviet civilization was recorded to preserve the cultural heritage, historical monuments. 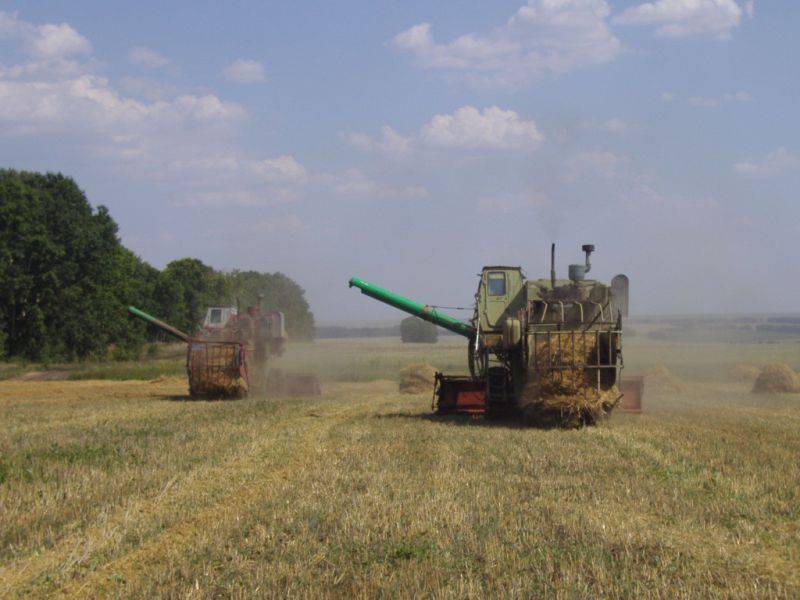 “Bread of the new harvest - in the bins of the Motherland!” - 1970's popular slogan
However, here are the key postulates, article 45.

“Citizens of the USSR have the right to education. This right is ensured by the free education of all types of education, the implementation of universal compulsory secondary education for young people, the wide development of vocational, secondary special and higher education on the basis of the connection of education with life, with production; development of correspondence and evening education; state scholarships and benefits for students and students, free issuance of school textbooks; opportunity to study at school in their native language; creating conditions for self-education ".

It was. And free books are also a reality. We have already lost the habit of such an order of things. I will note that here we are talking not just about the “universal average” - compulsory and indispensable, but also about free higher education. For such rights it makes sense to fight.

It will take another ten years, and hardly anyone will be able to appreciate the importance of educational guarantees. Because we are losing the basics of enlightenment, the basics ...
And we will recruit highly qualified specialists, as in the 77th century. Will you point me to the oases of enlightenment in our Babylon? There are, of course, all kinds of living corners today. Only in the twenty-first century there is a severe regularity: what does not exist in the mass dimension does not exist at all. The times of the Tsarskoye Selo Lyceum are over. We are attacking an armored personnel carrier with d'Artagnan's sword ... Only a first-class general education is of value in the struggle for the future. And the authors of the Constitution-25 thought much more soberly and far-sighted than the rulers of the last 45 years. Now statesmen, as something customary and legal, talk about the capital that every family needs to educate a child. And every year the study becomes more and more paid. The system for selecting talented students has shrunk. Barbarism takes the bastions of civilization. We would, admit, demanded the return of the XNUMXth article of that long-forgotten Constitution. You cannot give up such bastions.

Many of the then Soviet developments are now perceived as belonging to the Western world. First of all, these are the two whales of our time - tolerance and political correctness. They did not know such words in the USSR, but the principles were worked out precisely here, on the Old Square and in the Kremlin, of course, taking into account our realities. The current post-Soviet independent states have retired from the Brezhnev Constitution much further than the modern United States, Sweden or France. We (not only in Russia - in all the former republics of the USSR without exception!) Are taken to flaunt political politeness, to demonstrate the intellectual equipment of the nostalgic Middle Ages.

The most controversial knot of the Constitution-77 is the 6 article, which was fiercely argued in 1989 – 1990, at the suicidal stage of “perestroika”.

“The leading and guiding force of the Soviet society, the core of its political system, state and public organizations is the Communist Party of the Soviet Union. The CPSU exists for the people and serves the people. ”

It seems to be a dictatorship. Even in the Stalinist Constitution, the power of the party - the only one in the whole country - was not proclaimed so categorically. Under the conditions of a one-party CPSU system, the party has become a kind of open class. Perhaps the emperor Peter dreamed of something like this, creating a Table of Ranks. The party vertical remains the most successful - effective and disciplined - control system in our space. In the spring of 1990, Gorbachev agreed to abolish the 6 article, and in fact took power from the party organs back in 1989. And in two years, crime has sharply increased in the country, bloody interethnic feuds unfold, and the national debt has increased several times. Curious. 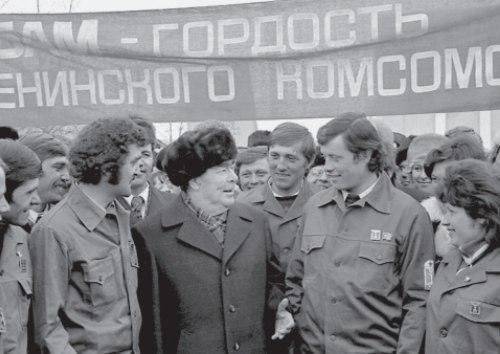 Leonid Brezhnev among the builders of the Baikal-Amur Railway. 1978 year
The Basic Law dealt with faith.

“Citizens of the USSR are guaranteed freedom of conscience, that is, the right to profess any religion or not to profess any religion, to send religious worship or to conduct atheistic propaganda. The incitement of hostility and hatred in connection with religious beliefs is prohibited. The church in the USSR is separated from the state and the school is separated from the church. ”

What is remarkable here? First of all, the very recognition that in 60 years after the October Revolution in the USSR there are believers. And their rights are reserved. The peaceful transition to universal atheism did not take place. Violent all the more. The anti-religious fervor to the 1977 was pougas, although, of course, the state machine worked to educate atheists. 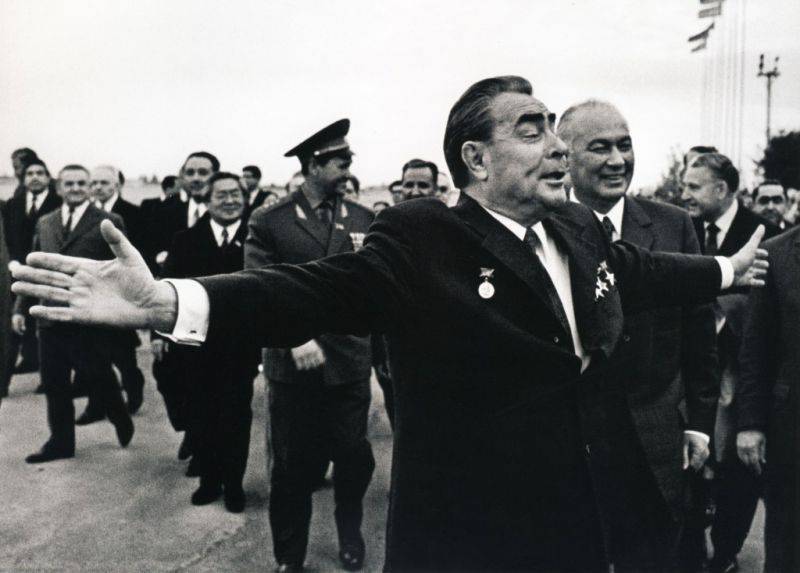 Leonid Ilyich liked to welcome guests and did it with all the breadth of the Russian soul
The constitution of 1977 is not perfect, but in many respects optimal. And, most importantly, it has the potential for peaceful development with the gradual improvement of social and economic life. In all former republics of the USSR, legislation has changed dramatically since 1991. At first glance, and new laws look decent. Although, if you look, the values ​​have changed, and it is not by chance that we all live in an atmosphere of endless strife.
The era of peaceful labor did not last long. Only two years later, the USSR entered the Afghan war. They had to fight with forces that seemed to be far from the ideals of the Western democracies, and our politicians clearly underestimated the US reaction to the events in Afghanistan. American diplomacy worked vigorously, and business supported the Carter administration in the fight against the "Soviet threat." The last peak of the “cold war” began, which can be crossed only by one of the two superpowers of the 20th century. It was a fatal mistake: detente ended, developed socialism dissipated. Ideologists began a dangerous game of raising rates, which always means the triumph of radicalism over common sense. But the Constitution of 1977 remained as a monument to vegetarian times, about which, as was sung in those times, it is impossible to "think down". We have something to learn from that Basic Law.

Ctrl Enter
Noticed a mistake Highlight text and press. Ctrl + Enter
We are
He defended his guardsService history "Admiral Lazarev" - "Red Caucasus"
16 comments
Information
Dear reader, to leave comments on the publication, you must to register.