“If Moscow wants to defeat ISIS in the north of Syria, then Kurds are necessary for it” 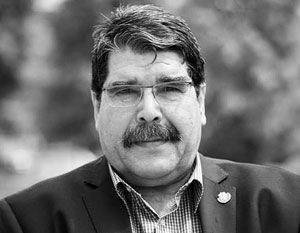 “Of course, we have a positive attitude towards the revitalization of Russia in the fight against the IG. On the other hand, Moscow supports the Syrian regime, which we oppose. But we will support any country fighting against the “Islamic State,” said the leader of Syrian Kurdistan Saleh Muslim, whose troops are currently fighting against ISIS in northern Syria, in an interview with the VIEW newspaper.


Currently, there are many separate groups fighting in Syria that have different goals and objectives. One of the largest groups is the Kurds, who are fighting against the radicals from the first day of the emergence of the IG terrorist organization on the territory of Iraq and Syria.

Most Syrian Kurds are critical of the government of Bashar Assad in Damascus. However, the threat from radical terrorist organizations, primarily the so-called Islamic state, is more relevant for the Kurds. IG militants sell Kurdish women and children to sexual slavery and carry out ethnic cleansing of towns and villages inhabited by Kurds. Among the Kurds there are Sunni Muslims (constitute the majority), Shiite Muslims, Yezidis and Christians.

The leader of Syrian Kurdistan, the chairman of the largest pro-Kurdish opposition party “Democratic Union” Saleh Muslim explained to the newspaper VIEW the position of the Syrian Kurds at the start of the antiterrorist operation of the Russian Armed Forces. Among the representatives of the forces of moderate opposition, Saleh Muslim is the most influential figure. The armed forces under his command number around 40 – 50 thousands of people and fight with the IG terrorists in the north and north-east of Syria.

VIEW: Mr. Muslim, on September 30, the Russian Armed Forces launched an air force operation against the IS and other terrorist groups. How in Syrian Kurdistan rate this step?

Saleh Muslim: Russia from the very beginning of the Syrian conflict was involved in supporting the government of Bashar Assad. Moscow supports the Syrian people in the war against the terrorists of the Islamic State and its sisters. Now this support has expanded, for us it is not news.

Of course, we have a positive attitude towards the revitalization of Russia in the struggle against the IS. On the other hand, Moscow supports the Syrian regime, which we oppose. But we will support any country fighting against the IG.

We, as a Syrian opposition group, regard the activation of Russian policy in Syria as a struggle against terrorism. I do not know how these attacks are viewed by other opposition groups that are completely dependent on Turkey and other countries financially, ideologically and practically. We do not receive any instructions. We have a different political line. The Kurds are fighting against the IG terrorists from the very beginning of the conflict in Syria. Naturally, we will support all who fight against the IS.

On the other hand, we hope that Russia's actions against terrorists will help to begin political changes in Syria as soon as possible. The crisis in Syria needs a political solution; it cannot be mastered by military methods alone. In order to preserve Syria as a state, political reforms are needed.

VIEW: It is known that in Syria on the side of the state are fighting other military-political forces. Are Syrian Kurds coordinating with them?

SM: The Kurds do not coordinate actions with any of these forces. We are not in contact with the government of Bashar al-Assad, with Hezbollah, or with the Iranian police. We are far from them, we are not allies and not enemies, we do not have common points of contact on earth. We consider all these groups as part of the regime, and we are against the Syrian regime.

VIEW: Do you think that Bashar Assad should leave?

S. M: During a certain transitional period, during negotiations on the political transformation of Syria, it may remain. I am sure that we need some kind of government for this period in order to somehow govern the country.

Moscow needs to more clearly explain its policy to regional political forces. The United States began to bomb the IG, and we still don’t really know what they want. Many countries that take part in a coalition against terrorists led by the United States create the appearance of fighting terrorists - for example, Turkey does this.

Now Russia is bombing the IG. Let's hope that everything will be successful. We are ready to cooperate with any party that is fighting against the IS and other terrorist groups.

VIEW: On the eve of the start of the operation, the Syrian Kurds had contacts with the Russian Armed Forces?

SM: We did not have contacts with the Russians on the eve of the operation against the IS. Moscow is coordinated with the Assad government, not with us. There was an official request from Damascus, Moscow fulfills it. The fact is that all the forces that are fighting against the IS, do it in different regions of the country, on different fronts.

Government forces do it conditionally in the west of Syria, the Kurds in the north. Russia is limited to air strikes. We are fighting along the entire northern border of Syria with Turkey, in the province of Hasaka. There may be some coordination between us in the future, but as long as it is not there, it is not even necessary.

If Moscow wants to defeat the IG in the north of Syria, then the Kurds are necessary for it. For our part, we expect support and assistance in the fight against IS.

VIEW: In your opinion, is the decentralization of Syria and the granting of independence to Syrian Kurdistan necessary?

SM: We have always seen our future in the framework of a single democratic Syrian state. As Syrian Kurds, we want to be part of Syria - this is our goal and our project for the future. Southern Kurdistan or Rozhava never fought and did not fight for independence from Syria. We fought for the democratic rights of the Kurdish people. We see ourselves as a component of a democratic Syrian state together with Arabs, Turkmen and other residents of this country, if our rights are respected.

VIEW: Do the Kurds of Syria have any arrangements with Bashar Assad? For example, some media outlets cite such a scheme: are you fighting together with the IS and other terrorist organizations, after which Damascus will give the Kurds wide autonomy?

SM: Bashar Assad's regime is the Baathist regime, and we know what it is. And before the appearance of the IG, Damascus never cared about the Kurds of Syria. We do not trust them. We have good relations with Russia, Damascus too.
Moscow could be useful in the political settlement of Syria in the future. For the past two years, we have been fighting the militants of the IG, Dzhebhat an-Nusra and a number of other radical groups. In this regard, and with the situation in Syria as a whole, we have created a model of democratic self-government in the territory of Rozhava and are protecting ourselves from IS and other terrorists.

Recall, October 1, Russian Foreign Minister Sergei Lavrov said that the Kurds are represented in the information center to coordinate the fight against the terrorist group IG in Baghdad. Moreover, Russia provides them weapons through the government of Iraq.

“We supply weapons to the Kurds through the Iraqi government. The information center established in Baghdad includes representatives from Syria, Iraq, Iran and Russia. Kurdish autonomy is also represented there, ”Lavrov said. The Russian Foreign Minister pointed out the importance of the work of this information center. “The efforts to counteract terrorism make it more effective,” he added.

The information center in Baghdad was established by Russia, Iraq, Iran and Syria on September 26. The main function of the center will be the collection, processing, compilation and analysis of current information about the situation in the Middle East region in the context of fighting the IG, its distribution according to its purpose and prompt transfer to the general headquarters of these countries.

Ctrl Enter
Noticed a mistake Highlight text and press. Ctrl + Enter
We are
The role and importance of Kurds in the geopolitics of the Middle EastKurdish question in modern Syria
55 comments
Ad