October 9 2015
45
The exhibition "Innovation Day of the Southern Military District" was shown a large number of different armored vehicles. In the pavilion of the exhibition everyone could get acquainted with the KamAZ-43269 “Shot” armored car. This machine is not new and has long been known to the general public, but still attracts the attention of fans of technology. During the recent exhibition, “Shot” was available for inspection outside and inside.


The development of a promising protected car began in the second half of the nineties. The project was created by specialists of the organization “Special Engineering” at the Moscow State Technical University. Bauman with the participation of employees of the Kama Automobile Plant. Initially the car was designated as BPM-97. In the future, financial and other problems led to the fact that the only developer of the project was the KamAZ plant. After some noticeable improvements, the car received a factory index and a new name - KamAZ-43269 “Shot”. It was with this name that the armored vehicle became widely known.

In the current version, the armored vehicle “Shot” is a multipurpose vehicle designed for the transport of personnel and cargo. If necessary, the armored car can be equipped with special equipment, including combat modules of various types. In this case, the machine can carry machine guns or other weapons. It was assumed that such features of the project will provide greater flexibility of application and will make the armored car interesting for potential customers. 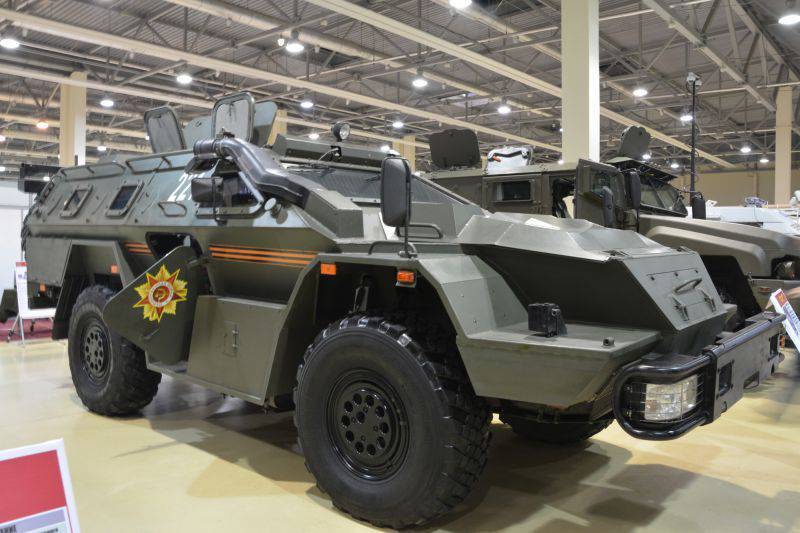 The KAMAZ-43269 armored vehicle is built on the basis of the KAMAZ-4326 all-wheel drive two-axle chassis. The base car shared with the armored car a number of components and assemblies of the chassis and chassis. The armored car has a KAMAZ-740.31-260 diesel engine with 260 horsepower. There is a manual transmission that distributes torque to all four wheels. The chassis has an independent spring suspension on all four wheels.

With a curb weight of 10,86 and an armored vehicle, the “Shot” can carry loads or people with a total weight of up to 1040 kg. It is also possible to tow an 5-ton trailer. When driving on a highway, the car accelerates to 90 km / h.

The KamAZ-43269 vehicle has an armored hull that provides protection for the crew and units from small-arms bullets. weapons and fragments of explosive devices. The housing is a characteristic angular shape divided into the engine compartment and the habitable compartment. The forehead and upper parts of the armored case withstand the hit of bullets of caliber 12,7 mm. The lower parts of the sides and feed provide protection against 7,62-mm bullets. Armored bottom protects the car from explosive devices.

The crew consists of one or two people, located in front of the habitable compartment. Along the hull sides are installed seats for eight paratroopers. The landing is located at the sides, facing each other.

The crew and assault forces of the vehicle can monitor the situation with the help of a large inclined windshield and small windows in the sides and stern doors. For landing and disembarking it is proposed to use two side doors, the driver and behind the commander, as well as two stern doors. In addition, there are several hatches in the roof of the hull. A curious, but ambiguous feature of the project is the design of on-board hatches. The openings of these hatches are completely located in the lower side sheets, which, to a certain extent, complicates their use.

Armored "Shot" can be equipped with weapons of various types, which is proposed to be installed on the roof. In addition, there are loopholes with flaps. These devices, located in the sides between the windows, should be used for firing from the crew’s personal weapons and assault forces.

A prototype model of an armored car BPM-97 was first shown in 1999 year. In the future, due to the economic problems in the country, the machine could not find a customer for a long time. To date, about one hundred and fifty serial "Shots" have been built, transferred to various customers, both Russian and foreign. In particular, such equipment is used by strategic missile forces units responsible for protecting bases and mobile missile systems on patrol routes. A few years ago, the project of the new armored car “Bulat” was presented, the design of which uses some of the best practices on the Vystrel car.

One of the serial KamAZ-43269 armored vehicles, the Vystrel, was recently attracted to participate in the exhibition “Innovation Day of the Southern Military District”. We present a photoreview of this armored car. 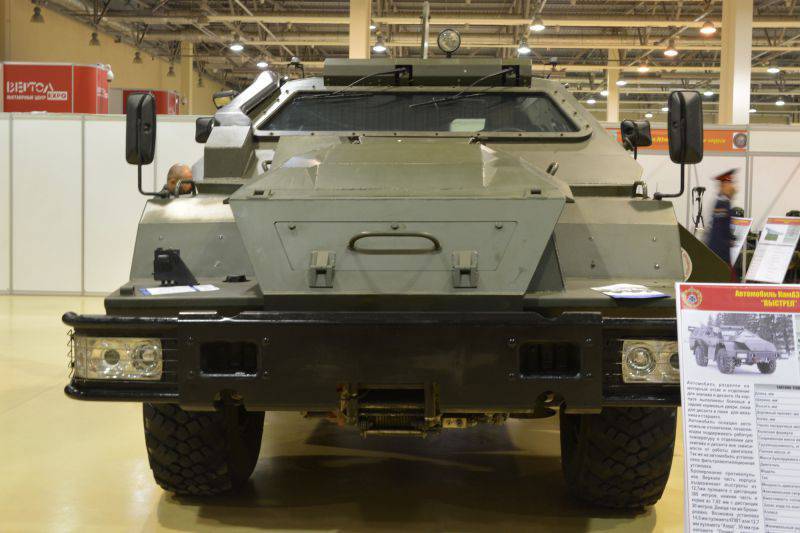 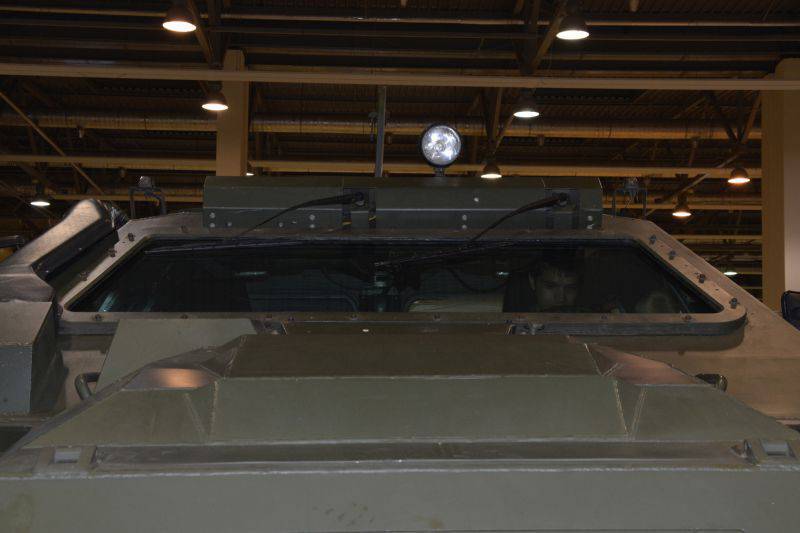 The windshield is located with a large slope 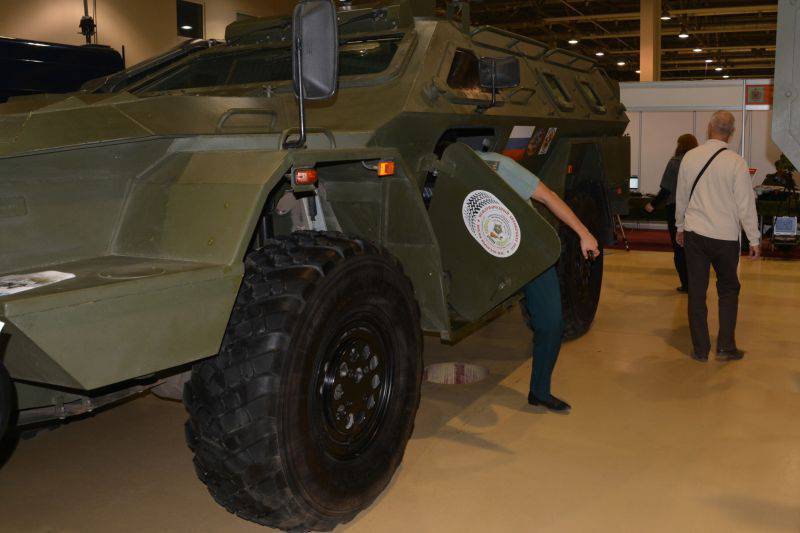 Certain skill is required to use side doors. 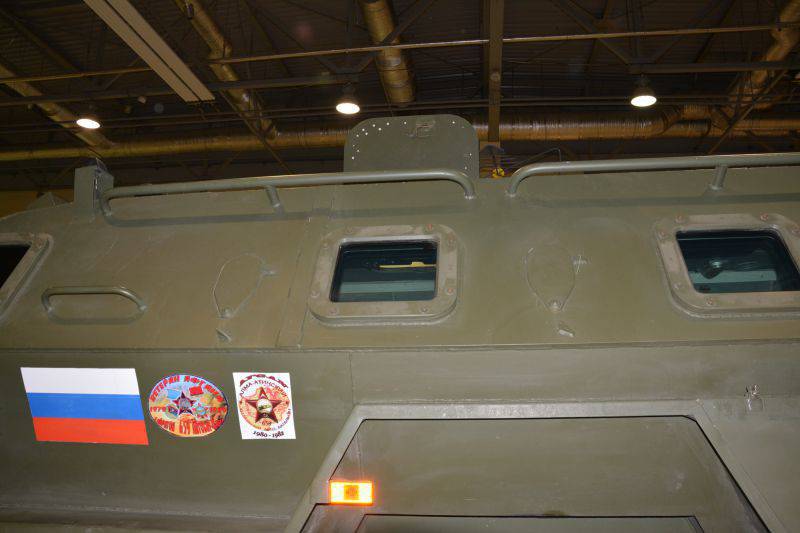 Left side. Visible are the windows and embrasures of the troop compartment. 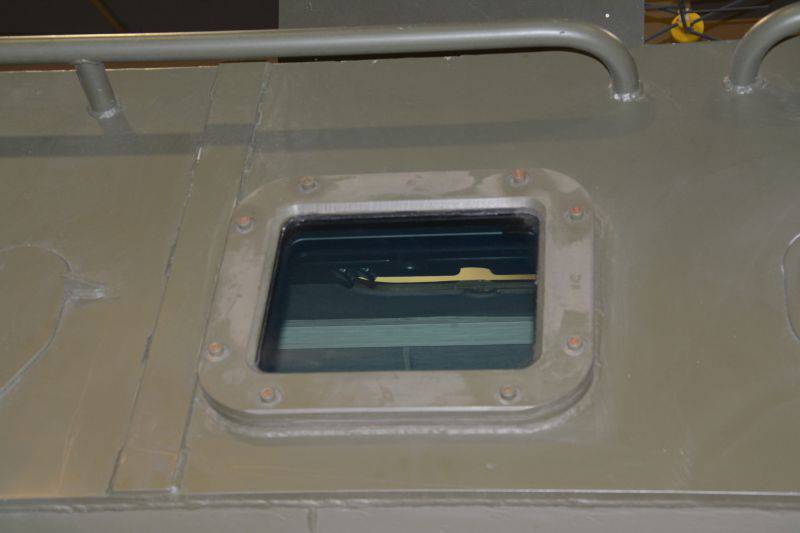 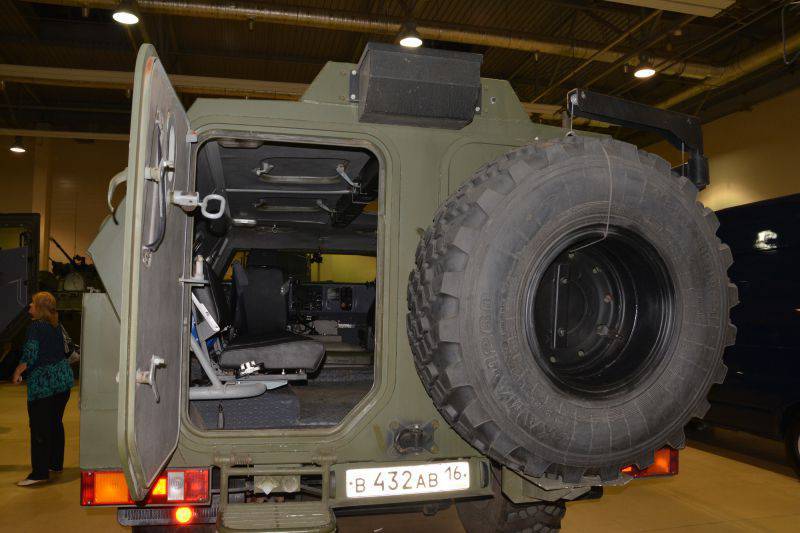 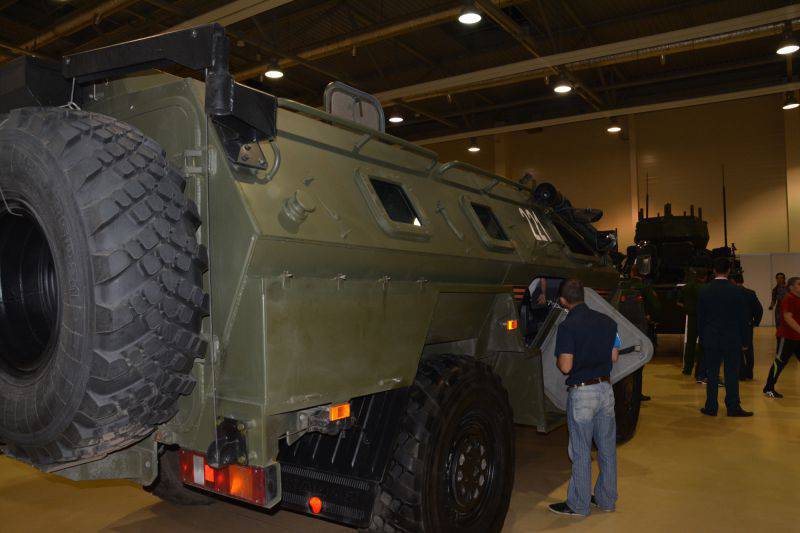 Starboard. The feed box for the property and the side door are visible. 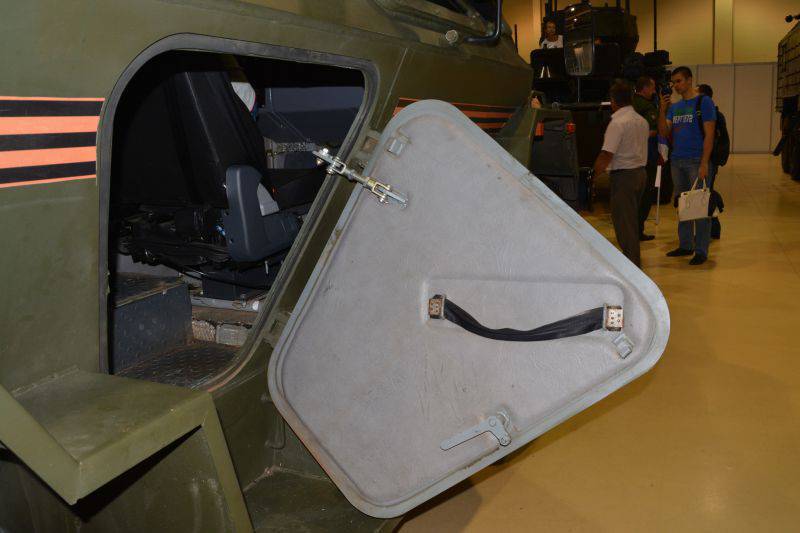 Right door, located behind the commander. She must use the landing 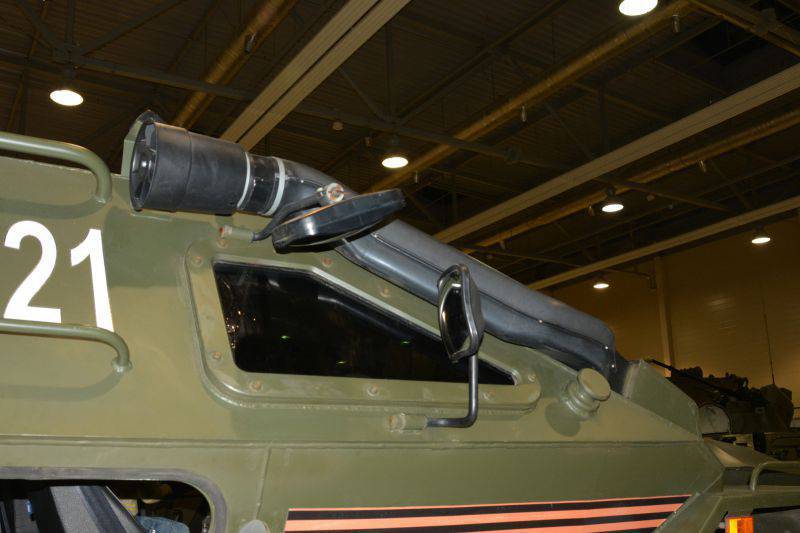 Commander side glass and engine snorkel 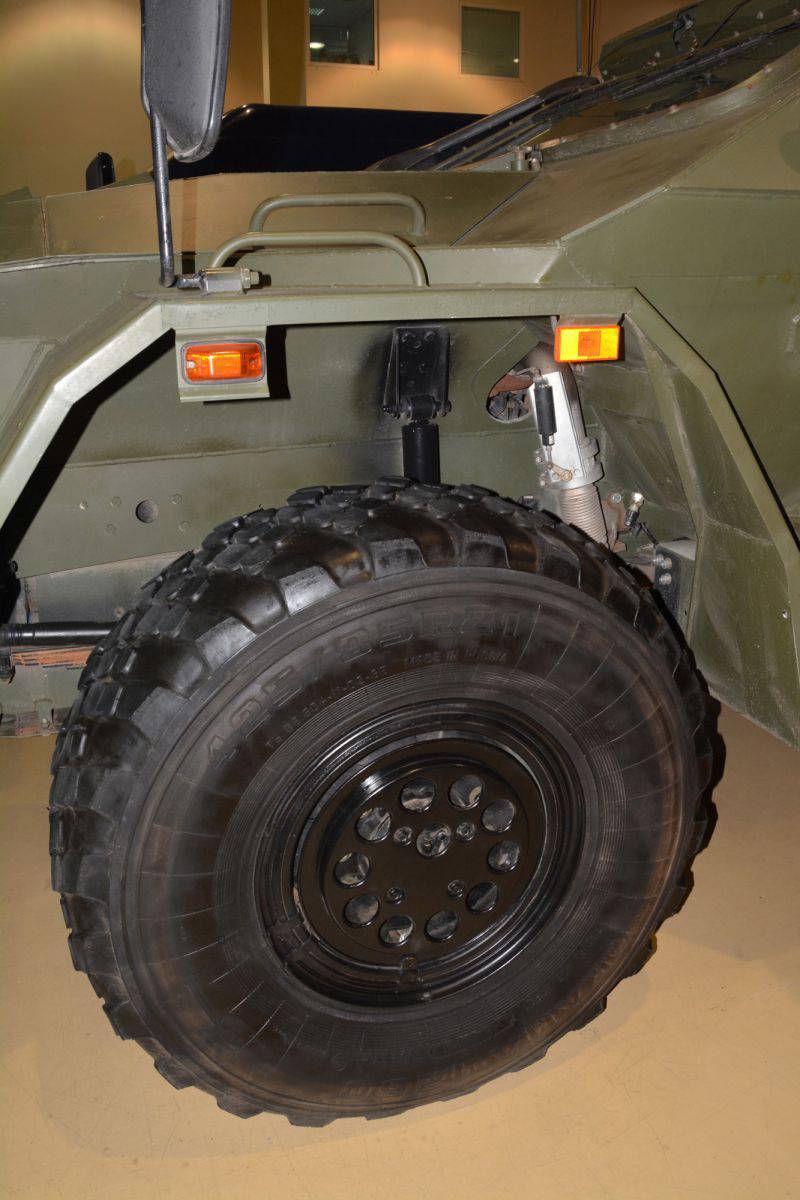 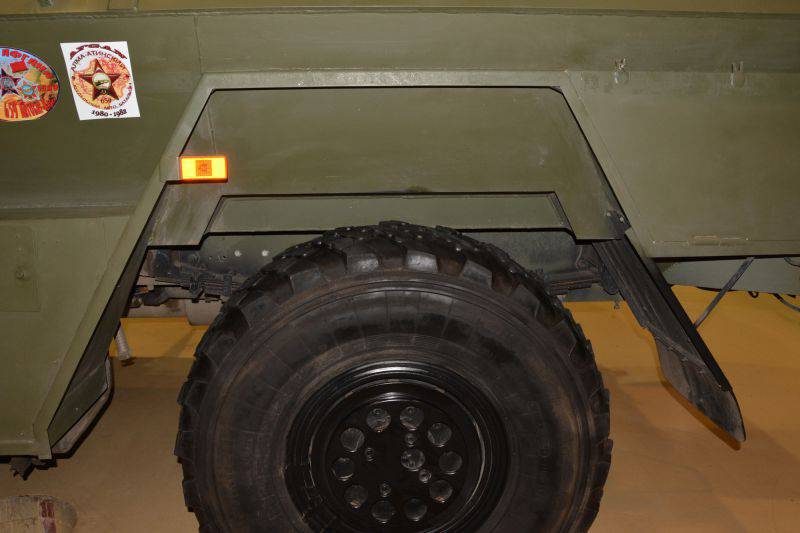 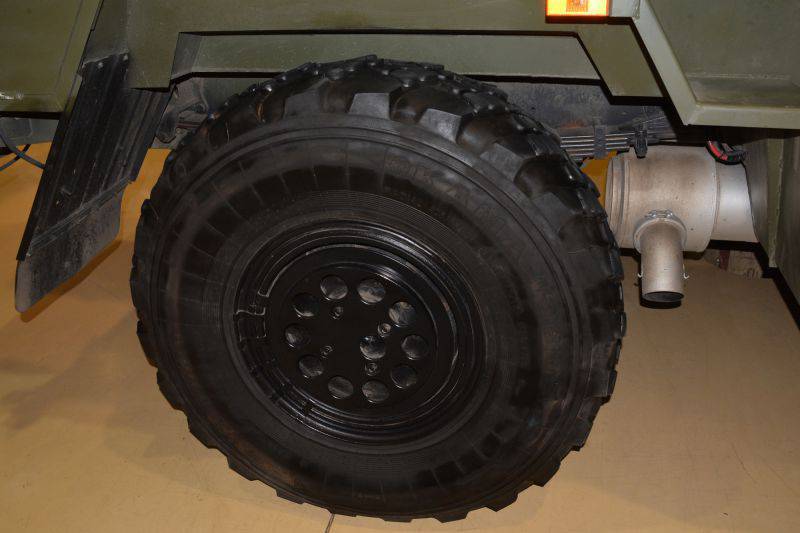 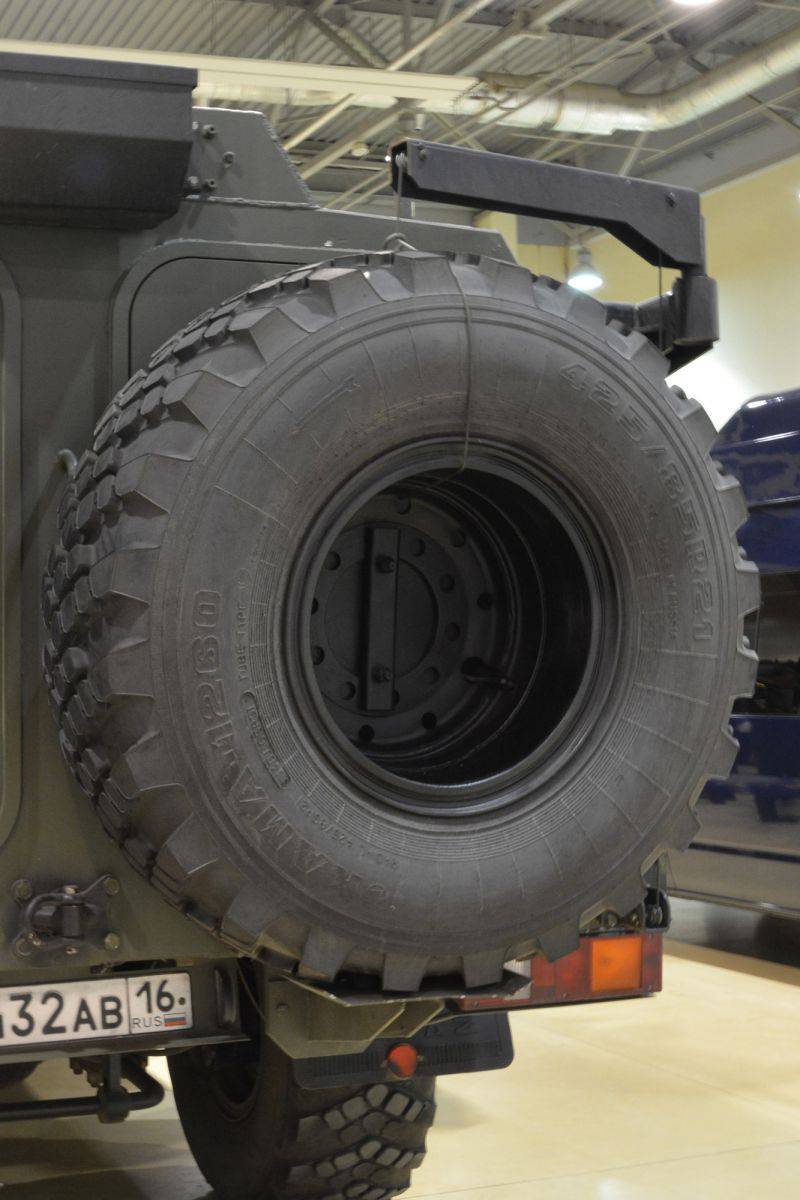 Large and heavy spare wheel is proposed to lower to the ground with a special boom. It should be noted that in this position the "reserve" overlaps one of the stern doors. 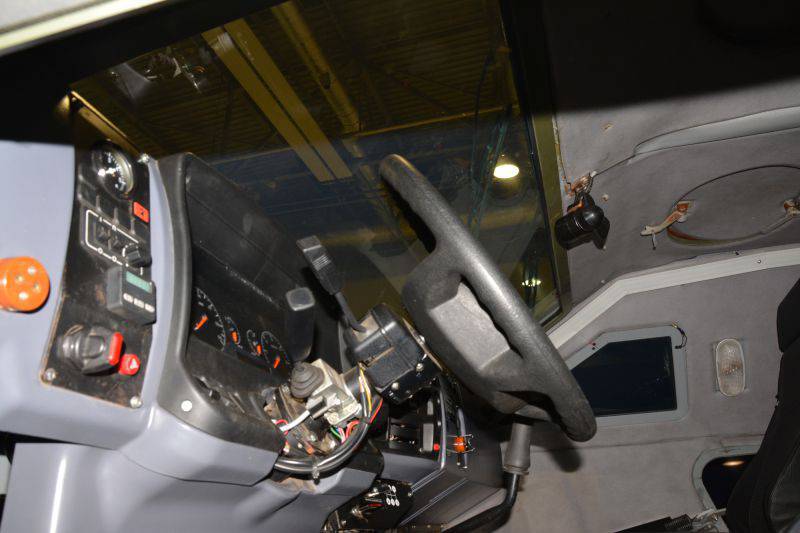 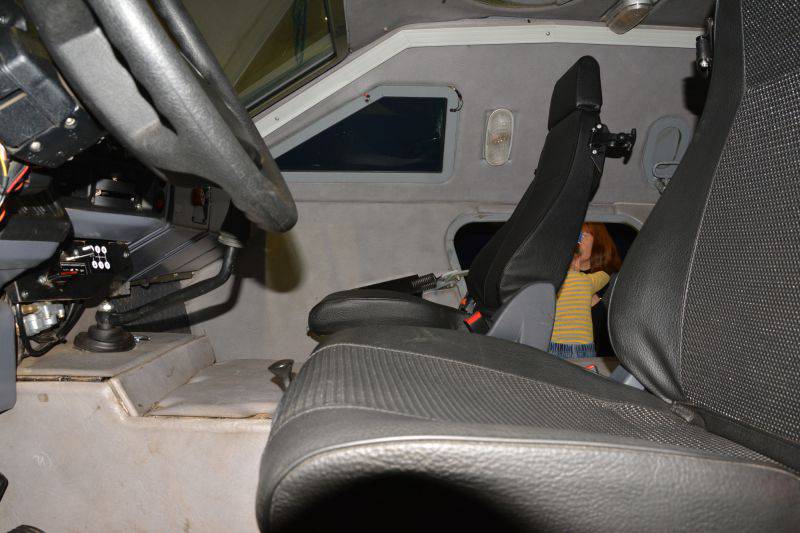 Crew seats, view from the left side hatch 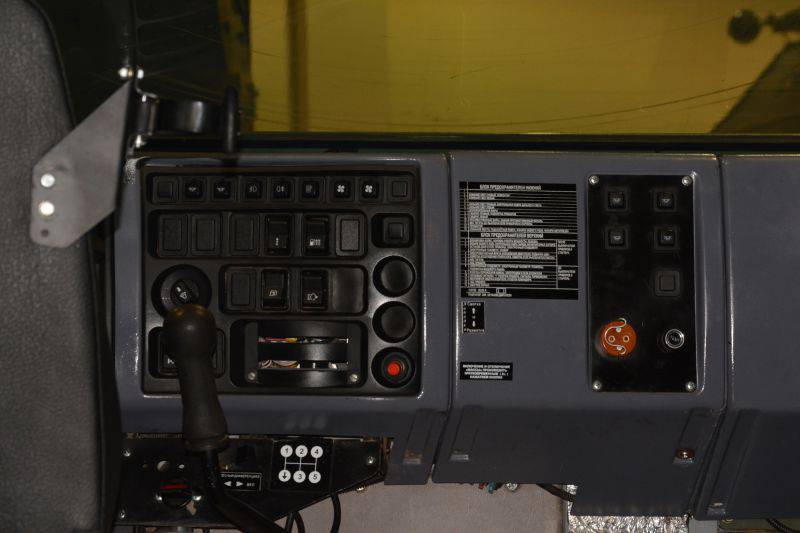 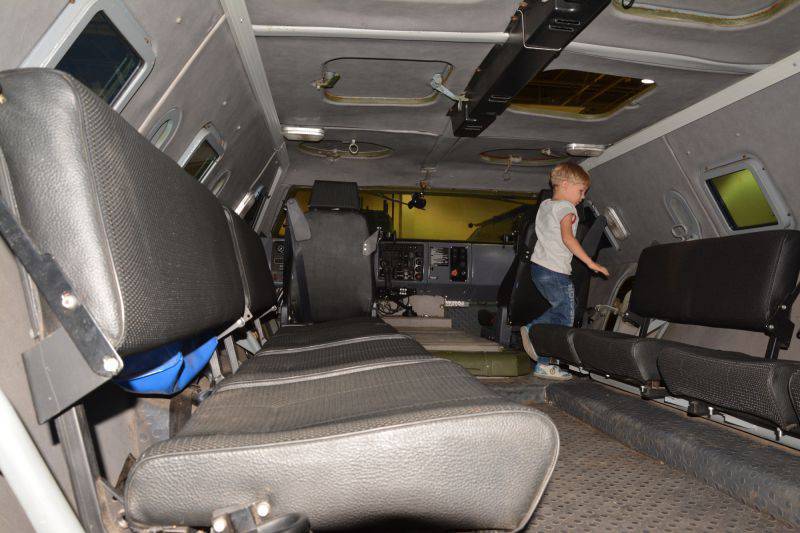 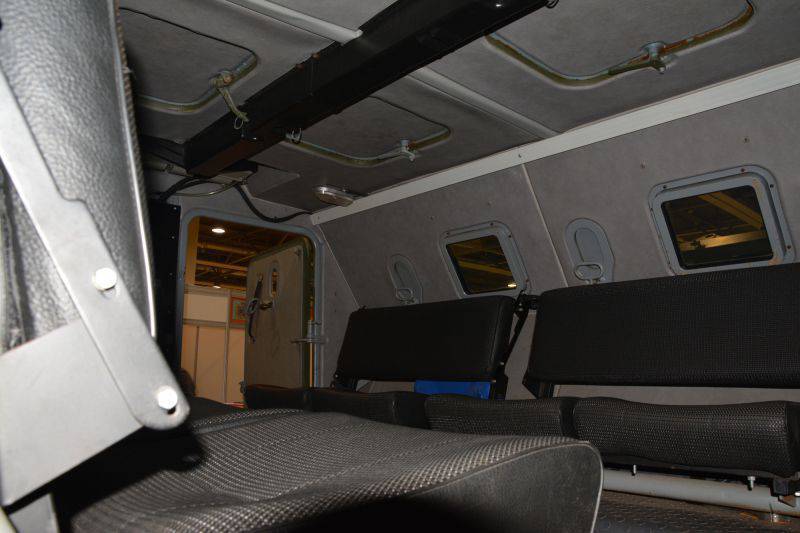 Troop compartment, view from the right side hatch 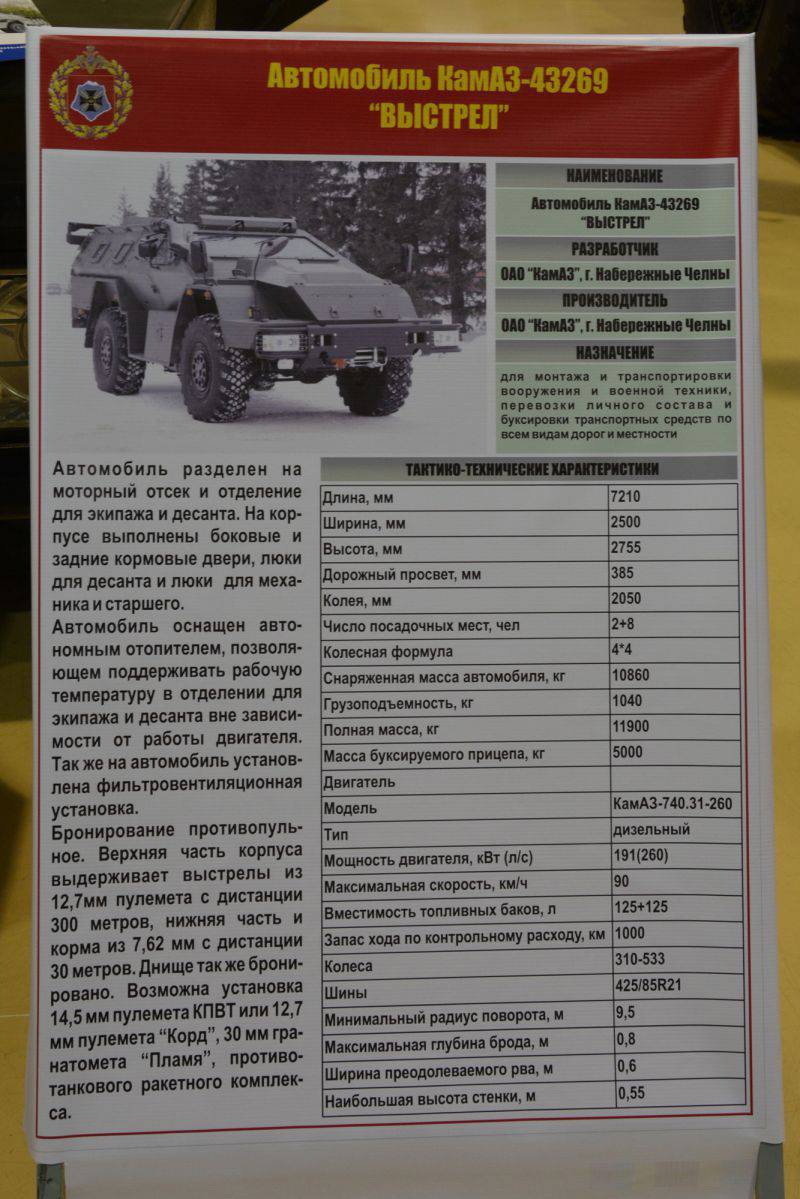