October 9 2015
29
In the United Nations refugee agency, trolls are working on mega levels. Thus, a representative of the agency Bais Wak-Voya stated that today, “to different countries of the world”, when working with migrants, it is necessary to take into account Russia's positive experience in accepting and integrating refugees from the territory of Ukraine. According to the UN official, Russia received about a million Ukrainian refugees, while the vast majority of them received state guarantees, found work and shelter in Russia.


Wak-Voyu quotes RIA News:
They (refugees from Ukraine) were given the right to work (in Russia), they found it and live. The Russian government is very helpful.

Obviously, referring to "different countries of the world", Vac-Voya primarily implies the countries of the European Union, where hundreds of thousands of migrants from North Africa and the Middle East continue to flock. What is trolling (if, of course, the representative of the UN agency himself is aware of the real implication of his appeal to "different countries of the world")? And the fact that comparing a million Ukrainian refugees in Russia with the same million (so far) Libyan, Syrian, Eritrean, Somali, Afghan, Yemeni and other refugees in Europe is something from the category “you can’t think of on purpose” ... they still do not understand that Ukrainians and Russians, in fact, are two branches of a single ethnos, and therefore the integration of Ukrainian (Russian from Ukraine) refugees in the Russian Federation is not the same as the “integration” of Ethiopian migrants in the FRG, or the UN agency simply deliberately drips with melted wax (or lead m?) on the pampered body of the European Union ... Like, and why are you there in your Europe wailing everything - take an example from Russia - open the doors, accept people, provide work, housing, social guarantees - everything and "business" ...

Moreover, the Ukrainian refugees, seeing the relative normalization of the situation in the Donbass, are returning to their homes in order to begin rebuilding their life, destroyed by the civil war. But are Arabs and other “guests” ready to return from Germany, Austria or Sweden, even if peace comes to their homes sooner or later? - Big question. Have you traveled? 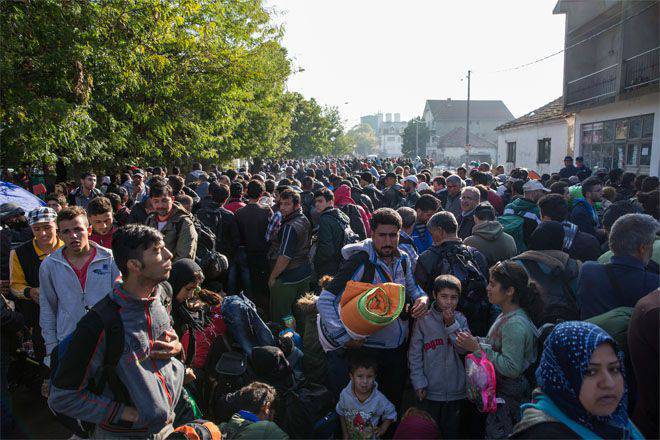 Meanwhile, in Europe (and not only) a frankly anti-immigration campaign is gaining momentum. If the refugees of the first wave of the EU (at least, Germany) received with open arms and cheers “Welcome!”, Now the situation has changed almost diametrically opposite. Informational reports of European newspapers look like a collection of reports from the front or sketches of criminal TV:

Refugees blocked the movement of trains under the Channel Tunnel. The police used special means to disperse the crowd.

In Germany, refugees raped a woman, staged a fight with the police.

On the border with Hungary, refugees throw stones at the police, hiding behind children.

Refugees are blocking checkpoints in Croatia, protesting against the fact that they do not pass through Slovenia to Austria.

In Germany, about a hundred refugees fought for food.

Refugees staged a mass brawl in the German city of Calden. Dozens of injured were taken to the nearest hospital.

And this is a more comprehensive summary of the German Calden (with a population of about 7,5 thousand people in the city at the moment there are about 2,5 thousand refugees):

An 19-year-old native of Albania (and Albanian migrants are also rushing to Germany, although Albania itself is in NATO and is on the path to EU membership) squeezed closer to the top of the line for free products. At that moment, an older refugee from Pakistan attempted to stop him. A young Albanian pounced on a Pakistani. The clash turned into a real slaughter with a knife fight, which was attended by about three hundred people. Fifty law enforcement officers were not enough to disperse the crowd; reinforcements had to be called in from the neighboring municipalities of the federal state of Hesse. Twenty ambulances were used to transport the wounded to hospitals.

The anti-immigration campaign is now reduced not only to the performances of the far right, but also to the appearance of artistic images. So, the Japanese artist Toshiko Hasumi published in Facebook a picture devoted to the subject of refugees, which is signed as follows (quote "Russian service BBC"):

I want to live in safety and purity, eat delicacies, hang out, wear beautiful things and live a luxurious life (...) At the expense of someone else. I have an idea. I will become a refugee. 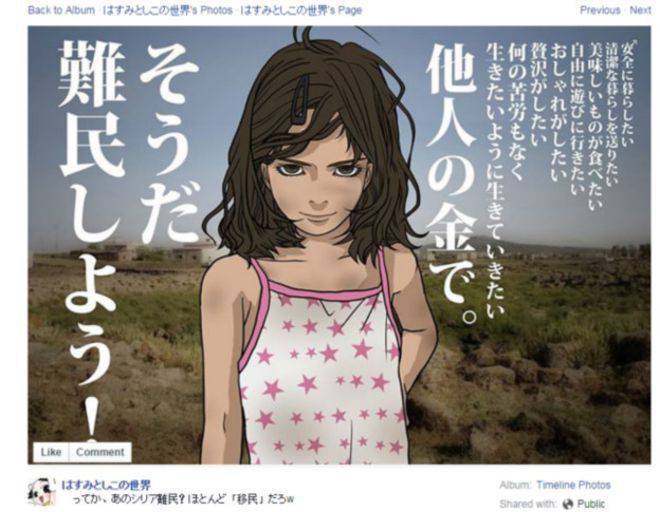 Most of the refugees, rushing to Europe and other countries of the world from the Middle East, Hasumi called "fake" - "fake".

Toshiko Hasumi:
I do not deny that there are real, really unfortunate refugees. I only reject those "fake refugees" who pretend to be victims and act for mercenary purposes, exploiting media attention to these poor refugees.

But the countries of the "victorious democracy" find it increasingly difficult to restrain emotions and appear sensual and benevolent in relation to the "aliens". So, for the first time in the European Union they started talking about the problem-solving by force. In Brussels, said that in the near future about 150 thousands of illegal immigrants can be deported from EU countries. At the same time, no European politician has yet explained: deported how and where? For such a massive deportation to the European Union, whether it wants to or not, it will be necessary to use force - the army, which will automatically lead to the most real hostilities on the continent. Migrants arrive in hundreds of thousands to Europe not at all to take and go back without a fight ... Considering that the majority of refugees are young strong men - and for weapon they, too, presumably, are ready to take. Where did they get the weapons from? Well, the money for taxis and casinos (Europress reports and statements by EU ministers) is ... And to take away? ..

In the end, Europe is hardly fully aware of what a crowd of far from friendly young people (with mobile phones with Internet access) and a great desire for European bloodletting, a crowd that can be coordinated from one center, capable of use the ideology you need. Europe has become accustomed to contemplating "Facebook" revolutions purely through television receivers, but it is in no way ready for the fact that perhaps a similar "revolution" with all the consequences will have to be seen from the window of your own house ...

Ctrl Enter
Noticed oshЫbku Highlight text and press. Ctrl + Enter
We are
"Trouble" of the Promised Land. African immigration to IsraelCo-organizer of the Kiev exhibition with "evidence of aggression of the Russian army" - a mega-level troll?
Military Reviewin Yandex News
Military Reviewin Google News
29 comments
Information
Dear reader, to leave comments on the publication, you must to register.