October 8 2015
36
In the Pochepsky district (Bryansk region), the destruction of Russia's largest arsenal of chemical weapons has been completed, reports Look With reference to the Federal Office for the Safe Destruction and Storage of Chemical weapons. 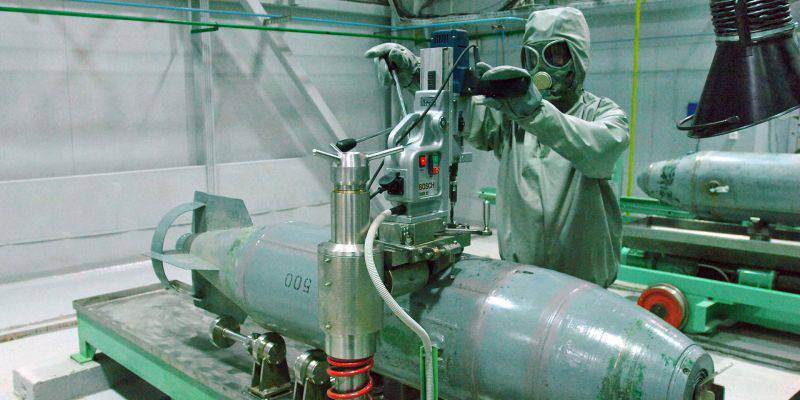 “Today (October 8) a solemn event will be held at the Pochep chemical weapons storage and disposal facility in the Bryansk region to mark the complete completion of the destruction of chemical weapons,” the release said.

"Last aviation the bomb was destroyed at the facility on September 26th. In total, since the plant began operating in 2010 at the Pochep facility, more than 67 thousand chemical aviation ammunition containing nearly 7,5 thousand tons of toxic substances such as sarin, soman and Vi-ex substances has been neutralized »- told the press service.

It is noted that "in the Pochepsky district social infrastructure facilities were built for 1,6 billion rubles, thousands of jobs were created by 2."

Decontamination of factory equipment and rehabilitation of the land on which the ammunition was stored will take place in the near future. Then, the issue of reprofiling the industrial site for civilian production will be decided.

According to the department, "by October of this year, 92% of the available reserves of chemical warfare agents had been destroyed in Russia." Next year, the destruction of chemical weapons will continue at the Kizner facility in Udmurtia. This is the last such enterprise in the Russian Federation.