In the footsteps of Gorbachev and Obama?

October 9 2015
40
Not so long ago, we assumed on the “Military Review” that Angela Merkel, through her peacekeeping efforts (it was about Ukraine and Angels' visit to the earthly ruler Obama), seeks to secure a worthy crown for a political career - to receive the Nobel Peace Prize. This summer and in September, Angela became famous for her desire (given out for Germany’s desire) to place as many refugees as possible in her homeland and allocate as much money as possible to them - not six billion euros, but all ten. Angela, who cares about refugees and opposes Kiev’s armament to the West, becomes like a real angel. But how not ironic, this award it deserves much more than Gorbachev, in which interethnic conflicts began in the USSR, or the evil hegemon and Libyan interventionist Obama. 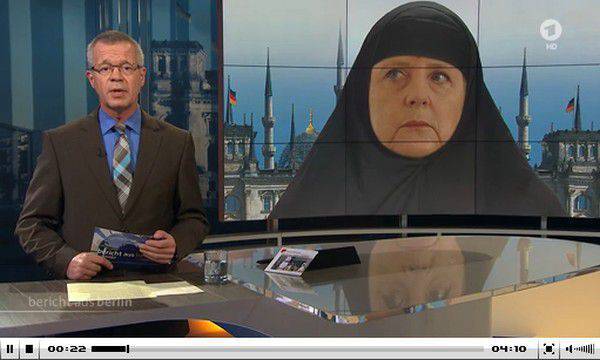 We will refrain from evaluating the pictures and the fantasies of the authors. We can only say that the Germans themselves, and Europeans as a whole, this collage was not so much surprised, but rather excited and even angry.

Brittanya «The Guardian», for example, reported on numerous accusations of the channel in the "anti-Islamic propaganda." The editors of the television program “Bericht aus Berlin” were inundated with complaints after the montage, in which the German Chancellor wears an outfit corresponding to the one “often worn by Iranian women”. The host of the program, in addition, talked about the threat to German values, the newspaper notes. He also reflected in front of the viewers: “How is life changing? In fact, how do we respond to refugee issues with equality, with women's rights, with press freedom and freedom of speech? These are questions to which we have no answer, and these questions are the breeding ground for fear. ”

Looks like the public misinterpreted everything. The ARD leadership had to respond to critics: photo montage was misunderstood "on many levels."

The answer to outraged viewers, we add, was the October 5 on the confirmed Facebook page of the Bericht aus Berlin program (this page is very popular on the web). Short the note on the morning of October 8 had 492 likes, 444 comments and 83 reposts.

The editors answered, not without humor. The note begins with the words: "Wir freuen uns über die zahlreiche Kritik an unserer Grafik ..." That is, the creators of the picture with the angel in the hijab are happy with the numerous criticisms that have appeared about the picture.

The editors “regret very much” that some people “did not agree,” or even “misunderstood” the meaning of the plot with the chancellor in general. The note states that the presenter was talking about the achievements of Western society - about freedom of expression, freedom of the press, about equality. These freedoms are also “reflected in the collage”.

At the same time, the editors noted that the creation of such pictures journalists, of course, attract the attention of the audience.

Any suggestion that the television channel is working "for the promotion of Islamophobia", the editorial board "categorically rejects".

Note that there is another aspect of this collage. Side. The fact is that rumors about the possible nomination of Angela Merkel for the Nobel Peace Prize are being exaggerated in the major Western media. And the hijab here is just Angela on hand. She actually became the main state person in the European Union that cares for refugees. It is to Germany that numerous migrants from the Middle East, from Afghanistan, from Pakistan and from the north of Africa, also rush.

The agency Bloomberg, with references to analytical and bookmaking companies, reported that the German Chancellor is one of the most likely candidates for the Nobel Peace Prize. "Angela Merkel took the lead in a rather delicate European discussion and voiced a clear moral position that helped turn the tide of the debate", - quotes Interfax Director of the Peace Research Institute in Oslo Christian Berg Harpviken.

Political analyst, chairman of the expert council of the Eurasian Ideas Workshop Foundation, Grigory Trofimchuk, believes that such information appeared right now not by chance. According to him, the nomination of Merkel may have a verified political goal.

“Angela Merkel is a rather controversial candidate. And this is quite unexpected. news- an expert told a radio journalist "Satellite". - Because usually those people who are nominated for the most important Nobel Prize are almost always discussed, they are talked about long before the presentation, their chances are weighed. And Angela Merkel's candidacy appeared quite unexpectedly. But we know who distributes these premiums. Peace Prize has a political sound. We remember to whom this award was awarded at the time, including to Barack Obama. That is, everything is not just like that. Therefore, we can conclude that if such a candidate as Angela Merkel appeared, then this, from the point of view of the West, has its well-defined political goal. ”

According to the political scientist, "inside Europe, where Germany is actually the leader, they sent a stream of refugees so that the European Union would be cut off a little and qualitatively follow the instructions of the West and Washington." This is a whip. On the other hand, Merkel was shown a carrot: "... if she fulfills all the instructions well, then maybe she will receive this award."

But the data of the "Bookmakers Rating", which with reference to professional website lead "Arguments and Facts".

The coefficient that Merkel will receive the Nobel Peace Prize in 2015 is equal to 3.00. The second and third places in the list of favorites with chances to win 1 to 6 are now shared by Eritrean priest Moses Zerai (also helping refugees) and the head of the Roman Catholic Church, Francis (the fight against poverty).

Leading Researcher of the European Political Studies Department of the IMEMO RAN, Germanist Alexander Kokeev said "Free Press": “We will still not be evaluated, but by those who choose members of the Nobel Committee. I fully admit that from the point of view of someone, Merkel is the wrong candidate. But for objectivity, you need to try to stand on the other side. ”

According to the expert, Germany today is the leader in the EU and the largest leader in the Western world. Angela Merkel remains in the role of an intermediary between the West and Russia “both on issues of Ukraine and on the Minsk agreements,” the analyst recalled. She meets both Putin and Poroshenko. “And she really takes a certain, very benevolent position on refugees,” the expert said further, “which, in my opinion, deserves positive words. This applies to the reception of refugees, and the fight against xenophobia in Germany. ”

“From my point of view,” the expert said, “Angela Merkel still deserves the title of laureate of the Peace Prize much more than, for example, Obama. Who received a high award in advance, when he just led the country. It was hoped that he would correct Bush’s junior political blunders. What will get close to Europe, and reboot with Russia. Everything was premature. ”

Rumors in a major Western press about the upcoming nomination of A. Merkel for a prestigious award and a collage on an influential German television channel complement each other. Although the collage in Germany was misunderstood, he really hints at the same time tolerance towards migrants and the policies of Angela Merkel towards them. Who, if not Angela (to be more precise, Germany), will disentangle all this mess with refugees, brewed by American and NATO chefs according to the recipe of the “Arab spring”? All other EU countries are noticeably poorer. And their leaders are not so “kind” to migrants.

In addition, Angela Merkel, anyway, is much more worthy of the prize than some of its predecessors.

But where will Germany come if every year it takes a million and a half refugees?

Observed and commented on Oleg Chuvakin
- especially for topwar.ru
Ctrl Enter
Noticed a mistake Highlight text and press. Ctrl + Enter
We are
Project "ZZ". The case of Angela Merkel lives and winsRefugees from Syria. Will Russia accept immigrants from the Middle East?
40 comments
Information
Dear reader, to leave comments on the publication, you must to register.