October 8 2015
13
The M107 is an American 175mm self-propelled artillery unit from the 1960s. Serially produced since 1962, at present a certain amount of these ACS can still remain in service with South Korea, Israel, Turkey and Vietnam. For its time, this ACS was one of the most powerful mass-produced artillery systems in the world. The first serial self-propelled gun was transferred to the American army in 1963. At different times, three different companies were engaged in their production: FMC, Bowen-McLaughlin York and Pacific Car & Foundry, which, before the completion of serial production of these ACS in May 1980, managed to release 524 M107 self-propelled guns.


In August 1955, the US military gave a high priority to the creation of various types of airborne military equipment, including self-propelled artillery installations. In January 1956, the US Army Artillery and Technical Service began work on the formation of tactical and technical requirements for the implementation of the program of air transportable heavy artillery. Already in September 1956, the project of the Washington company Pacific Car & Foundry received approval, which ultimately received a contract for the creation of a family of self-propelled guns on a common base and the construction of 6 prototypes, including two installations with a 175-mm gun, designated T235, were adopted for service under the designation M107. Three more T236 prototypes were armed with a more powerful 203 mm howitzer, and later they were adopted under the designation M110. Another T245 prototype, which was not adopted for service, was to receive a 155 mm gun. In addition, the company offered options for the T120 armored recovery vehicle and the T119 unarmored recovery vehicle.

In June, 1961, Pacific Car and Foundry Company was awarded the initial contract for the production of self-propelled artillery mounts M107 and M110. The first production vehicles were ready in 1962 year, and the first battalion of the M107 ACS was formed at Fort Sill in January 1963. In the US Army, M107 were deployed to battalions of 12 guns in each. Installations used by the US Army and the United States Marine Corps. 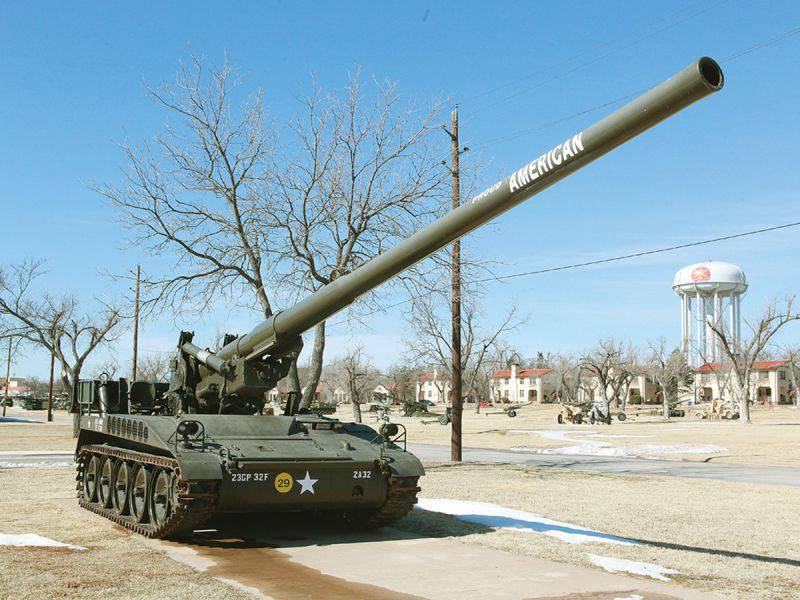 The M107 ACS had a classic front-engine layout, with the location of the transmission compartment in the frontal end of the hull, followed by the engine compartment and the control compartment in the frontal part of the hull, on the right and on the left, respectively. The aft part of the self-propelled artillery body was occupied by an open fighting compartment. The complete calculation of the SAU consisted of 13 people: the commander, the driver, three gunners and 8 loaders. But besides the driver for the SAU, there were places only for 4 crew members: two gunners and two loaders who were located on the sides of the crew compartment. In this case, the driver was the only member of the crew of ACS, which was covered with at least some armor. The rest of the crew were transported on the march by the M548 transport-charging vehicle - it was an unarmored tracked vehicle carrying ammunition; on the SAU itself, all the ammunition carried was only two ready-to-fire shots. In this case, the size of the ACS allowed in case of extreme need to place on it at least all members of the calculation.

The installation case was welded from steel armor plates of different thicknesses. The frontal and side armor was 13 mm, the booking of the hull roof was also 13 mm. The corps was divided by partitions into a fighting compartment (in the stern), a control compartment and a power compartment (in the bow). On the roof of the front part of the SAU building there was a turret of a driver with a hatch and periscopes, as well as removable covers that provided access to the power compartment, air filters and rechargeable batteries. The fuel tank was located in the aft hull. In addition, in the stern of the ACS were located two openers with a hydraulic drive, which were set on the ground when firing.

The first prototypes of the ACS chassis were equipped with Continental AOI-8-628 air-cooled gasoline engine with the horizontal opposite cylinder arrangement, the engine developed power 3 kW, as well as an Allison XTG-230-410 transmission. The engine was equipped with a direct fuel injection system. In the future, it was decided to replace the engine with a two-stroke 2-cylinder diesel engine with liquid cooling and turbocharging, which developed the power of 8 kW at 309 rpm. The use of this engine allowed the artillery installation to move on paved roads at speeds up to 2300 km / h. The engine compartment and drive wheels were located in front of the case. The engine was located to the right of the driver. A removable panel located on the MTO roof (to the right of the mechanic drive hatch) provided technicians with access to the power plant for routine maintenance and routine or scheduled repairs. 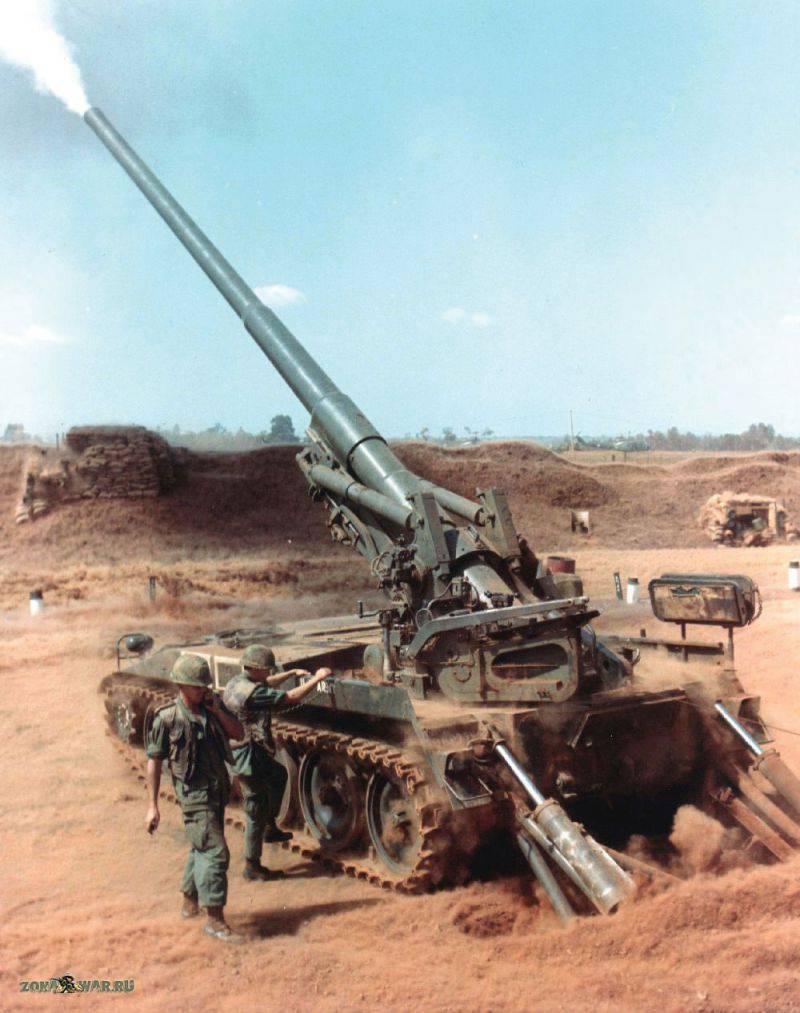 The chassis of the self-propelled artillery installation M107 included 5 rollers of large diameter (on each side), rear-wheel guide wheels, front-wheel driving wheels. Support rollers in the chassis was not available. Caterpillars with a metal hinge equipped with removable rubber pads. The elements of the undercarriage were attached to the SAU case using an individual torsion bar suspension. Each roller was equipped with a double-acting hydraulic shock absorber. The device of the used shock absorbers made it possible to adjust the suspension stiffness, and hence the smoothness of the car in various road conditions, as well as block the entire suspension to ensure the stability of the hull during firing.

The suspension locking mechanism used ensured the transfer of the force applied to the ACS directly to the ground. This quality of the suspension was new, and it was implemented when creating repair and recovery vehicles that received cranes. This solution made it possible to keep the position of the crane constant when lifting various loads to a predetermined height. In addition, the presence on the ACS of the suspension locking mechanism allowed, in certain cases, changing the ground clearance of the machine, as well as giving the installation case different angles of inclination relative to the transverse axis, which could be used to increase the angle of the vertical guidance of the gun.

On the M107 ACS, an 175-mm M113 gun was used, which was mounted on a completely open stand of the hull in the rear of the hull. The calculation was not protected by anything. The gun was equipped with a hydropneumatic recoil device and the same balancing mechanism. The horizontal and vertical drives were fully hydraulic, with duplicated manual controls that the calculation could use in emergency situations. The gun had a hydropneumatic recoil system, the minimum recoil stroke was 0,711 meters, and the maximum - 1,778 meters. At the stern of the installation, a semi-automatic loader was mounted on the left side, which raised the 175-mm projectile and sent it to the charging chamber. The required power for the operation of this system was supplied from the hydraulic system of the ACS, but in emergency mode it could also work from a manual drive. 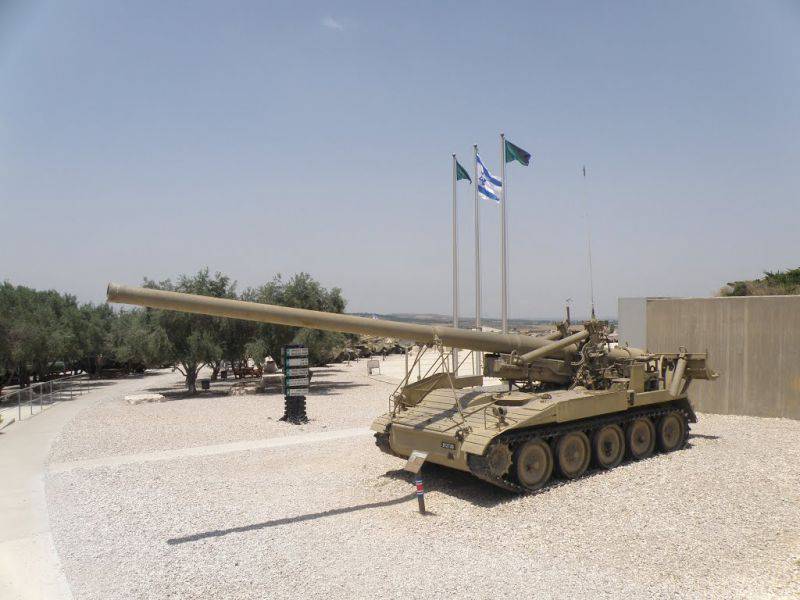 The vertical guidance of the gun was in the range of -2 ° to + 65 °. The horizontal angle of the gun was 30 ° (right and left) relative to the longitudinal axis of the artillery. For shooting the gunner could use a panoramic sight (magnification × 4 and field of view 10 °). There were also a vertical targeting quadrant, a gunner's quadrant and a telescopic sight (magnification × 3 and field of view 13 °) for direct firing.

Together with the M175 113-mm gun, only M437A2 or M437A1 shells could be used. These were high explosive fragmentation ammunition. Each such projectile weighed 66,78 kg, but they differed in the mass of the warhead. So M437A1 contained 13,6 kg of TNT, and M437A2 contained 14,07 kg of Composition B, which on 59,5% consisted of hexogen, on 39,5% of trotyl and on 1% of phlegmatizer in the form of paraffin. The maximum range of these ammunition was 32 700 meters. In addition, it was possible to use ERSC Mk 107 MOD 7 shells with M7. It was an active-jet ammunition manufactured by Space Research Corporation, with it the maximum firing range of the ACS increased to 40 000 meters. However, this shell was never adopted by the American Army, but was used by the Israeli army.

Nuclear ammunition in the arsenal of the M107 ACS did not exist, since the American field artillery already had such projectiles for 155-mm and 203-mm howitzers, which was considered sufficient. Theoretically, the rate of the gun mounted on an artillery mount was only one shot per minute, but a well-trained, well-trained, well-coordinated calculation of the setup could have increased the rate of fire at least twice. A powerful coulter, equipped with a hydraulic drive, transferred the recoil energy to the ground and provided stability for the self-propelled gun during firing.

The standard equipment of the ACS included an infrared periscope, which the driver used to drive the car at night. At the same time, the system of protection against weapons mass destruction on the M107, of course, was absent, since the instrument and the calculation were located on an open platform. For self-defense, the SAU crew had 11,43-mm submachine gun M3A1 (180 ammunition in 6 stores), four 7,62-mm automatic M14 rifles (720 ammunition in 36 stores), and 8 hand grenades. 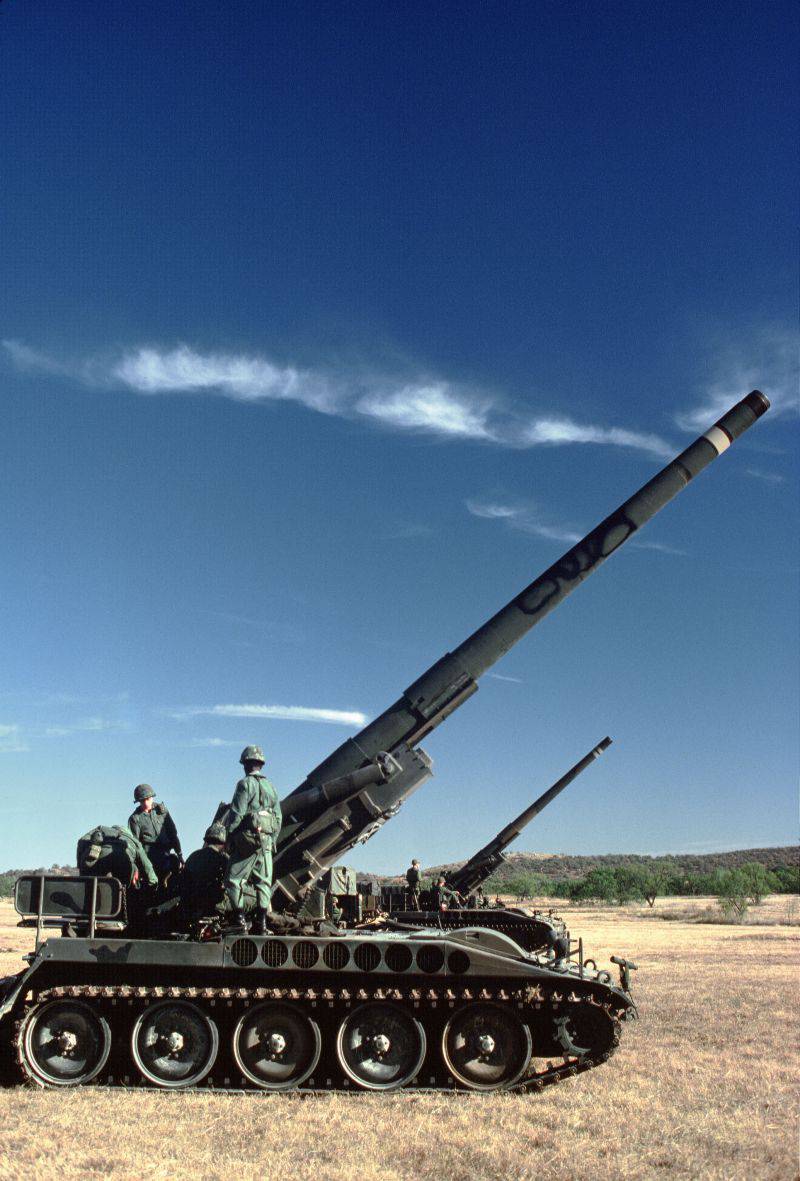 American and South Vietnamese ACS M107 took an active part in the battles during the Vietnam War, with a certain amount of ACS data captured by the fighters of North Vietnam as trophies. In addition, the 4 SAU battalion was in service with the Israel Defense Forces and took part in the October war (October 6 - October 24 1973), while the M329 107 battalion was the victim of an Iraqi fighter jet attack by the Hawker Hunter.

Already during the Vietnam War, it turned out that the survival of the M107 ACS gun was very low: when firing full charges, the barrels, which theoretically were designed to produce 700 shots in this mode, burned out and, as a result, fell into disrepair after 200-300 volleys. for increased pressure of powder gases. In this case, the full charge calculations produced no more than 30% of all shots. To maintain the combat readiness of their artillery batteries, specially re-equipped C-141 aircraft were forced to fly to Vietnam, in the cargo cabins of which three spare barrels were transported. The trunk was changed to an ACS by 30 specialists with three cranes, this operation took 3 hours. In addition, cases of malfunction of the hydraulic drive systems and anti-recoil ACS systems were reported in Vietnam, which did not have the best effect on its prospects in the American army. The transportation itself was inconvenient. A car weighing a little more than 28 tons at that time could not take on board a single American transport aircraft. Before transporting the self-propelled unit by air, it was disassembled into parts, on one military transport plane the ACS chassis was transported, and on the other its artillery part.

In addition to the US armed forces, the M107 SAU was in service with the German Army from 1964, and later the armies of Great Britain, Israel, Iran, Holland and other countries. At the beginning of the 1970-s, all American self-propelled guns M107 were upgraded, self-propelled artillery mounts equipped with new barrels, which had a long service life, as well as more effective recoil devices and improved loading mechanisms. At the same time, the existing design flaws and the desire to standardize ammunition (switch only to 155-mm and 203-mm projectiles) led to the fact that at the end of 1970-s SAU М107 passed into the category of obsolete machines. Starting in the 1978 year, they began to be replaced with 203-mm self-propelled artillery mounts M110A2. This was done because of the non-standard caliber and a very limited assortment of M107 ammunition. In addition, with the adoption of the new at that time American-made automatic revision of the M110A2 ACS, the firing range of which was brought to M107 using active-rocket shells, the need for the latter disappeared. By 1981, all M107 US forces were converted to M110A2. This was not unusual, since the M107 ACS chassis was common to the M203 110-mm ACN and M578 ARV repair and recovery vehicle.

Performance characteristics of the M107: 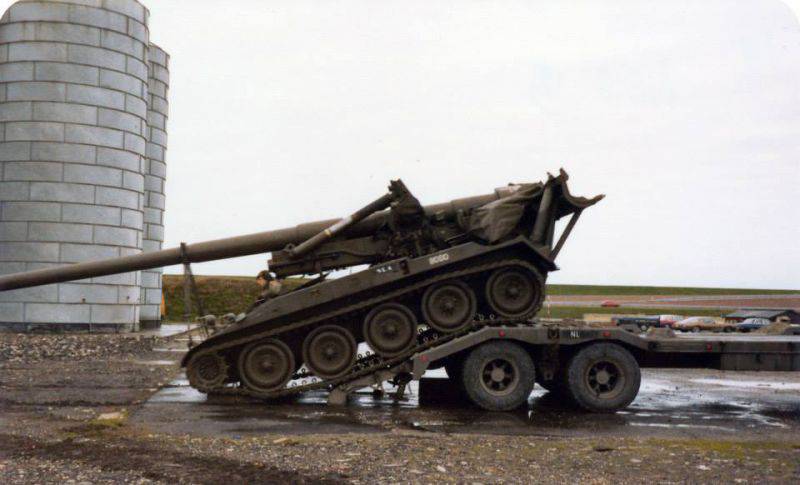 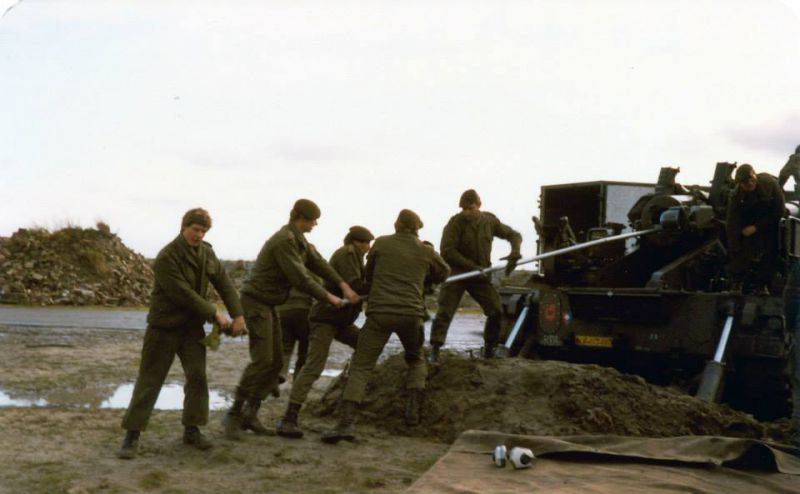 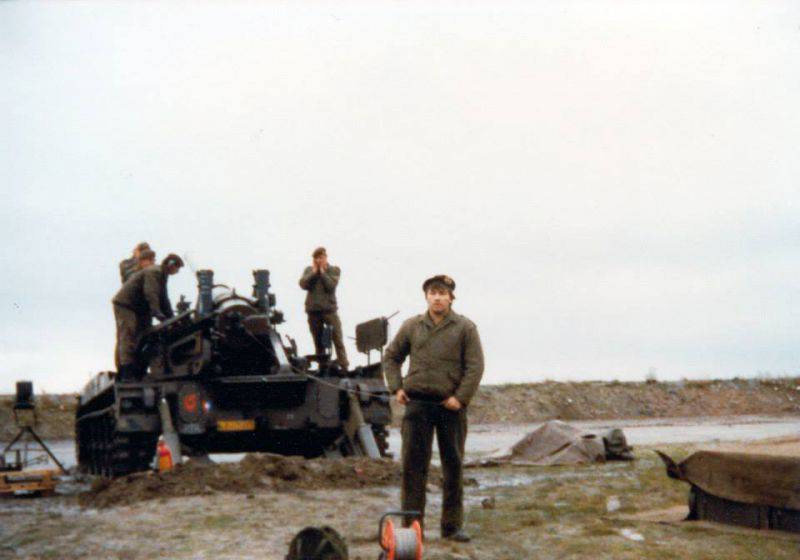 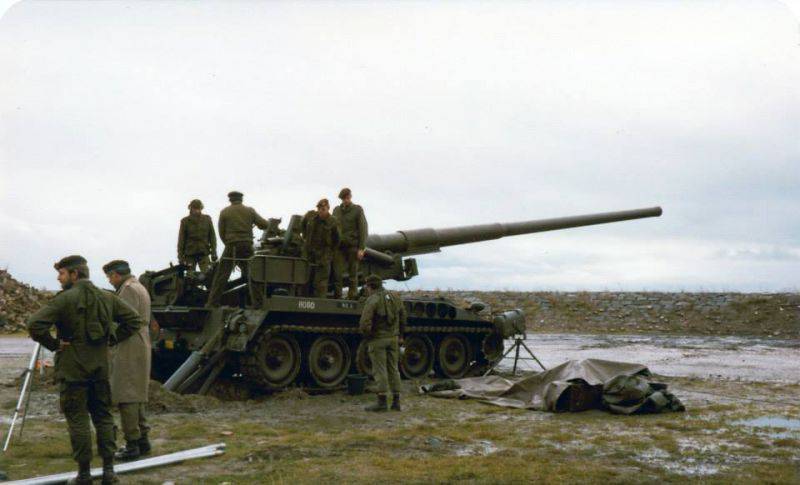 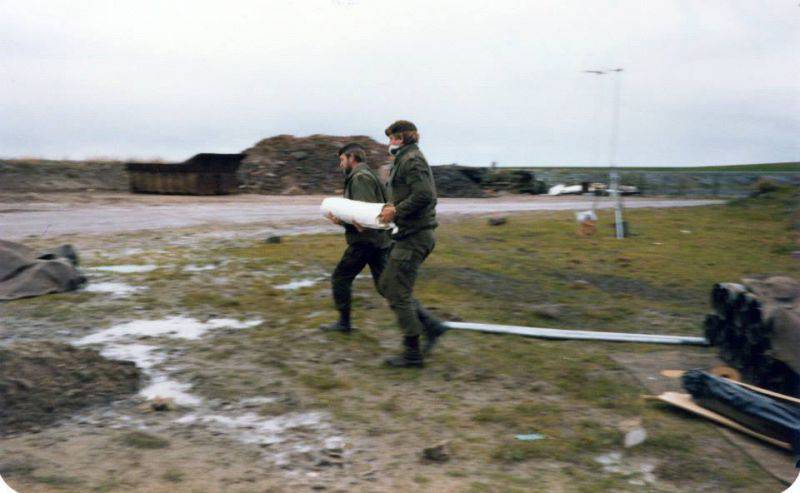 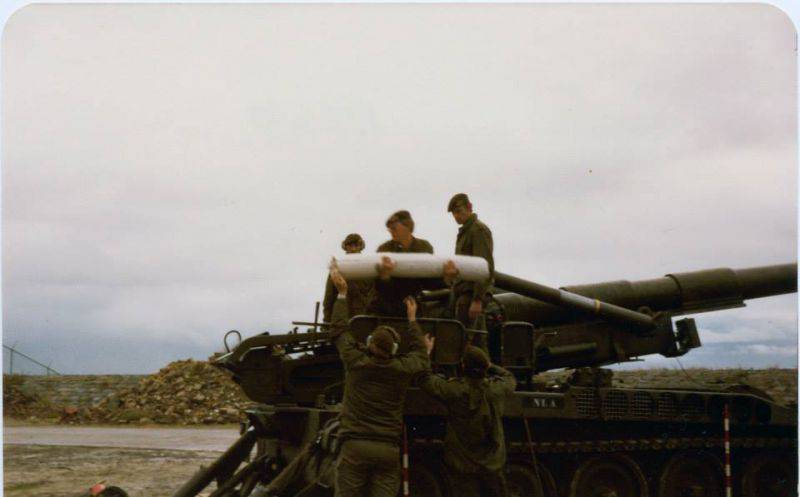 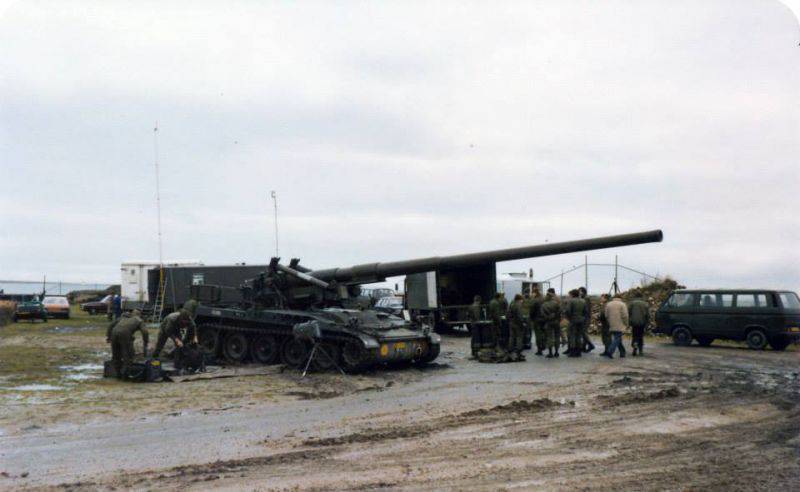 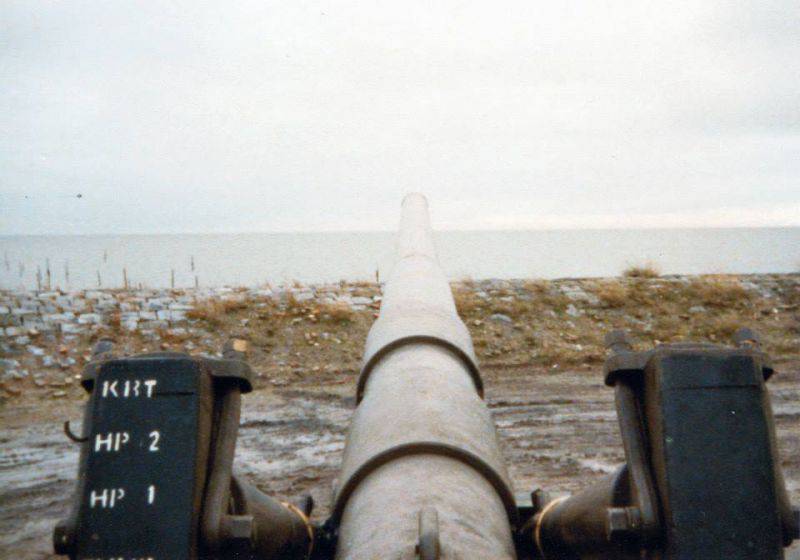 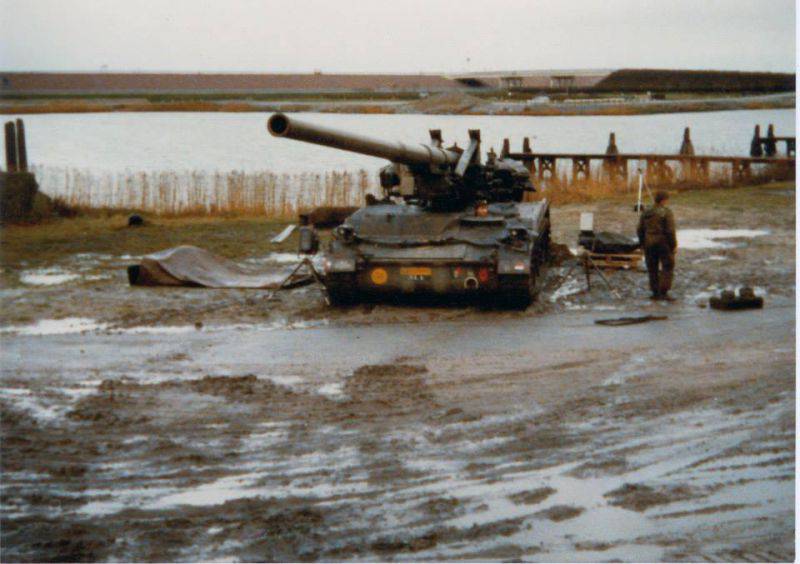 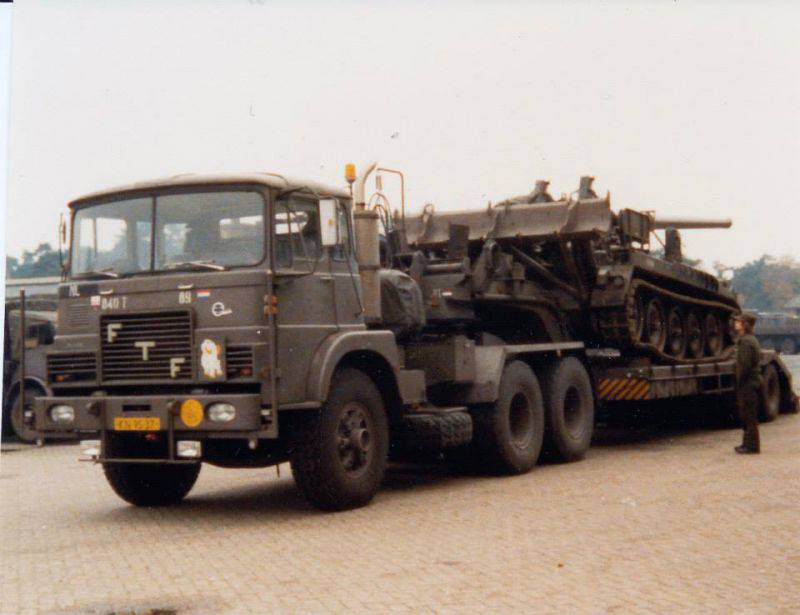