Welcome to a different reality!

October 8 2015
134
October 7 event occurred, the importance of which can hardly be assessed at first glance. The guard ship “Dagestan” and the small rocket boats “Grad Sviyazhsk”, “Uglich” and “Velikiy Ustyug” attacked the Islamists in Syria with the Caliber cruise missiles (modified 3М-14 with a range 1500 km). "Calibres" crossed the territory of the three countries of Iran, Iraq and Syria itself, after which hit 11 targets. The case is, if not unprecedented, then extremely rare in modern stories. Without false modesty, one can say that Russia implemented the American concept of a “global strike” before the United States. 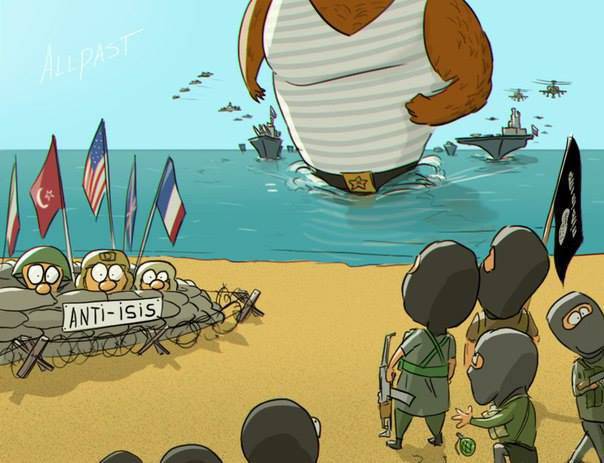 If you recall the experience of using such weapons The United States, then the Americans traditionally attack from the sea, avoiding lumbago across large continental distances, not to mention the need to cross the airspace of several countries at once. With the capabilities of the US Navy, such schemes are unnecessary excesses. For the sailors of the Caspian flotilla The Russian Navy, what was happening was the first truly combat experience since the Great Patriotic War.

The tactical advantage against the backdrop of the assault of the troops of Assad is also quite noticeable. After an international scandal about the random violation of Turkish airspace, Moscow found a surprisingly original way out, and the Islamists in the border areas are being destroyed by missiles, the interception of which is impossible.

The Caliber missiles (long-range) do not violate the INF Treaty, since they do not have a ground-based base. By the way, Americans have long ago developed a modification of Tomahawk missiles with a radius of more than 3000 km, so do not complain to them. And this is not to mention the future missiles of the missile defense system in Europe, which, unlike the “Caliber”, directly violate the INF Treaty, as it is provided for in the ground-based.

Carriers "Caliber" - a relatively simple and inexpensive ships. These are the small rocket ships of the X-NUMX 21 "Buyan-M" project and the sentry ships of the 631 11 "Gepard" project. Their main advantage over stationary launch shafts in mobility, including in inland waters of the Russian Federation. Say, the ship in the Tsimlyansky reservoir is capable of hitting Naples (the base of the Sixth Fleet of the US Navy), Copenhagen and Oslo, not to mention Berlin. And from the southern Caspian the whole of Saudi Arabia is shot through. Of course, the capabilities of Russian missiles were known before, but after such a vivid demonstration, the last doubts disappeared. What was previously considered purely theoretical probability has now become quite real. There is no doubt that right now analytical centers in various states are preparing reports for their governments on the basis of what has happened. It is also clear that the conclusions that these centers will make will upset someone greatly.

Important and media effect. This is an advertisement of the missiles themselves (even if they are not sold with a range of more than 300 km, legal restrictions do not allow, no one is stopping buyers from modernizing them on their own), as well as ships as universal carriers. Perhaps the same Vietnam, which is now wondering whether to buy him another pair of “Cheetahs” or not, will eventually make the right decision.

In addition, the Caspian flotilla has demonstrated its power, if not to the whole world, then to the Middle East for sure. It is not known how much the spectacle of Arabian monarchs rushing across the entire “Caliber” region is impressive, but now they really have something to think about. Considering the recent Saudi demarche (it’s about declaring “jihad” of Russia by local religious leaders), it would not hurt to remind Riyadh of the possible price of irresponsible statements, not to mention equally irresponsible actions.

Of course, this method of warfare does not belong to the category of cheap ones. Even the Americans, with their broadest financial capabilities and developed industry, use cruise missiles only for a narrow range of tasks, for example, for the initial breakthrough of the air defense system. But from time to time to use such a convenient tool is necessary. October 7 Moscow 2015 has achieved staggering success. This must be recognized regardless of the attitude to the current government or the Russian role in the Syrian campaign. Success is also a success in Africa.

One way or another, a start. The door to the new world is ajar, but what is behind this door will be revealed by the future.

Ctrl Enter
Noticed a mistake Highlight text and press. Ctrl + Enter
We are
The history of the Iraqi Navy. Part of 2. Iran-Iraq War at Sea (1980-1988)The state and prospects of development of the naval forces of Ukraine (2013)
134 comments
Information
Dear reader, to leave comments on the publication, you must to register.