The myth of "one rifle for three"

October 10 2015
185
There is a steady legend that at the beginning of the war our army fought "with one rifle for three." The exact origin of this myth is now hardly possible to find out, however, there is a version that it is associated with the release of the propaganda video "Chapaev with us." If at the moment no one disputes that, then at the beginning of the war the regular units of the Red Army were fully equipped with rifle rifles. weaponsthen the theme “one rifle for three” is still being discussed around the people's militia. 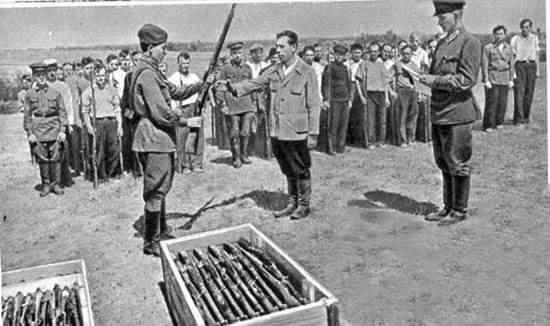 Here is what the chief curator of the Moscow State Museum of Defense funds, S.E. Sobolev in his article “Small arms of the defenders of the capital in the formation of the national militia of Moscow”, based on archival documents on the degree of manning of all twelve divisions of the Moscow national militia on September 3 1941g - “Provision of rifles, machine guns, light and heavy machine guns, 50-mm mortars , 76-mm divisional guns, 122-mm howitzers in them is 100%. Among the total number of machine guns there are 412 machine guns of the Colt arr. 1915 d. In reality, the logistics situation for the militia divisions looked a little different. According to a report from the 33 Army Headquarters to the Reserve Headquarters (the front about the combat and numerical strength of the army units - six national militia divisions sent no earlier than September 20 1941 34 (text dating). 721 28 rifles instead of the 952 714 machine guns, 612 machine guns 7 796: But there was a lack of the following weapons: automatic rifles there were 21 495, and it was required by the 869 956 staff, light machine guns were 784, instead of the necessary 928, Degtyarev submachine guns, there were 2, instead of 102. st divisions had only 7 anti-aircraft machine gun instead of the 51 and XNUMX XNUMX heavy machine guns instead ».

As can be seen from the above data, there was indeed a shortage of armaments, but it did not concern personal small arms. Moreover, there was even an excess of rifles.
The problem was different - not only modern rifles were issued to the militiamen, but in general everything that could fire was a weapon of the First World, Finnish trophy, foreign weapons, transferred to the Russian Empire in 1914-1917. There was a problem of incompatibility of weapons and ammunition - “With the external similarity of Soviet rifle cartridges arr. 1908 and Finnish, Finnish cartridges were stuck in our machine gun belts and it was not possible to shoot at them. For the same reason, Finnish clips were not suitable for our rifles. Therefore, it was possible to shoot Finnish ammunition only one at a time. ”

Was this situation unique? Here is how Alfred Ressel describes the armament of the people's militia in England in the book “On the Roads of War” - “For the defense of England there were no guns, anti-aircraft artillery, and above all tanks. The light weapons that the army had, with the exception of a light machine gun such as Bren, which was produced under the Czechoslovak license, was outdated, but it was also missing. The militia, consisting of former military and civilians, was armed as necessary with berdanks and pointed iron rods from the fences of the parks. Let's go even historical halberds from museums and family estates as weapons convenient for close combat. ”

Here is what Konstantin Telegin, who was a member of the Military Council of a number of fronts during the war, writes in his book “Wars of Uncounted Versions” - “The Military Council decided to mobilize all weapons resources that could be found in educational institutions, headquarters and rear units .. And the employees of the departments of the Moscow Military District increased their efforts every day in the search for internal reserves. A careful examination of cases on the ground revealed that the reserves are still there, and even considerable ones. The first of these is the artillery bases directly subordinate to the GAU. ” At one of these bases, there was just a significant supply of repaired or requiring repair of foreign small arms that had been in warehouses since the civil war.
According to Telegin, by the end of July, it was possible to adjust the output to
5000 units of repaired weapons per day.

It should be noted that the formed militia units of the “first wave” went not to the front, but to the Mozhaisk line of defense built in the rear, where they were engaged in combat training and construction of fortifications. In September, the national militia divisions were reorganized according to the states of the regular rifle divisions of the Red Army.

As you can see, there were really problems with the armament for the Moscow militia, but in no case does it mean that the militia were thrown into battle unarmed with one rifle for three - all were provided with personal small arms. Perhaps, on other fronts, for example, Leningrad, the situation was worse?
From the data of the book by Alexander Kolesnik “Militia formations of the Russian Federation in the years of the Great Patriotic War” you can make up the following table on the armed forces of the national militia divisions (AED):


As you can see, only one of the three divisions had a shortage of rifles, but it was covered with an even larger shortage of personnel. Surprisingly, exactly the same data is cited in his article “One rifle for three” by Anatoly Tsyganok as proof of the thesis about the great shortage of small arms.

Based on the foregoing, it can be said that there were problems with the armament of the people's militia, but they were not of such a disastrous nature that it was possible to say that the militia were thrown into battle without a weapon "with one rifle for three."

Ctrl Enter
Noticed a mistake Highlight text and press. Ctrl + Enter
We are
Diplomats of the People's Commissariat of Defense: on the eve and during the warMyths of the Great Patriotic. Papier mache helmet
185 comments
Information
Dear reader, to leave comments on the publication, you must to register.