"Just near the concentration camp dug a moat and dumped there" 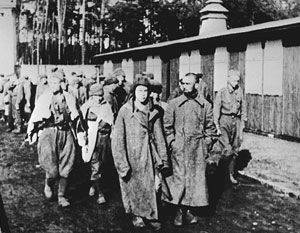 Warsaw accused Moscow of being indifferent to the memory of 800 from thousands of Soviet prisoners tortured by the Nazis in Poland. According to Polish diplomats, their appeals to establish memorials at the burial site are ignored by the Russian authorities. In fact, with the number of dead Soviet prisoners of war, and with their graves, things are somewhat different.


Warsaw is ready to cooperate on the question of the burial of 800 by thousands of Soviet soldiers in the country, but this proposal remains unanswered, the Polish ambassador to Moscow, Katarzyna Pelczyńska-Nalec, complained on Tuesday.

“We have not seen a single official letter from the Polish side. Nothing but common words, no. We do not refuse to discuss this topic! ”

In Warsaw, great importance is attached to the worthy perpetuation of people's memory, said Pelczyńska Nalecz. According to her, Poland is surrounded by "great respect, including the Soviet soldiers who fought and who died or were taken prisoner."
However, as Ambassador RIA said, “News", Who died in the Nazi camps on the territory of Poland 800 thousand. Soviet soldiers did not deserve to perpetuate them." “800 thousand people is a huge amount, and we are ready to cooperate so that these 800 thousand people are also buried in a worthy manner in Poland,” said Pelczyńska Nalecz.

At the end of September, Pełczyńska Nalecz was summoned to the Russian Ministry of Foreign Affairs - she was declared a strong protest in connection with the desecration of more than 50 tombstones on the graves of Soviet soldiers in the cemetery in the town of Miljcice. Following this, the Polish Foreign Ministry condemned acts of vandalism. Police later said the two children 9 – 10 were vandals.

A spokesman for the Polish embassy Bartosh Chihotsky clarified that the cemeteries of Soviet soldiers who fell in battles, Russian soldiers from the First World War and even Napoleon’s campaigns are mostly in perfect order - almost two thousand.

“They are equipped at the expense of the budget of Poland. But prisoners of war, tortured in German camps, as a rule, do not have their own cemeteries, not even symbolic monuments, - said Chihotsky to the VIEW. - The places of these graves are not determined - they are only known approximately. Sometimes people of different nationalities were buried there together. They did not leave a trace. You know how people were killed in concentration camps! This is such a staggering figure - 800 thousands. " 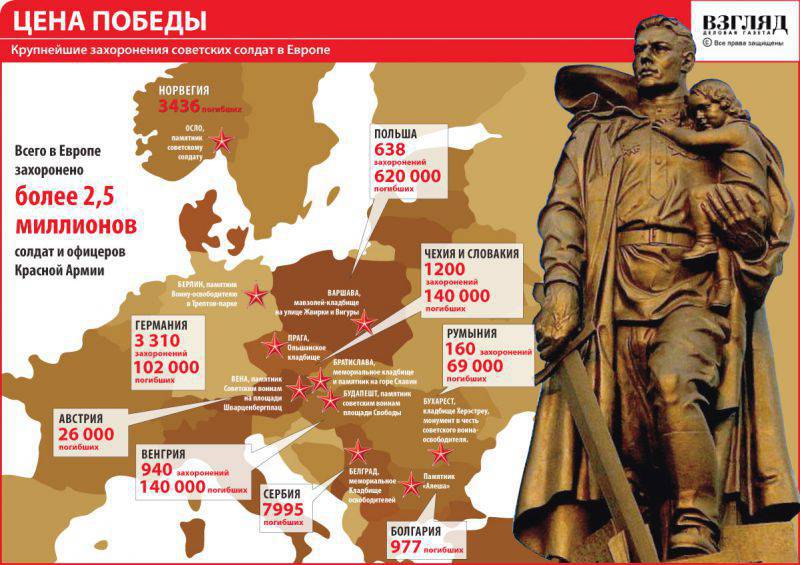 "The Germans cleaned up everything behind them"
According to Chihotsky, Polish diplomats suggested several times to the Russian side to discuss the installation of such monuments, but still have not received an answer. However, he found it difficult to clarify what Warsaw would like to achieve. “There is not even interest from the Russian side. Therefore, it is difficult to say in detail what the Russian role could be, ”the diplomat admitted.

“Of course, we do not make any difference between prisoners of war and those killed in battle. Many of them are buried in common cemeteries, which are also jointly repaired, - an employee of the Russian mission in Warsaw replied in an interview with the VZGLYAD newspaper. - We have everything going evenly. Every year we have about seven to eight cemeteries equipped, there can be no difference. ”

As the Russian diplomat said, a regular repair plan for the next year was recently prepared. “Which memorial to equip in the first place is decided depending on the distance from the roads and cities, but the main thing - from the attendance. Unfortunately, most of the dead prisoners have no personal data. The Germans did their time, they cleaned everything up after themselves, ”he said.

According to our diplomat, there is no reason to talk about the abandonment of such monuments - all of them are certified and stand in line for the arrangement. “For example, this year we worked only in the Malopolska province (this is the south of the country, not far from Krakow). There, repair was mainly in the cemeteries of the soldiers of the Soviet army. But, let's say, next year it is planned to repair the memorial on виvirki and Vigury, in Warsaw, thousands of Red Army soldiers and prisoners of war are buried there. The second example - the final stage of work is scheduled in Pułtusk, there is also a joint cemetery. The cemetery in Brzezinka - more than eight thousand Red Army men and prisoners of war were buried together too. ”

But remembers the saved world

However, the interlocutor of the newspaper VIEW acknowledges that it was originally on the ground that the burials of the soldiers who died during the liberation of Poland were clearly marked and equipped - this is obvious, since they were buried by their own. “And how were the Germans buried? Just near the concentration camp dug a moat and dumped there. The boundaries of such graves are difficult to establish. Only in the 60-ies at such places there were monuments. The monuments are, of course, more modest - not as large-scale as in the central cemetery in Warsaw. But they are there, ”the Russian diplomat stressed.

“Yes, attendance of such monuments is much less. Most of the prisoners remain unknown, so no one goes to them. Relatives are going to Poland - those for whom it is important to bow to the grave of the very person who died. That's all. This is the only difference! But we do not forget them, and, for our part, we also repair and equip them, ”the diplomat said.
“We at the embassy did not see a single official letter from the Polish side on this issue,” the Russian diplomat is annoyed. - They have now expressed their opinions orally about this. But nothing but common words, no. We do not refuse to discuss this topic! ”

Either died, or escaped overseas

But the Russian diplomat did not dispute the figures that Peczyńska Nalec mentioned. According to him, the victims could be even more.

“The Poles are talking about 800 thousands, but this is not a fact. 600 thousands of our soldiers died during the liberation of Poland. It is not known how many prisoners. They could have been captured in any territory, and in which camp they were taken, it is not known: either to Germany, or to Poland, or to the Czech Republic. Naturally, we do not possess such statistics. ”

But it is clear that the number of those killed in captivity is incomparably greater, the diplomat acknowledged. “Take the same camps Auschwitz-Brzezinka, Sobibur. Imagine the scale? Indeed, in the territory of modern Poland there were a lot of large camps. Perhaps more than a million could die here, ”the diplomat said.

“We published the catalog back in 2003 year, we call the number there - that our prisoners were all contained here, perhaps, 1,2 million. We can’t say more precisely. It is very difficult to calculate personal data. Now the HBS “Memorial” at the Ministry of Defense has appeared, which is trying to find out from various sources the fate of the soldiers, ”the interlocutor noted.

What proportion of prisoners managed to survive is also unknown. “At one time, we received statistics from the American side that more than 500 thousands of our prisoners of war by hook or by crook left after the war to the States, Canada, and Brazil. We are missing or missing in captivity. Therefore, we must be very careful with the numbers, ”- the interlocutor made a reservation.

“Right now, the Ministry of Defense has opened a representative office in the United States. We pin great hopes on him. We hope that the Americans will give us the promised materials - despite the political intrigues. They once took out copies of documents from the western German lands. After that, it will be possible to calmly understand and delineate who did not return home because he ran away, ”the diplomat explained.

"Not all was included in the catalog"

Sergei Stankevich, a former political adviser to the president, who oversaw relations with Poland at the beginning of 90, and then lived in Warsaw for many years, does not rule out that officials of the two countries really need to meet in order to update the agreement “On tombs and places of memory of heroes War and Repression, signed in February 1994.

“There is a catalog of graves that fell under an intergovernmental agreement and are guarded from both sides. They are being well cared for. But not all was included in the catalog. For example, the monument to Chernyakhovsky was not entered, ”said the former adviser to the VIEW newspaper.

The catalog includes only memorials under which there are burials. “There is no grave under the monument of Chernyakhovsky. And local authorities can really dispose of such monuments, ”he reminded, adding that local authorities sometimes behave unworthily.

“In Soviet times, the inertia of Stalin’s perception was still in effect - once captured, then perhaps the traitors, and it’s not known at all who is buried there. I am afraid that in preparing the 1994 agreement of the year this circumstance was missed. Maybe our diplomats really need to meet and close this gap in the document, ”the former presidential adviser suggests.

Ctrl Enter
Noticed a mistake Highlight text and press. Ctrl + Enter
We are
Greek fishermen: Refugees disemboweled organs in Turkey, and their bodies dumped in the neutral watersOnce again about the “difficult issues” in the history of Polish-Russian relations
37 comments
Information
Dear reader, to leave comments on the publication, you must to register.