October 8 2015
16
Many units need secure transport, but it is not always advisable to purchase full-fledged armored vehicles. In some cases it makes sense to build protected equipment on the basis of ready-made serial trucks, which allows for an acceptable balance of various characteristics and cost. A good example of this approach is the armored "Federal-42591". Such a machine was shown to the general public during the recent exhibition "Innovation Day of the Southern Military District".


The Federal-42591 armored car was first presented at the Interpolitex exhibition in 2011. Since then, this machine had time to enter mass production and begin service in various departments. In addition, this type of technique often appears in the exhibitions of various exhibitions. The project of an armored vehicle based on a serial truck was developed by the Institute of Special Equipment. The main customer of such vehicles is the Ministry of the Interior, acquiring armored cars for internal troops.

The basis of the armored vehicle designed to transport personnel and cargo is the Ural-4320 truck. In the course of conversion into an armored car, the base car receives a set of reservations and a number of new units, thanks to which it can carry out the assigned tasks in conditions of a high risk of ambushes and shelling. This vehicle is not designed to act at the forefront, but it is capable of protecting the crew and passengers from possible shelling from rifle fire. weapons. 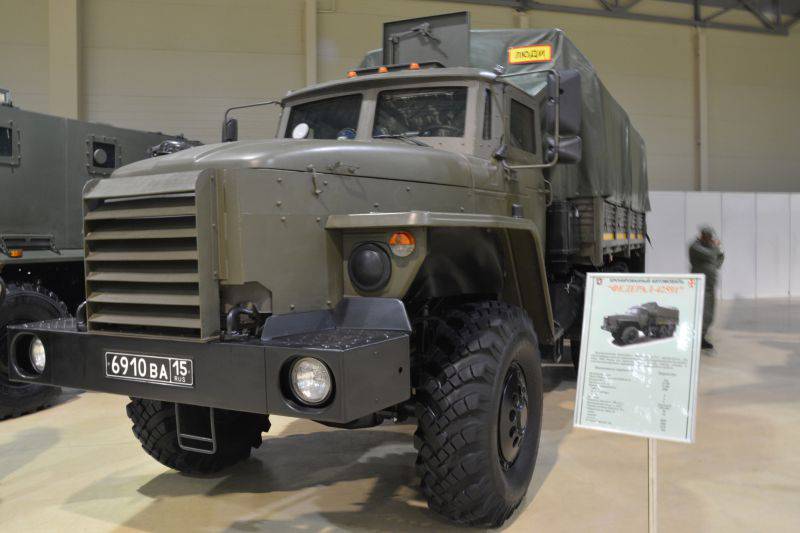 The institute of special equipment has created a set of armored units, which are proposed to be mounted on the base car. These products provide protection of the power plant, crew and landing from various threats. According to reports, the driver and the attendant in the cockpit are protected by 5 class of domestic standards. The cabin roof corresponds to the 3 class. The armored vehicle for the transport of troops corresponds to the 6 class.

Additional booking is established around the engine (in particular, the characteristic grille is used) and crew jobs. Instead of the base car body, a special van module is used with landing places. The landing module in size and shape is similar to the standard KUNG domestic production. Mounts and frame elements for the awning are also provided. All this contributes to the disguise: armored and unprotected "Urals" have a minimum of noticeable differences.

During the upgrade, the base truck maintains a double cab. A landing in the number of 16 people transported in a large armored van. In such a troop compartment are located several shops, which are fighters with weapons. For landing and disembarking it is proposed to use one door on the starboard side and two stern doors. Due to the high height of the machine, for the convenience of entry and exit, there is a step bracket under the side door. Before dismounting through the stern should not only open the door, but also lower the tailgate. For greater convenience, there are steps on board. In addition, a large wide bracket is provided on the upper edge of the bead.

If necessary, the crew can use personal weapons. For shooting from it the car has several embrasures. So, in the windows of the cab two such devices are provided: in the windshield and on the command door. In some versions of the armored vehicle "Federal" embrasures of the troop compartment are provided. The sample of the car shown at the “Innovation Day of the Southern Military District” exhibition was equipped only with commander embrasures.

To date, the Federal-42591 armored cars are being mass-produced and handed over to the customer. The main buyer and operator of these machines are the Interior Ministry troops. The main task of this technology is the transportation of personnel in areas with an increased risk of ambushes and other attacks.

The Institute of Special Vehicles continues to work on the project, the result of which is the emergence of several new machines that differ from the basic armored car with a number of interesting features. Nevertheless, the existing "feds" were already built in a fairly large number and are actively used in the units of the internal troops.

One of the compounds of this structure within the Ministry of Internal Affairs recently provided its Federal-42591-type vehicle for the Innovation Day of the Southern Military District exhibition. We present a small photo review of this armored car. 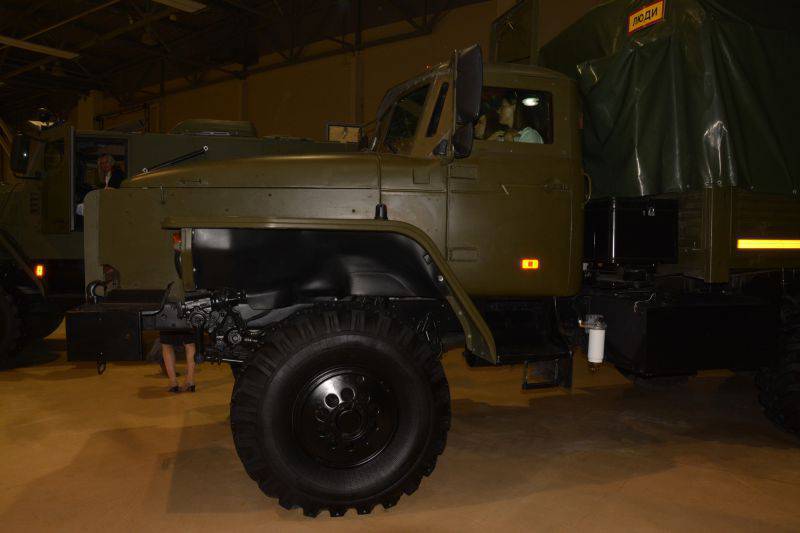 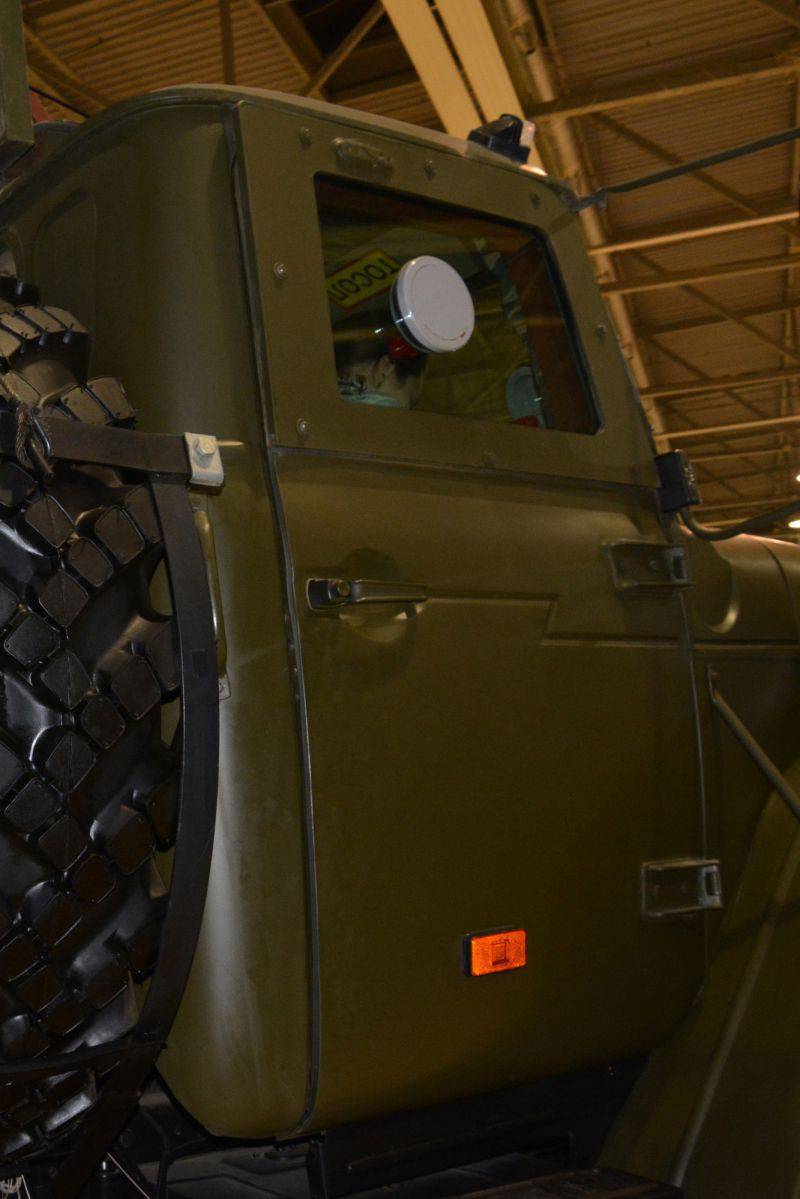 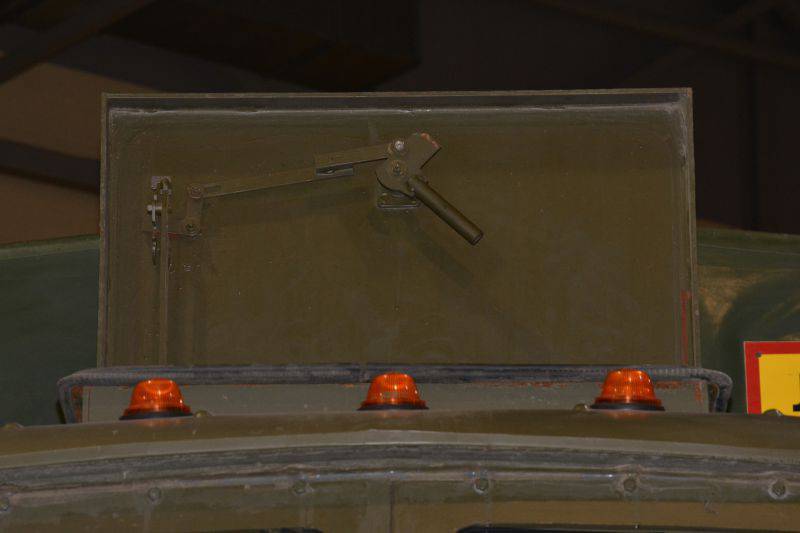 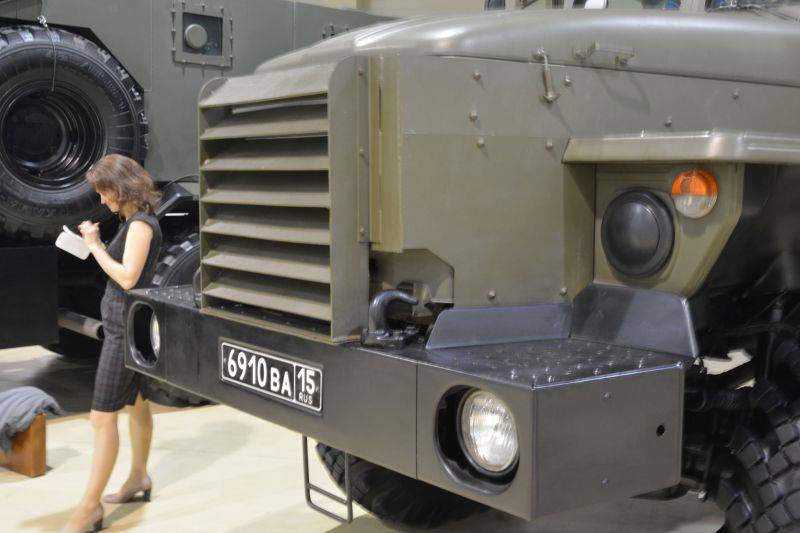 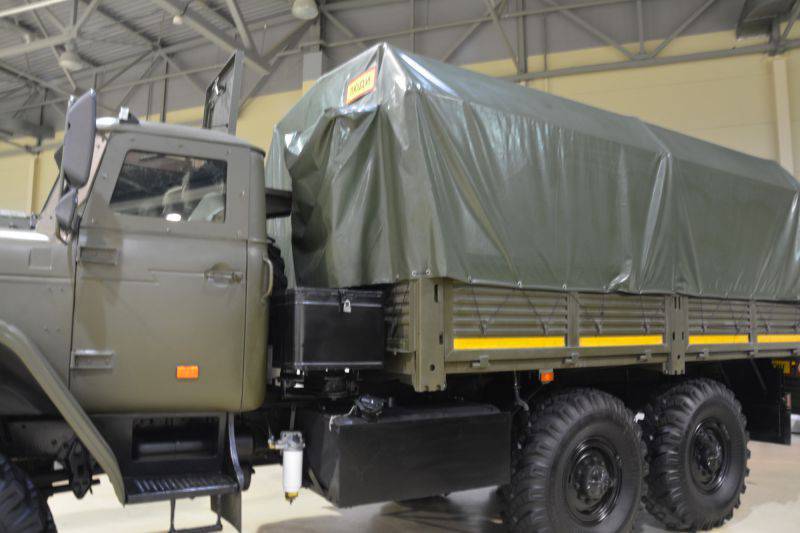 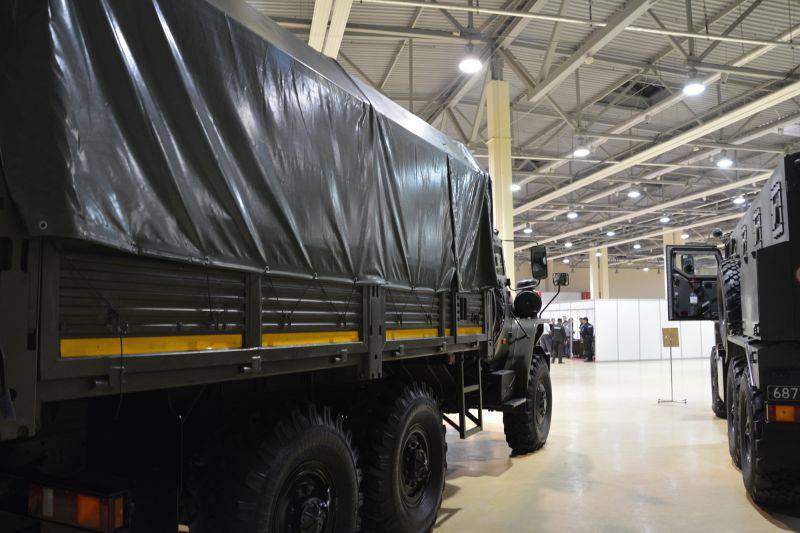 The armored car is equipped with an awning, which makes it look like an unprotected truck brand "Ural" 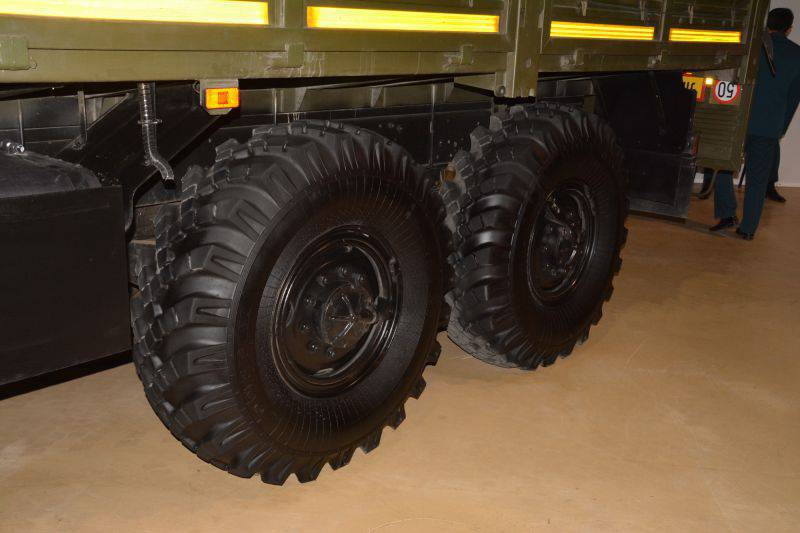 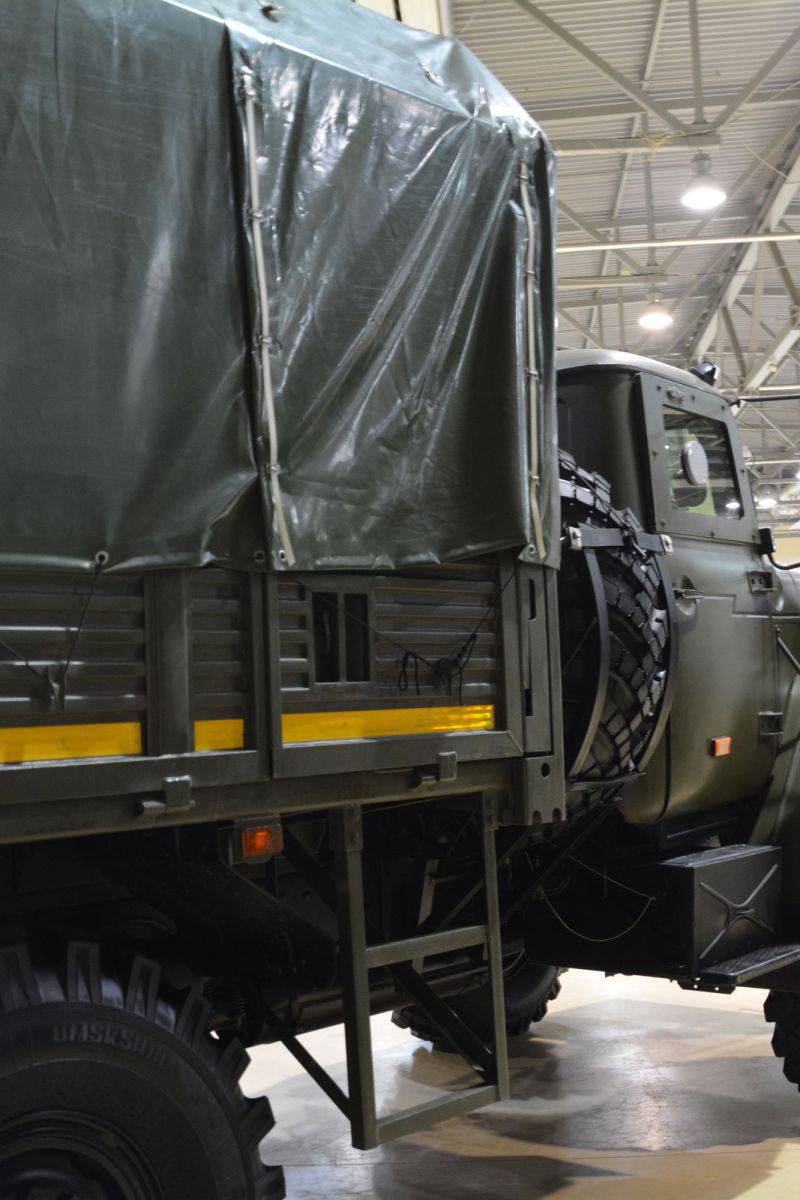 Side door hidden under the awning 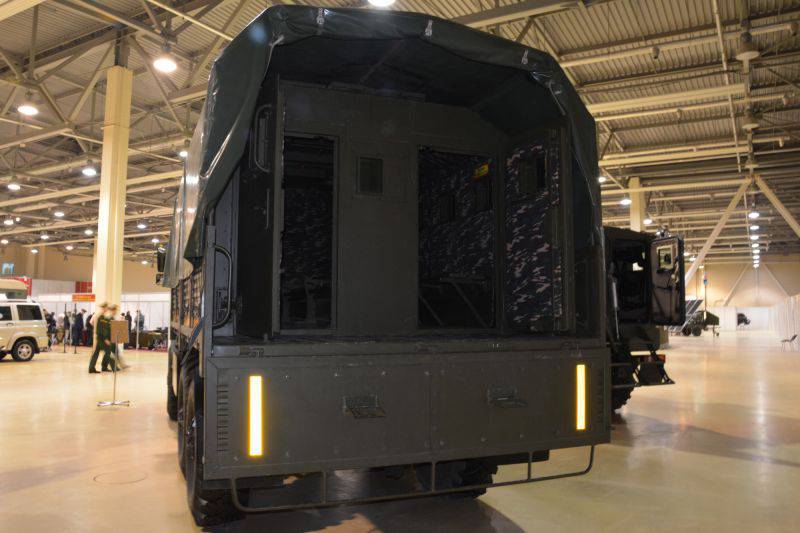 Aft doors and open board. The machine is ready to receive troops 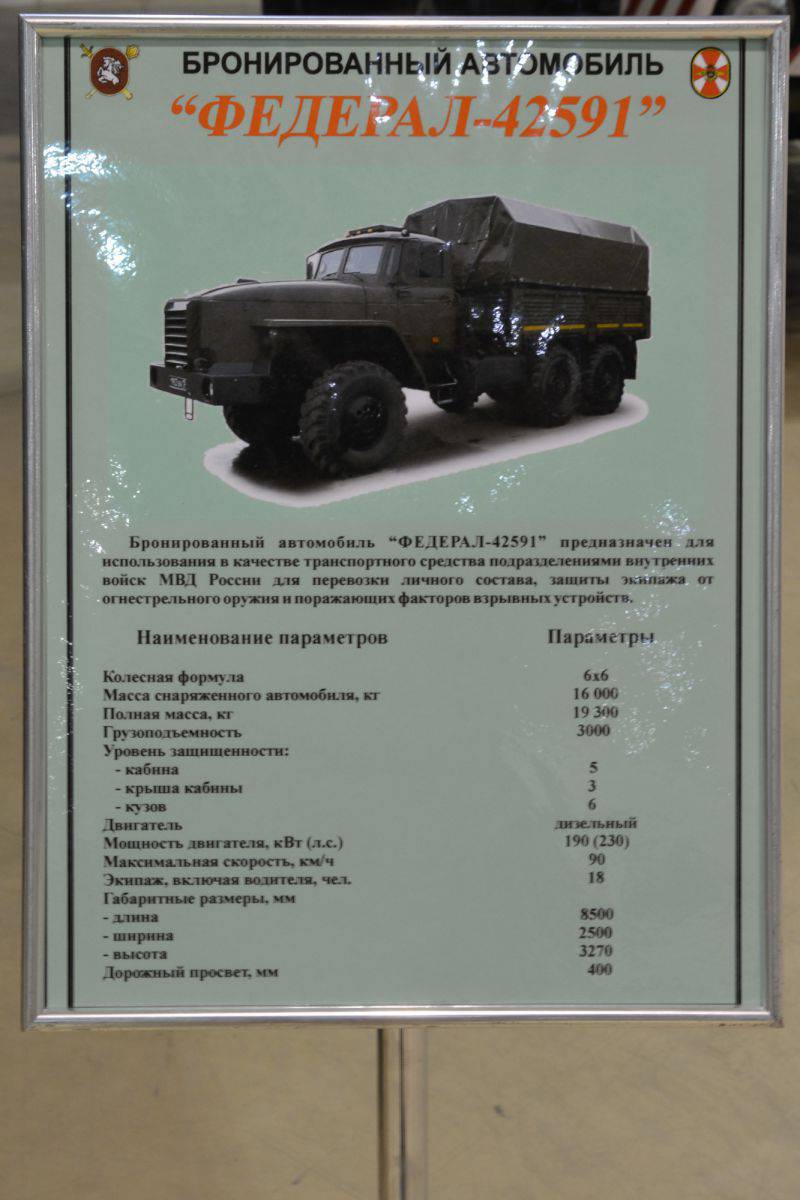