October 9 2015
33
The stick - along with the stone - is one of the first human tools. The stick can be found in almost any street (pipe, thick branch, board, etc.). But, despite the naturalness and simplicity of this tool and its use, you can still give a number of recommendations on the use of the stick in a street fight - as in the case of protection with a stick, and to protect against it.


1. The impact part of the stick is its last third. If the blow is due to the middle of the stick, or to the side closest to the "drifter", it will be much weaker. At the end of the stick all the impact force, the whole swing.
Therefore:
- if you have a stick, hit it with the end, not allowing the enemy closer. Keep your distance.
- if the stick is at the enemy, try to reduce the distance in order to get close to him.

On the street, the enemy is likely to swing the stick randomly, with a large swing and inertia. It is unlikely that you will meet an experienced swordsman or a reconstructor who loves to wave his sword on weekends in the park. Therefore, having waited, when he strikes yet another sweeping blow (naturally, moving away from him to the side or back), rush at the enemy, blocking his hand with weaponsand the second striking / making a grab. How to do this - see below.

2. At the same time, a stick can work poorly in a limited space - it needs a swing. Yes, and at close range, it is already of little use, unless the fighter does not have the skills to work with the other end of the stick - from the little finger.

3. In an extreme situation, as a rule, fine motor skills fail almost completely. Therefore, simpler, “crude” techniques are applicable on the street, and graceful, elaborate movements are of little use. In other words, it’s better to go on historical fencing or to a club of reenactors (especially where applied work with a stick is studied for self-defense purposes) than to some fashionable section of some southeastern direction, where it is full of complex, beautifully looking movements.

But here the question for whom is more important - efficiency, or showiness. For modern people, the second is often more important.

4. The stick works well against the knife, as it can be wired for a longer distance. It is necessary to beat on the hand holding a knife, or other weapon (on the hand, on the metacarpal bones, fingers, joints), and to neutralize the aggressor with the next blow.

5. It is necessary to understand that the usual stick (not a crowbar, not a rod of an armature, not a bit) does not necessarily help to cut down the aggressor. You can break the stick on the head of a person, but he will continue to go on you. However, if it is possible to use a stick, you cannot refuse it. In the end, man became the king of nature at the expense of primitive tools and instruments - sticks and stones.

7. In general, strikes with a stick are identical to strikes with a knife or hand. Usually they beat with a stick from top to bottom - on the head, in the bridge of the nose. Diagonally - over the collarbone. Backhand - on the head (wherever you go, everywhere is "good"). Side impact - the same. Butt bumps with a stick are very rare, although, of course, you can also learn them. They can be applied to the face, Adam's apple, solar plexus, but you need to train accuracy. For example, to hang a coin on a rope, and strike on it with a jab.
You can act with a stick as a bayonet, inflicting a jab injections, blows to the face.
It is good to use a stick, holding it with two hands - you can beat with the middle, you can put butting with both ends.
Blows from the bottom up (to the knee, to the groin) with a stick are practically not used, although they are also possible.

Work with a stick depends on its length. Usually distinguish 4 conditional type:
- staff (to the middle of the chest)
- cane (to the waist)
- baton (with elbow)
- wand (palm)

Stick Exercises:
1. From striking a stick from above
2. From the blow of the stick backhand

1. The first stands with a stick at the ready. Strikes can only be applied in vertical projection (top to bottom). It should beat at full strength and at full speed, but - the training “stick” is made of soft materials (for example, a foam-propylene pipe wrapped with an isolon). She cannot injure, but her blows are unpleasant enough for the fighter to try to avoid them - and thus perform the task correctly. (Note - at first, the first one hits slowly, gradually, the training after the training increases the speed.) The second one runs up to him at the distance of the strike, and then the first strikes. The second one using a feint or without it performs the removal of the stick due to the movement of the forearm with a twist (Fig. 222). 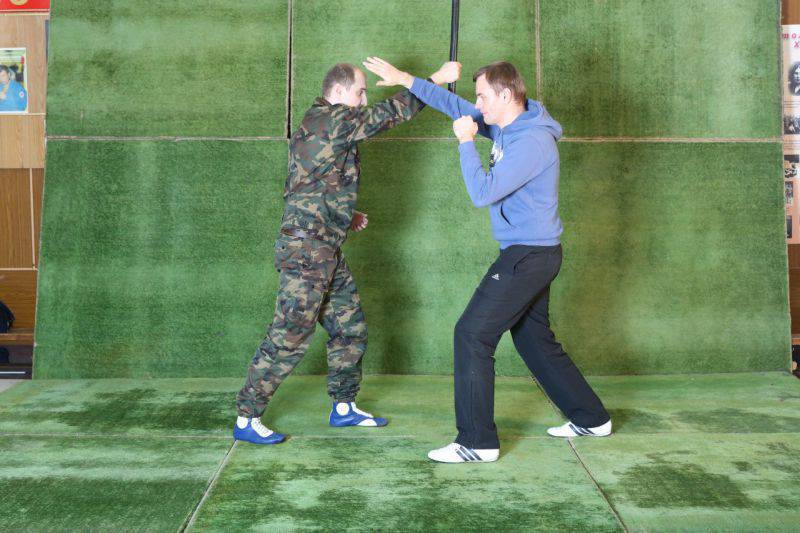 After the removal, he can strike with a fork in the adam's throat and the subsequent back footboard. Or other options - for example, with the impact of the base of the palm. The same movement can be done on the inside, but it is better to always go to the enemy from the outside, from the side, because if we go inside, he can meet us with blows from the other hand. 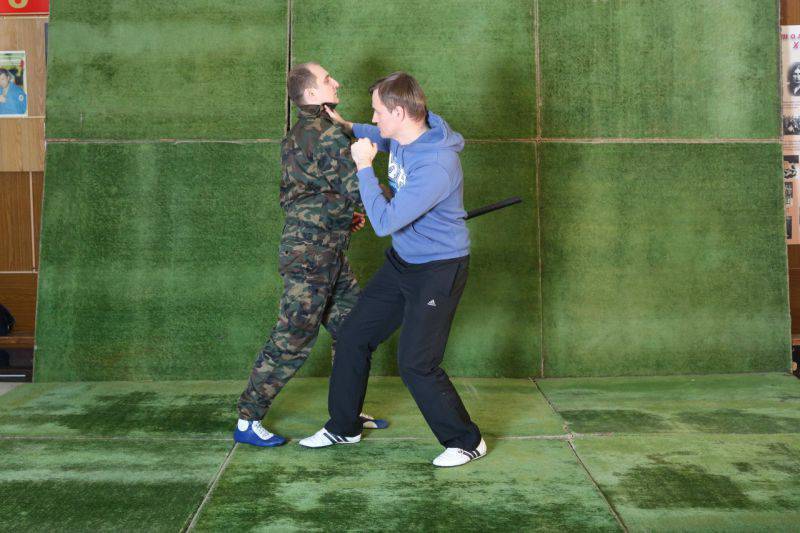 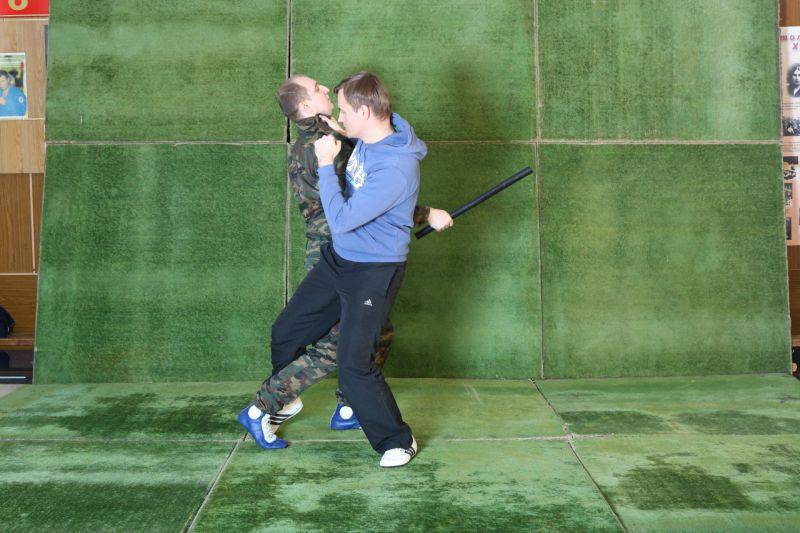 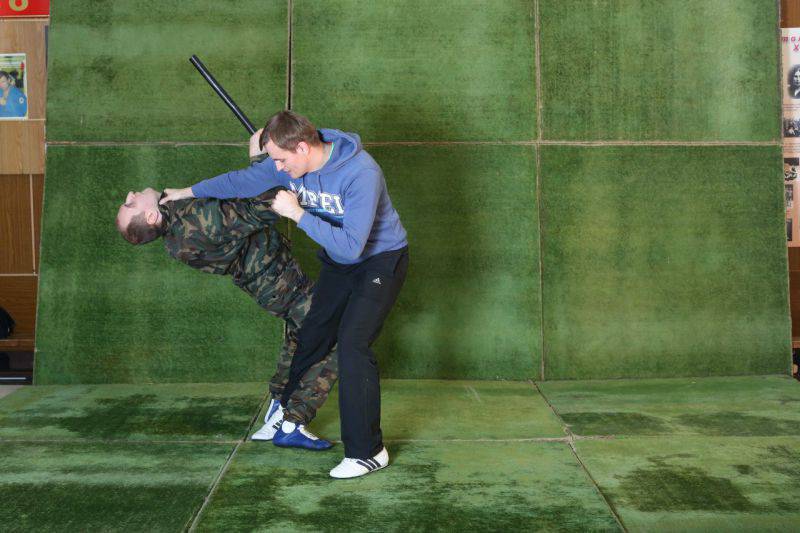 Naturally, it is necessary to learn the movement, breaking it into 3 phases. First, simply remove your hands with a weapon, and only then, after working on a reflex removal, proceed to further action (seizure of the throat, palm strike). The third phase - the holding of the back footboard, followed by finishing.

2. The first stands with a stick at the ready. It can strike only in horizontal projection (from oneself and towards oneself). The beat must also be in full force and at full speed. The second stands, leaning forward slightly, as if luring a blow at himself. At the signal, the first strikes, the second must swing back and, having caught the moment when the stick flashed past, sharply jump forward, fixing the arm with a weapon and a blow — a strike with a fork and a throat catch, for example. Here you can add a knee kick in the groin. Or hold the backrest after seizing the throat. The movement is also performed in both directions. The important point is that you need to pre-calculate the distance so that when the second one is in the extreme position (recoiling back), the stick whistles literally an inch from his face - the blows must be applied below eye level. To have a sense of danger and develop a sense of the border between a safe distance and a dangerous one. 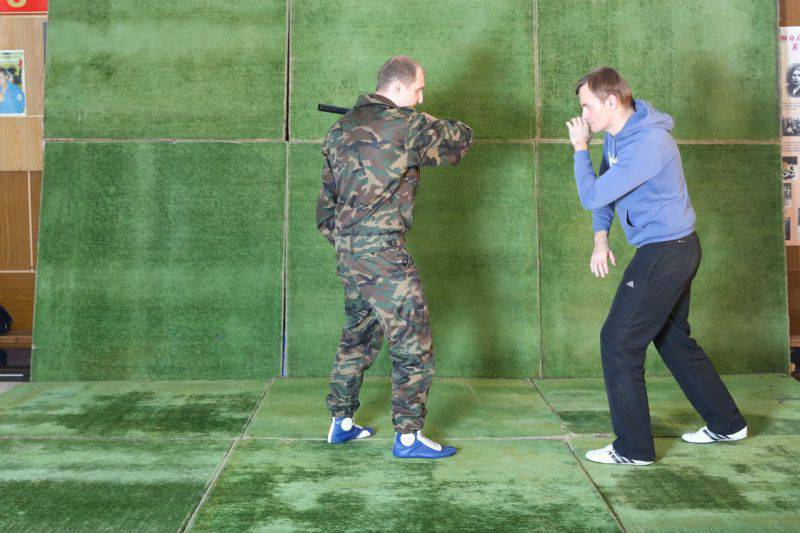 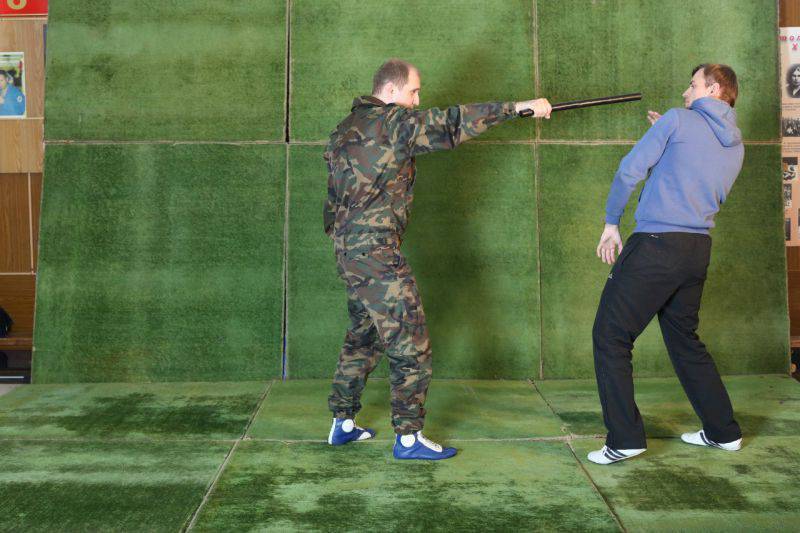 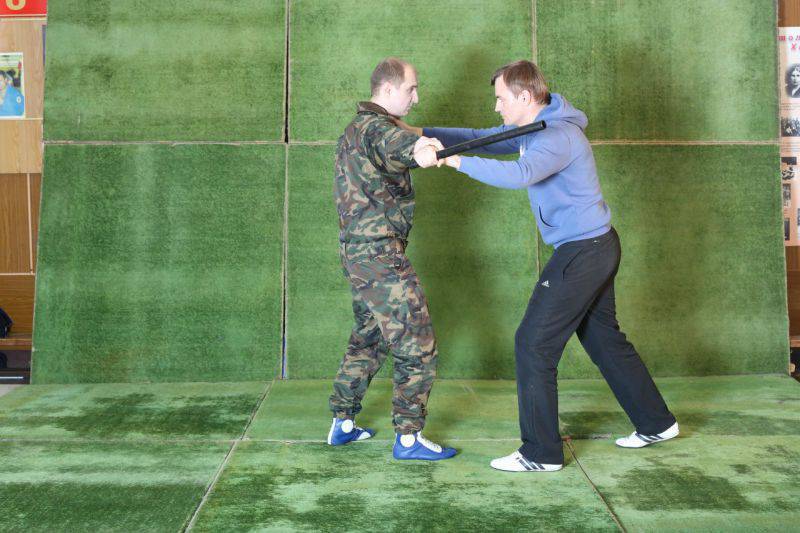 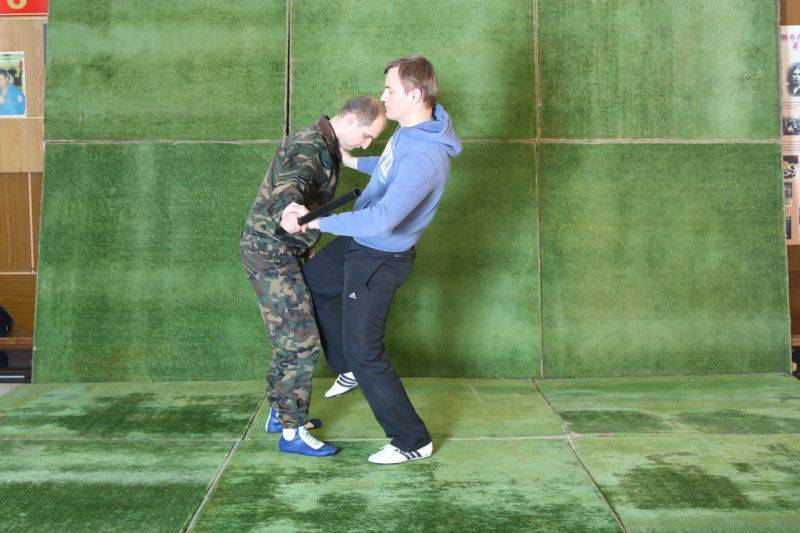 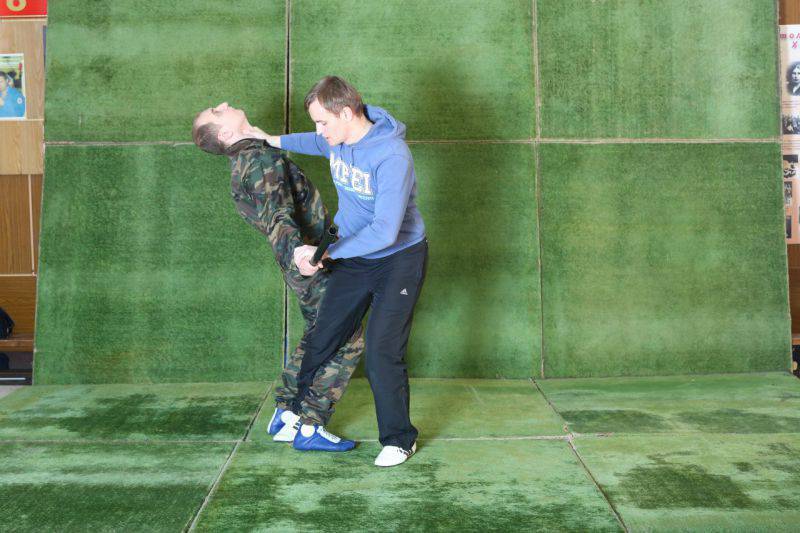 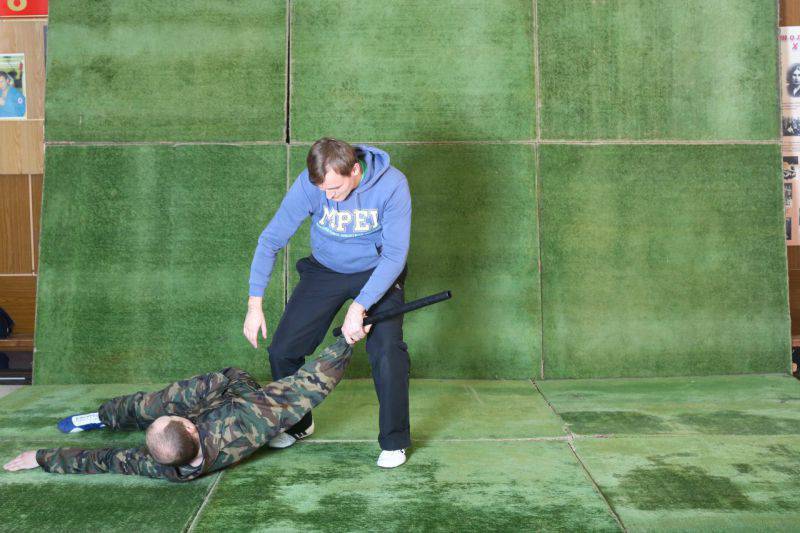 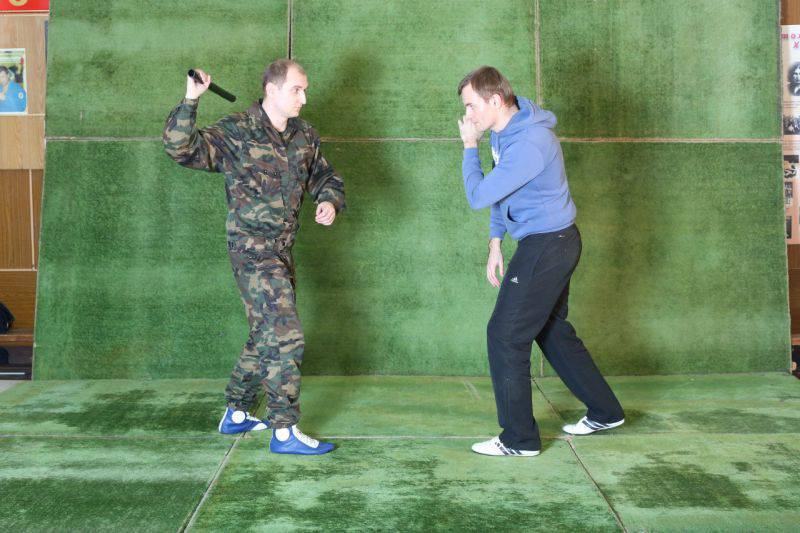 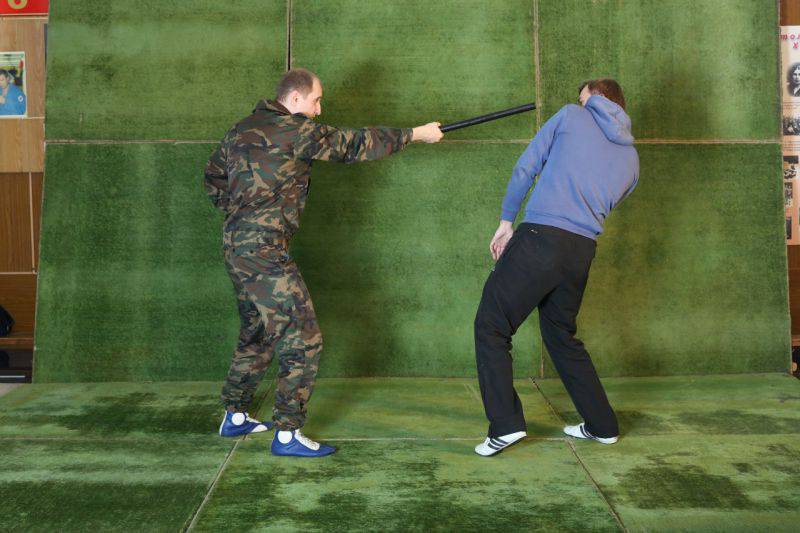 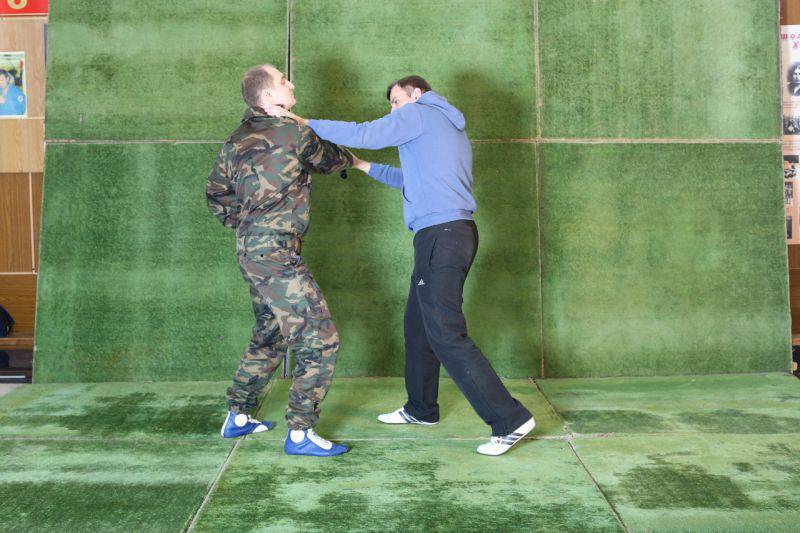 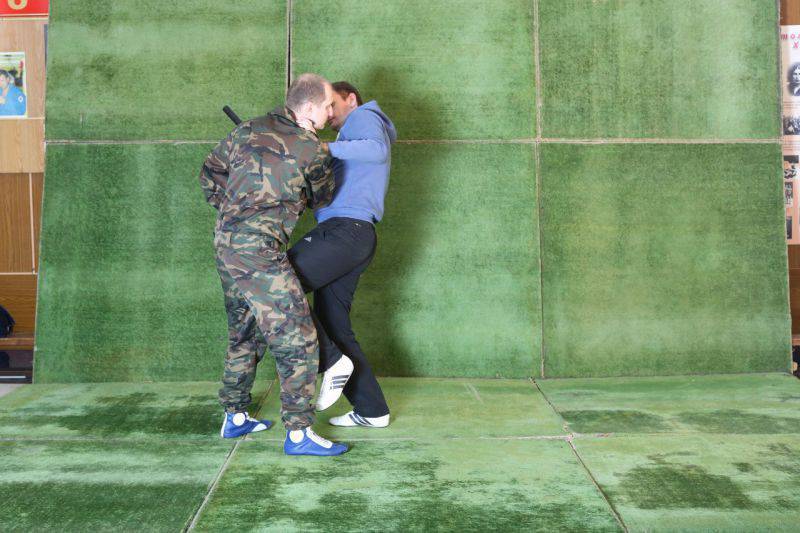 - In the old days in Russia, apart from combat, a wall-to-wall existed and a stick fight - when two groups of opponents converged, holding sticks in their hands. Later this species was banned due to its particularly high trauma.
Similar historical types of massive clashes with wooden sabers (and death) are known among the Bulgarians.

- Such fights could not be better prepared for hand-to-hand fighting in its true sense - a fight between two groups of armed people, with one hundred percent death for many participants.

- It is believed that the Russian struggle "for the knob", where the fighters make a preliminary grab for clothes in the neck, and cannot act with the second hand (in some cases only at the moment of the throw), and throws with their feet, was one of the options for preparing the canine (hand-to-hand) fight. The unused hand should have been a weapon, so it was necessary to learn to do without it. In close combat, close when it was impossible to make a swing with an ax or a sword (stick), sometimes only a struggle could help bring the enemy down to the ground.

- In 16-17 centuries. in Holland, the use of a cane rather than a knife to resolve a conflict was the hallmark of a good citizen. The use of a knife in a fight guaranteed at least serious wounds and criminal punishment, while with a cane it was possible to simply knock the knife out of the hands of the “marginal”.

Ctrl Enter
Noticed a mistake Highlight text and press. Ctrl + Enter
We are
Sapper shovel for urban self-defense (part 1)My humble experience (survival instruction)
33 comments
Information
Dear reader, to leave comments on the publication, you must to register.