Pacific campaign of the United States for preferences for American corporations

October 8 2015
18
Last Monday, the trade ministers of twelve countries - Australia, Brunei, Vietnam, Canada, Malaysia, Mexico, New Zealand, Peru, Singapore, USA, Chile and Japan - signed a final Trans-Pacific Partnership agreement (TTP) at a meeting in American Atlanta Partnership). World publications have noted this event with loud headlines about “the largest breakthrough in international trade in recent decades”. What blessed columnists were delighted about, readers are not entirely clear, since the content of the contract is still shrouded in mystery. As the US trade representative in the rank of Minister Michael Froman acknowledged, “The United States is not ready to publish the text of the Trans-Pacific Partnership Agreement, this will be done after the completion of the“ technical work ”. 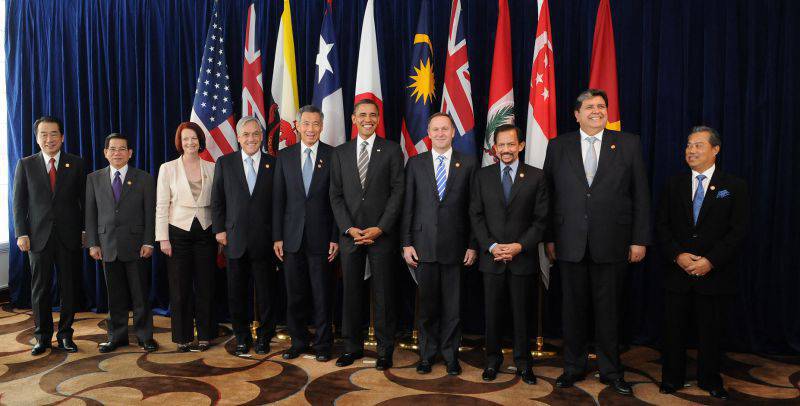 In a strange monastery with its charter

Nevertheless, based on information leaks when drafting the treaty text, the formation of a Pacific partnership is actively discussed by politicians and experts. The initiative to create a new international trade association in the Pacific region was announced as early as 2005. Initially, an agreement providing for the almost complete abolition of customs duties between its participants was concluded by Chile, New Zealand, Brunei and Singapore. Soon they were joined by the United States. Evil tongues say that the Americans were quick to take the place of China, to which the initiators of the treaty were somewhat wary, given the size of its economy and its export character.

Later, the United States joined the process of its main allies in the region. The number of partnership members has grown to twelve. Together they began to improve the TTP agreement. True, according to American patterns. President of the USA Barack Obama frankly said this at a ceremony in Atlanta: “When more than 95 percent of our potential customers live outside our borders, we cannot allow countries like China to write the rules of the global economy. We have to write these rules, opening up new markets for American products. ”

This did not suit all US partners in the region. We did not have time to dry the ink on the signatures under the agreement, as Japan supported the accession of China to the Trans-Pacific Partnership. At a press conference at his residence in Tokyo, Prime Minister Shinzo Abe said: "If China takes part in the TTP in the future, this will be of great strategic importance, and will contribute to strengthening the security of the region."

The thoughts of the head of the Japanese government go beyond a simple economic partnership. Not alien to the Americans. Only their ratings are somewhat different. Back in April, US Secretary of Defense Ashton Carter said that as China and India grew, which Washington, he said, would welcome, the United States "must maintain its presence in the APR, because it will give confidence to many in this region." According to the head of the Pentagon, the Trans-Pacific Economic Partnership is part of this strategy and is in the interests of the parties involved.

Nevertheless, the main message of the partnership is economic. As the RIA "News", At his press conference, Shinzo Abe expressed the hope that" thanks to the TTP, our life will become richer. " This hope of the project participants is supported by many years of propaganda by experts from the American government. The benefits that TTP member states will receive are even specifically explored at the East-West Center Hawaiian Institute. Its experts positively evaluated the participation in the project and calculated that by 2025, the GDP of the countries involved in the partnership, thanks to the capabilities of the new organization, will grow by 225 billion dollars.

The figure, of course, is not all good (the total 0,9 percent to the current total GDP), but it carries a positive charge. It is exploited, fueling interest in the project. Little attention is paid to the skeptics ’arguments. They have somewhat different calculations. For example, experts at the Canadian Institute of CD Howe Institute expect GDP growth of just 74 billion dollars, moreover, only by 2035 year.

The most consistent critic of the Trans-Pacific Partnership is the well-known American scientist, Nobel laureate in economics Joseph Stiglitz. He is no longer taken by the calculations of possible benefits, but by the fact that the free trade agreements that the Barack Obama administration is promoting put private companies above government regulation. “These treaties go much further than trade, investment or intellectual property. They lead to fundamental changes in the legal, judicial and regulatory structures of states. At the same time, these agreements can neither be influenced nor controlled by democratic institutions. ” Another economist, former US Assistant Secretary of the Treasury (1981-1982), echoed Stiglitz: Paul Roberts: “Washington’s goal, which it follows when promoting the Trans-Pacific Partnership, is to preserve its financial and economic superiority. The second reason is in Western corporations. Because this trade agreement will allow transnational companies to be above the law of the countries in which they operate. ”

Joseph Stiglitz noticed that new partnership projects are not equal: their conditions are dictated by the United States. Even at the preparatory stage of the TTP agreement, he wrote: “You will hear a lot of talk about the importance of the TTP for“ free trade ”. In reality, this is an agreement to establish control over trade and investment relations of the countries participating in the partnership. ” In confirmation of the words of the Nobel laureate, one can cite an assessment of the agreement on the TTP of the President of the United States. Barack Obama said that the Trans-Pacific Trade Partnership eliminates in other countries more than 18 thousands of taxes on goods from the United States and "will help ordinary Americans go forward." The last statement is actively disputed by J.Stiglits and his associates. In their opinion, the beneficiaries (main beneficiaries) of the new regional partnership will be large American corporations.

Behind the scenes of the World Trade Organization

Despite the secrecy of the negotiations that preceded the signing of the treaty, the understanding of its content was developed not only by the expert community, but also in political circles. I remember back in May, speaking in the framework of the “government hour” in the Federation Council, Russian Foreign Minister Sergey Lavrov expressed concern that the United States, forming the Trans-Pacific Partnership, can “voluntarily or unwittingly“ lead the matter to degrading the universal principles of the WTO so that the center of gravity is transferred to such narrow formats. ”

On this same September 28 from the rostrum of the 70 session of the UN General Assembly in New York, said Russian President Vladimir Putin. He urged not to allow the rewriting of the rules of world trade by individual countries.

The concerns of Russian leaders are easy to understand. In addition to the Trans-Pacific Partnership, the Americans are preparing another Transatlantic - with Europe. China is creating its Comprehensive Regional Economic Partnership (EPEA). Similar projects are being discussed in other parts of the world - for example, Latin American countries are developing their own free trade zone, an integration project has emerged among the countries of the Persian Gulf, and a project on free trade between Africa and Latin America. The global trading space is turning into a patchwork blanket of regional protectionism, which impedes the movement of goods, services, and capital from other countries.

However, these centrifugal trends have already appeared within the framework of the current World Trade Organization. It is no accident that ten years ago, Chile, New Zealand, Brunei and Singapore decided to unite their markets, to protect them from protectionism, which was rapidly progressing in the framework of the WTO.

The World Trade Organization, established in January 1995 on the basis of the General Agreement on Tariffs and Trade (GATT) in force since 1947, was conceived as a structure that provides for the liberalization of international trade and regulation of the trade and political relations of the member states. However, from the first days of its existence, the dictates of strong and rich countries manifested themselves in it, promoting their economic interests at the expense of weak or re-entering the WTO.

Rich countries do not hesitate to protect their markets with customs tariffs, quotas, sanctions. Especially skillfully uses this European Union. Experts felt that in some years (depending on the economic situation), the EU introduced restrictive measures up to 150. Even the United States cannot crack the largely closed EU market. Now they are trying to do this through the free zone of the Transatlantic Partnership.

The European Union is not alone in the power promotion of its products. This phenomenon has become quite widespread. Only to support their agriculture, consumers and governments of rich countries annually spend up to 350 billion dollars. Experts joke: “This amount is enough to pay one and a half round-the-world air travel first class for their entire 41-million dairy cow population.”

In recent years, the economies of developing countries have grown, the balance of interests has changed. Economists and politicians are seriously talking about the urgent reform of the international trade system, more liberalization of its rules. Instead, the market of the planet began to split into free zones, various partnerships and associations.

... The Trans-Pacific Partnership Agreement has yet to be ratified by the parliaments of the participating countries. Before it takes action, the details of the projects will be fully revealed. Perhaps then a complete understanding will come of the fact that the United States is leading the matter today to breaking up the established international trade system. Their obvious goal: to ensure that the market for goods was only one right - the right of the strong. That is how they already act in the arena of international politics ...

We are in Yandex Zen
Carabinieri case. Public Security Forces in Chile
Lion City - Half a Century of Independence of Singapore
18 comments
Information
Dear reader, to leave comments on the publication, you must to register.