October 12 2015
138
I wanted to finish the theme of the Trojan War (there were only chariots, ships and the notorious “sea peoples”), as active users of the Alliance pointed out a number of circumstances that simply obligate me to continue this topic. First, with a sufficiently complete presentation of factual material based on archaeological finds, the “people” wanted to learn about the tactics of use and especially the effectiveness of certain types of weapons Mycenaean era. It is clear that such a science as historiography cannot directly answer this question, and answers only through the work of some authoritative authors. Secondly, there was a controversy regarding the actual technology of bronze. Someone thought that a bronze rapier was heavy like a five-liter container with water, someone claimed that bronze was not forged, in a word and it took the opinion of experts in this field. Others were interested in shields, their design, ability to resist the blows of bronze weapons and weight.


That is, it was necessary to turn to the opinion of reenactors, moreover, authoritative people, “with experience”, who could confirm something by experience, and refute something. My acquaintances of the foundry workers of the bronze figures did not fit in this case: they are artists, not technologists, and they don’t know the characteristics of working with metal, and they almost don’t do any weapons. And I needed people who had access to famous museums and their collections, working on their artifacts, custom made replicas. The quality of their work (and reviews of it) should have been appropriate - that is, the opinion of the “cabinet historians” regarding their products should have been high.

Modern replicas of bronze swords: at the top of the sword of type H and at the bottom of type G.

After a long search, I managed to find three experts in this field. Two in England and one in the United States and obtain permission from them to use their text and photographic materials. But now the regulars of the VO and just its visitors get a unique opportunity to see their work, get acquainted with the technologies and their own comments on this interesting topic. 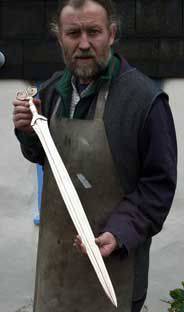 Neil Burridge with an "antenna sword" in his hands.

To begin with, I will give the floor to Neil Barridge, a Briton who has been involved in 12 bronze weapons for years. He considers the worst insult for himself when “experts” come to his workshop and say that they would make exactly the same sword on a CNC machine twice as fast and, accordingly, at half the cost. "But it would have been a completely different sword!" - Neal answers them, but not always convinces. Well, they are stupid ignoramuses in England as ignoramuses and nothing can be done about it. Well, seriously, he shares the opinion of the nineteenth-century English historian. Richard Burton, that "история the sword is the history of mankind. " And this is exactly how bronze swords and daggers created this history, becoming the basis, yes-yes, the basis of our modern civilization, based on the use of metals and machines!

Sword type CI. The length of 74, see. The weight of 650. As you can see, the "rapiers" of that time were not at all heavy and, therefore, they could be completely fenced. And in general, bronze swords were not heavier than iron ones!

Analysis of the findings shows that the most ancient "rapiers" of the XVII and XVI centuries. BC. were the most difficult if we consider the profile of the blade. They have lots of ribs and grooves. Later blades are much simpler. And this weapon is piercing, because the blades had a wooden handle connected to the blade with rivets. Later, the handle was cast at the same time as the blade, but very often, according to tradition, the bulging heads of rivets on the guard were preserved, and the guard itself was the holder of the blade!

Swords were cast in stone or in ceramic forms. Stone was more difficult, and besides, the sides of the blade were slightly different from each other. Ceramic could be detachable, and could be integral, that is, work on the technology of "lost form". The basis for the form could be made of wax - two completely identical halves cast in plaster! 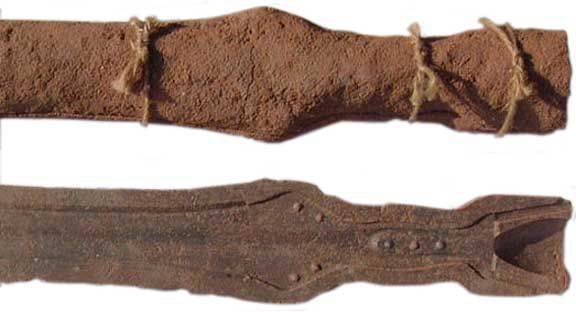 Copper (and Homer Greeks did not distinguish bronze, for them it was also copper!) The alloy used in later swords (in the early ones that just didn’t exist!) Consisted roughly of 8-9% tin and 1-3% lead. It was added to improve the flow of bronze for complex castings. 12% tin in bronze is the limit - the metal will be very brittle!

As for the general direction of the evolution of the sword, it definitely moved in the direction from the piercing sword of the rapier to the chopping leaf-shaped sword with a handle that is a continuation of the blade! It is important to note that the metallographic analysis shows: the cutting edge of the blade of bronze swords was always forged to increase its strength! The sword itself was cast, but the cutting edges are always forged! Although to do this without damaging the numerous edges on the blade, it was clearly not easy! (Those who wrote about this in the comments - rejoice! It was exactly that!) Therefore the sword was both flexible and hard at the same time! Tests have shown that such a leaf-like sword with one blow is capable of chopping a five-liter plastic container with water in half with an impact diagonally!

What does a sword look like that comes out of a mold? Poorly! This is how it is shown in our photo and it takes a lot of time and effort to turn it into an eye-pleasing product!

Removing bald, proceed to grinding, which is now performed using
abrasive, but in that distant time was made of quartz sand. But before polishing the blade, remember that at least 3 mm of its cutting edge must be well forged! It should be noted that only a few swords of that time were completely symmetrical. Apparently, the symmetry of a large role in the eyes of the then gunsmiths did not play!

This is what a blade with all the details prepared for the assembly looks like. Now all this needs to be combined on rivets and to think about one more thing - regular cleaning of the blade, as the polished bronze fades from the slightest touch of fingers.

Author's remark: It's amazing what zigzags our life moves! In 1972, in his first year at a teacher’s college, he became interested in Mycenaean Greece and Egypt. I bought two fabulous albums with photos of artifacts and decided ... to make myself a bronze dagger modeled on the Egyptian one. He cut it out of a bronze sheet with a thickness of 3 mm, and then as a convict sawed a blade with a file to obtain a sheet-like profile. The handle made of ... "Egyptian mastic" by mixing cement with red nitrolac. He processed everything, polished it and immediately noticed that it’s impossible to take up the blade with your hands! And then I saw that the Egyptian маст mastic ’was blue (they considered red as barbaric!) And I immediately disliked the dagger, despite the abyss of work. I remember that I gave it to someone, so, most likely, he still has it at someone in Penza. Then he made a bronze mirror to his future wife, and she really liked it. That's just to have to clean it well, very often. And now, after so many years, I again turn to the same topic and write about it ... Amazing!

The parts of the wooden handle on a metal base on rivets are fixed and this is a laborious and responsible operation, because if the wood is fragile (in this case, you need to use elm, hornbeam or beech), then with a hammer blow it can be easily damaged!

The finished sword is by Neil Barridge.

It is clear that Neil tried to reproduce if not the entire typology of Sandars' swords, then at least the most impressive specimens from it.

Fully finished sword type G with a "horned crosshair." The price of the blade 190 pounds, and a fully worked sword with a golden ring on the handle will cost you 290!

The sword of the classical type Naue II of the late Achaean era, spread throughout Europe.

The author is grateful to Neal Barridge (http://www.bronze-age-swords.com/) for the provided photos of his works and information. [Left] [/ left]

We are in Yandex Zen
Once again to the question of the reconstruction of the armor of the era of the Trojan War. Warriors with Shields (part 11)
The Trojan War and its reconstruction (seventh part) - ending
138 comments
Information
Dear reader, to leave comments on the publication, you must to register.