Project "ZZ". The purpose of the West: from Assad to make Yanukovych, and Syria to turn into a "second Afghanistan"

October 7 2015
47
The Russians are in Syria because, according to American analysts, Putin urgently needs an image of an external enemy, otherwise Russia will disintegrate. Moscow’s defense of the “loser” Asad’s Western media explains that the Kremlin cannot do without the “information drug”. President Obama is wary of getting a “new Afghanistan” in Syria. Better in a protracted war, Putin will get stuck. The Western press also believes that Russia has moved the “hybrid war strategy” from Ukraine to Syria. According to some political observers, significant Russian ground forces will go to Syria, who will fight on behalf of Assad, officially denying their actions. 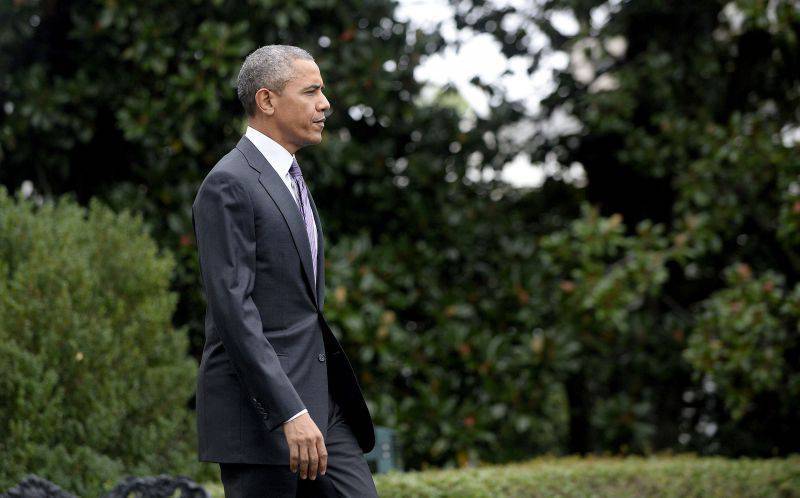 The President of the United States is walking on the South Lawn at the White House. October 4 2015 of the year

On the other hand, President Obama’s actions in Syria already show that he has learned from the wars in Iraq and Afghanistan.

Obama believes that "no amount of US military" will solve the problem of those who are not able to live peacefully on their land.

“We will find ourselves in the position of those,” said the President of the United States recently, “who does so little that there is no point in it and loses trust.” Either we got into the situation deeply ... and we cannot stand it. "

Obama predicts that “an attempt by Russia and Iran to support Assad” and return peaceful life to the population of the region will lead to the linking of Moscow and Tehran in the quagmire of war. The Russians will act there for a while, “unless they choose another course.”

Obama's critics do not believe that the United States is the right way - inaction. Senator John McCain, in his last Senate speech, described the Obama administration’s Syrian policy as “erroneous” and “overly cautious”. According to him, the president preferred “the risk of inaction” to “at risk of action”.

Mr. McCain believes that "Vladimir Putin is now rising to the ruins of the Middle East policy of this administration."

The author of the material, Walter Pincus, objects to McCain, drawing a parallel between the situation in Ukraine and Syria.

It is Putin’s policy that will turn Syria into ruins, the columnist believes. As in the 2014 year, when Putin supported the then President Viktor Yanukovych, today the Russian president is trying to maintain the power of the “loser” Assad. This is easy to explain: Moscow’s support for the “dictators” Asad family dates back to the days of the Cold War, when Damascus was firmly friends with the Soviet Union. From the very beginning of the Arab Spring, Putin supported the B. Assad regime in Damascus: Russia blocked the first two United Nations resolutions (May and June of 2011), which condemned the Syrian government for using force against its own civilians. Since then, Russia "continues to supply weapon and send military advisers to the Syrian regime, ”the journalist writes. The likelihood of an ally’s collapse prompted Putin to recently intervene in the conflict, sending Russian air and ground forces to Syria “to protect Assad.”

According to the correspondent, "despite what Obama critics say," Putin is unlikely to act "from an excess of force." Putin is weak, the columnist believes: he has “financial problems” at home. Yes, and oil prices have long fallen. And no one canceled the sanctions.

At the end of the article, Pincus cites the opinion of a potential US presidential candidate, Donald Trump. His forecast appears to the author of the article worthy of attention. On the NBC television channel, in the program “Meeting with the Press,” D. Trump predicted that Putin would “get bogged down” in Syria and “leave a fortune there.” And Putin "will beg to be allowed to leave."

German historian Karl Schlögel interviewed in the newspaper "Der Tagesspiegel", admits that Putin needs Syria only to make the West understand: Moscow wants Washington and Brussels to forget about Ukraine, and then the Kremlin will start negotiations with them on Syria.

According to the historian, “the appearance in the UN of Putin was incredibly well prepared, organized just masterly”. At the UN General Assembly in New York, Putin "wanted to show everyone that he is the master." However, Schlegel has “serious doubts” that the Russian president is indeed “seeking to resolve the conflict in Syria.” He simply "helps Assad," the culprit in the "catastrophe."

Putin, according to the historian, gives the West a definite message: do you want to discuss the war in Syria with me? Then forget about Ukraine!

Europe is in a very difficult position due to a wave of migrants and refugees, reminds the expert. And Putin used this situation to "exert pressure." In the Russian media is full of "gloating" over Europe.

As for the conflict in Ukraine, the historian said the following: Putin, while implementing his plan, knew that the North Atlantic Alliance was not ready to participate in the conflict. Creating conflicts that “can be shortened or tightened, if necessary,” and then the phenomenon of “knights in shining armor” ready to save everyone — that’s where Putin is “really professional,” said Karl Schlegel.

Does Putin's aggression mean a lot? The historian believes that "we must be ready for anything." After all, Putin does not have a "positive program" to remove his country from commodity dependence: Russia in the world is just a "supplier of oil and gas." The expert is sure: Putin has lost the last decade. Putin is not the leader, he is a slave who dared to “take the bull by the horns,” and this is “dangerous and risky” - both for the entire planet and for Russia. Putin constantly needs "the ghost of an external enemy" to keep the country from falling apart.

Joshua Keating in the newspaper "Slate" writes that Vladimir Putin denies the possibility of sending Russian ground forces to Syria, but “one of his main military advisers” acknowledged that “on a voluntary basis” ground forces could join the fight.

US military officials believe that about 600 Russian military personnel (not counting flight crews) may already be in the country. Tents for more than 2000 people were spotted on the territory of the Russian air base in Lattakia.

The concept of “volunteers,” the author writes, is familiar to the West since the beginning of the war in Ukraine, when Russian commanders claimed that thousands of Russians, including military contractors, were not sent there, but preferred “to spend their holidays not on the beach, but in trenches Donetsk ".

Similarly, Putin denied that the Russian security services played a role "in the annexation of the Crimea."

Now Russia is implementing the strategy of "hybrid war" in Syria. Here the Kremlin also refuses everything. Russia, it seems, will soon send a large number of its ground forces to the war for Bashar Assad, the observer believes, but does not officially recognize this.

So, let us add from ourselves, in Europe and the United States, many believe that Russia in Syria has two main goals: firstly, to help the “Assad family” to stay in power; secondly, to make the West more compliant in the Ukrainian question.

As for Washington’s strategy, Obama’s critics, who insist on the indecisiveness of the White House’s administration, nevertheless understand that the president has learned from the wars in Iraq and Afghanistan, but Russia may get bogged down in the Syrian war.

It is likely that the owner of the Oval Office has aimed precisely at such an outcome of the second presidential term.

Imagine Obama at the mirror. He admires his profile and thinks: “It would be nice if the Russians got a second Afghanistan. When I left the White House, I would have told Senator McCain: Well, have you eaten an old man? ”

Ctrl Enter
Noticed oshЫbku Highlight text and press. Ctrl + Enter
We are
Situational analysis of the death of the MH17 flight (Malaysian Boeing 777), made on the basis of engineering analysis from 15.08.2014Syria: Americans scare themselves, and Asma Asad buys chairs
Military Reviewin Yandex News
Military Reviewin Google News
47 comments
Information
Dear reader, to leave comments on the publication, you must to register.