Tricky comments. See Paris and nothing else

October 7 2015
26
On October 2 in Paris, the Norman Four, composed of Angela Merkel, Francois Hollande, Petro Poroshenko and Vladimir Putin, discussed the situation in the Donbas and ways to resolve the conflict. As a result of the five-hour negotiations, it was decided to divert weapons from the contact line, to develop a mechanism for conducting elections in the occupied territories, to cancel the elections in Donbas - to actually extend the validity of the second Minsk agreements. In Ukraine, the contract Poroshenko and Putin criticized, in Russia approved, and in the West overshadowed. Syria has clearly eclipsed the topic of Donbass.


On this, in general, everything. Many media in different countries paid enough of their attention to what was happening in Paris. But the biggest interest was caused by how they accepted President Poroshenko at home.

VRU deputies, from Groisman to Lyashko, demanded Poroshenko and Klimkin a detailed report on the work done.

But in short, the essence of all performances can be reduced to one question: "Sing, why did you fly there?"

The question beat in the throat with a kick, and Poroshenko could not answer it properly. And he released into the battle arena authorized by the President of Ukraine for the peaceful settlement of the situation in the Donetsk and Lugansk regions, the deputy from the BPP Irina Gerashchenko.

That one also had nothing to say, so I had to improvise. That is, by the essence of Ukraine, just lying. Maybe a ride.

It turned out, according to Gerashchenko, the Ukrainian delegation led by President of Ukraine Petro Poroshenko at the negotiations of the "Norman Four" in Paris managed to reach agreements not only on assignment tanks and heavy 100-mm artillery, but also about the withdrawal from the Donbass of Russian armed forces. Well, I’ve got the full program.

But when, from where and in what quantities Russian armed forces will be withdrawn, Gerashchenko could not say. Agreed - it means they will withdraw, period. Putin has nowhere to go, under Hollande and Merkel agreed.

Spoke Gerashchenko a lot, and with a twinkle. The fact that the summit of the heads of Ukraine, Germany, France and Russia has become another round of hard pressure on Russian President Vladimir Putin in order to force him to act exclusively in the wake of the Minsk agreements. Putin, he said, grumbled, smirked, and pretended that he was capitulating now under this pressure.

Putin was good. He did not sign the Minsk agreements. He, too, came to see the Paris.

Gerashchenko also posted on her Facebook page an infographic in which 14 points were described in detail, which Ukraine defended in Paris, despite fierce resistance from Russia. Here it is, the creation of Ukrainian hands and minds. 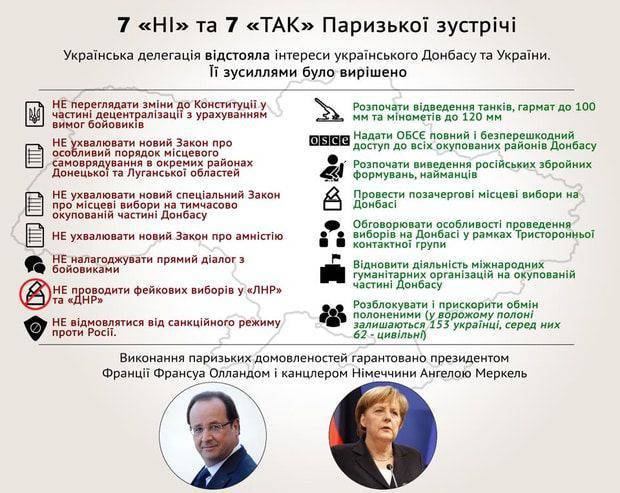 - achieve the withdrawal of all types of weapons with a caliber of up to 100 mm and mortars up to 120 mm;
- granting the OSCE unimpeded access to all occupied areas of Donbass;
- the withdrawal of all Russian troops and mercenaries;
- holding extraordinary local elections in the region;
- discuss the peculiarities of elections in the Donbas in the framework of the Tripartite working group;
- resume the activities of international humanitarian organizations;
- unlock the issue of accelerated exchange of prisoners of war. 153 Ukrainians are still in captivity, among which 62 are civilians and the rest of the military.

- Changes on decentralization in the Constitution will not be revised to meet the requirements of terrorists;
- there will be no law on the special status of local government for some areas of Donbass;
- the amnesty law will not be revised;
- there will be no direct dialogue with terrorists, as Russia wanted;
- fake elections in the territories controlled by the “DPR” and “LPR” territories were canceled;
- all the sanctions previously imposed against the Russian Federation are upheld.

This is how Peter Light Alekseich worked! He fought with Putin, not sparing his body! All items defended!

Where are there any "Minsk agreements"? In the furnace stories! Here, here you are, new, Parisian! All for Ridny Ukraine, all for victory!

That could be puzzled, how is it so? We need to talk about the implementation and prolongation of the Minsk agreements, and here such a turn ... Not just a turn, but an epochal one, frankly.

But they didn’t have time to properly "digest" everything they heard and read, as the one who spoiled everything was found. And who do you think? That's right, Poroshenko. While Gerashchenko was foaming at the mouth of the great Peremogh, which would finally put in place and completely let out Putin, and his tame terrorists in the Donbas, the President suffered to the masses. That is, in the media.

And Peter Alekseich gave an interview. It was very reckless, naturally, but at the end, Mr. President issued such that it crossed out his entire speech. And the performance of Gerashchenko too.

"No agreements were signed in Paris. We discussed in Paris in Norman format the dates and steps for the implementation of the Minsk agreements ... But there are results," he said.

That is, everything that Gerashchenko narrated is another nonsense? Alas, it is. We don’t have to get used to it, but here it should be offensive to some people there. All these 14 points of great peremoga are nothing more than Gerashchenko's fantasy. Well, it is necessary to justify the money spent on a trip?

No, it is quite possible for myself that Peter Alekseevich voiced all this. Quite possible. He did not push this from the podium at the UN. Another question is, has anyone heard this, or has all this peremeshna nonsense just been in Gerashchenko's head?

Well, at least saw Paris for free. But, dear you are ours, Paris is Paris, but still Minsk is that reality from which you cannot escape. Yes, you can temporarily sink it. In strong, fortified and slightly diluted products. But anyway, sooner or later you will have to perform.

And the deputies of the Verkhovna Rada should take a closer look at what they are working on at the front of the war with Russia for a bright future. Painfully, they lie lately. As if the side did not work.

Paris, of course, is a beautiful city. But Minsk is quite a handsome man too. So "nothing" in Paris should turn into "at least something" in Minsk.

And stop talking about how Putin was "bent" in Paris. This is all a dream. But he can be offended. What then will you do, gentlemen deputies?

Ctrl Enter
Noticed a mistake Highlight text and press. Ctrl + Enter
We are
Ukraine changed the government. What to expect from the Groysman cabinet and what does Saakashvili have to do with it?Tricky comments. Again the old American record!
26 comments
Information
Dear reader, to leave comments on the publication, you must to register.