October 9 2015
29
October 5 The 1918 of the year by the decision of the NKVD of the RSFSR in the structure of the workers' and peasant militia created a new service - the criminal investigation department. Divisions of the criminal investigation were instructed to create in all cities with a population of more than 40 thousand people. One of the first large-scale cases of the Soviet detectives was the exposure of the gang of Mikhail Osipov, who entered history domestic crime under the nickname Kultipyapy. 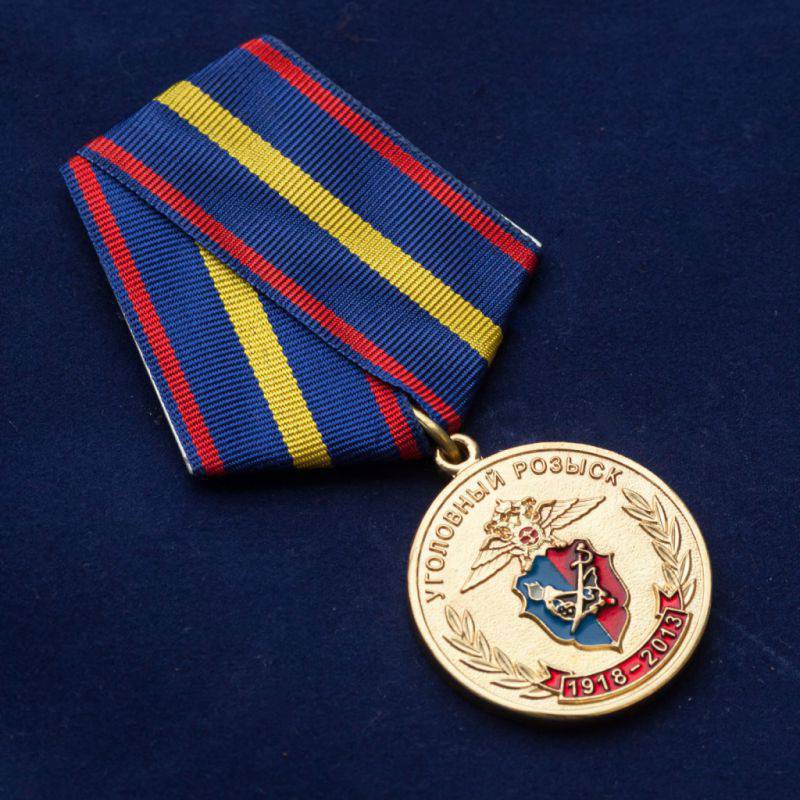 Medal for the 95 Anniversary of the Criminal Investigation
For a gang of Mishka Kultiapogo detectives in Moscow, Oryol Province, Siberia, the Urals, Bashkortostan, hunted for several years. His gang managed to inherit in many regions of the country. According to the Criminal Investigation Department, Klutapy and his henchmen committed at least 78 murders, as well as dozens of robberies at jewelry and thrift stores.

The raiders did not act at random, but according to a previously developed plan. When arriving in a particular city, the criminals stopped somewhere in the private residential sector or bought a house in the suburbs, in which they sat quietly, without attracting the attention of their neighbors. Having committed another robbery, the criminals quickly moved out and settled somewhere in another inconspicuous shelter. That is why the police for a long time could not get on the trail of criminals. And only in September, 1923, in Ufa, did the detectives manage to take Kultiapogo himself and his accomplices in the act. Here is how it was.

In one of the September days of 1923, five criminals broke into the commission shop of the entrepreneur Razuvaev, well-known in Ufa. In the store at that moment were the owner himself, the sellers and three buyers. Pointing the revolvers at them, the gangsters told everyone to lie down on the floor, and then they silenced the victims and tied their hands behind their backs. While the bodies lay on the floor, forming a lively semicircle, the raiders eagerly grabbed gold and silver items. 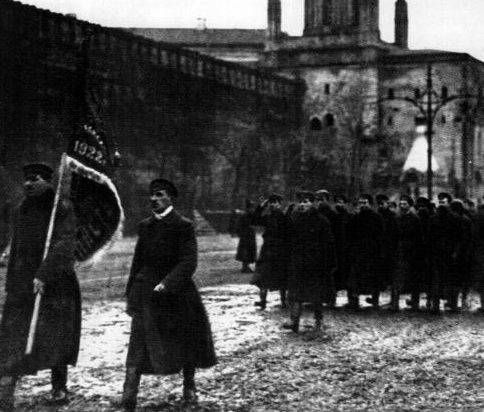 Employees of the Criminal Investigation of the Republic at the parade on Red Square. 1922 year
Suddenly the front door swung open with a noise, and the local priest stepped over the threshold of the commission. One of the bandits rushed to meet him. However, the father was not timid. After knocking down a gangster with a blow of a mighty fist, the priest ran out into the street and shouted:
- Sentry! Rob! ..

The raiders poured out of the store and tried to disperse into the crowd. But they failed. Accidentally, an agent of the Ufa Criminal Investigation Department Yakin was nearby. He caught up with one of the fleeing criminals and tied him up, and the citizens who came to the rescue to help the operative caught two more participants in the armed robbery.

Criminals seized with red-handed seized weapon and stolen valuables. Documents from the bandits did not have. Therefore, in order to establish the identity of the criminals, they quickly proceeded to a local threat-search. What were the surprise and delight of the operatives when it soon became clear that none other than Mikhail Osipov himself, who was an intellectual, aka Kultyyapy, aka the “king of bandits”, fell into the hands of the detectives.

A native of the village of Berezovo in the Perm province, Mikhail Osipov was the son of a peasant woman and a shoemaker. Coming from the lower classes, Mishka nevertheless managed to get a higher education before the revolution. However, Osipov's academic career did not deceive him, and he went into crime, quickly gaining prestige among criminals. In the criminal world, he was respectfully called the Intelligent.

Before the revolution, Mishka hunted thefts from shops and wealthy homes in Russia. Twice he was caught and sentenced to prison. After serving a term, Osipov invariably returned to his beloved craft.

After the revolution, nothing has changed. Only cruelty was added. If under the tsarist regime, Mishka stole and robbed, then under the new government he became addicted to murder. And he did it with a special atrocity. His favorite "entertainment" was the so-called fan. Having robbed his victims, Mishka tied them up with string and laid the doomed so that they formed a kind of fan: the legs of one victim lay on the legs of another, etc., and the bodies diverged at an angle. Moving from one victim to another, Mishka crushed the victims with the head of an ax. Apparently, because of the predilection of the gangster, he personally cut the skulls of his victims to him and the nickname stuck - Kultiapy.

The trial of the gangsters who were in Mishka Kultipyogo's gang was held in Moscow. Kultiapy himself, as well as his eight most active accomplices, received a “tower”. The rest went to mend in labor camps.

However, with regard to the leader, the court’s sentence could not have taken place: while the investigation was going on, Mishka tried to escape from prison. And he would certainly have escaped, if not for the vigilance of the Moscow detective Philip Varganov, who had been specially seconded to Ufa to carry out operational investigative activities in the Kultypyogo case.

From the report of Varganov to the head of the criminal investigation department of the republic:

“In the mountains. Ufa, I, with my colleague Comrade. Radchenko and the authorized secret of the URR comrade. Savich, arrived 16 th November / c. Immediately upon arrival, we established business contact with commander Bashcentrorozysk. Prokhorov. We decided to immediately drive to the Ufa Pravdom, to check the reliability of the guards and the conditions of Osipov-Kultipy, as I had serious concerns about the possibility of an organized escape. On the way to Prakdom, I instructed Inspector Kozlov on arrival at Osipov’s cell immediately and suddenly to search him. In a single cell Osipov Comrade. Kozlov, in our presence, proceeded to a personal search. Osipov quickly snatched a pack of notes from his pocket and began to stuff them into his mouth. Then I grabbed Osipov with one hand by the throat and the other by the hair and threw him on the bed. T.t. Kozlov and Prokhorov grabbed Osipov by the time, and began to take notes away. Part of the notes that Osipov left in her hands, with great difficulty, in a torn and wrinkled form, was taken away, and part of them that was in the mouth, despite the measures we took, was swallowed up by Osipov. The selected notes were written in pencil, partly with letters, and partly were encrypted with numbers. On scraps of a note written in letters, one could read the following phrases: “... Give 100 nice.”, “I’ll run Monday ...”, “... if you don’t agree, post it with a booze, but don’t ask ...”. From all this we understood that Osipov-Kultiapy was engaged in preparing an organized escape. ”

Naturally, Kultiapogo was immediately transferred to another cell and the reinforced guard was set. Meanwhile, detectives under the guidance of Varganov began to decipher the notes taken from Kultiapy. As a result of hard work, the text was recovered. The letter was addressed to Mishka's cohabitant - Shurka Nizkovskaya. In it, the “king of gangsters” wrote (the author’s spelling and style are preserved):

“Dear daughter. Kiss you 10.000 times. Daughter, I got a ksivu; Daughter, I was afraid to trust that person. You yourself know that this is not a joke, and you, probably, waited for him, and in vain. My daughter, my deeds are very nasty. Without the help of a cop, it’s absolutely impossible to leave, but you cannot trust him, although you can give him money in advance, and he will not help, but will only make it worse. My dear daughter, I'm going crazy here, I plan everything day and night. Daughter, this devil knows how strictly I am being held and monitored. I have to go like this: if the cop helps, then only one ment will have to spank in the fence, and the second one may not even have to, and I also don't have to spank the street, but if without the cop's help, then there will be four spank in the case and two in the fence, not counting the street yet ... ".

Then came specific instructions on what and how the accomplices should do. 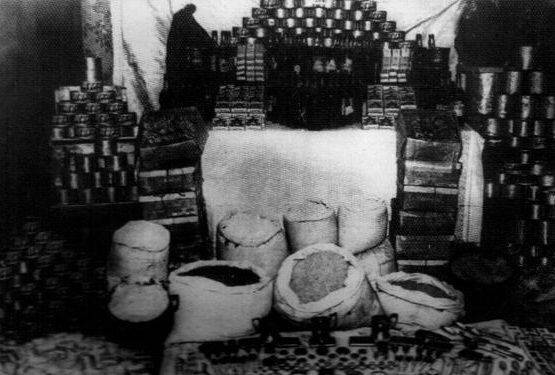 Values ​​seized from criminals. Beginning of 1920's
From the text of the message it became clear that the escape was being prepared, and one of the guards of the Ufa prison should provide Kutlypomu with substantial assistance in organizing it. Of course, the detectives were taken all the necessary measures. In addition, in three cells, in which the "king of bandits" was alternately held, Varganov conducted searches. In each of the cells they managed to find caches arranged by the prisoner. In one of them, two keys to the doors leading from the building to the prison yard, sealed with bread, were kept in a depression under the bed. In the other - an English gimlet, neatly hidden in the bumps on the wall. But what is most striking: a revolver and several cartridges for it were found in the wall, near the heating battery. Apparently, the “king of gangsters” with this weapon intended to “spank” cops if necessary.