Russian troops are returning to the Arctic. It is believed that to serve here is promising and even prestigious, although not easy. But those times have passed when the word “must” justified any deprivation. Experience has shown: a person works much better when he can return to a comfortable environment after work, where he is welcome to come and do not pester with complaints of domestic turmoil. Among other necessary conditions for this is the provision of garrisons with a sufficient amount of electricity. Where do you get it?

The Arctic is being cleaned from thousands of diesel barrels used to generate electricity. Unfortunately, there is no alternative to diesel generators yet. The only well-developed means of environmentally friendly generation of electricity - wind power - in the Arctic can be used very limited and problems in general, they will not solve. Solar panels in the conditions of the Arctic night is also not a way out. Dynamic quantum power stations mentioned in the article of the newspaper “MIC” (No. 26, 2015) may decide it, but in a rather distant future. And it is necessary now. 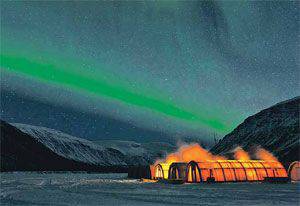 The solution is seen in the application of new type of power plants, close to the traditional ones. These include the Russian invention “Aerostatic Power Plant” - this is a wind power plant operating on an artificial air stream. To create it uses the potential energy of the atmosphere. No fuel or other energy costs are required.

Aerostatic power plant is a group of wind power plants located in series in a long tunnel. The exit of the tunnel passes into a vertical pipe, and the entrance is connected to an air intake, the cross section of which is larger than the sections of both the tunnel and the pipe. Between the inlet of the air inlet and the outlet cut, there is a difference in atmospheric pressure, respectively, a steady flow of air occurs.

It affects the wind generators located in the tunnel and they generate electricity around the clock and regardless of weather conditions. No fuel costs.

There is enough evidence of the efficiency of the scheme: cellar ventilation, fireplaces, natural ventilation of mines. The most interesting prototype of this invention is in the village of Direnkur in Turkey. It is a ventilation system of a multistory underground city, stretching for tens of kilometers and extending to a depth of 90 meters. The system consists of a large number of small-diameter mines connected by horizontal air ducts with several large-diameter mines. The upper sections of mines of small diameter are located with a significant excess in height above the entrances of the mines of large diameter. Thanks to this scheme, powerful air streams flow into the connecting shafts of small diameter with the shafts of a large air duct. On all floors and in every nook and cranny of the dungeon there is always fresh air. Who, when and why built this city in Turkey is unknown. By the way, there are similar cities in Ecuador and in the Urals.

The idea is to put wind generators in these streams and get around-the-clock power generation. Implementing it is technically quite simple. Even in the USSR, technology was developed for the rapid construction of high pipes, for example, from metal tape. Fold a tunnel of concrete or chipboard with the necessary lining - no problem. Some difficulties are the protection of the air intake from snow drifts. But this is not such a difficult task, it is only necessary to attach engineering thought to it. But what really requires an extraordinary solution is the wind power station located inside the tunnel. The use of traditional wind farms with a rotating transducer of the kinetic energy of the flow into mechanical movement is inefficient both because of the low productivity of the converters themselves and because of the harmful aerodynamic factors resulting from their rotation, resulting in a large loss of power when interacting with the tunnel walls.

The way out is the use of wind power stations with linear oscillatory working movement of the converter (WESK). It does not rotate and therefore is free from harmful aerodynamic phenomena and is not affected by the close proximity of the tunnel walls. The production of AEC is possible at any mechanical plant, it does not require scarce materials and components. Thanks to the simple design will be simple and repair.

In reality, an aerostatic power plant might look, for example, like this. The pipe height is 50 meters, the tunnel is 350 meters long, the cross-sectional area of ​​the pipe and the tunnel is 10 м2. Capacity - 20 MW, annual productivity - 175 200 000 kW / h. Of course, it is possible to build stations of both greater and lesser power - it all depends on the need. Permanent maintenance is not required, it is enough to have an automated control console. No noise, no harmful emissions, no dirty barrels around the village.

Saving money by reducing the amount of imported diesel fuel and coal is huge. The presence of a large amount of cheap electricity will solve the problem of growing on-site vegetables that people need and organize dairy farming. In the village you can break a winter garden with a swimming pool, solarium, sauna, playgrounds. Unemployed members of military families will get a good job. An additional contribution to saving money will be made by the pipe: antennas for various purposes, light beacons, loudspeakers, spotlights for lighting the village, and holiday lights to the joy of children can be placed on it. It can be given a beautiful appearance, and it will become an architectural decoration of the territory and a landmark for those who have lost their way in the tundra.

Placing a special aeroelectric power station near the aerodrome will allow to keep the runway and taxiways constantly free of snow and dry. This is achievable by laying heating elements under their coating. A large power consumption is not required - just keep the coating within the minimum plus temperatures. Moscow and some Scandinavian cities have a similar experience. It is clear that due to this the combat readiness will increase aviation parts and the possibility of air communication with the mainland.

There are prerequisites for solving the problem of economical supply of arctic villages with environmentally friendly electricity. The case for the implementation.

We are in Yandex Zen
Ostap Petrikovich Mask: Full Exposure of the Developments of the “Millennium Genius”
About Stalin and Khrushchev
30 comments
Information
Dear reader, to leave comments on the publication, you must to register.