The birth of missile carriers


55 years ago - September 10 of the year 1960 from the submarine of the 611VP project from the depth of 30 meters was the world's first launch of a ballistic missile with a liquid-propelled jet engine. And on November 12, the first Soviet nuclear submarine, the famous K-1960, went into operation with the launch of three missiles at once. The author was lucky to be a direct participant in those memorable events.

The first experience of the underwater launch was fully used in the development of the Miassky design bureau of machine building under the guidance of the general designer Viktor Makeev of the P-27 rocket for the underwater launch. Her tests began on February 24, 1962, with a launch from the submarine of the 629 project near the island of Kildin in the Barents Sea. As one of the testers, I took part in this and subsequent launches. This was the beginning of a series of submarines with missiles launched from a submerged position.

Tasks of the starting team

The rocket was an upgraded version of the P-11FM, which was in service with diesel boats. In September of this year, the first launch of such a rocket from the B-67 submarine turned 60 years. The modified and reinforced version passed the stages of bench tests, then began to launch from the submarine. Two attempts were unsuccessful, and in the course of the first there was a unique situation. After all the necessary operations on the boat, a launch was made, the launch team decided that everything was in order and the commander reported to the leadership of the support ship Aeronaut that the rocket had gone. From there they reported that the flight was not seen. To understand what happened, the boat moored to the "Aeronaut". They opened the mine hatch and were amazed to see that the rocket was still in it. About an hour later, while deciding what to do, her engine suddenly turned on and a start occurred. On the cabin of the boat and in the water it was unimaginable. By luck, no one was seriously hurt, because due to the small inclination of the rocket, the engine torch only slightly burned people. 10 September 1960, all preparatory operations and the launch of the rocket passed without comment.

The first atomic bomber K-19 was prepared in the workshop at Sevmash enterprise for a relatively long time. The launch team was daily in the workshop and on the boat in the 4 missile compartment, preparing and checking the equipment. Nothing new - everything is familiar from diesel boats. But, of course, the atmosphere was unusual. In addition to the regular team, developers were also present, so the boat was quite crowded. Our mindless, if not worse, attitude to the rules of radiation safety was remembered: at the entrance to the workshops and at the exit there were racks of control of the dialed doses, which required some time to stand for measurements. We have always famously stepped over them. Subsequently, several people from V.P. Makeev were urgently sent from Severodvinsk because of higher doses. For many of us, this all affected later.

“While deciding what to do, suddenly the rocket engine turned on and a start occurred. It was unimaginable on the cabin of the boat and in the water. ”
During the sea trials of the K-19, including diving to the utmost depth, due to an alarm, I accidentally put on a technical test supervisor's jacket and found an encryption draft on the shore in my pocket, which read: “The 2 circuit appeared, continue testing”. I keep it still.

The launches of three missiles from the K-19 nuclear submarine were conducted by the launch team in the first half of November 1960, first with one P-13 missile, then with two volley. Everything went well, so the missilemen didn’t remember anything special, except that it was our first nuclear-powered rover. I considered this boat to be my own, followed its fate and was very worried about the tragedies taking place on it.

But today we need to remember not only about them, but also about the pace of construction, testing and commissioning of boats that is absolutely unthinkable for the present time. From November to December 1960 of the year, the first three nuclear-powered rocket ships were commissioned. And that's not counting diesel boats. There was no such thing in the world either in those years or later. At the same time, the state flight tests of ballistic and cruise missile complexes and test launches from serial batches took place in parallel at the test site.

Everyone experienced enormous overloads, but we were young and full of energy, loved our profession, living and working in the midst of special people and feeling in this connection a tremendous spiritual upsurge, realizing that we were the first to be at the forefront of the most important scientific and technical achievements.

NPS on the conveyor

The starting team at that time consisted of four people: the commander, the officer providing the work of the integrated training scheme and the entire sequence of recruiting commands and the set of readiness for launch, the officer responsible for the operation of the system of refueling the missile with components of the fuel from the boat tanks pointing the rocket at the set target that was entrusted to me. 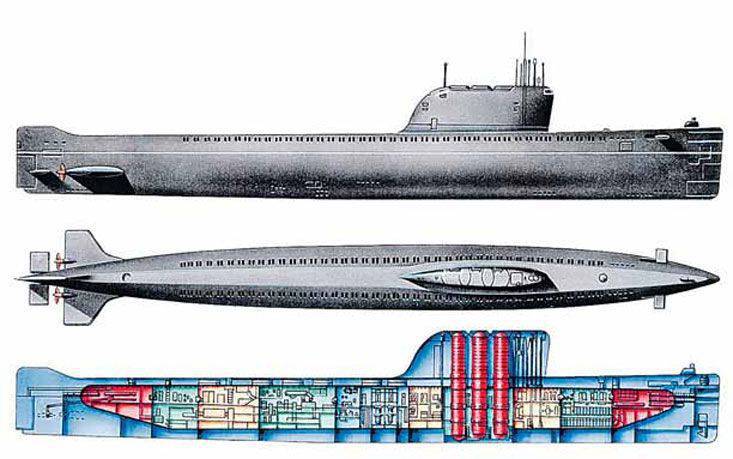 My task, in particular, was to put the rocket on the base as precisely as possible in a horizontal plane. To do this, my team brought me from the mine (necessarily at night to hide what was happening from prying eyes), then I climbed the ladder to the hatch under the head, unscrewed the bolts, removed the hatch and attached a special theodolite to the onboard equipment. After that, he gave commands down to the turns of the launching pad with a rocket until the deviation from the plane became minimal. It was not easy to do all this in extreme cold, when it was still necessary to record all instrument readings in the dark with petrified hands.

During launches, it was necessary to be in the fourth (missile) compartment of the submarine at its equipment, to monitor the current values ​​of its coordinates, to be corrected manually in the event of their deviations during prolonged operation and overheating from those determined for the starting point.

The submarines at the Sevmash enterprise were lowered one by one; in the process of sea trials, we conducted control missile launches. On boats before and after start-ups usually had to be for a long time. The launch team was removed from the board very quickly only in cases of emergency launches, primarily at the request of counterintelligence officers to find out whether there were no deliberate actions. And only then did they analyze the technical causes of the accidents.

In those years, a wonderful atmosphere developed at the training ground. Perhaps this is one of the main and brightest periods in my life. Most senior officers were participants in the war, while respecting us, the “green” lieutenants. They turned exclusively to "you", by name and patronymic. Only after a closer acquaintance did the senior bosses allow themselves to call us by name, but not call out by name. Then it seemed a natural continuation of Russian traditions fleet. Now this seems an unattainable ideal.

We also had to have individual conversations with the head of the testing range of Hero of the Soviet Union Ilya Alekseevich Khvorostyanov, his deputy for testing, Fedor Petrovich Sorokin, as well as with the heads of departments Yevgeny Yefremovich Shurmelev, Vasily Ivanovich Lyamychev. Everyone was talking calmly, without any shouts and poking.

My first boss is the captain of the 2 rank, Yevgeny Matveyevich Kashintsev, a war veteran, a naval officer, an intellectual of the highest standard, taught me a lot, above all the processing and analysis of telemetry data, the preparation of flight missions for missile launches. He talked about so unusual episodes that occurred during the war during the reception of ships under Lend-Lease from the Americans that one should write a separate article about this.

The composition of the starting team was sometimes changed, most often I had to work with the captain of the 3 rank Eugene Pankov. Captain-Lieutenant Alexey Sharov was sitting at the control panel of the complex scheme, Captain-Lieutenant Vitaly Peregudov was in charge of the refueling system. There were other officers, excellent specialists.

The members of the starting team were not only tied up with hard work, during which extreme situations arose, but also true friendship. In the intervals between trials, we went hunting, fishing, for mushrooms, and cranberries.

Pankov captured the war, served in the marines, a decisive, honest officer. Tragically died in the 1962 year after the launch of the P-27 rocket from neutral waters from a submerged position in radio silence mode in calm. A boat floated to inspect the mine and several people went upstairs. At that moment, an American amphibian exited the boat from the Sun’s side and had to dive urgently. Only some time later, they discovered that Zhenya Pankova was not on the boat. Floated, returned to the launch area - in vain. They asked the Americans, whose plane could quickly sit down and pick up a person. Through diplomatic channels, we were told that no one was picked up.

Alexey Sharov perfectly knew the onboard equipment of the missiles and all the systems of the 4 th missile compartment of the boat. We watched with admiration as he remembered, strictly in the calculated seconds of the recruitment, brings the stopwatch to many dozens of burning banners of the complex scheme. Now Alexey continues to work in St. Petersburg.

Vitaly Peregudov - ac refueling systems, exceptionally modest, hardworking, resilient and benevolent person. Repeatedly dealt with the leakage of toxic fuel components, which was noticeable by the color of his face and eyes. After the dismissal, he stayed in Severodvinsk, and we just recently re-established the connection.

When analyzing the causes of accidents, we had to talk with many well-known developers: Nikolai Nikitich Isanin, who called us “arrows from Khvorostyanov”, Viktor Petrovich Makeyev, Iosif Mendeleevich Igdalov and other famous and interesting people of that time who can be remembered and told endlessly. Many of them have already passed away. Light memory to them.

Ctrl Enter
Noticed a mistake Highlight text and press. Ctrl + Enter
We are
D-4 rocket complex with a P-21 ballistic missile16-I Red Banner Squadron of submarines
22 comments
Information
Dear reader, to leave comments on the publication, you must to register.