Over the course of the year, the VPK newspaper published a series of articles by Sergey Ustyantsev, scientific editor of the Ural Carriage Works. The author argued, in particular, that tank the Wehrmacht armada lost outright to the Soviet tank crews also because the German “defense industry” made a strategic mistake by biasing towards the creation of heavy and expensive tanks and self-propelled guns (Tiger, Panther, Ferdinand and others). It seems that today the creators of "Almaty" are making the same mistake that led Hitler Germany to collapse.

The following data on the labor intensity of the production of T-34 and Panther are given: at the beginning of 1943, our tank made 17 thousand man-hours, and the German one - 150 thousand. It turns out that the “Panthers” of the “Panthers” released by all German enterprises in the 5500 – 1943 years corresponded roughly to the 1944 to the thousands of T-50. 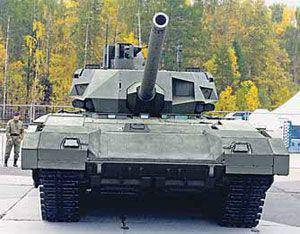 Based on this, it can be assumed that the main German tank of the final stage of the war, surpassing ours by 8,5 in terms of labor intensity, was as much superior to its combat effectiveness. Here is what Ustyantsev writes about this: “If we take the coefficient of the T-34-85 tank as one, then for the Panther it will be equal to 1,5. In other words, the combat value of the three T-34-85 is equal to two "Panthers". For T-34-76, the coefficient is naturally much lower. But if we recall that only one Ural tank factory No. 183 built 1943 tank T-1944-9304 and 34 units T-76-6583 for 34 – 85, it turns out that their total power is at least 1,5 more than all these years are the Panthers. But the “thirty-three” assembled four more Soviet factories ”.

Of course, if modern "Armata" could be produced in the same quantity as the T-90, one could only be happy. But apparently, "Armat" will be much smaller than the tanks of potential opponents. And the thing is primarily in their exorbitant price - 7,8 million dollars. Defenders of "Armata" compare it with 8,5 million dollars, which cost the creation of an American tank МХNUMXА1 SEP "Abrams". This is true. But while America is stronger in electronics, we should not even think about such high-tech tanks. The enemy is just waiting for Uralvagonzavod to rebuild its production lines for the release of "Almaty". Because neither the new generation dynamic protection system, nor the non-proactive active protection, nor the anti-cumulative grids will protect this beautiful toy from, say, the Hook-2 “Hook” with its innovative for hand-held grenade launchers using a target simulator to overcome active protection. At a distance of 30 – 200 meters, this development by the designers of NPO Basalt breaks through 300-mm armor.

Of course, it is assumed that Armata will not allow anyone closer to 200 meters, but everyone understands that in modern armed conflicts, battles are mostly fought in populated areas. Understands this and the deputy director of the corporation "UVZ" for special equipment Vyacheslav Halitov. “Nowadays very few people are fighting in an open area,” he notes in the publication “More than a tank” (“MIC”, No. 36, 2015).

It is not serious to expect that the Russian Federation will not sell Hook for a long time abroad. Moreover, it is unlikely that it will take a long time to wait for an analogue to appear in the West.

The best defense for a tank is to attack and destroy the enemy. Compete with the "Abrams", "Leopards", "Challengers" and "Merkavami" can only be the same as with their predecessors - "Tigers" and "Panthers". "Armata" is trying to compete with foreign counterparts not only fighting qualities, but also at the price of a million dollars in 7,8. American "Abrams", as stated, - 8,5 million dollars, German "Leopard" - 6,8 million, English "Challenger" - 8,6 million, South Korean 2 Black Panther - 8,8 million, Japanese Type-90 - more than 9 million, French "Leclerc" - over 10 millions.

However, some experts believe that the comparison with our cheap T-72 and T-90 is inappropriate. According to, for example, journalist Alexander Plekhanov, these tanks were created for a mass non-professional army. “For their levers,” explains Plekhanov, “ordinary recruits should have sat down. One car will die - three new ones will take its place. “Armata” was not considered as a consumable from the beginning. ”

That is, he relies on the "Armat" indestructibility. I will object: if Armat is much less than its rivals, none of its improvements will help. Our fathers and grandfathers understood this perfectly well, winning both the Prokhorov tank battle and the battle for Berlin.

T-34 became the best tank of the Second World War also because the tradition of the Soviet tank building clearly did not include the corruption component, which today in the Russian market crumbles into dozens and hundreds of co-executives, component suppliers. Everyone wants to grab their share.

By the way, the same Plekhanov proposes to imagine what would happen if the Armata converges in a duel with one or another famous tank. Imagine, but from myself, we add that not with one, but with a flock of tanks, since one UVZ will not do as much as all of Europe and America.

Today we need to think and write not about the fact that for the first time in many years our army gets the best tank in the world instead of conversion pans and vacuum cleaners, but about whether it will be able to win as T-34. The point is not in the unique fighting qualities, but as a result. Unfortunately, many do not understand that success is a component of many factors.

It is possible to congratulate the UVZ, which created such a tank as the Armata, but in today's circumstances it would be better in Nizhny Tagil to focus on the production of the T-90, making them as much as possible. The situation in the country and the world is such that hands may not be able to make Armat in mass production.

Ctrl Enter
Noticed a mistake Highlight text and press. Ctrl + Enter
We are
A great interview with Sergey Lavrov: about Ukraine, Obama and IranWhat you didn't want to know about England
188 comments
Information
Dear reader, to leave comments on the publication, you must to register.