October 7 2015
23
At any exhibition there are not only new exhibits, but also samples already known to the public. At the recent exhibition “Innovation Day of the Southern Military District”, the industry and the Ministry of the Interior presented a promising Ural-VV armored car. This machine has long been known to specialists and the public, but has not yet become a regular guest at various exhibition events.


The armored car "Ural-VV" was developed by the Miass automobile plant "Ural" in the framework of the program "Moto-2". The aim of the project was to create a promising protected vehicle with the wheel formula 6х6. The Ural-VV car was developed by request of the Ministry of Internal Affairs and intended for operation in divisions of internal troops. It is this feature of the project that was rendered in its name in the form of the letters “BB”.

A promising armored car was first shown at 2013 at the Russia Arms Expo in Nizhny Tagil. In the future, the armored cars "Ural-VV" were repeatedly demonstrated at other events. The list of exhibitions in which the exposition was present "Ural-BB", recently entered the "Day of Innovation of the Southern Military District". Thus, thanks to regular participation in exhibitions, the promising armored car for the internal troops of the Ministry of Internal Affairs was widely known among specialists and the public. 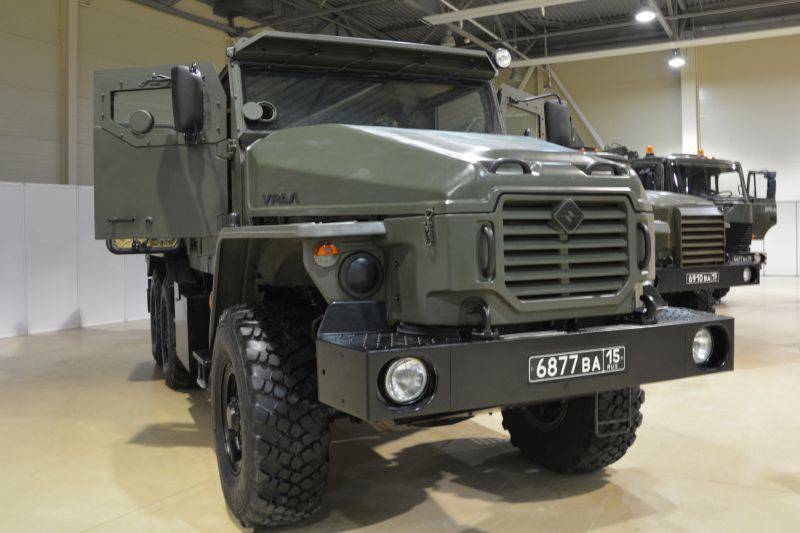 Ural-4320 truck chassis was chosen as the base for the armored vehicle "Ural-BB". This machine went into production a long time ago and was well mastered by the operators, due to which it can be a very convenient and successful base for military and special equipment. The all-wheel drive three-axle chassis is equipped with a JMZ-536 diesel engine with 270 horsepower. Such a power plant in combination with a transmission that provides transmission of torque to all three axes allows the car weighing up to 18,3 t to reach speeds of up to 90 km / h.

The car "Ural-VV" is equipped with an armored hull, divided into the engine compartment and the habitable compartment. The crew and troops are located in the total volume, which facilitates embarkation and disembarkation. The armored hull of the vehicle is designed to protect the crew and units from small arms. weapons and splinters. Inhabited compartment has the protection of 5 class according to domestic standards. Such a reservation can withstand a fire from small arms caliber to 7,62 mm.

Own protection also received the engine, gearbox and a number of other units of the machine. Thus, the engine is located inside a casing that meets the 3 protection class. A decorative plastic hood is installed over the engine armor.

A prospective armored car can carry up to 3 tons of cargo. Its main task is to transport personnel. In front of the habitable volume are the driver and commander. Behind them, along the sides, are installed 15 more chairs for the landing. Thus, in the existing configuration, the Ural-VV transports fighters with weapons to 16, not counting the driver.

For landing, the commander and driver have their own side doors. At the disposal of the landing there is a door on the starboard side and two stern doors. For more convenience, the landing of a relatively high machine under the side doors have steps. Aft doors, in turn, are equipped with a folding ladder. In the stowed position, it rises by means of a pneumatic cylinder and is fixed in this position. Before landing it should be lowered. In addition, several hatches are provided in the roof of the troop compartment.

According to reports, as early as in 2013, the Ministry of Internal Affairs ordered a new batch of 10 armored vehicles from the Ural automobile plant. This order was completed several years ago. The cars of the first batch were transferred to some divisions of the internal troops of the Ministry of Internal Affairs. Currently, all ten armored cars are being tested in the North Caucasus. There is information about the participation of such equipment in collisions with the enemy. Militants tried unsuccessfully to attack one of the machines with the use of small arms. The armored car received some damage, but the crew was not injured: it was protected by armor and glass.

Recently it became known that the Ministry of the Interior is currently working on the adoption of the Ural-VV vehicle for supply. After that, the full-scale serial construction of armored cars will probably start. In addition, there was information that the Ural plant offered its new development to the Ministry of Defense. The military version of the armored car is called the “Warrior”. His further fate has not yet been determined: the potential customer has not yet made a final choice. In the future, the first export contract is expected.

One of the ten existing armored vehicles "Ural-VV" was presented at the exhibition "Innovation Day of the Southern Military District". We present a photoreview of the shown armored vehicle. 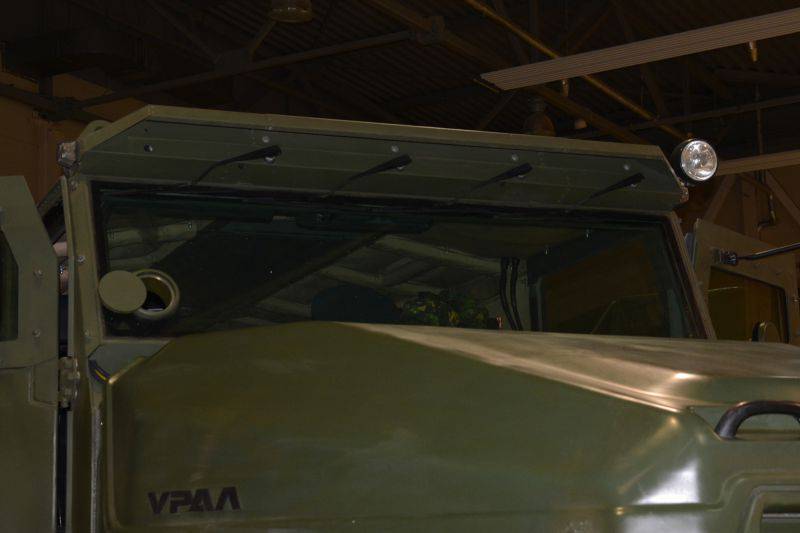 Frontal bulletproof glass with an embrasure for firing from personal weapons 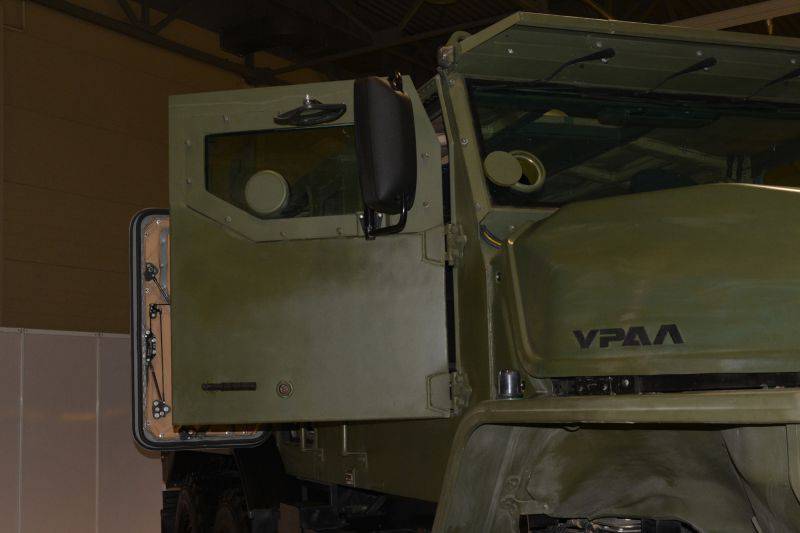 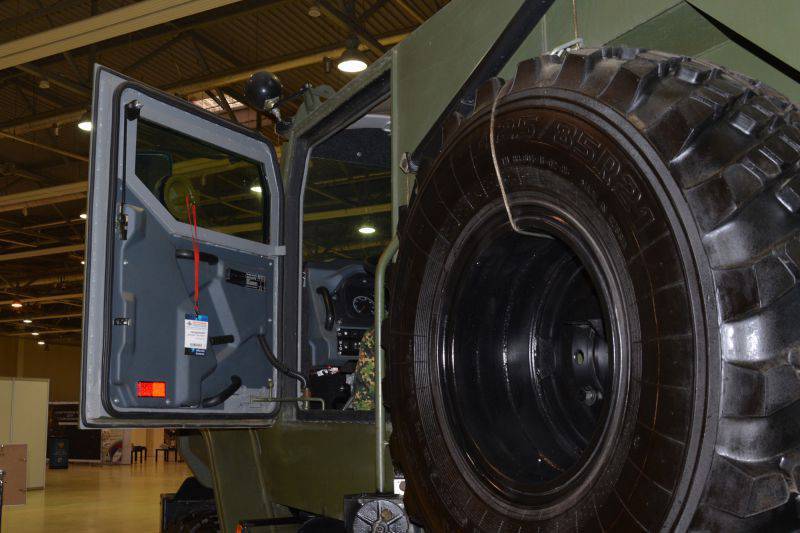 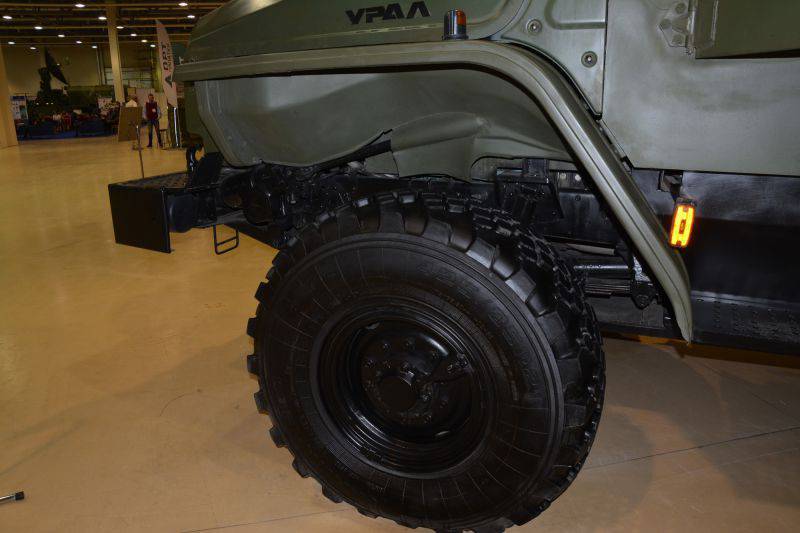 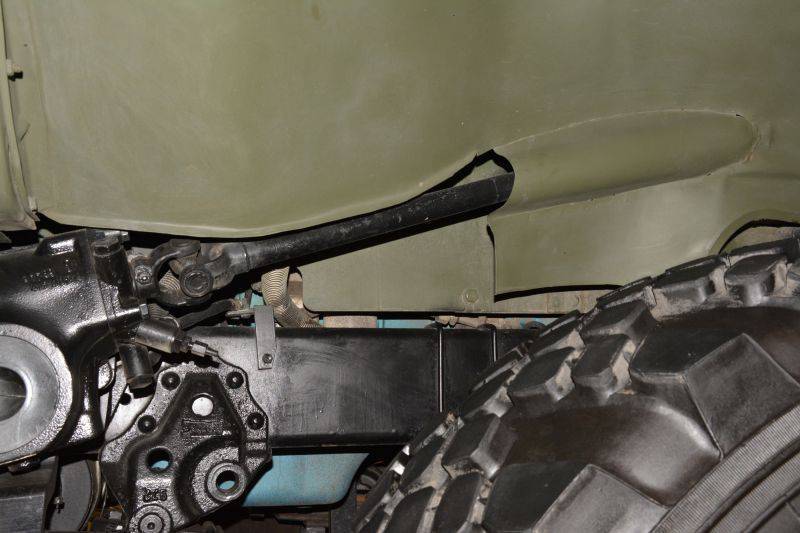 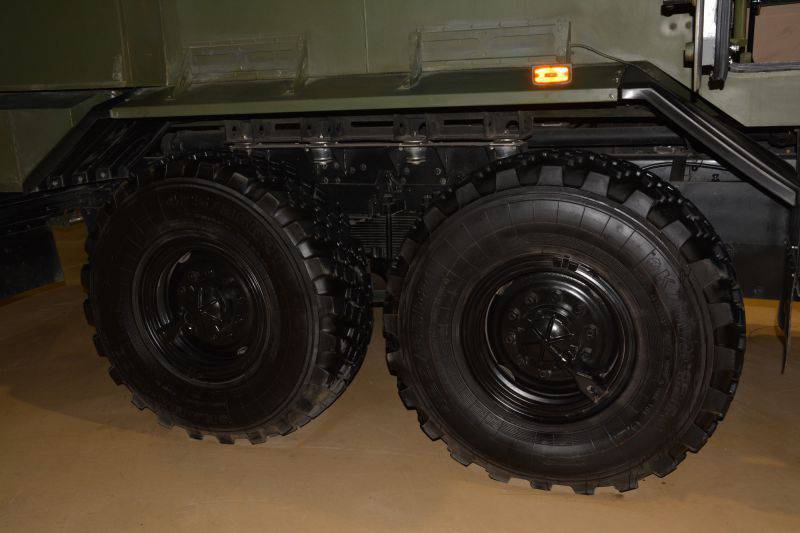 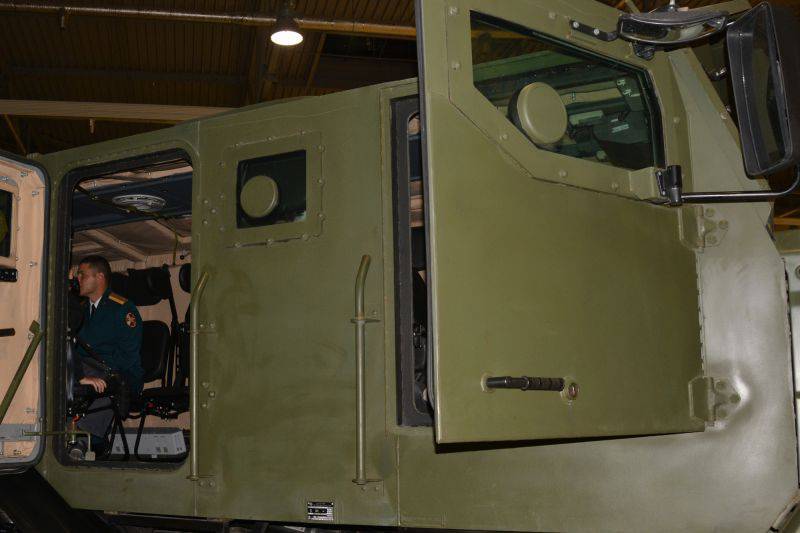 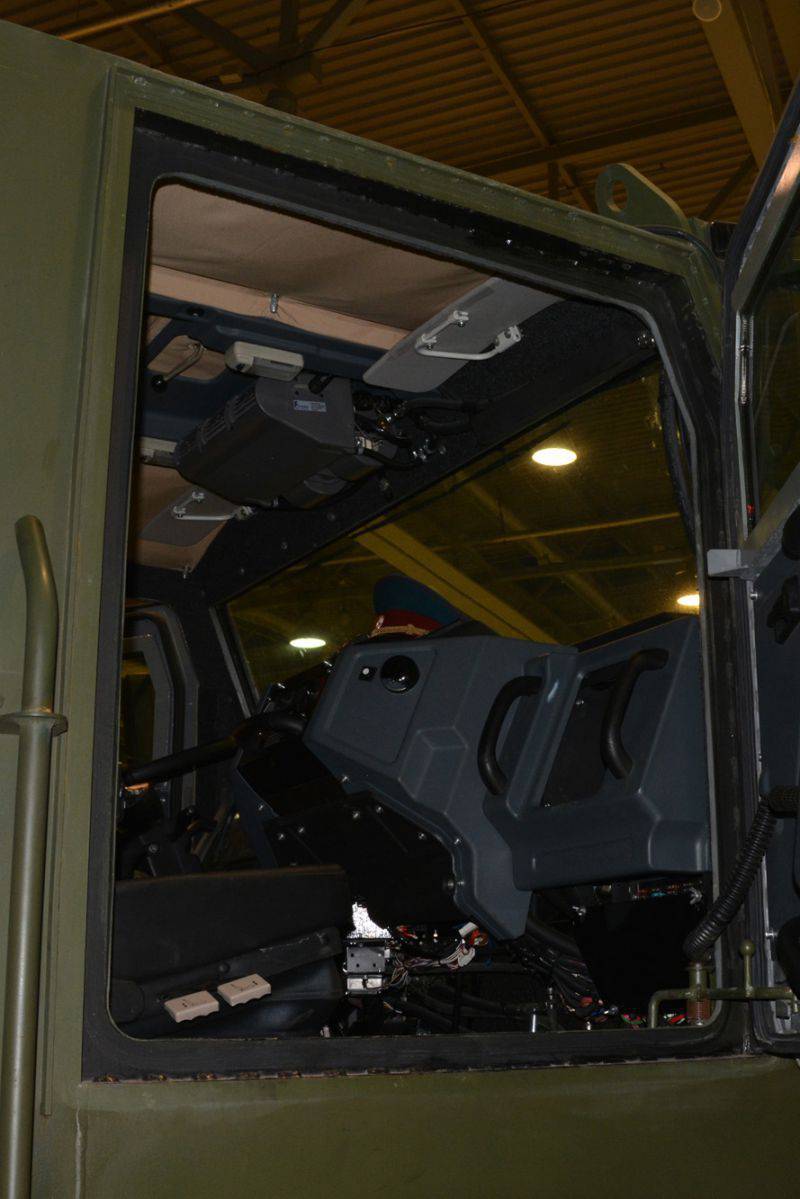 View of the place next to the driver 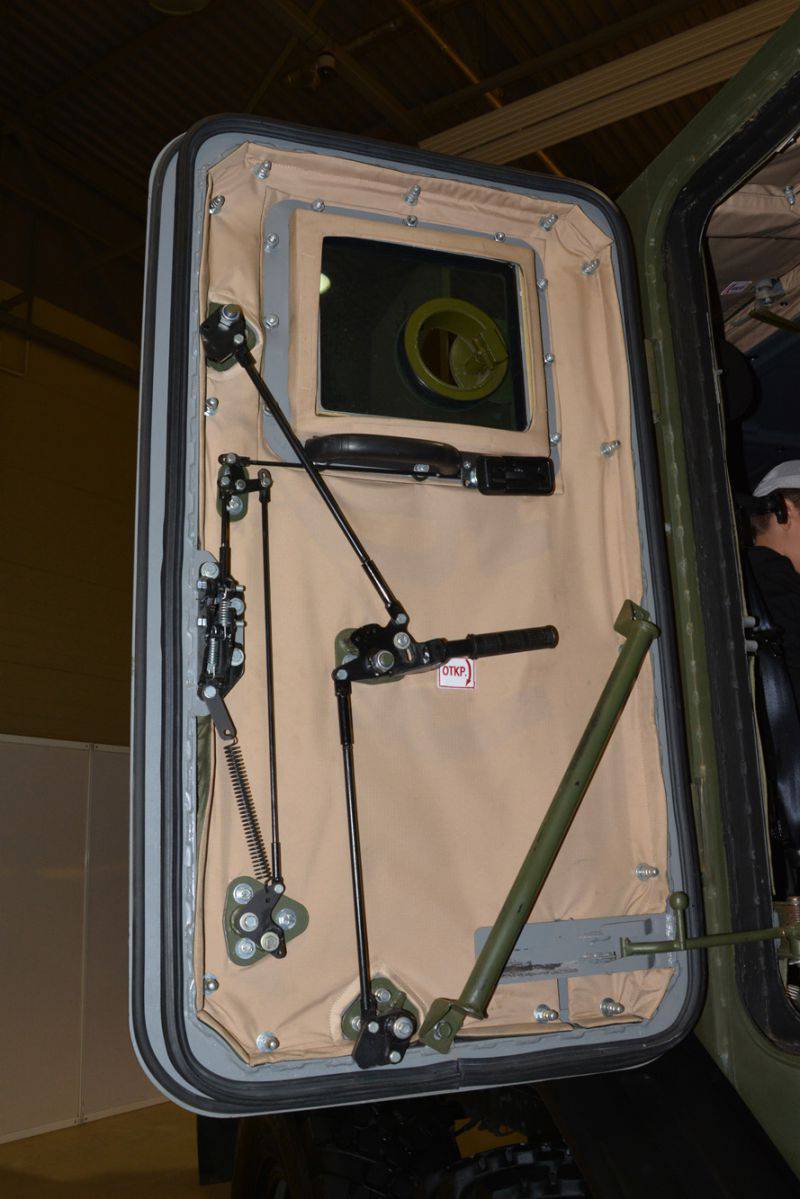 All doors of the armored car have a similar design and are equipped with the same locking devices. 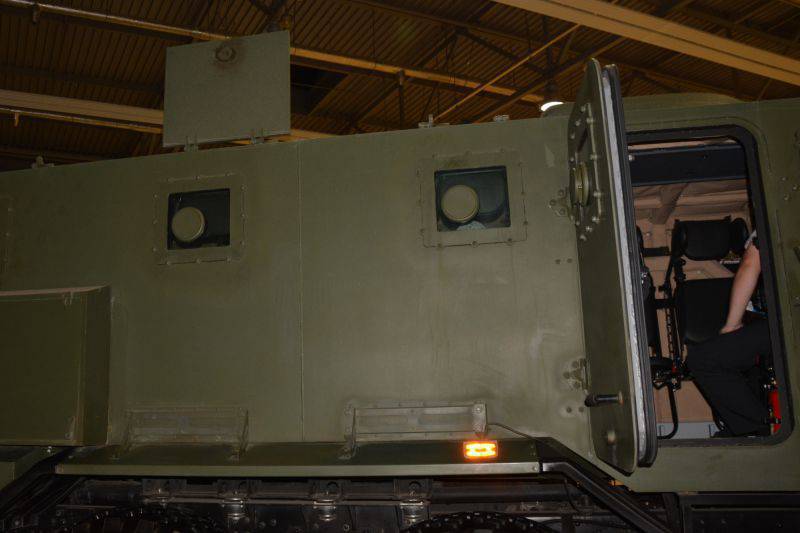 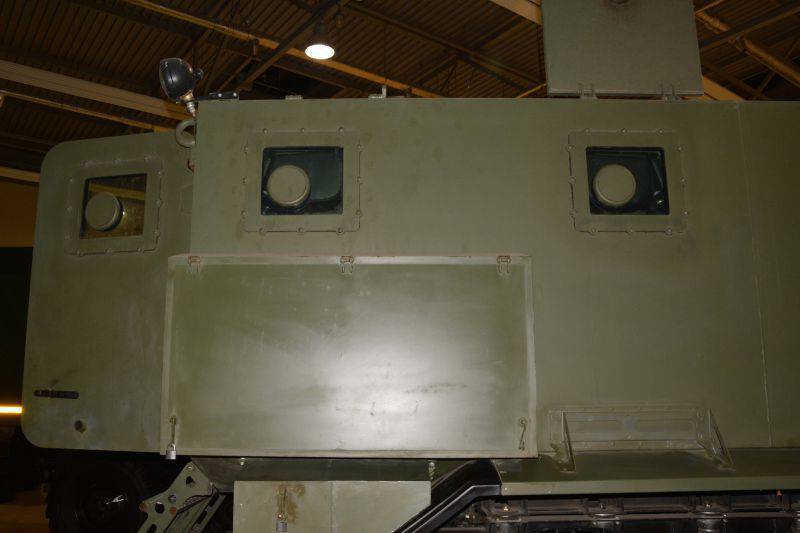 On the sides there are windows with embrasures. Also all the doors are equipped with loopholes. 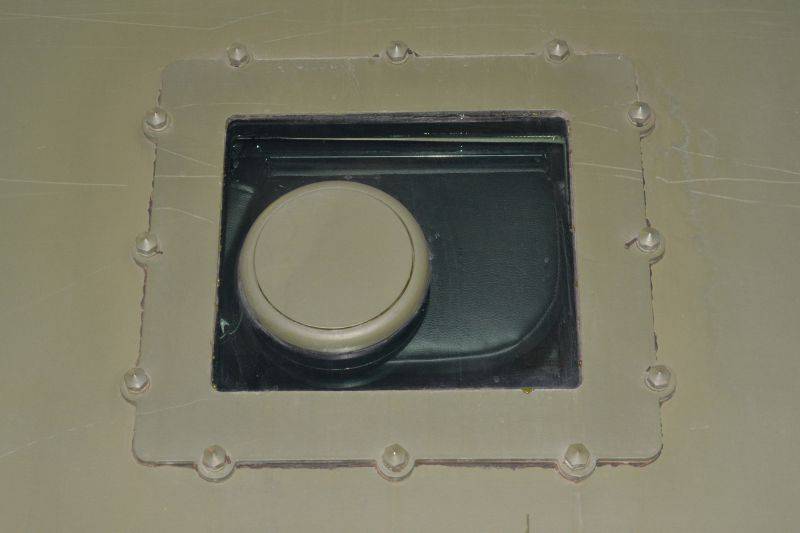 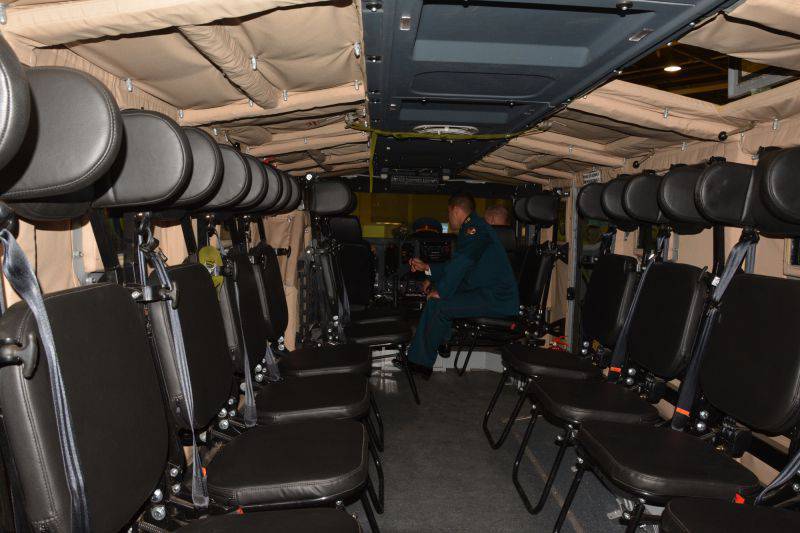 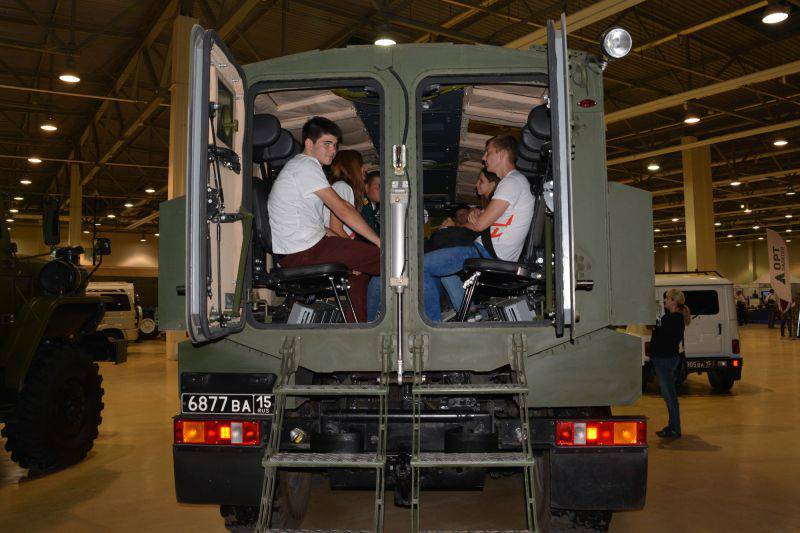 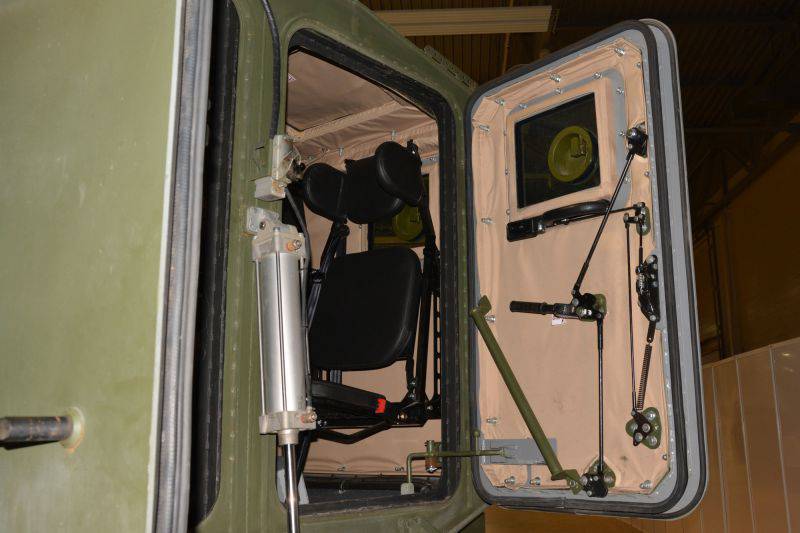 One of the stern doors. The ladder pneumatic cylinder is clearly visible 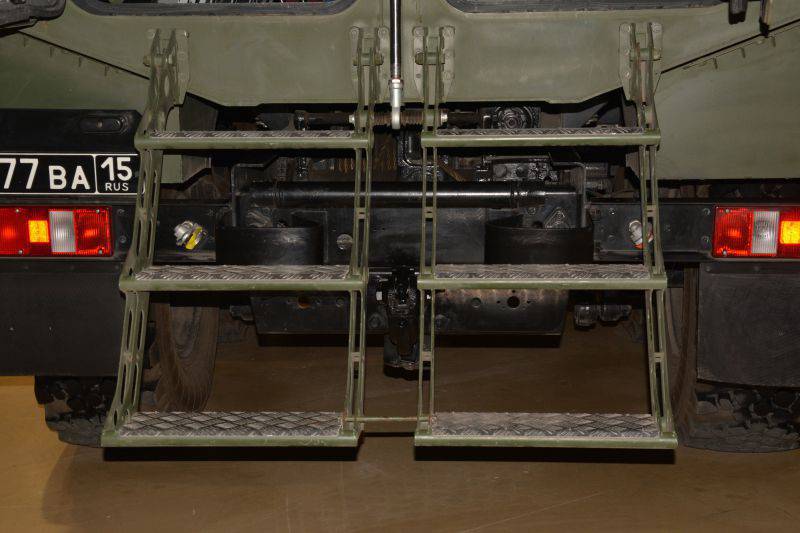 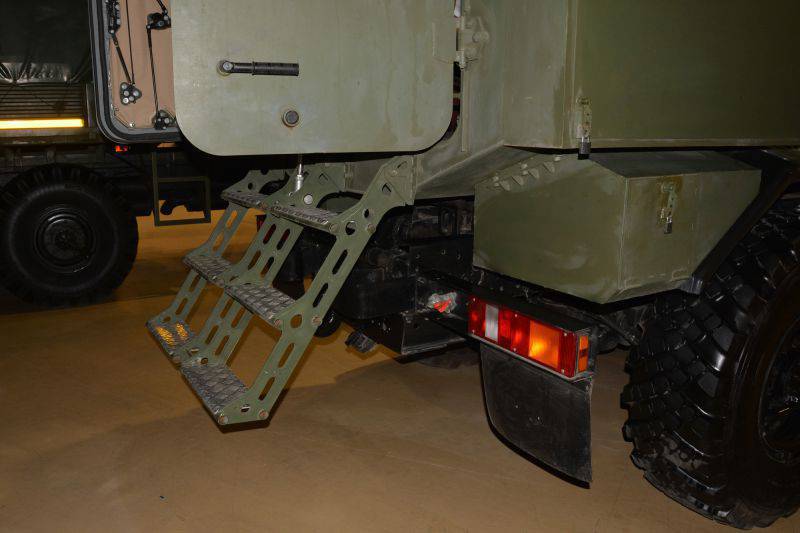 The landing is carried out with the help of a folding ladder with pneumatic drive.

Behind the driver's door is a niche for the spare wheel. 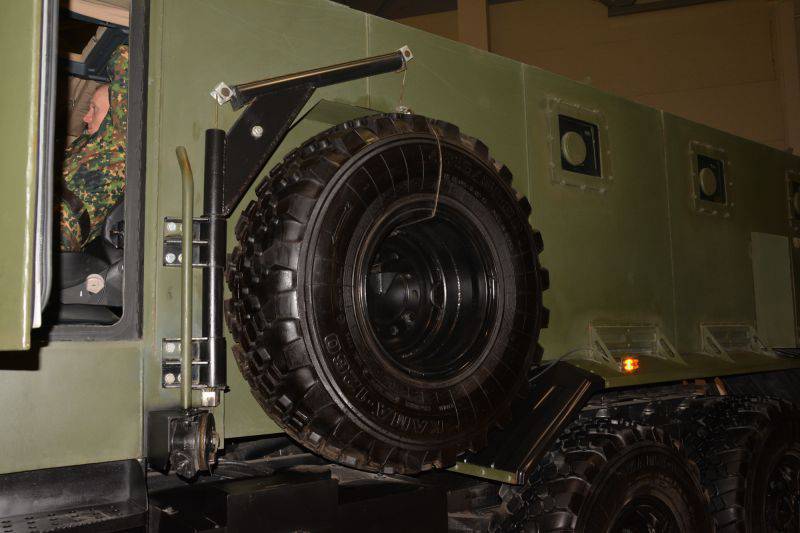 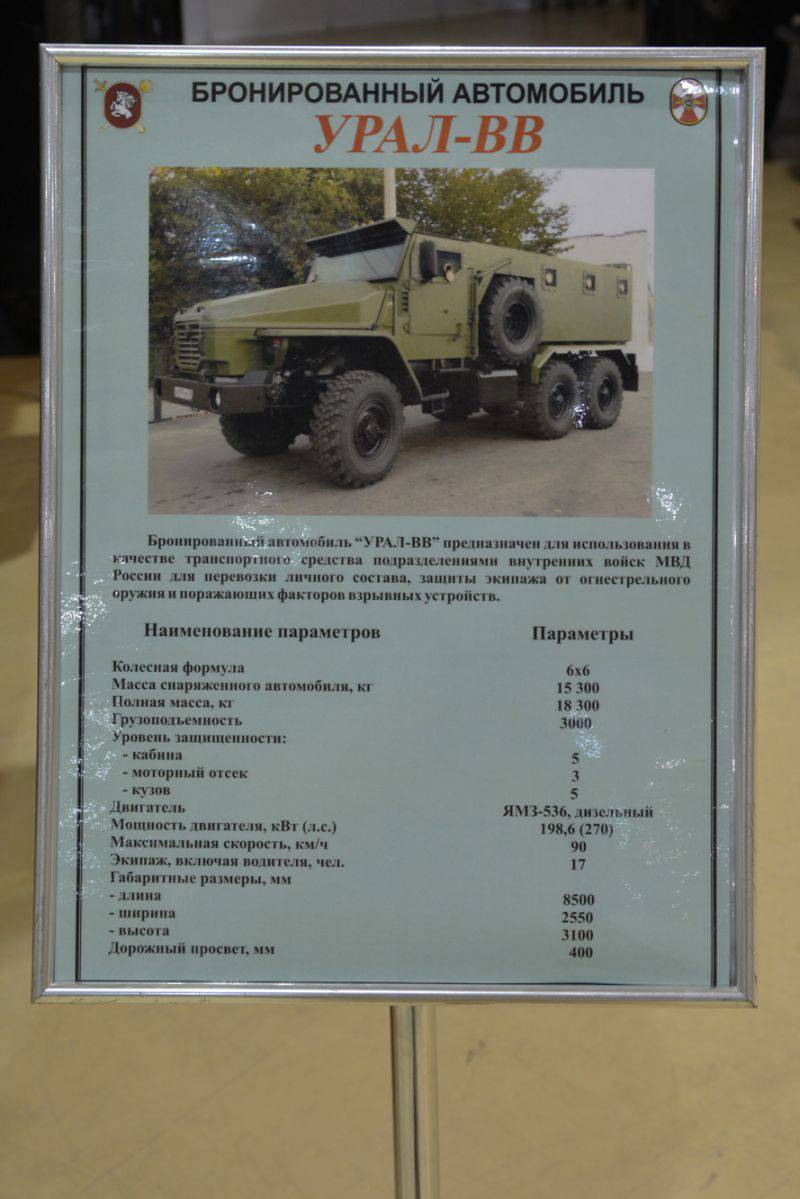