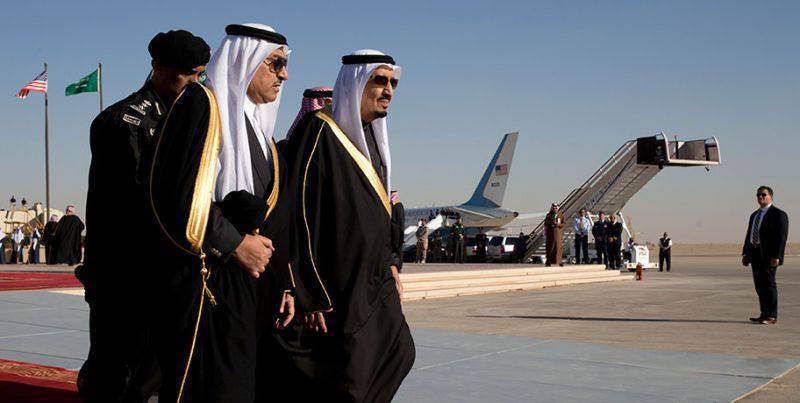 Arguably, the Persian Gulf countries, the most implacable opponents of Bashar al-Assad, reacted most harshly to the rocket-bombing attacks of Russian fighters on the positions of insurgents in Syria. Political scientists and experts predict that they, along with Ankara, will most likely dramatically increase the military and financial support of the opposition.

Regional states of the Middle East, secretly, trying not to attract attention, but efficiently supplied money from the very beginning of the civil war in Syria, weapons and provided other assistance to opposition groups fighting against Bashar al-Assad. Thus, they take an active part in the conflict, the essence of which for them is, of course, not the regime in Damascus, but the fight against the main enemy in the Middle East - the Shiite Iran supporting the Assad regime.

Despite the recent significant softening of attitudes towards President Assad by the Western powers, the flood monarchies and Turkey still categorically demand his departure from the political arena and declare the impossibility of reaching compromises on this issue.

"For Assad, there is no future in Syria," said Saudi Foreign Minister Adel Al-Jubeir a few hours before the first Russian strike in northwest Syria. For those who are particularly slow-witted, he added that if Assad does not leave on a good, voluntary basis, then Riyadh is ready to resort to a forceful solution to the Syrian problem.

“Russia's intervention is a serious obstacle for those countries that support the Syrian opposition,” explained Guardian Julien Barnes-Darcy, an analyst at the European Council on Foreign Relations. “Especially for Turkey, Saudi Arabia and Qatar ...”

Riyadh podderivayut opposition in the south of Syria, while Turkey and Qatar help the opponents of al-Assad, fighting in the north. Among the numerous groups supported by the Sunni states, Islamist groups such as Ahrar al-Sham stand out. Recently, she, together with the "Front of Nusroy," concluded a truce with government forces in northern Syria. Many observers believe that it is the successes of these two Islamist groups that forced Moscow to intervene in the Syrian conflict.

There is very close cooperation between Ankara and Doha in Syria. They act as allies.

In recent months, support for Turkey, however, has weakened somewhat due to internal turmoil. However, both Saudi Arabia and Qatar, which, like all other oil-producing countries, are experiencing a fall in oil prices, have put off hundreds of millions of dollars to support the anti-Assad opposition. Political analysts agree that the intervention of Moscow in the conflict will only strengthen the desire of the opponents of Assad to "dump" him.

However, the financial and, especially, the military capabilities of these two monarchies are severely limited by the very expensive operation in Yemen. They are hampered by the comprehensive support of Islamist groups and the West’s ban on the delivery of precision weapons to the region. In America and Europe, they are afraid that it will fall into the hands of the IG, as has already happened many times with modern American weapons, which were handed over by Nusra’s opposition fighters trained by American instructors.

Observers say that the reaction of the Saudis will sharply increase if they see that further strengthening of Iran’s position in Syria. It may well be about sending troops to Syria, but only if by then the war in Yemen is over.

In Riyadh and Doha, they believe that by strengthening the support of the opposition, they will be able to show Moscow that the possibilities of Damascus, even with the support of Russia and Iran, are limited.

In the Persian Gulf they are very dissatisfied with the direct intervention of Russia in the conflict in Syria, but nevertheless they are trying to extract at least some benefit from it. In the complex geopolitical chess game, which is being played now in the Middle East and primarily in Syria, every nuance is important. In Riyadh and Doha, with all the denial of Russian actions aviation in Syria they understand that the stronger Moscow’s influence in Syria becomes, the weaker Iranian influence there will be. Who knows, maybe the Arab monarchies, having weighed all the pros and cons, decide to enter into an alliance with Russia in order to oust Iran from Syria and, if possible, Iraq.

As for the main player in the recent past of the player in the Middle East - the United States, his influence and this is well understood, even in Washington, has lately been greatly weakened. The turning point was the conclusion of an agreement with Tehran on the Iranian nuclear program.

Americans, of course, do not intend to give up their positions to Russia in the Middle East without a fight. Washington intends to intensify its own war with the "Islamic State". The American-led coalition plans to open a large front of hostilities in northeastern Syria in the Raqqa region, the Syrian capital of the self-proclaimed Baghdadi Caliphate.

Last week, President Obama ordered the Pentagon to directly supply the Syrian opposition with equipment, ammunition and, possibly, weapons. In addition, he ordered to intensify the air war against jihadists from the Turkish military air bases. This is supposed to allow 3-5 thousand opposition members to join roughly 20 thousand armed Kurds and go on the offensive with strong aviation support from the anti-jihadist coalition.

Pentagon chief Ashton Carter said Monday that the US and its allies will take the necessary steps to counter Russia in connection with its operation in Syria, while the US remains open to cooperation with the Russian Federation, the Bloomberg news agency reported.

"The US and allies will take steps to counter Russia. Russia's actions have led to an escalation of the war in Syria. We urge Russia to act safely. We are open to further cooperation with Russia," Carter said in a statement he made during his speech in Madrid.